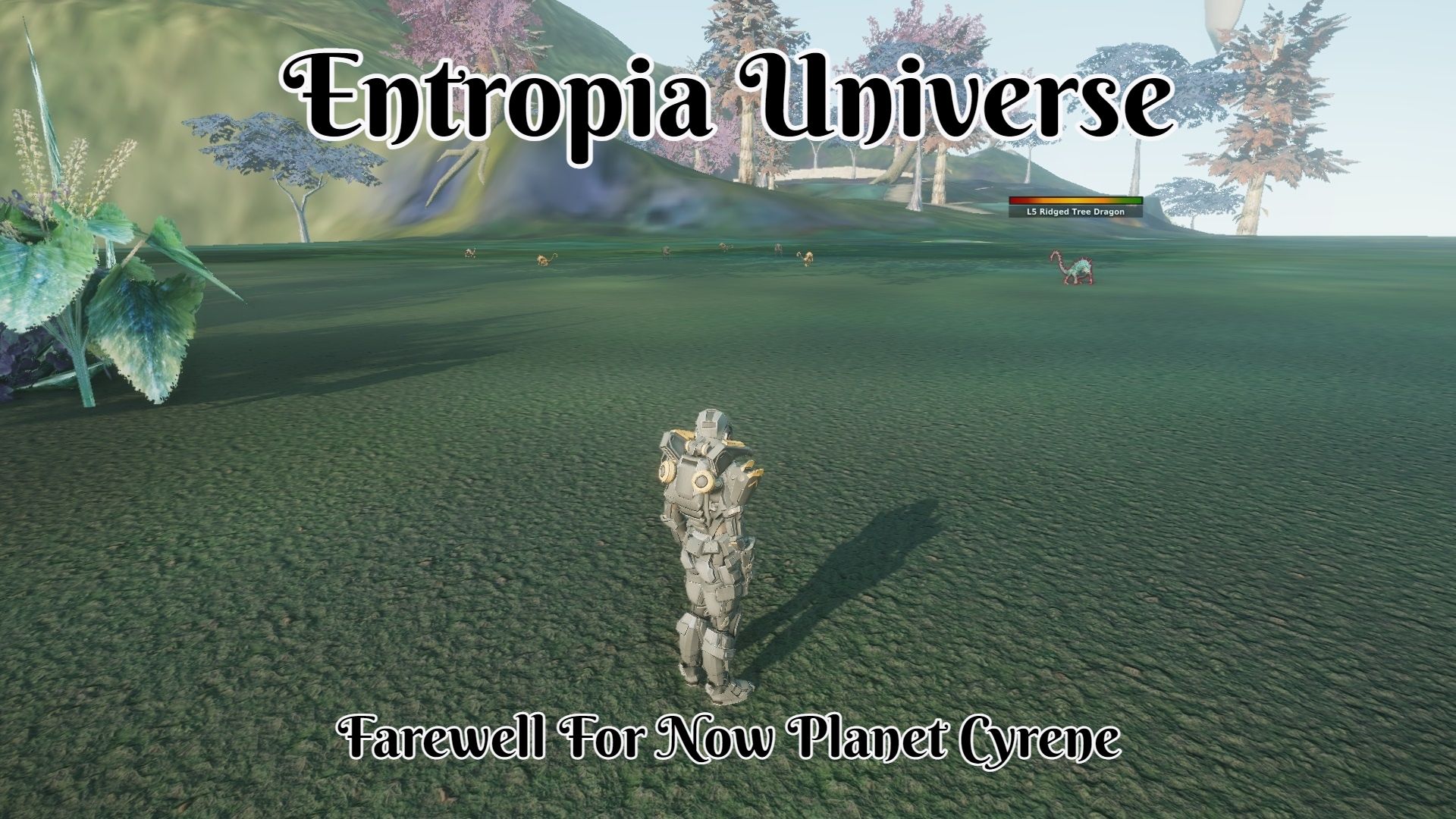 It was finally time to say farewell to planet Cyrene in Entropia Universe. I ended up staying a lot longer than I was expecting that was for sure. It was however fun albeit a bit of a long grind with some breaks on occasion.

There were quite a few things I had set out to accomplish while on Cyrene. Some of them I’m happy to report was a complete success. Others not so much but not for my lack of trying. Perhaps over the long run, I’ll be back to finish what I leave unfished for now.

I had somewhat of an idea of what I wanted to accomplish on that fateful day I left for planet Cyrene that almost feels like a lifetime ago. It had been quite a lot longer trip than I was expecting.

There were also some other things I ended up wanting to work on along the way.

One of the first things I ended up doing was exploring the planet. Trying to get as many random missions and waypoints to teleporters as I could. Later I might have gained another teleport or two locations I ended up doing a decent job early on.

I also found a lot of missions that helped me try and understand the madness of being on a planet I had very little experience with. I believe I have in the past been here briefly quite many years ago. That however would not have been for any decent length of time.

I ended up early on coming up with a planetary wide strategy for tackling Cyrene. I noticed early on the opportunity for mission stacking along with combing other goals I had in mind. This allowed me to get a lot more things done cheaper and quicker in terms of those aspects. Cutting down on needing to repeat the same activities over again. 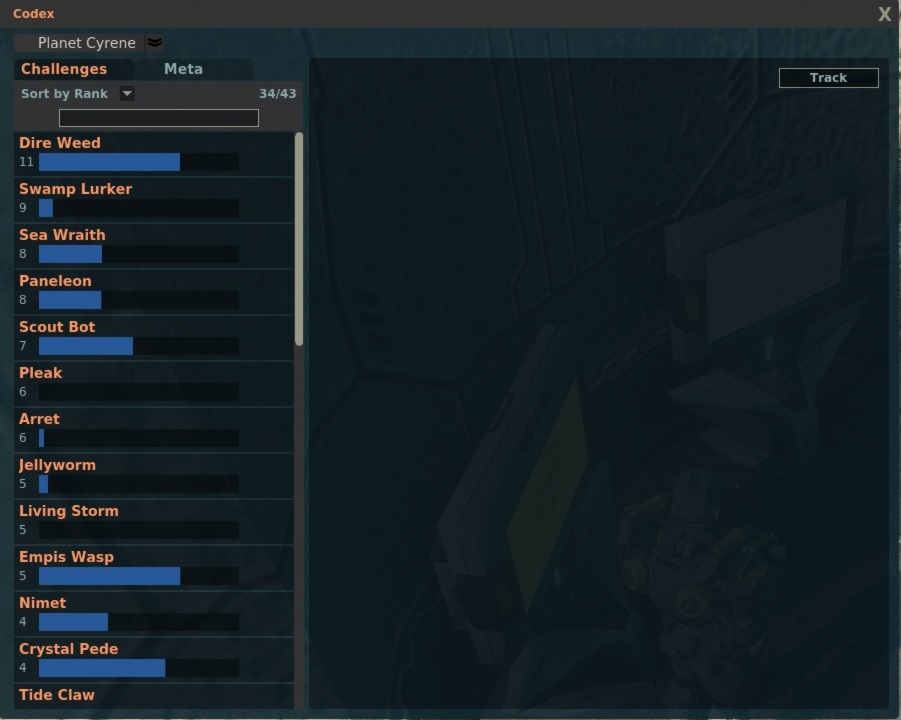 I also put a decent-sized dent into the Cyrene Codex. I surprisingly did not end up going on as many long hunts as I was expecting. Where I would usually focus a few hunting trips on just a single creature at a time.

It would have been nice on this adventure to have gotten a few more creatures to at least rank 5 in the codex. It quickly became apparent to me that the budget I had set aside was going to need a more heavy allocation elsewhere with my time spent on Cyrene. It at least helped me gain a lot of skills and some Meta ranks as well.

Instead, I ended up going on routes hunting a few different creatures in a single sitting. That was because I discovered I needed to acquire at least 300 A.R.C Faction Badges for one of my goals. I ended up running 5 daily missions hunting 5 different creatures. This was my main push for completing a decent amount of the A.R.C Badges I needed.

Later on I would expand into crafting and mining. Along with finishing the bulk of the single kill mission that awards A.R.C Faction badges as well.

While mining was an expected activity I was looking to do while on Cyrene. Crafting on the other hand came to me as a total surprise. I ended up acquiring quite a few crafting blueprints that I wanted including Cyrene Acid Armor Plate (L). One blueprint that still eludes me however is Protective Coating. While I could have bought it at the auction house it was selling for a lot more than I wanted to spend.

Mining was an amazing win for me during this entire adventure. While I did not create content around all my mining runs a few of them I did. Such as getting a HoF which I was not expecting along with a few other global during my many runs. 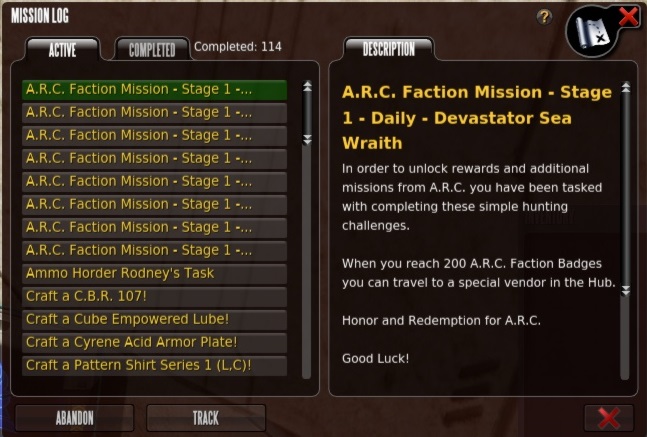 I also ended up doing an insane amount of missions. My mission log shows 114 competed. It must not be including daily missions as those alone would have been over 200 by my best guess. Many of these missions were things I wanted to accomplish while on Cyrene. Some of those missions ended up being a part of a mission chain to acquire the FAP I wanted to be called a Refurbished H.E.A.R.T Rank VI. Many missions in that chain upgrade the rank of that healing device. I wrote about it in some detail in New FAP Collecting Part and New FAP Kill Missions.

One thing I am quite thankful for is solving the issue of getting loot back to Calypso in an attempt to have a better chance at selling it. I ended up finding an active secure transportation service that was not only the oldest but the best that was ever created in the game due to how rare the ship that is involved in it is. It was quite reasonably priced

Since I ended up staying beyond a week here I originally planned. I ended up using that transport service several times. There would also be instances where I would fly back to Calypso empty of loot for restocking, doing things on Calypso, and relisting items on the auction house.

I ended up working on quite a few of my goals over many months regarding Cyrene. It was not every day I was able to log in. Sometimes if I was able to play I’d be elsewhere in the universe and unable to make it back for a few days. At least when I did make it to being on Cyrene I was usually able to knock something out when I could. I ended up finding where the mission for the Maze Hammer and at the cost of only 5 PED of shrapnel I acquired it. 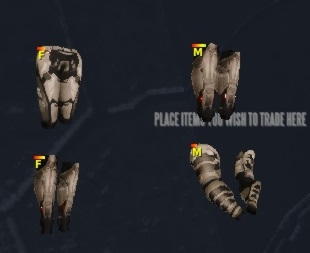 However, not everything I wanted to complete ended up getting finished this time around. I ended up hunting a lot of Paneleon hoping to get a full set of A.R.C Guardian Armor (M) to drop. Instead, I only looted four pieces and two of them are for females only.

While they are cheap to buy I still might end up farming a lot of Paneleon at some point since I need so many of their drops. The overall plan was to get the gear drops and then upgrade them into Paneleon Imperial armor.

That however required 500 A.R.C Badges which I’m short around 190 on. It also requires some rare and extremely rare drops per piece per upgrade. Putting the costs to do so sadly out of what I could afford to do even If I had the 500 A.R.C Badges farmed up.

Once I learned that was going to be the issue I instead focused on the Cyrene plating. I at least wanted the first upgrade for Imperium Officer Plate. I did acquire all 7 Imperium Armor Plating I from missions. I then got up to the 300 A.R.C Badges required and acquire some materials to do so.

The issue came down to needing to upgrade 7 Imperium Armor Plating I to the next tier to make a full set. Over half the cost was going to be Tail Tips for the process. I even went on a few Paneleon hunts to see if I could end up getting them myself cheaper than buying them. That ended up not being the case.

At the very least I did end up acquiring a lot of starting items and other goodies including a new vehicle. Most of them were so cheap to acquire they were “free.” Some of them I’ll use myself while others I’ll just toss into storage for a rainy day.

Along the way, I did end up finding some unique things Cyrene had to offer. I have never been a huge fan of parkour platformer challenges there were several to run at least daily for rewards. I also ended up finding an area trying to create a unique experience as a PvP hub of sorts. 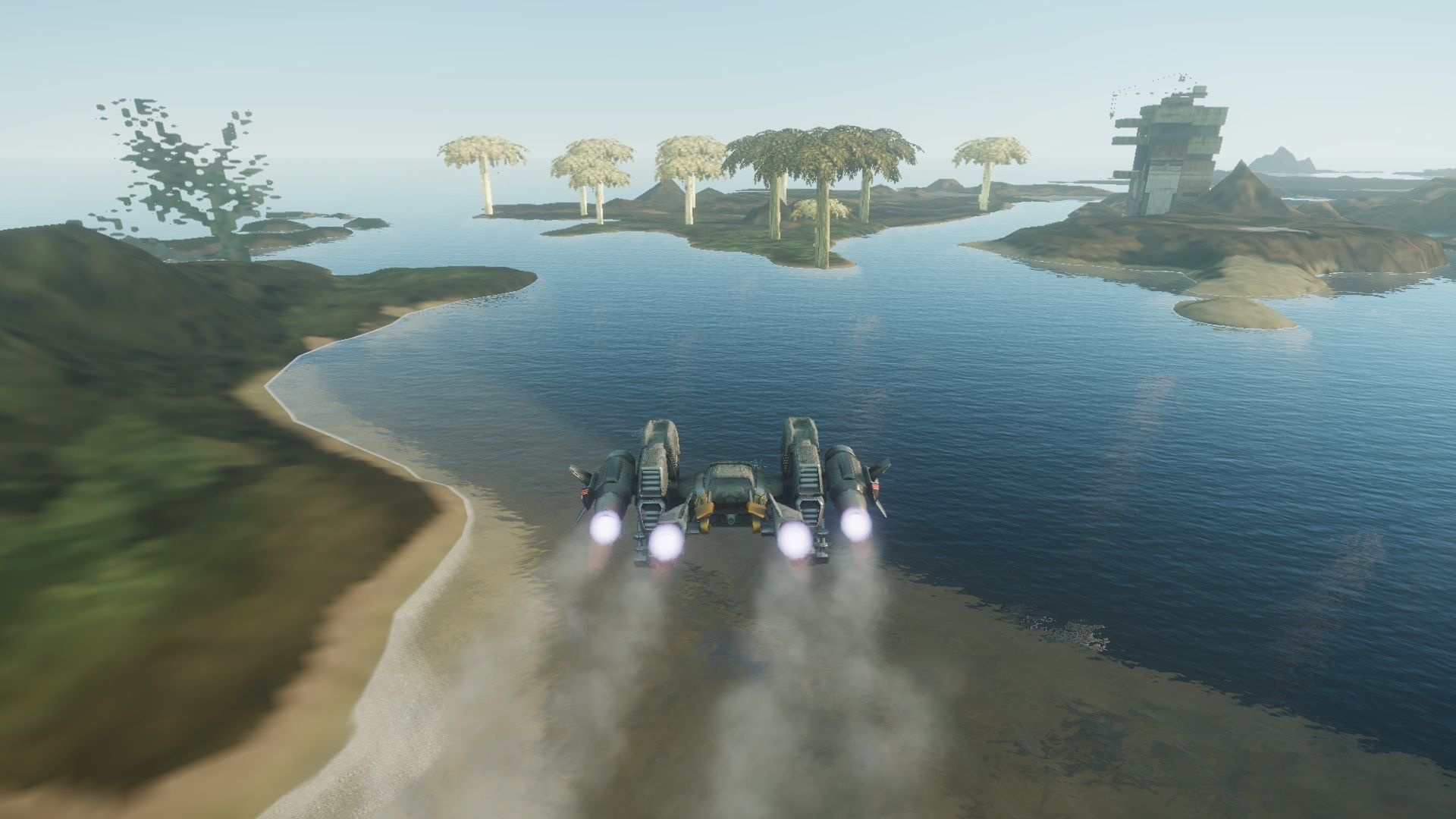 Overall it was quite an amazing adventure I went on to Cyrene. It is one of those experiences I’m going still be professing and thinking about in the coming days. Hopefully, at some point, some amazing updates will come out and I’ll be making way my back to work on new and old goals.

The screenshot I took for the cover of this post was one of the last creatures I hunted apart from farming more Paneleon. I ended up being one kill short on the codex for it to get another rank up. So I ran out and got that rank. What a way to end things.