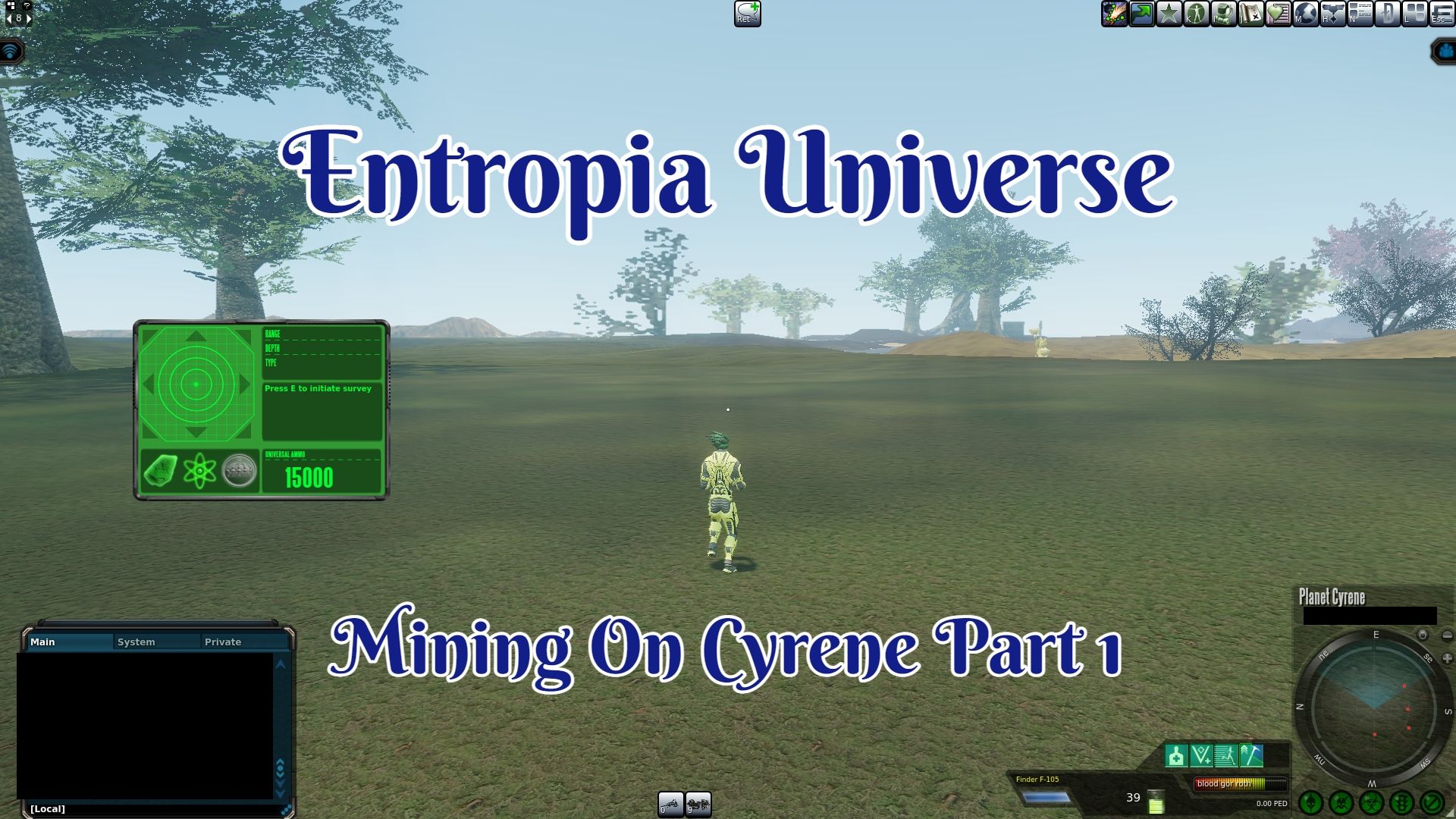 I have never mined on Cyrene before and outside of some context clues by NPCs of what can be found on this planet I’m mostly going in blind. The size of the planet will both be a positive and a negative as I search around it trying to discover where to mine. A lot of missions I have or things I want to do require mining material.

With Cyrene being better thought out than some other planets and areas in Entropia Universe that I’ve been to. There is a bit of need including for myself the ore and enmatter specific only drops that you can mine for on Cyrene.

On other planets like Calypso, I have quite a few different places to get some broad information from or people to give me a general direction. I don’t know much about how this planet will mine. What I lack in those is the finer detail even when I had some information to go off that I needed to go out myself and discover. 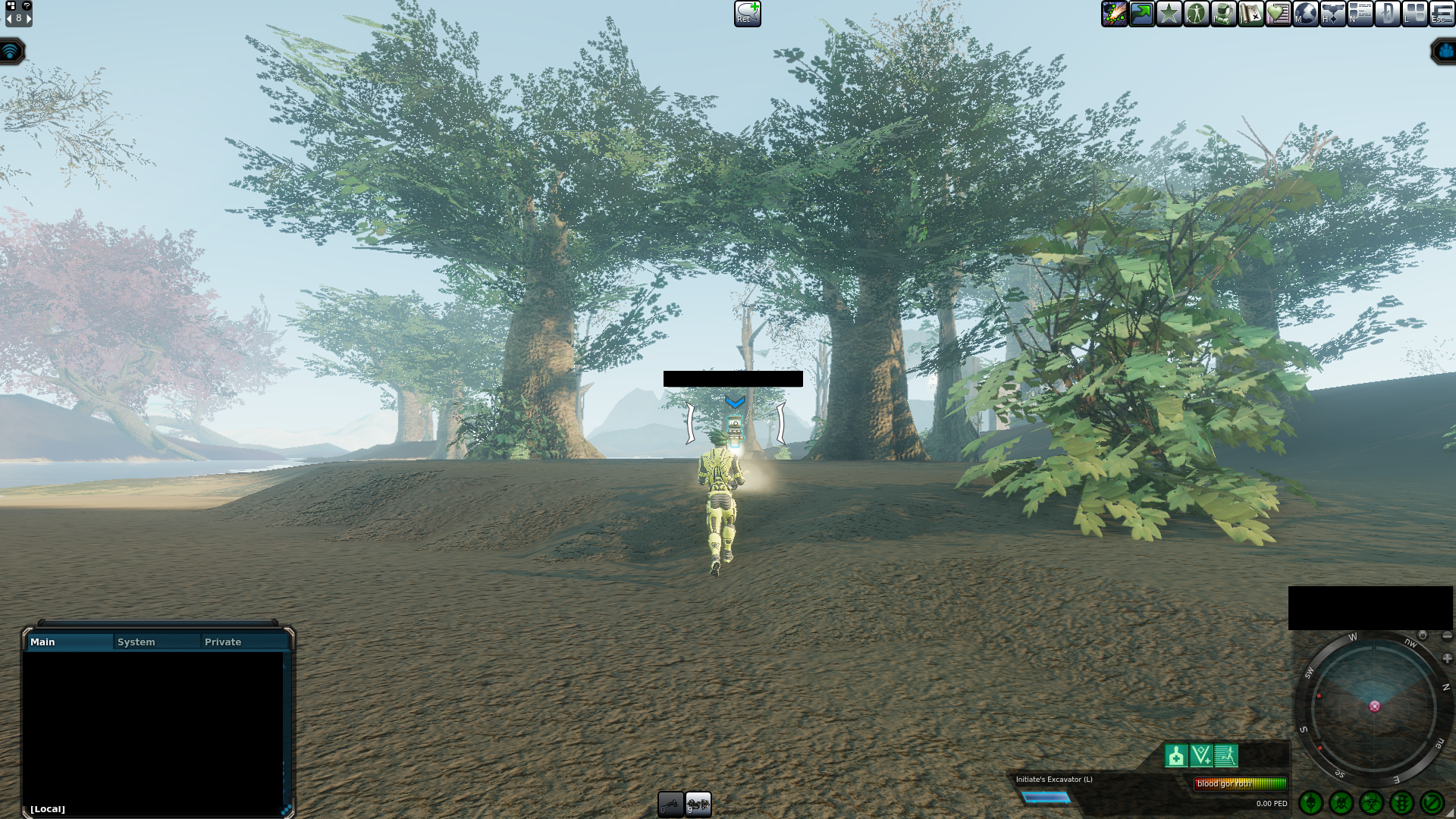 While I don’t usually go out double dropping for both ore and enmatter at the same time. Since I have no idea where certain spawns of materials can even be minded these runs will be for building out my database of information.

For many double dropping which is the process of searching for both ore and enmatter at the same time can make it hard for them to get enough of any one resource to have a decent-sized stack to list for sale. You do make sure you have enough PED to cycle to account for mining for both at once. I ended up finding it quite fun. A few times I would have both an ore and enmatter found. Many times however it would just be one or the other. It lead me to find something most of the time and even helped clear out what would have been dry spells if I had only been searching for one or the other.

I also need a lot of basic ores and enmatters on this planet. While I’m not that big into crafting some things I want to do on this planet require crafting keys and other things to complete them. This seems like a great way for a planet to give usefulness to the special drops that can be found on it.

So I went out and started gathering some information. In my first few runs, I’m doing so looking for more broad information. If I can find some general areas that can drop what I need for missions it will help me out quite a bit. This ended up being my biggest find during the run. I do have some need for Yellow Crystal which is a Cyrene mining drop. While it has some markup it's not over the top either. It’s kind of the middle of the road. At least this find helped a lot during this run.

I also don’t know much about the markets for these materials or how they would be fair trying to sell them on Cyrene. The only thing I have done is gone through some of the more basic blueprints I could get my hands on and see what they are looking for.

Quite a few of the materials can be refined or combined from the looks of it to make other needed things. Some of those items are needed in crafting further components of stuff while others are for turns in for missions or unlocking instances. I have not mined enough yet to tell if I lucked out and found some large fields that mostly have Cyrene only mining materials in them. For all, I know this could just be how the whole planet is. I know when I went mining on my trip to Monria I had zero luck finding any of their mining materials.

As someone who has mined on another planet like Rocktropia for their planet only ore drop. I am quite used to there being a massive area set up just for those materials. You would often be hard-pressed to find anything else in those spots if you knew them.

While Cyrene so far has had a bit of that vibe. I did end up finding small traces of other things along the way during this trip out. This is a good thing since I needed some Lysterium and oil for some basic crafting. I however only find them in tiny amounts and far in between.

I also noticed Zorn Star and Yellow Crystal which you can mine on Cyrene have some markup to them but not an insane amount. It is also a little concerning when I looked into how much sells in a given week with how much of this run I ended up pulling out of the stuff. This accounted for 90% of the TT (trade terminal value amount) that I found.

They however seem to be decently used in quite a few blueprints and other things on the planet. This makes me think due to the market it can be rather easy to find. I will however need to do a lot more mining to determine that.

While Cyrene is not small like some of the other places I’ve recently visited. It is also not so massive as Calypso. Where I would spend day mining in some areas. I ended up hopping around a fair bit. Both if felt like someone else had recently minded an area or if I found it too hard to mine in a spot. I’ve had a few run-ins with the local wildlife while out exploring and trying to determine if an area long-term could be worth my time mining in again or not. Some of the things I ran into were not much of an issue and I almost ignored them. While others over mining in them for a little while almost killed me.

For my first couple of times out till I fully understand the ecosystem of mining here better. I’m being a bit more to the chest with some information than usual. While I’m trying to determine if this is a plant I can and want to hunt in the long term I’m also looking into the mining aspect of things.

Somewhere out there in the Entropia Universe is the profit I seek. I have no idea if such an opportunity will be on this planet or another. Along with how big or small those opportunities might be. Many times in this game you find something with high markup but it either takes forever to sell or you get so littleof it ends up not being worth it. This mining run ended up going ok. I ended up finishing up before any markup is taken into consideration. One thing I have not resolved yet is if I can sell some stuff here or if I’m going to need to work out how to “safely” get things to Calypso to sell.

If I keep ending up getting mostly Cyrene only ore and enmatter that will more or less answer that question for me. While I’m sure some on Calypso have Cyrene blueprints and will craft their stuff. A lot of this stuff would have a more direct need on the actual planet it is from depending on what it is and what you can use it in.

If things do end up selling for around the market I think they should be this run while not a massive winner just wiped out most of my smaller run losses I had on Calypso. It also put a sizeable dent in that horrible run I had there as well.

Mining so far at least for this run was kind to me. Hopefully, I’ll find mining on Cyrene a lot more enjoyable than Calypso. Only time and a lot of future runs will tell.