With Summer Migration on Calypso expected to end sometime this month, I ended up hunting Longtooth and some Mulmun. In total including the hunting seasons I’ve already done on them I ended up going on about 30 hunts.

After I had wrapped up my series on Planet Cyrene it was time to rush back to Calypso and partake even further in the Summer Migration event before it ended for the year. After that, I’m not sure what kind of events will take place till perhaps October. This might be the last one for a little while.

By the time I got back, the Longtooth had already started to migrate somewhat. I first thought it would best to check the static areas that I had already found in my last post about the event. From there I would look into if there were some better opportunities for myself elsewhere. 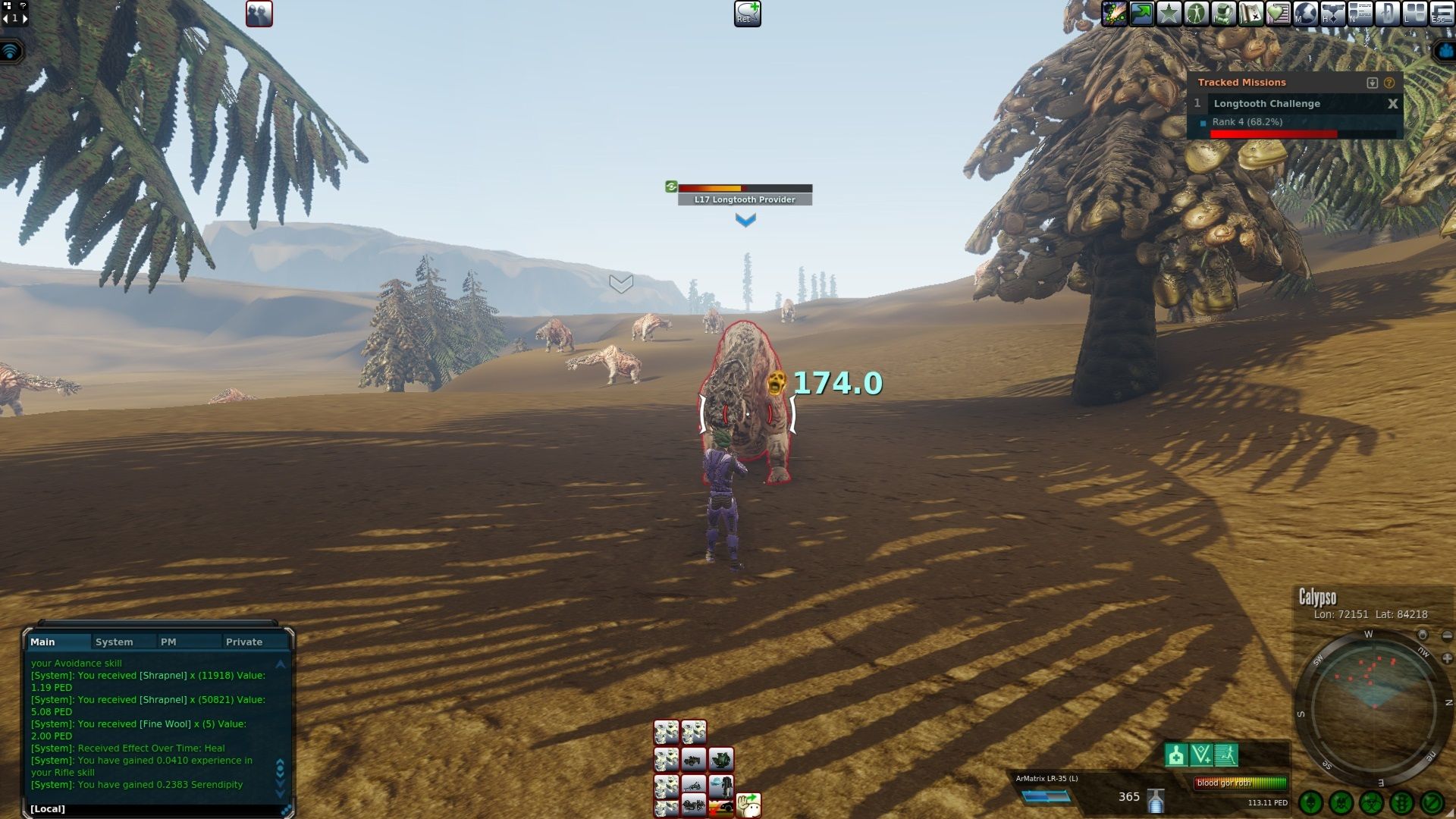 I first went back to the Longtooth area north of Atlas Haven. I was mostly looking to pick off any Providers that were up. There is a bit of a range of levels here. Those around the Provider level I could kill without much issue. Anything bigger than that would be harder than I was looking to take on.

While there were one to two other players there during the couple of hunting runs I did while north of Atlas Haven. Most of the provider spawn had been killed off to the point that there was mostly only higher level Longtooth remaining.

I was usually not the only one looking to hunt them either. It would be been best if I search for a better spot for Providers if that was what I end up settling on. There were only a couple up at a time and I had to fly around to avoid anything harder. 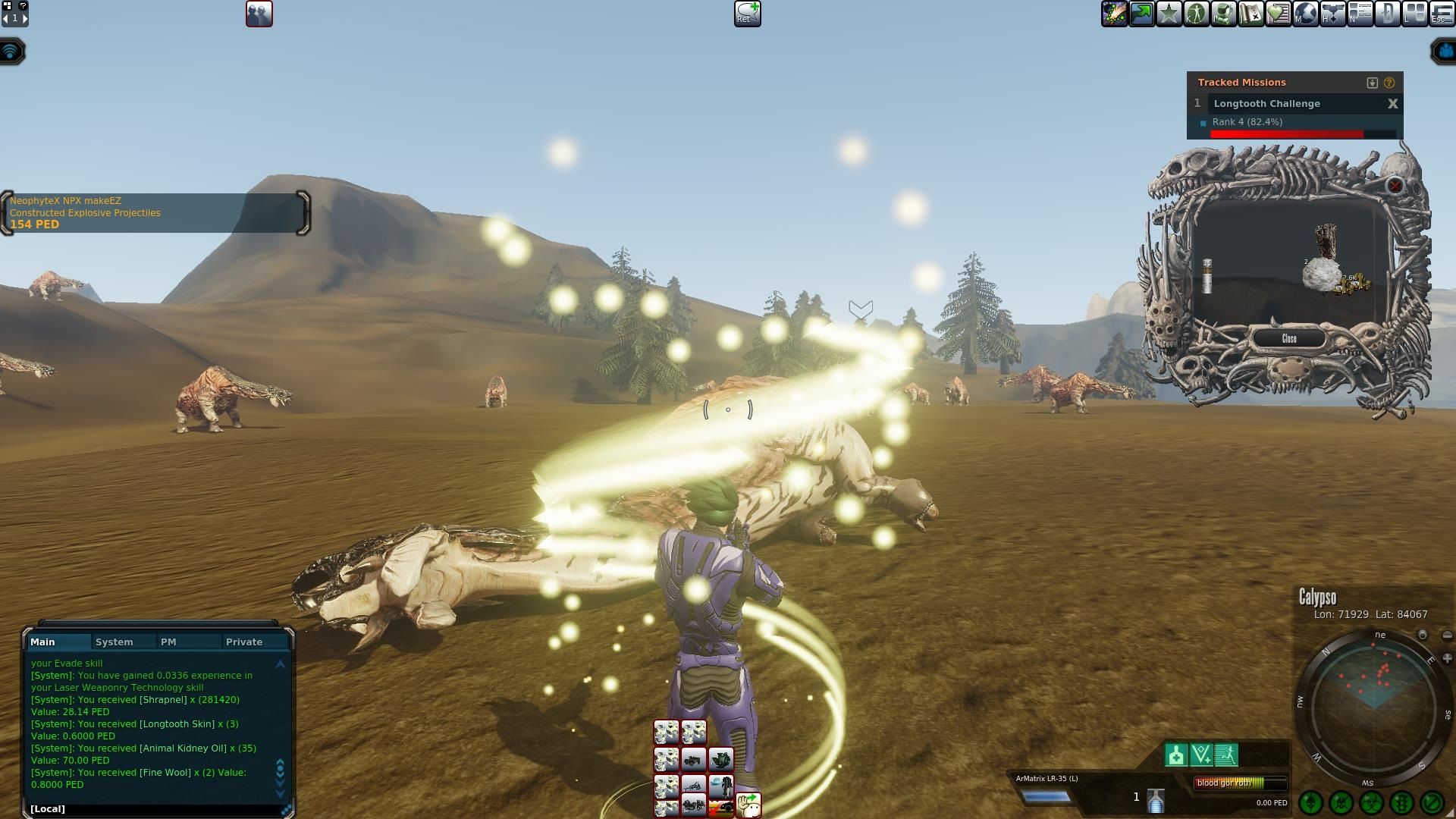 In my first hunting round out there I did get a decent 99 PED global. I always find it crazy when this kind of thing happens and I had like 1 shot left in my gun. I almost did not think I had enough ammo to get one kill before leaving. I decided I was close enough that I’d convert some shrapnel into ammo if needed.

Needless to say, I was rather thrilled I stayed for that last one. I went back to do a little more hunting in this spot. The number of Longtooth I could hunt kept decreasing as the spawn was being taken over by higher and higher levels as. As such it was time to move on. 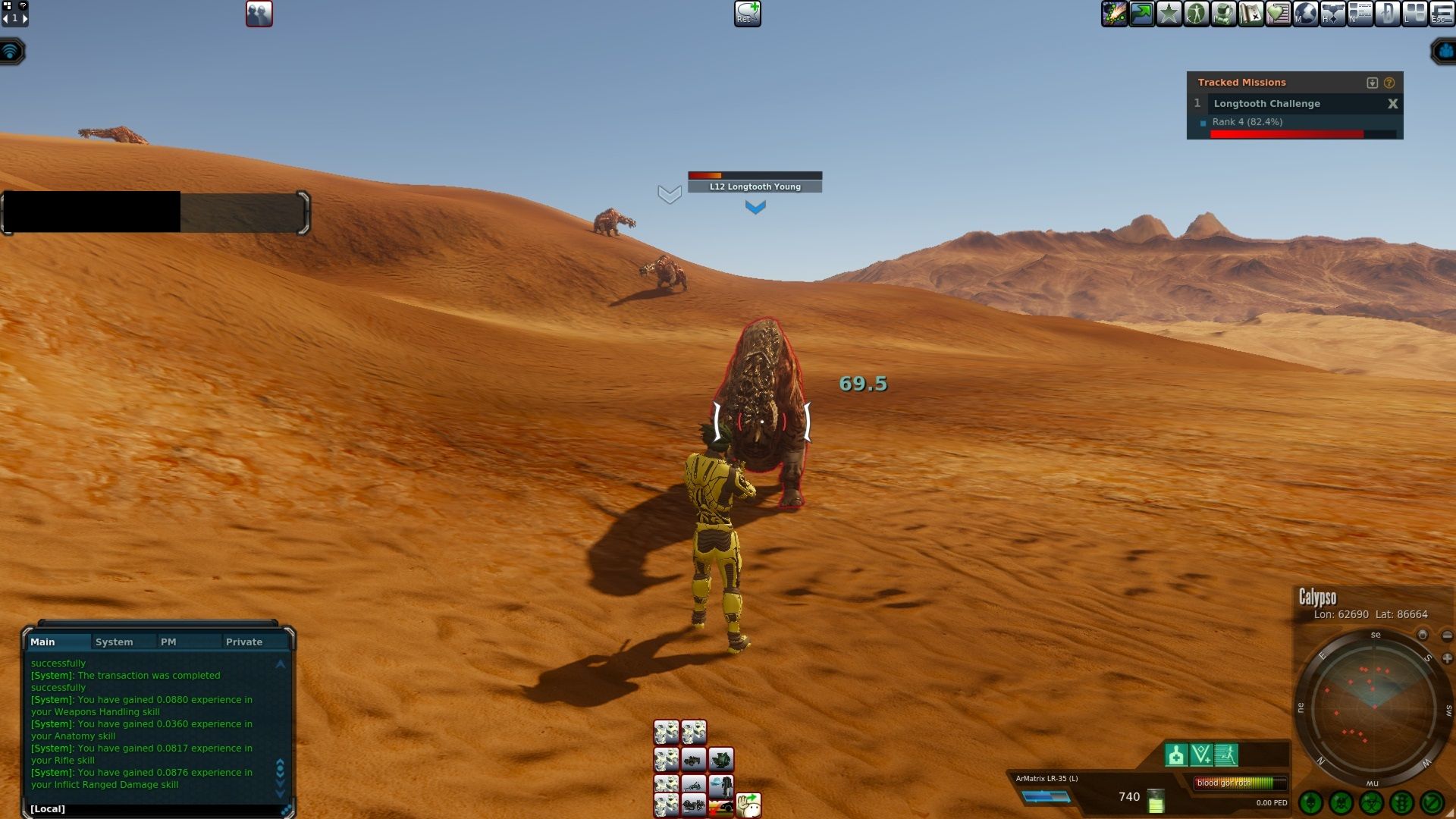 Next up I wanted to grind out some Longtooth Young for quite some time. They are a lot cheaper and quicker to kill. I was still using the same gun as an ArMatrix LR-35 (L) that I was on the high-level ones. I however got to switch out to wearing my adjusted pixie armor and heal a lot less.

Longtooth Young would end up being the most eco of the Longtooth I would end up hunting. They had the smallest percentage of my decay comparable to my overall costs per hunting session. They would also end up being quite profitable in the short term as well. I also to my surprise ended up looting an Emik S60 E.L.M edition handgun during one of my hunts. While the TT value is only 1 PED. It had a markup of over 1000%. I believe I ended up selling it for around 11 PED. That might not be insane but if I could have kept looting those kinds of guns that could add up over the long run. 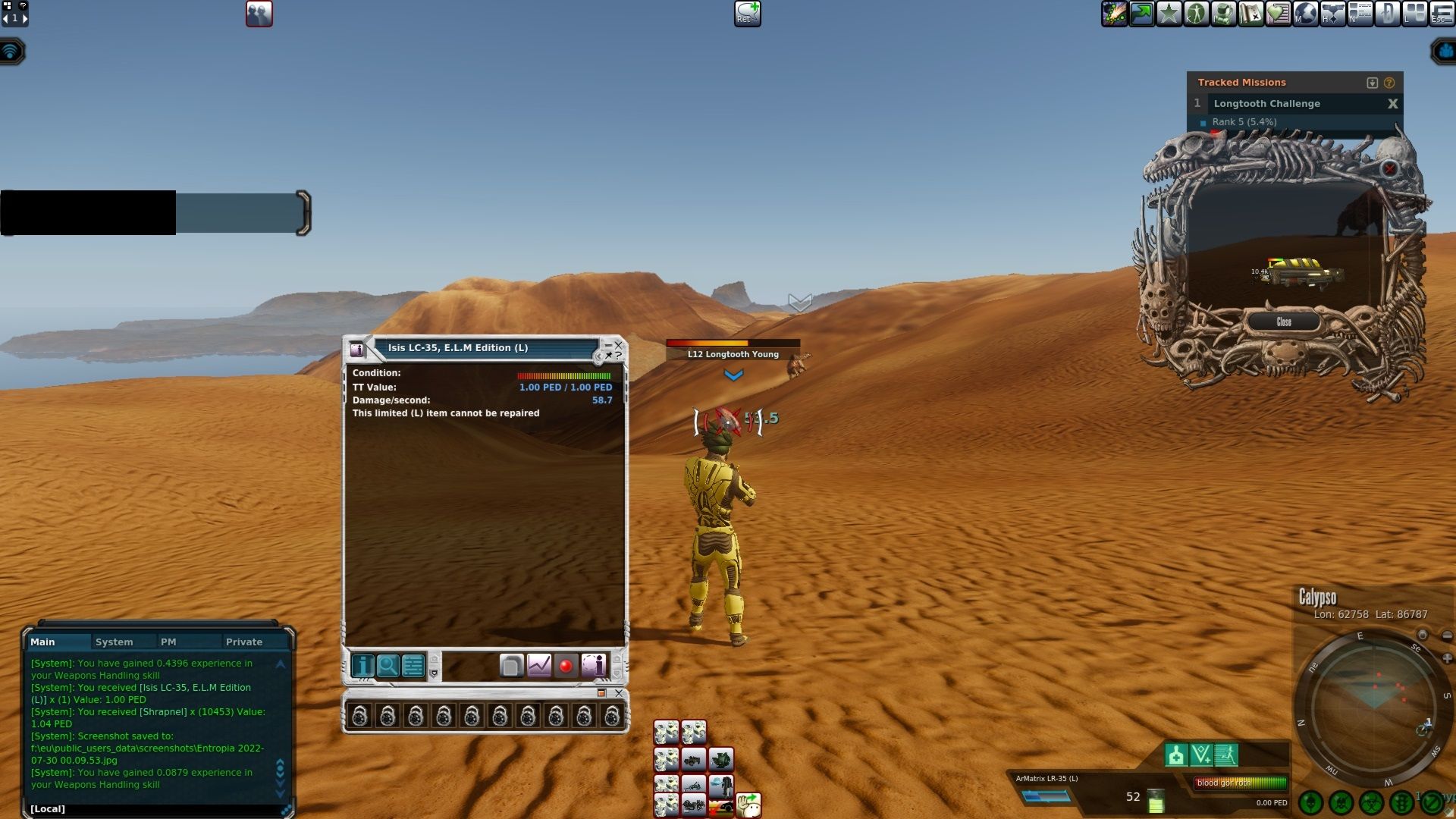 Shortly after that on the same run to my shock, I got another E.L.M Edition gun. This time an LC-35. While it again only had a base TT of 1 PED like the last gun I looted. This one was a lot higher than a damaged gun and I ended up selling it for around 70 or 75 PED for over 7000% markup. These two loots alone more than made that particular run profitable.

Leading up to the Summer Migration event I heard many players wanting to know if these E.L.M type of guns would be dropping. Now I fully understand why. They sell for insane amounts of markup and if you want to be hunting the daylights out of something that is what you want. I’m also somewhat shocked that all my hunting on higher level Longtooth did not get one of these types of guns to drop. I would also not find any further ones that I recall from all the remaining hunts I went on.

This was perhaps some insane luck. It left me in a belief that these must be dropping a lot that I managed to get two in a single hunt. As a result, I went back to hunt the young a few times further before moving on to another area.