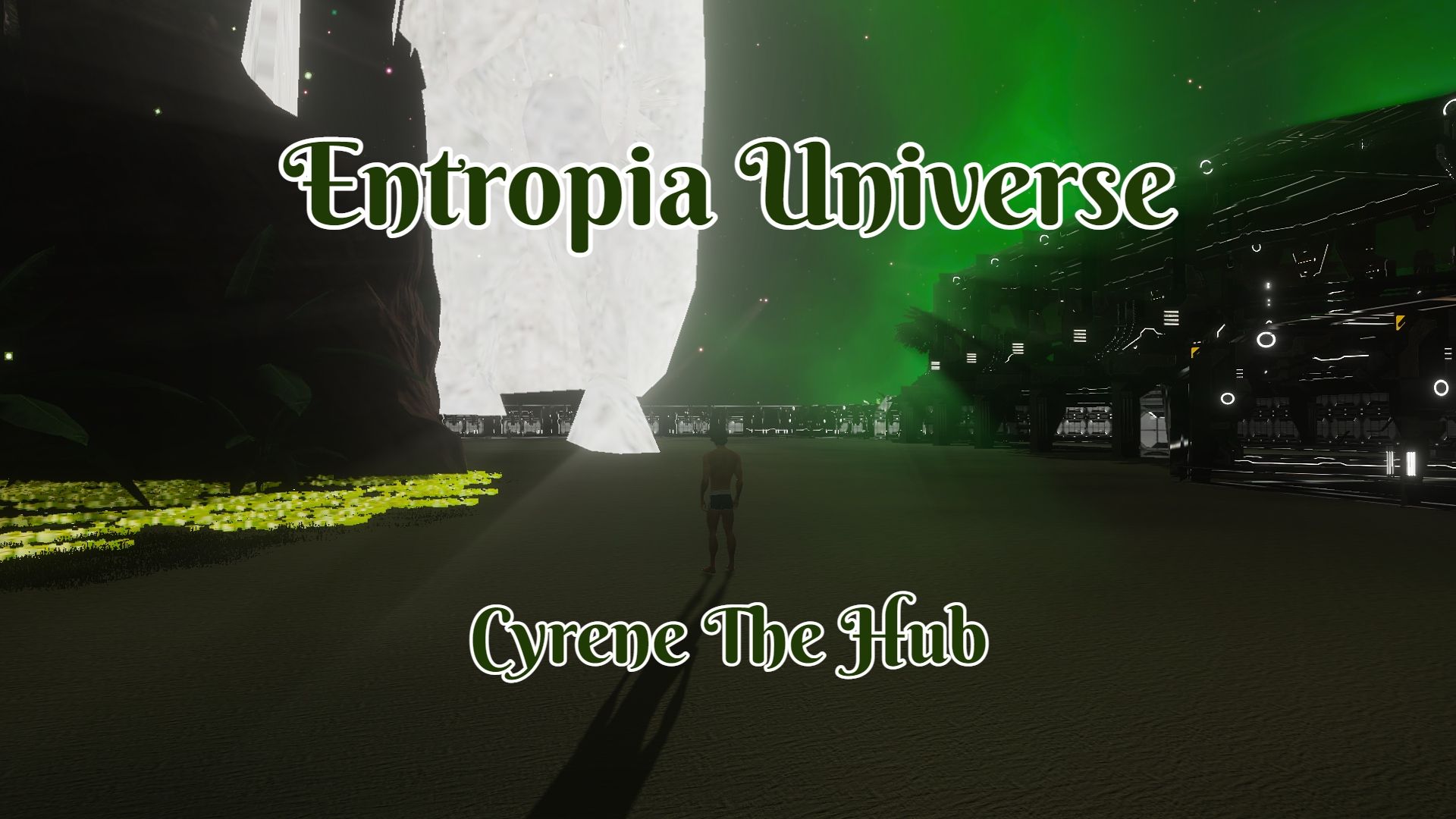 While PvP has never been my thing in Entropia Universe I came across the HUB that you can access on Cyrene. It seemed like both an interesting and still to this day unknown thing to do. While I could get a peek of the area in question I lacked the requirements to see it all.

Quite a few times while exploring the planet of Cyrene I would come across NPCs that kept talking about The Hub. Some of them gave a little insight into what it was. Others simply talked about getting access to certain areas if you have enough badges.

This piqued my interest enough over the long run that I ended up checking it out. At first, I was not quite sure how to even get there. After exploring the planet in quite a detail I had yet to run into the teleporter or an instance for it. 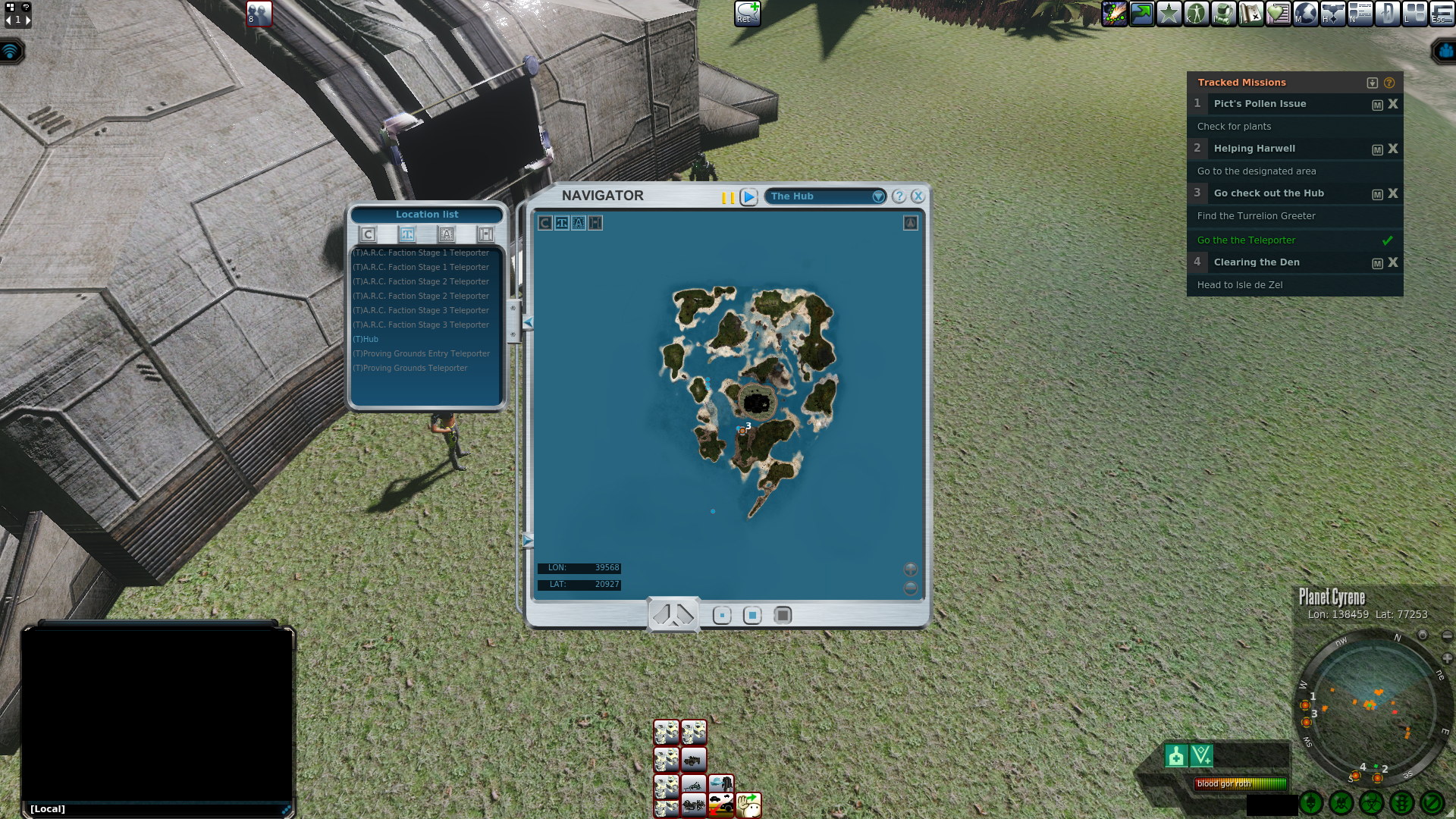 To be able to access The Hub you need to change the drop-down map selection while at a teleporter on Cyrene. For most players, this is not usually something they have to do very often and they might not even know that is an option to do. Then you select Hub teleporter to go inside.

Once inside you will find that all your items have been unequipped and are not useable. The Hub is quite a unique and different place than anything I’ve yet to run into while playing Entropia Universe. It has special items that can only be worn while inside and they cannot be equipped anywhere else. There are several vendors inside that sell gear and weapons that you can only use while there. Since they don’t have to play by or be balanced around the game itself some of them are a bit more interesting than what you tend to find in this game. I won’t spoil that.

This entire place is set up for PvP. From my best guess Planet Cyrene was hoping to be some kind of home for players who enjoy Pvp. That also might explain why so many missions try and get you into the loot-able PvP part of the planet for running missions.

Thankfully here it’s non-lootable PvP from what I have seen. Like many places in this game, you need to progress forward to gain more access to it. I could only explore a few sections of it. 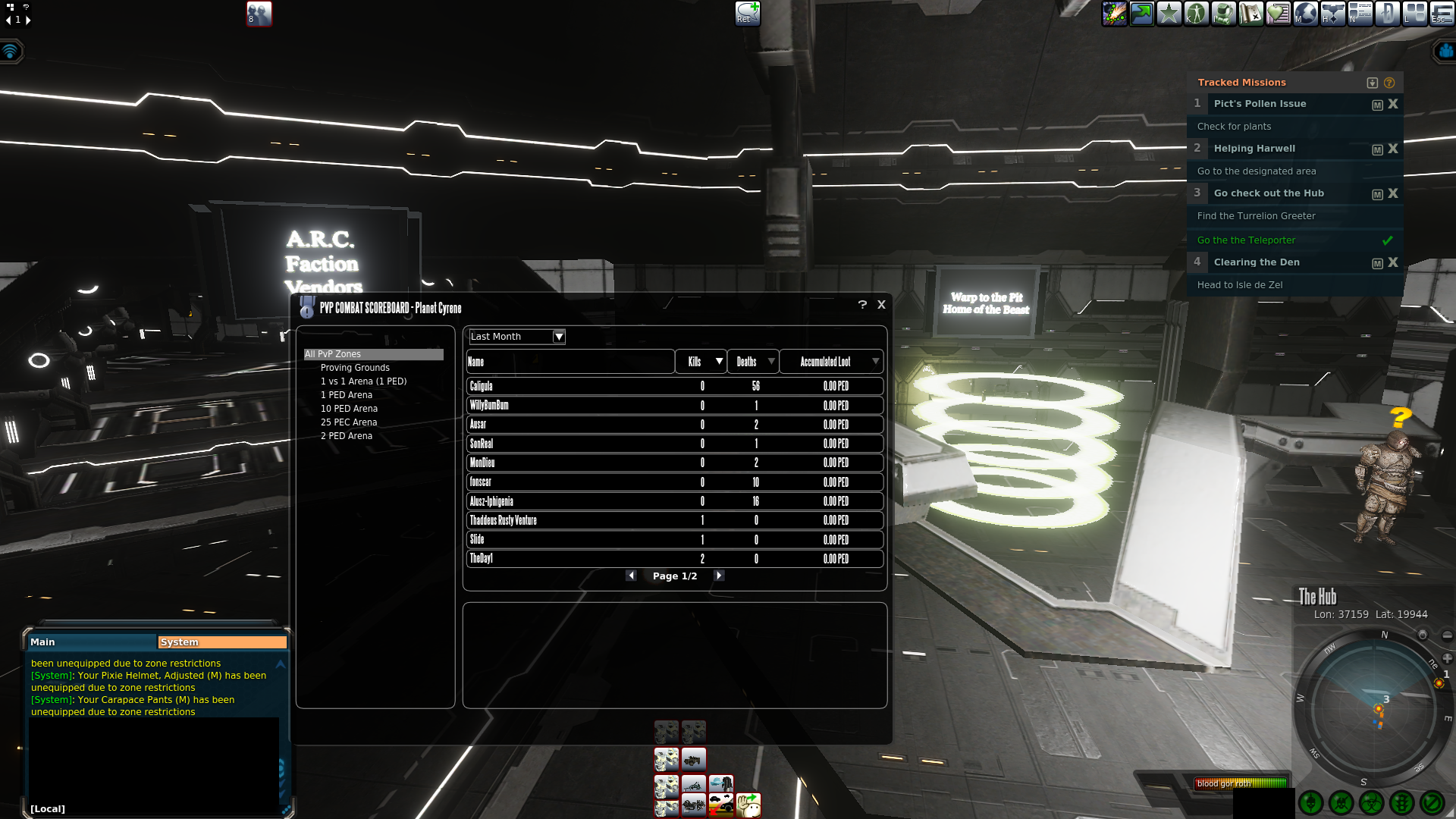 One area I decided not to mess with is paid arenas. You can pay an entry fee and enter into 1 v 1 combat of some sort. I can only assume since you have to pay 0.25 to 10 PED to gain a single entry there is a decent reward for being the winner.

This place was as expected rather empty. PvP is not a huge thing for most players in the game. During my entire visit down there the first time I never once ran across another player. While that is a shame for what they were trying to do here it made exploring it a lot more easy. 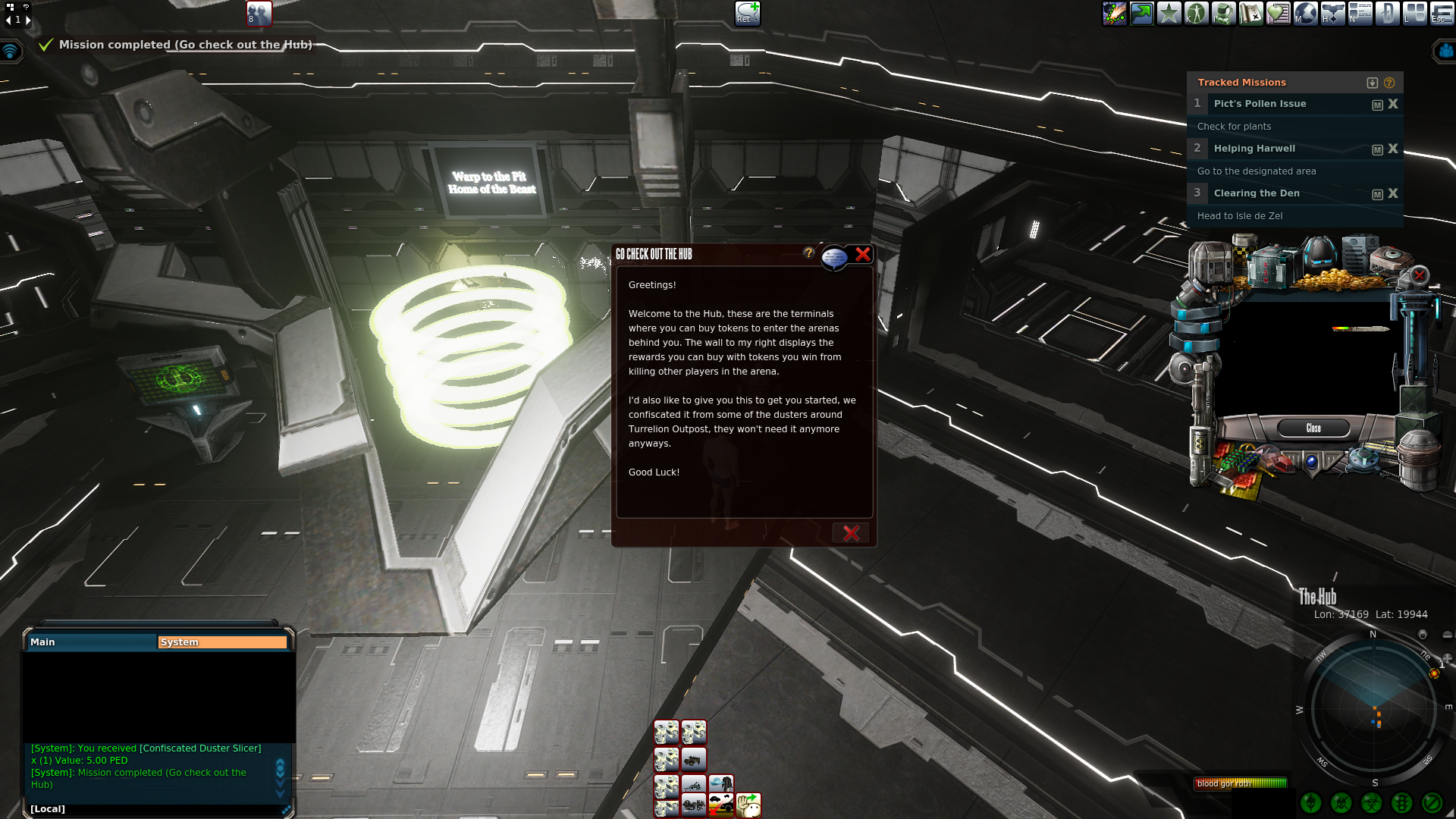 They were at least kind enough to give me a weapon. This would be the last mission I meet the requirements for. The weapon itself meant for PvP was a lot higher than my normal blade skills.

If I wanted access to missions and everything this place has to offer I would have to go on quite the massive grind to get there. One that I feel very few players have ever accomplished and I don’t think I’ve spent months trying would even come close. First, before I could even get access to such a grind I needed to unlock that area. It turns out I needed some Vibrant Sweat to unlock access to the PvP section of The Hub. So back out I went to gather a couple of bottles of the stuff. 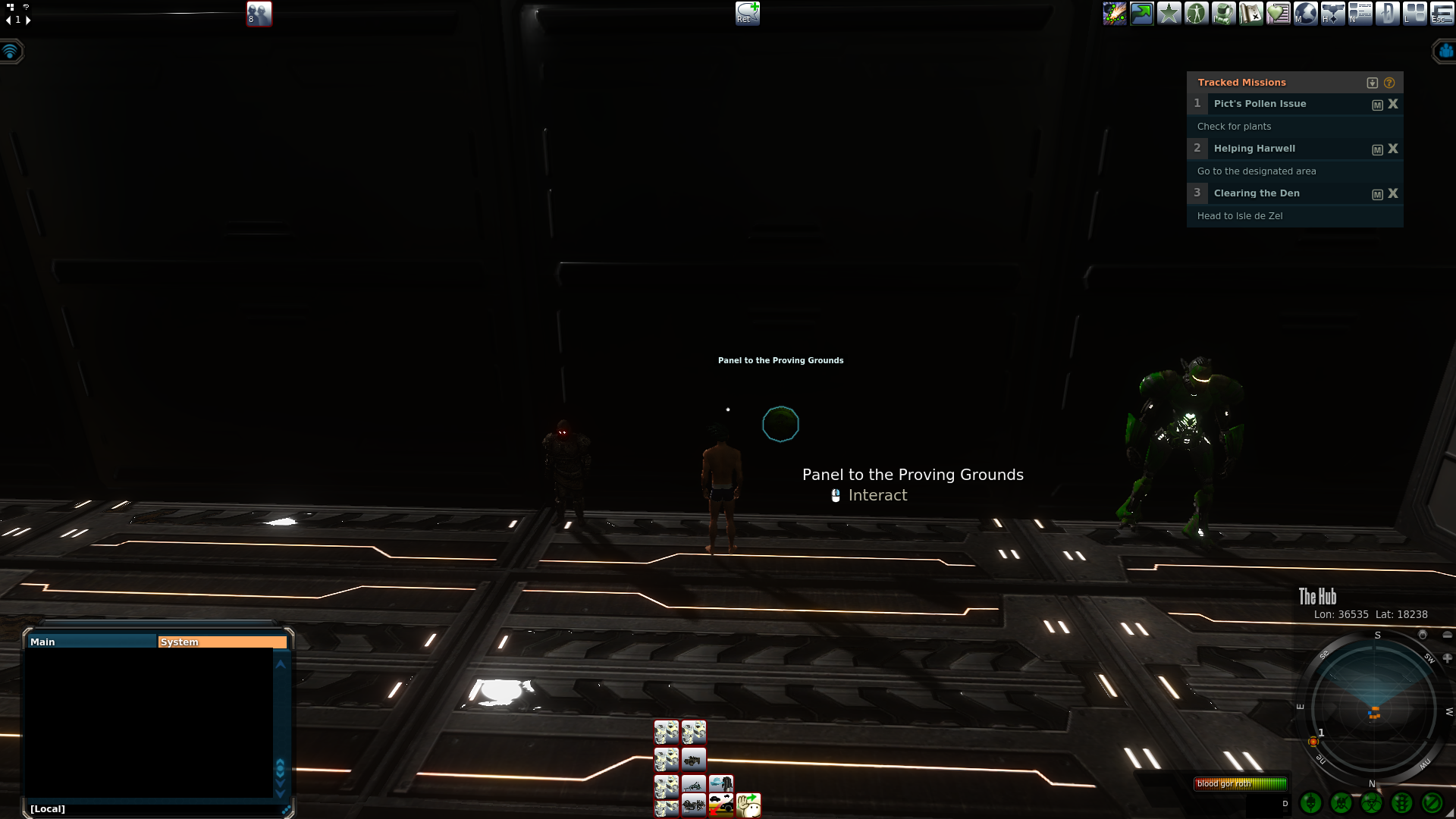 I then went back inside. From there I selected the Proving Ground Teleporter where you can access the PvP part of this place. On the wall is a panel where I put the Sweat I had gathered which granted me across to progress further along. In the next area, I had my health and combat levels reduced. To make it a fair PvP area they give everyone the same stats. The only thing of difference would be I assume any weapons or gear you bought from the special vendors. I however had none of those.

I ended up exploring this area for quite a while before I noticed what I was supposed to be doing here. The area I started in appears to be the main room. There are a couple of other hallways and larger areas beyond with the same neon green cold metal feeling environment. I did end up finding some reward tokens on the ground. They seemed to spawn only once in a while. I did not run into any creatures to see if they dropped any in the grounds. I might do a hunt in the future on some creatures elsewhere that can drop tokens.

The only way out of this place seemed to be by death or teleporting out. Since there was nothing else in there that could cause me any harm. I ended up teleporting out with the tokens I had looted.

Why do I need these tokens and how many of them do I even need? You would think something at least reasonable like a few thousand? While in there I think I collected a couple hundred. That however is next to nothing for how many I need.

To be able to progress further along it appears I need to buy a coat one of the vendors is selling for 550k lime green tokens. As I need to prove that I'm worthy. That is just a mind-boggling amount. I don’t even want to know how long that would take to grind that many. What I did not see down there but I’ve been told is that creatures that drop the tokens can drop as well. They are there to kill the players so that people are not just running around without any gear collecting tokens. I never ran into anything while down there.

Perhaps there is a chance I ended up missing a section. I was however down there for a while. I only did see the tokens spawning in what appeared to be the main area.

There are other sections of The Hub I could not access. They contain the faction vendors for Planet Cyrene. The first one requires 200 A.R.C Badges to access. While I don’t know what items are in their player seem quite obsessed on this planet with acquiring them. Perhaps one of the more strange things I’ve found while exploring Entropia Universe. While PvP is not my thing I can respect that they were trying to build out something special here. Cyrene continues to show me they try and set themselves apart from the rest of the game in interesting ways.