I’m sure many will be shocked if you know me that crafting is quite a weak spot for me in Entropia Universe. It was something I tried quite early on and found to be a great way to lose money. I never made the investments to take it to the next level and to this day I try and avoid it when I can.

Don’t get me wrong there is some amazing markup and demand for crafted goods. I’m reminded of this every time I need to replace a broken ArMatrix LR-35(L) for 117.8% markup or 33B amp for 132% in some instances depending on demand. Despite having some high crafting construction skills due to other skills of mine like my guns which had a huge impact on having 5933 points in Laser Weapon Technology. I’ve only ever crafted a few guns if that in my entire time playing Entropia Universe.

Back in the day when I first started I gave everything a decent try: hunting, mining, and crafting. When it comes to crafting I found it rather lackluster and it seemed like a giant money sink where I just could not see the returns for doing so. Starting I would take a very basic blueprint that required no skills to craft the item. I then would buy off the auction house the basic materials these low-level blueprints would usually require. I then would go on long 1k, 5k, and 10k crafting runs of said item.

There were four main reasons back then for doing so that I could recall. The first was to build up some skills, the second was to increase the quality of the blueprint, the third was to generate some crafting residue to be used in (L) items to fill their TT value to full if you had enough, and the fourth was to acquire more blueprints.

The higher the quality of the blueprint was up to a maximum of 100% the better chance you had at having a successful or partial success crafting attempt. When you get the success you get the item you wanted to craft and maybe something extra. With partial success, you get some of the crafting material you used back. With a failure you get nothing.

For a while, I think I was crafting springs or something basic. I had the blueprint up to 100 quality and if I recall over the years I sold it for a little bit of markup. The idea was to find intermediate goods with some markup on them, build up decent skills for crafting that item, and use a high-quality blueprint for it.

Assuming there was enough markup over the long run I was hoping to make some profit. Those that did not want to specialize in that intermediate good would look at their costs to make it themselves and see it was just cheaper to buy off the auction house. Not to mention they would not need to spend hours crafting lower-tier items they needed for their end product.

I ended up getting to a point where I was not selling the number of goods I needed at the price I needed to at least break even. After a few attempts, items not selling, and losing money I moved onto other activities in the game. I usually stay far away from crafting and leave that to those who have invested in owning a shop, blueprints, and market game knowledge to leverage their construction crafting skills.

Cyrene however had different plans for me. One way to acquire A.R.C Faction Badges was through crafting. They also had some very easy crafting missions for some decent skill gains at my low levels for them. You also needed crafted items for a few other things. It was also a good way to use up a lot of mining and creature loot I had acquired and put it into something more usual for myself. I was hoping to have some better luck in finding further Cyrene blueprints while crafting. While I bought a few of the ones you can off Cyrene blueprint terminal along with gaining the ones I could from missions I could find. I was just not hitting the blueprints I needed to get into more advanced crafting on Cyrene. 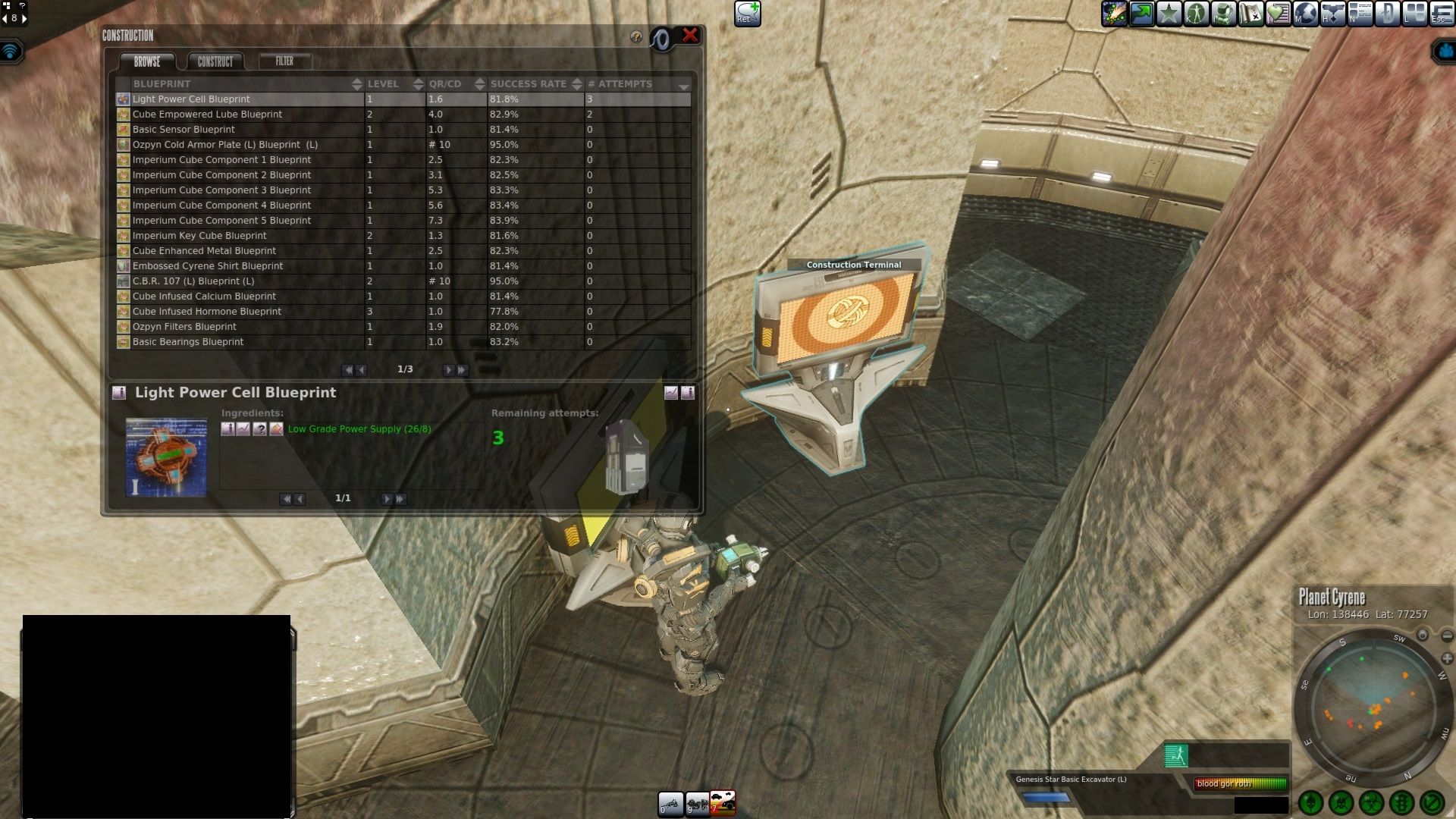 At the very least I did gain a little bit of quality on quite a few different blueprints. Along with gaining some crafting skills that I’m rather lacking in. While it was not the most profitable thing ever there was usually not much of any supply of what I needed in the first place so I had to craft what I needed myself anyways.

It was kind of nice for Cyrene to move me out of my comfort zone of not wanting to go nearing crafting. I can still say for the most part it’s just not for me. I’d rather be the one out hunting and mining than the person needing those materials to make goods with.

While it could be cool one day to just make my guns. There is a reason (L) blueprints for the guns I use tend to go for 4k%-7k% markup and only have a few clicks on them before the blueprint is used up fully. Without having some insane skills that would just be flushing money down the drain. This is why I buy my guns instead of trying to make them myself.

There is also the fact I’m missing quite an important blueprint to get into crafting nowadays. People from my understanding tend to grind it to fill the void of having residue and to acquire sought-after blueprints in the first place.

Without having the right blueprints and capital to invest into trying to create a business around being a crafter in Entropia Universe. It can look like quite a high barrier to break through and to try and profit. One that I leave for others who put the years into getting to the point they are at.

This is also why I rarely talked about my crafting activities for the decent amount of time I’ve spent on Cyrene. This is just not a topic I have much experience or knowledge of. There are certainly a few activities on Cyrene for crafters and that was great to see. It is just not a big part of the game for me personally.