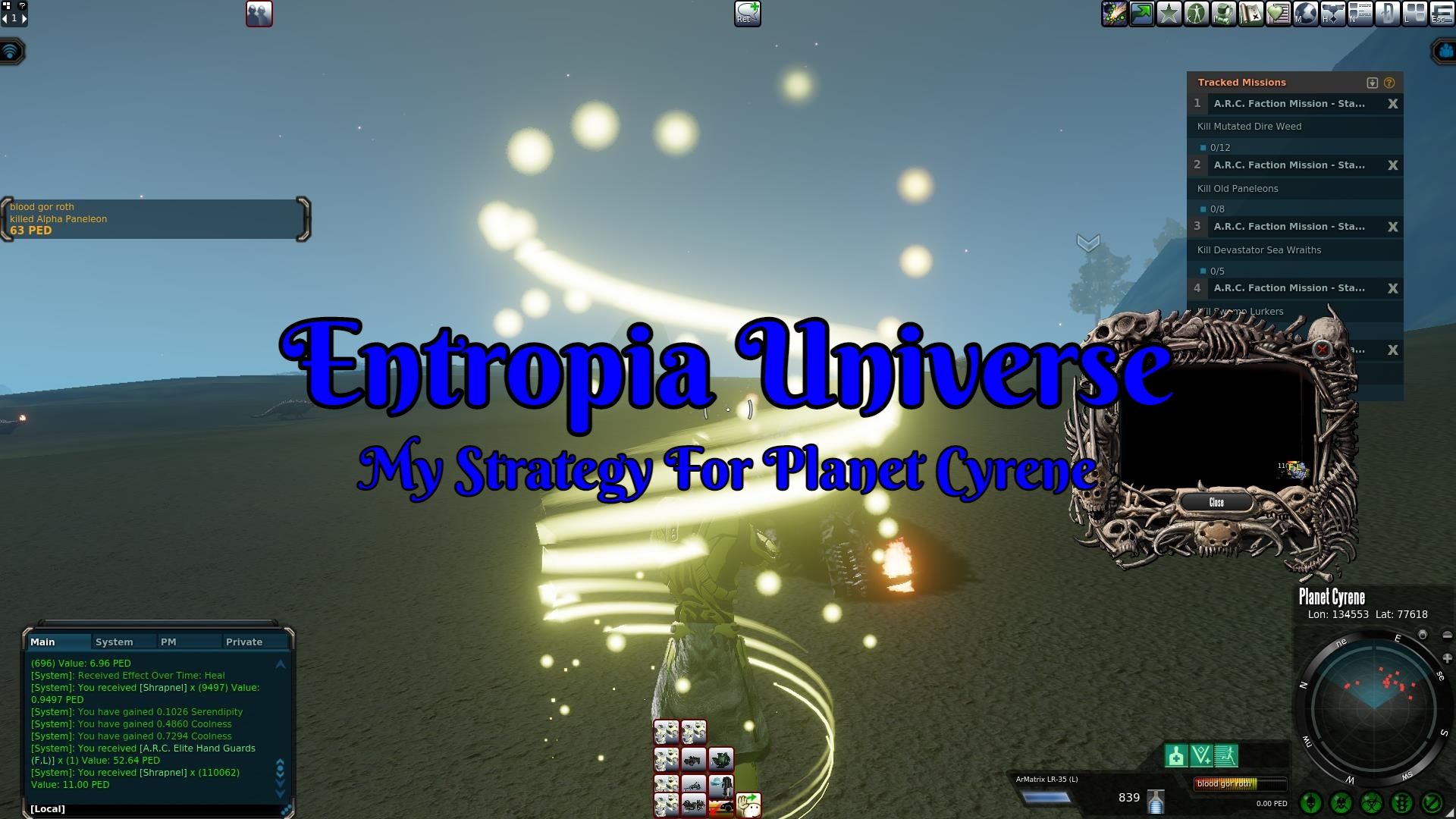 Often I don’t have a specific strategy when playing on one of the many planets and objects in the Entropia Universe. Cyrene is however quite different from what I’ve experienced elsewhere. The smart player can stack quite a few missions on top of each other and work on long missions a little each day.

Most planets these days have at least a codex for each of the creatures on their planet along with many missions. When you kill enough you get to rank it up and pick from a list of skill gains to acquire for your effort. That is just the starting point for Cyrene. The only thing you need for the codex is just to kill a creature and you automatically get it. For everything else, you need to pick up missions.

The more I explore Cyrene the more I realize having deep player knowledge of this planet allows you to gain a lot for doing so little. If you are mining, crafting, or hunting and did not go out and see if there are any missions. You are missing out on a lot of opportunities to pick up skill gains and possibly other rewards along the way for doing something you are doing anyway. 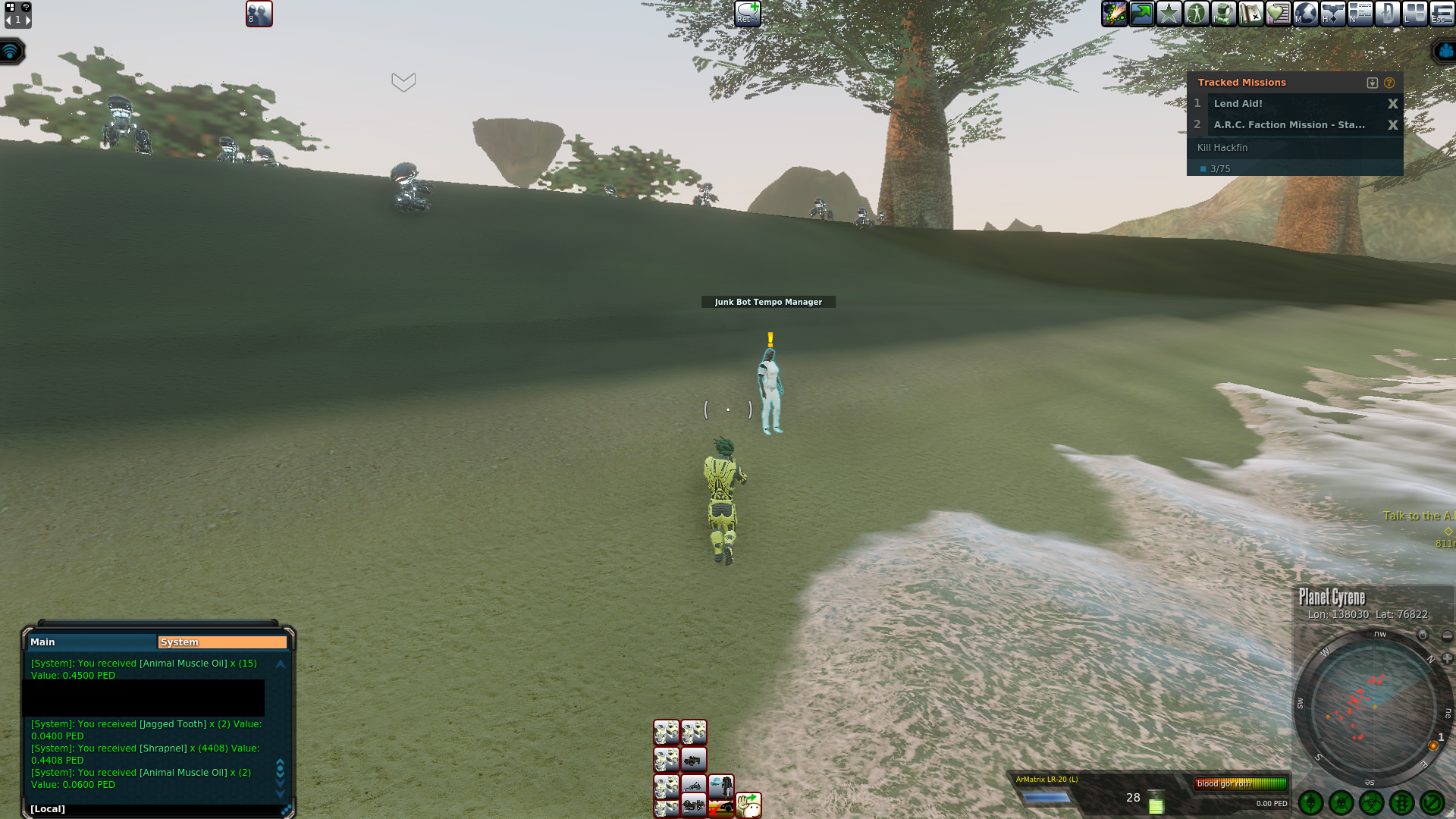 One thing you find to the west across the ocean from A.R.C Immigration teleport on that shoreline is Tempo Mangers that offer trials. There are about five I know following creatures: Crystal Pede, Dire Weed, Junk Bot, Pleak, and Tree Dragon. They offer a daily mission that has you kill x amount of a lower maturity of that creature within a time frame. While the reward was a very small amount of skill gain for my level. If it was something I was already going to be hunting. If only I could stack something like this I’d be printing skills! 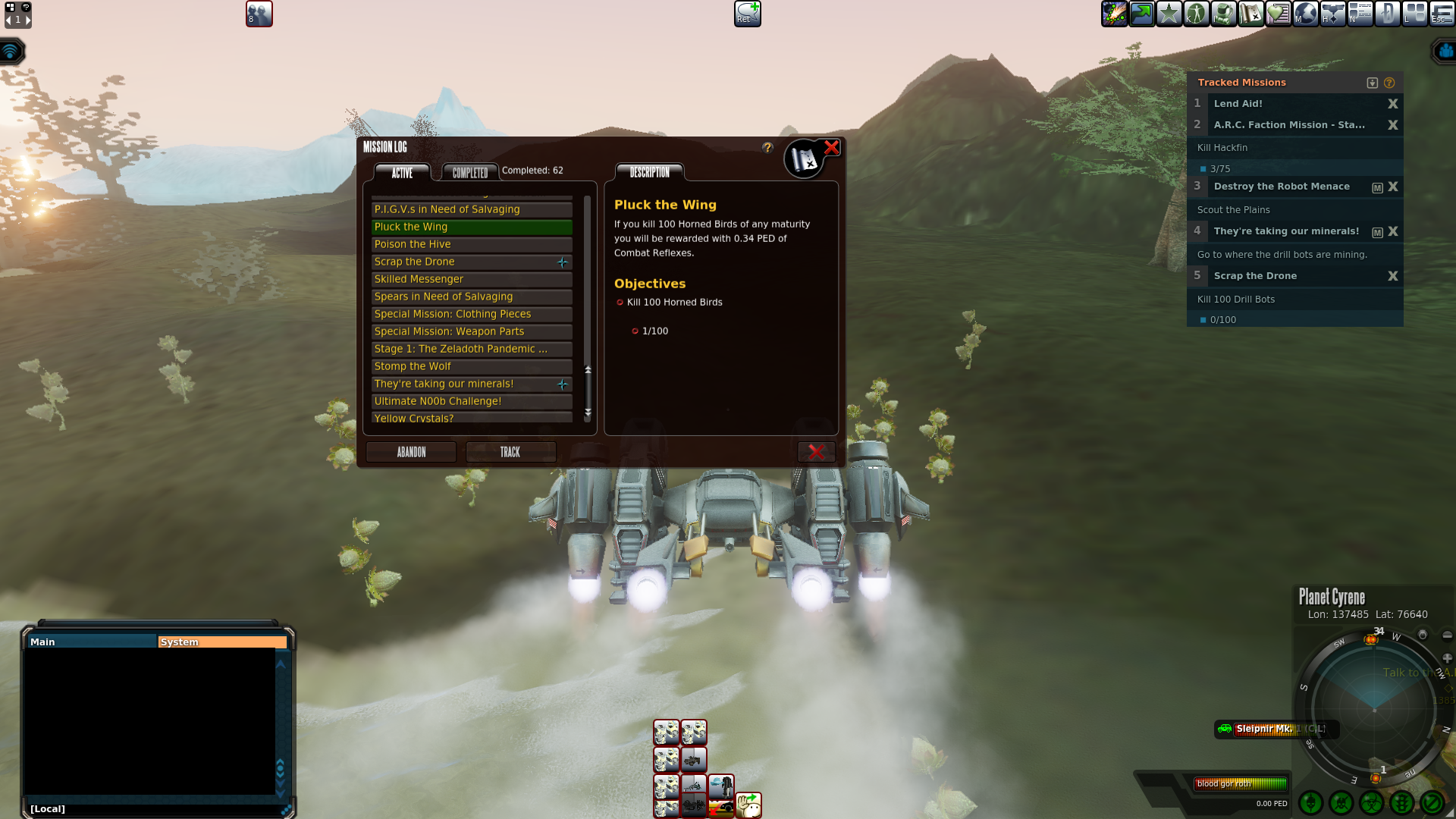 There are also quite a few missions for hunting, crafting, and mining. Many of these are repeatable daily as well. The biggest catch is sometimes they require you to kill a certain maturity of a creature or higher for credit. While other missions like kill 100 Horned Birds could care less. 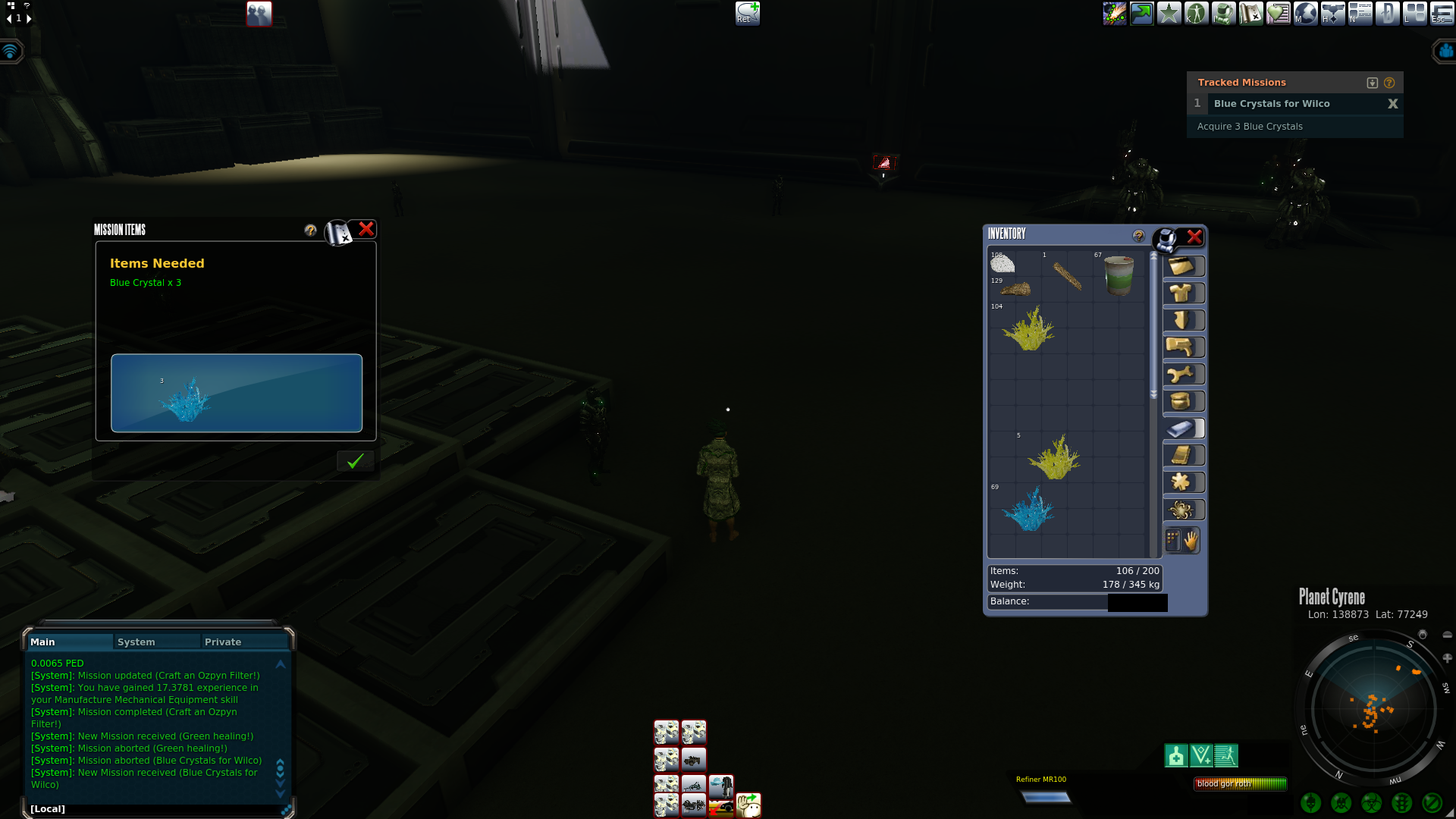 There are also daily missions that reward you with Cyrene mission tokens. These are often repeatable and either have you turn in something or go to a location and hunt something.

One such mission I try and do daily is featured above. There are a couple of NPCs around the A.R.C headquarters teleporter that require a small number of mining resources as the turn-in. There is also a mining mission for finding X amounts of that turn-in material. 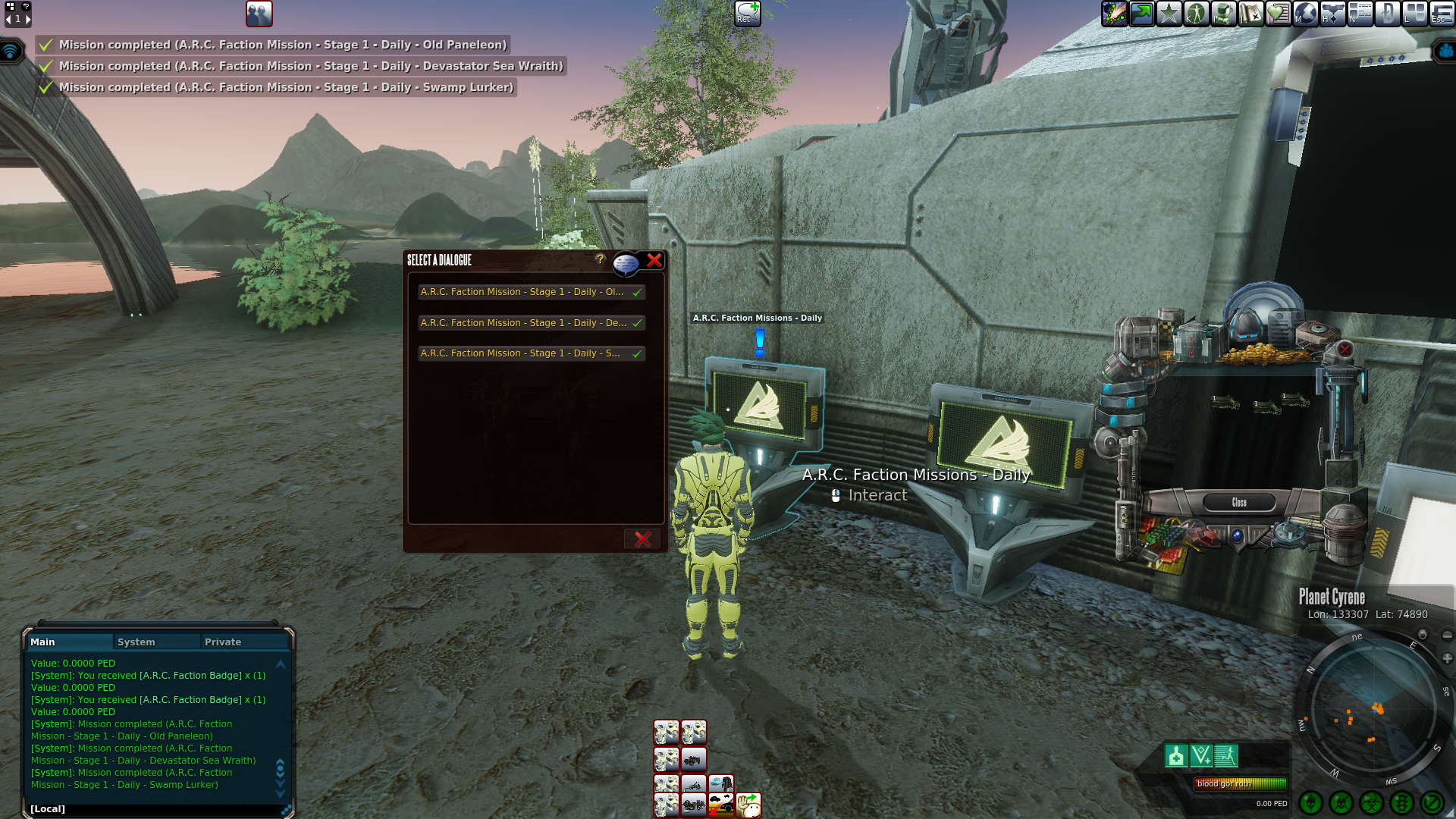 You also have A.R.C faction missions. Without having any badges at all you can start grinding out 5 hunting missions that are dailies. There are also a bunch of them that are non-repeatable that offer a range of badges for a one-time completion for a large amount of the creatures on Cyrene.

The A.R.C faction missions can be found west on a small island of the ice region of Cyrene next to the Tans’Ta’Oh Outpost teleporter. I have a full guide on farming A.R.C Faction Badges. These badges are quite critical for progression on Cyrene.

This is something you don’t want to miss out on. One of the things I was considering working on while on Cyrene will take me over a month of doing all the A.R.C non-repeatable missions and grinding out all the daily badges every single day. As I need hundreds of these badges just to get started with the end game requiring thousands. Right next to the A.R.C Staging teleport you will find a nice mission hub for mostly mining and some crafting missions as well. Some of them are once you can repeat daily. While others are things like mine X amount of a certain type of ore or enmatter. Along with quite a few other missions I’ll be covering in later posts.

While you can’t always find all these different types of missions stacking with each other or in a perfect way. Often you end up finding quite a few that work well if you go out and hunt something.

There is even more than that. While not all of these could be done in a single area you have to keep in mind this is just a single creature. This might be one of the better best-case situations I could find for mission stacking on Cyrene. That is however nuts. Even more so with how many of them are daily missions. 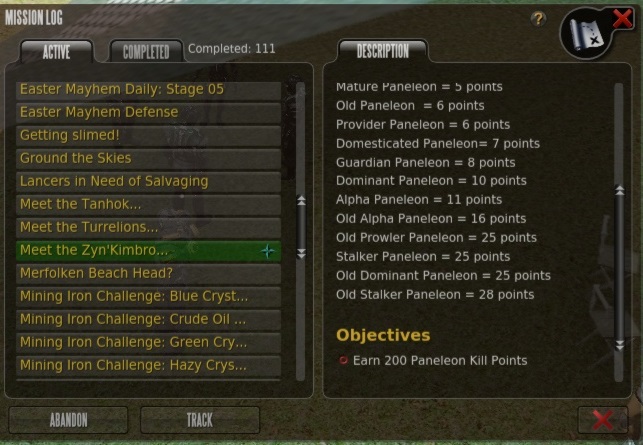 If you are not stacking missions on Cyrene chances are you missing out on skill gains, items, and who knows what else. This planet even has some insane “EPIC” mission chains that require 1k+ kills of a single creature. Some of which you could be stacked with other large kill chains or working on it a little at a time every day.