It seems I’m on a lucky streak at this point. I went out mining again to a few different locations to further map out mining areas on Cyrene. While this run was not as exciting as the last. Things still went amazing near the end.

I find it wonderful just how different Cyrene can be by not going very far. In this run, I ended up mining in more areas I have yet to. There are still a couple more ores and enmatters I’m looking to track down. Mostly on the ore side of things.

I have also been doing a fair amount of crafting with the resources I’ve been finding. Cyrene crafting is a lot more difficult than I’ve experienced on say Calypso. As they required a lot of harder to get drops from creatures and their planet only ores and enmatters in quite a few of the crafts. At least on this mining trip, I ended up finding more of the mining side of things that I needed. What has been quite interesting is on other planets you would refine the resources you minded up without much thought about it. On Cyrene, people have needs for both the raw and refined versions, so, it’s just best to leave things unrefined till you know what you are doing with them.

While usually, I would not be that thrilled with finding a bunch more crude oil. I did not mind it ended up being the second-highest percentage-wise of what I found this trip. I ended up finding 13 different ores and enmatters this trip. Adding to quite a hefty amount of different materials I have already been collecting. Unlike some of my other trips where I went all over the map on Cyrene. I ended up lucking out and finding quite a heavy area of resources to mine. Over half my trip must have been spent mining a relatively tiny area.

It’s a shame I did not bring along the winter clothing that I left back on Calypso. As it sure felt like I needed it being out here. At least I had my lucky jacket with me. 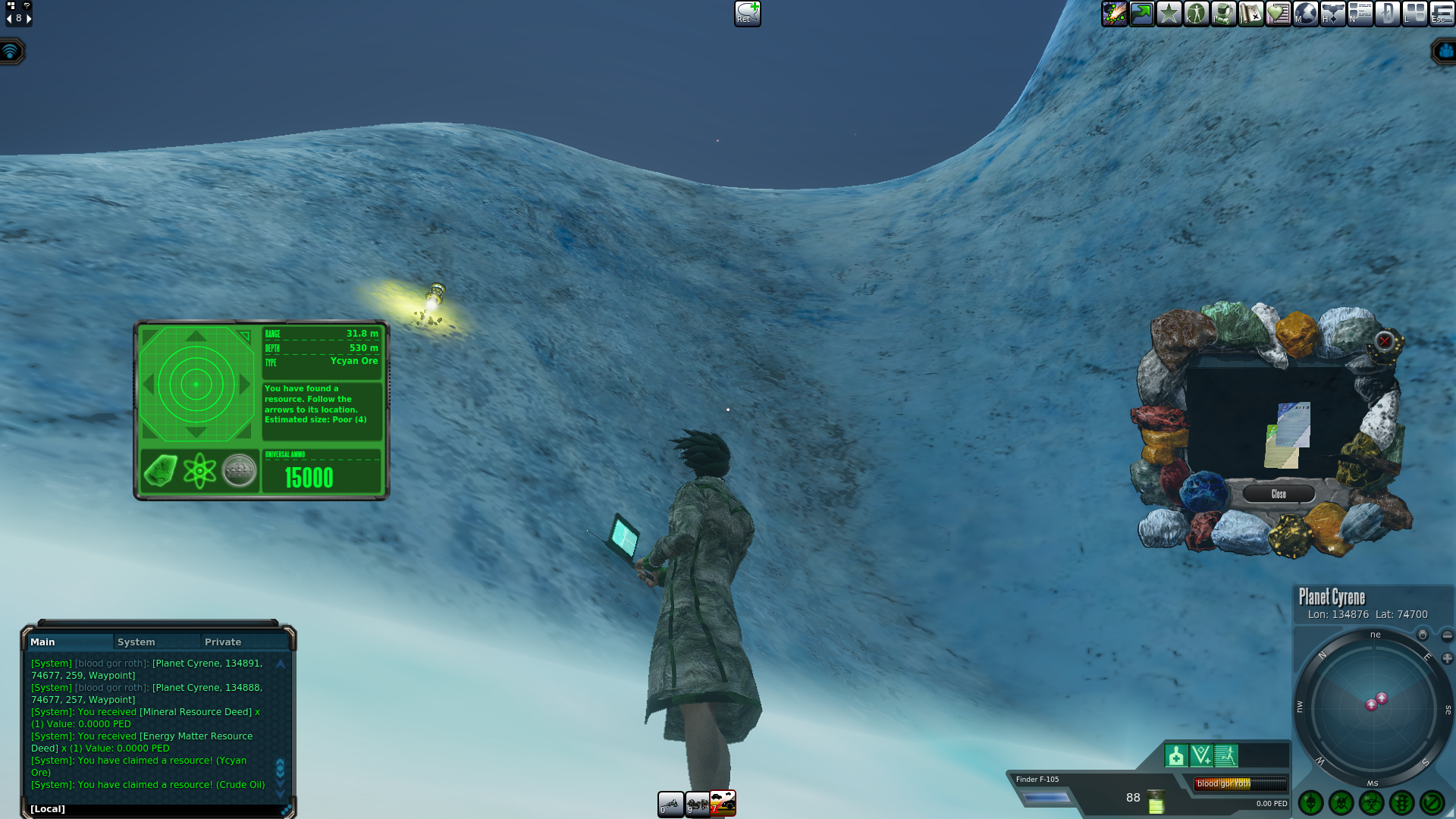 I even found another ore that I have near heard of before. The issue with quite a lot of these is they lack much of a sales volume. I would say Cyrene is in an active development stage of things. There was very little known about this ore in general that I could find. It might be something I end up tossing into my storage and forgetting about.

Players have been constantly finding new blueprints to craft with from the latest update. I can only assume since the developers of this planet seem to have decent uses for many of their other Cyrene-only mining materials. It’s only a matter of time before a blueprint for the ore is discovered or those who already have one start crafty with it.

Sometimes with this stuff you just got to speculate. I only did mine 5 PED worth of the stuff. For all, I knew a year from now it could still be worth not much or 200% markup. Still, it was not a lot and I did not find any on my other mining trips either. 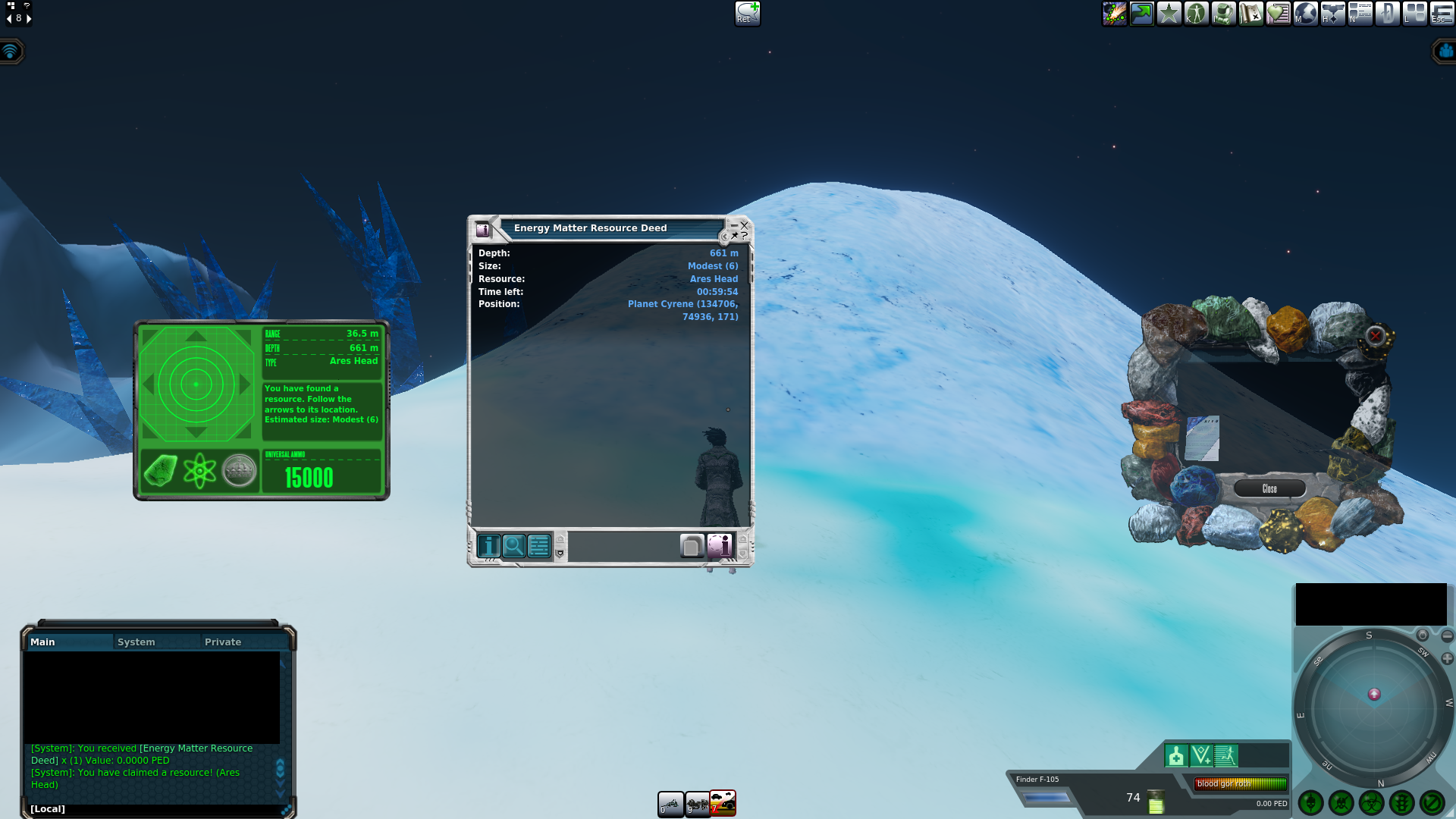 I thought this size 6 of an Enmatter that I’ve also never seen before was going to be my best find of the trip. It is quite an unusual size for an enmatter. I think this might be my first size 6 find on Cyrene. I doubt I’ve found many others with all the mining I’ve done this year on Calypso.

With the massive amount of ore and enmatter, I was finding in a close area of each other. I did not need much more than something like that to turn this run into another profitable run. With the way my hunting has been going, it is tempting to just go full-time mining.

However, transportation back to Calypso and not getting looted and losing it all just to sell some of this still scares me. The other issue is a large percentage of my finds are Cyrene-only resources. While they have high markup on them. I don’t see them even being listed on Calypso or moving in large volumes on Cyrene that would warrant a massive mining operation being taken up. 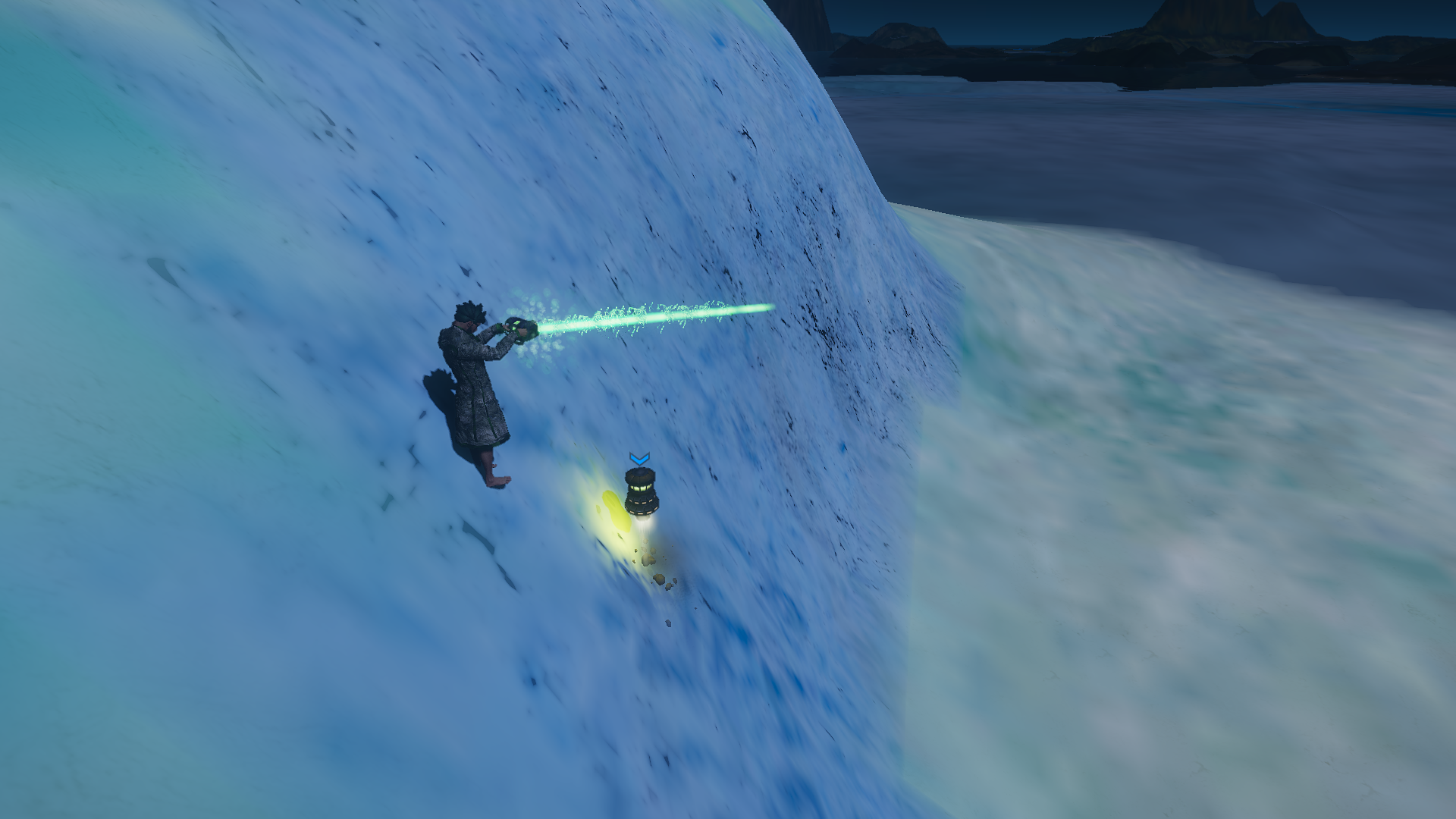 Then I found a size 14 that had 75 PED of Zorn Star Ore. These Cyrene ores and even enmatters sure do love to global on this planet. If only I could get a decent hit on some other things as well that I knew I could sell for some decent markup that would not take forever to sell.

This stuff ended up being a little up on a mountain. While I would usually just summon the claim down and mine it more on flat ground. It did not seem that hard of a spot to set myself up on. It was also going to take a while to extract it all.

I have started to do some research into finding a better mining extractor. It seems I can either take forever to mine things or save some money. On the other hand, I could extract things quickly but pay two or three times the decay.

Most seem to go with an extract that cost slightly more to use than the ones you buy off the trade vendors on most planets. It will extract a little faster so you are not sitting around for half an hour to an hour or more to mine out a global. It will do so at a slightly higher cost. At least then I would not be an (L) item and I could just repair it every trip.

Like all things in this game, there is an extreme side to things. There is a line of Genesis Star Excavators that have been modified or improved. They appear to drop off some summer event creatures as an extremely rare drop. Depending on the one you want it could be costing you $1k worth of PED to buy from another player.

There are quite a few items in-game many would consider being “career makers.” While having just an amazing extractor all on its own would not be enough. You once in a while find someone cashing out of this game selling an entire set of high-end mining gear: finder, extract, unlimited amp, and refiner. This marks the end of another amazing mining run. After markup, if things sold I would be up to 86% on this run. Even if I had not gotten that global I would have been slightly up. This is a true sign of a great run. If this keeps up who knows I might be investing in a lot of higher-end mining equipment. I just need to repeat quite a few more times.