Planet Cyrene is a place in Entropia Universe I have only briefly visited many years ago. It was time I gave the planet a proper exploration. Cyrene has a lot of amazing things to offer I just had to find them first.

Cyrene is one of the player-owned planets in Entropia Universe. Unlike some of the other player-owned planets and other objects in the game, they have over a long time made massive improvements to their planet. It has a development team and they even recently put out a patch. It seems every few months they adjust something that is slowly transforming the planet into a place many will end up calling home.

I am just a traveler of shorts and I’m not sure how long I will end up remaining here. It could be a few days or even weeks. While the planet is much smaller than say something like Calypso which I think is fair to say about the other planets as well. It is also quite a lot bigger than Crystal Palace or Monria that I’ve recently visited. Whenever I do come to a new planet or one that I’ve been away from for years I find it best just to explore it for a few hours. You don’t realize just how dependent you become on using teleporters to get around on a planet. Till you are somewhere you have yet to collect them.

I have not gotten every teleport as of yet. I have gotten enough of the main ones I’ll be using that it will help a lot getting around. Over time I’m sure I’ll pick up the remaining ones scattered all over the place. That will end up saving me a lot of time.

While Cyrene is a decently sized planet they have a lot of things going on. As such you tend to just find a couple of spawns of a creature for the most part. Some of the spawn areas seem to be quite tiny while others could have a few players hunting them.

I kind of prefer how they have it set up. It does not feel like they were just trying to fill vast empty space with the same creature over and over again that you see on other planets. Many of the areas fit the general theme they were going for as well. One such area is this swamp with pools of water and dread trees around it. While some of the finer detail is lost since I’m just flying over it from a decent distance. You can see some massive Jellyworms bobbing around there. 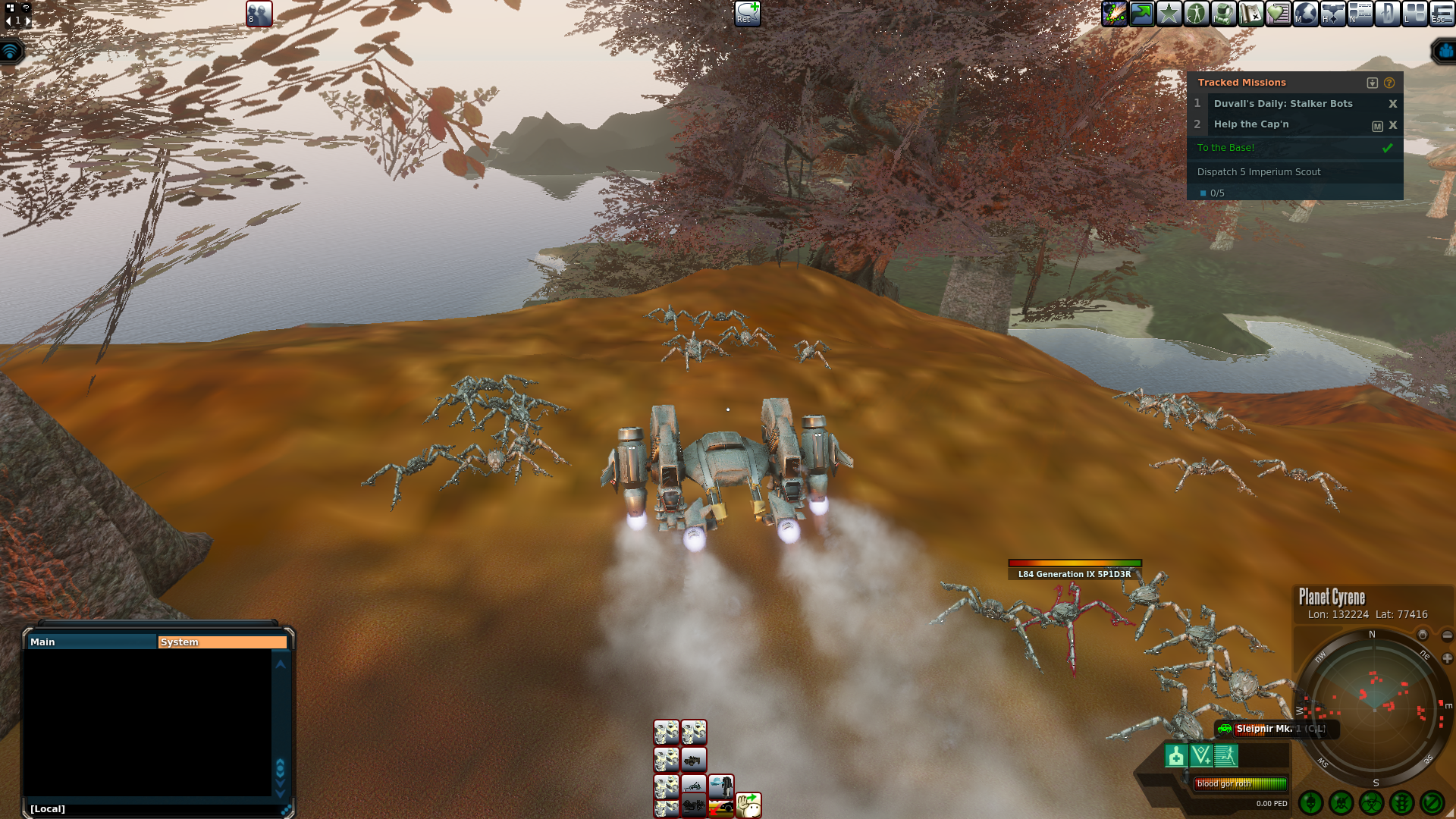 One thing I was somewhat surprised by was the number of higher-level creatures. I found many areas on this planet I would have no chance clearing let alone attempting to kill something. I also don’t exactly have the right kind of gear to fight a large number of robots and other things lurking on the surface.

This planet can more than hold its own. It even has its special gear and weapons. Some of it seems like it is quite hard to get. Not something someone only looking to spend a few days here would acquire. It is however amazing this game has some very long mission chains among other things for those who choose to stay for a while.

That also appears to be an element they have slowly worked on over the years. Some blueprints use the local-only found on Cyrene materials. That however feels like a work in progress. Some of the stuff has sweet markup as well just not a large volume of it selling. While other stuff has no monthly sales.

This is in part why I brought my supplies such as guns and some other things. While there are players that live here and some places to check out shops. It can be hard to find a particular item if the need arises. One thing I liked is how easy it is to spot the teleporter that is placed on a platform. There is also a building that holds an auction house, trade terminal, repair, storage, and some other things. Sometimes you can find other things as well.

While not every teleporter was set up like this. it made them easy to spot from a far distance away. The bottom platform it all sitting on is quite a large object that loads in from a decent distance. It’s nice not having to play a game with a detective to find a teleporter. There was also enough diversity of ecosystems to keep you from getting bored of the same old same old. You can see in this single screenshot a forest below, a desert ahead of me, rivers, and mountains. While not every area is as diverse as this one it keeps things refreshing.

One area I did my best to stay away from for certain was the lootable toxic PvP area of the volcano island. You need to buy a shot off the vender just to enter without getting killed and when you get die you lose the buff it grants. This planet also has quite a few missions trying to lure the player in there.

While in general, I’m not a big fan of PvP. Once you add in the element of the game of it being a real cash economy and any loot on me is worth real money that cost me money to acquire. I don’t want to go near the darn thing! Not all of my exploration was done by ship either. Sometimes nothing beats just getting out and walking around. Even for an older game, it’s breathtaking in its way once the details start to load in. Not everything I found was on the surface of the planet either. You might be wondering why is my character just in his boxers? Why he is running? Why is the PvP icon red? Perhaps I’ll talk about this place at some point. This was not the only indoor place I found as well in my explorations. There is some instance where you can just hunt a single creature inside them. This seems like a great way to handle if there are too many players camping a couple of spawns of something.

There are even some instances and areas I simply lack the requirements to get into for the time being. Some of them I might be able to get the required items while I’m here at this time. Others I might end up working on over a couple of trips and have them next year unlocked possibly. Always quite fun when you get to explore new areas in a video game. This planet is quite interesting just to explore and there are many things I’ve yet to see as well. It was also nice picking up a few teleporter points that will save me a lot of time getting around in the future as I dash forward trying to conquer this planet.