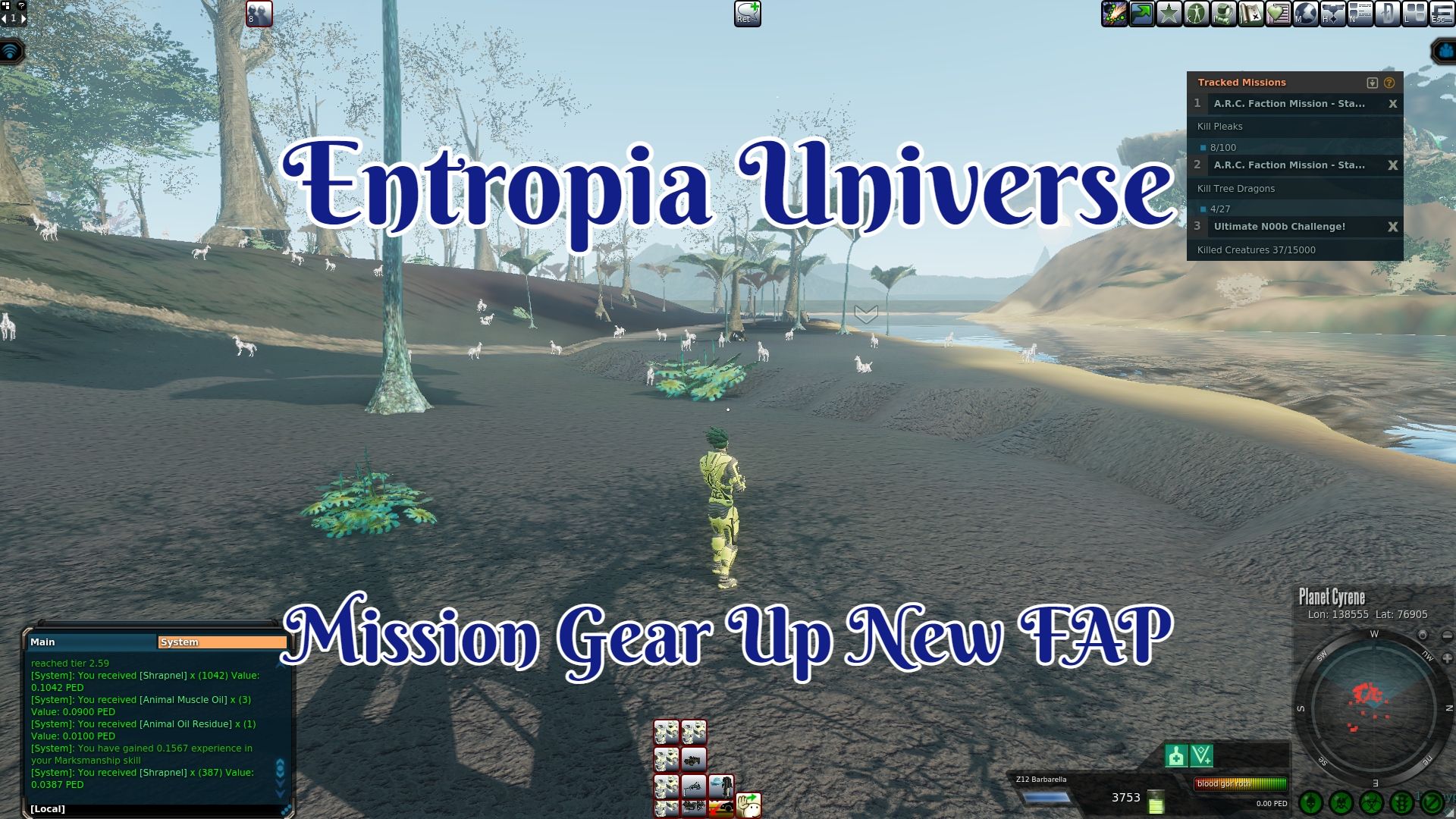 One of my goals while on Planet Cyrene is to get a new healing device that I’ll be using daily. This will be something I use for small hunts and out-of-combat healing for the most part. It has quite an interesting heal-over-time effect and is a lot more eco than what I currently use for such situations.

For those who read my Entropia Universe content but don’t play the game. You might notice I used the word FAP instead of my normal word usage of “healing tool” or “device.” Sometimes in-game word usage can get misunderstood for something else outside of the game for those not in the know.

Entropia Universe is quite an older game. Many words and even acronyms are used quite a lot in-game that have not always aged well. Outside of the game, it’s best to choose something else or you will find yourself in some strange conversations. At least FAP in this instance is referring to the Fast Aid Pack. It is also not the worst acronym that can be misunderstood as meaning something else. My main healing FAP out of emergencies is a 10-Pulse Unit. If you are a newer player of Entropia Universe you might be wondering why I don’t at least have a Vivo S10 to replace it since that is better? Sadly I’m an older player and my professions are so high level I’m not permitted in the instance to get an S10 on Calypso. I have been somewhat bummed about this situation of not being able to get an S10 for a while. Thankfully there is a solution! Planet Cyrene has a mission chain to earn and upgrade a FAP called Refreshed H.E.A.R.T and the Rank VI of it is almost 70% more eco in the right situation over my old 10-Pulse. It is even a massive upgrade over the S10 that most of the newer players have as well!

This post will be going over the first two missions in the chain. Both of them are collection missions and you do not have to pick up the items personally by hunting them yourself. You can just buy them off the auction house from other players if there are any and turn them in. These two items are 200 Bone and 75 Bone-In Meat. Thankfully there are quite a few different creatures on Cyrene that drop bones. They are however going to be quite a grind to get. In my testing, while I was working on other missions and the codex of these creatures I did not feel I would get that 200 bones in under 1k PED of Ammo cycled if not double that depending on what I was hunting.

If you are going to grind for the bones you should check to see if the creature you prefer is in a spot on Atlas Hunting Grounds that counts for the 15k kill you need for the Ultimate N00b Challenge if you are doing that. Those spots are however usually heavily camped which is why I was in other areas for a few of the creatures that drop bones that are also in on that island. 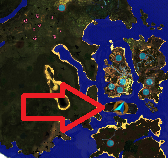 From my short-term testing if you wanted to grind something for perhaps a week depending on how active you are or longer Arret seeded like the best way to go for farming bones. You might even get lucky and get 200 bones in under 1k PED of ammo cycled.

These are also really easy creatures to kill. You can farm them with any lower-level gun you have without much of an issue. It will just take you a long time to grind that many bones on them. You will also need to travel a little bit for repairs. One tactic you should always be looking to deploy when working on a long mission chance such as this is getting credit for a bunch of things all at once. You should be doing your best to stack missions.

In this location, I’m at (137767, 77020) while it’s not on Atlas Hunting Grounds there is an NPC close by that gives you a Puny Tempo Trail to kill 30 puny Tree Dragons in 15 minutes. There were also more than enough here at the spawn for how quickly I was killing them.

If there are other players you will run out of things to hunt here quickly. In my run of it, I found it less buys than Atlas Hunting Grounds. If that occurs you can always try flying around in the local area to see what else there is.

I found these to be rather easy to kill and have around the same drop rate as Young Arret. It was just not as good of a spot as the one I found for Arrent. 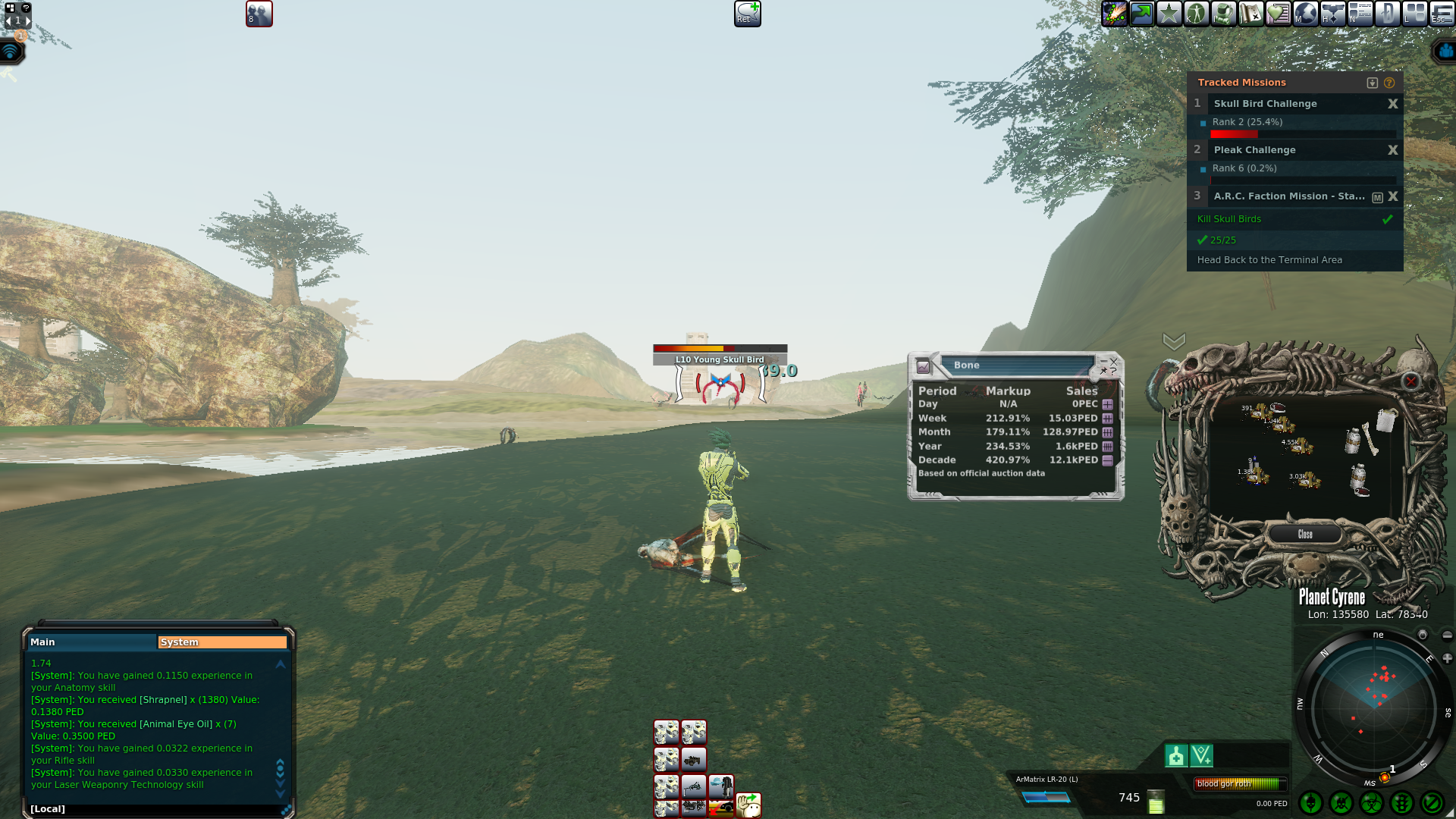 For those looking for something a little bigger to hunt Young Skull Bird has 240 health. While they are a 100% impact damage creature I found myself making quick work of them with an Armatrix LR-20 (L).

Do however expect that as you step up in creature size and it costs more to kill that you will need to cycle more PED for the same amount of bones as the lower-level creatures. That was at least my experience when I was farming them for codex. 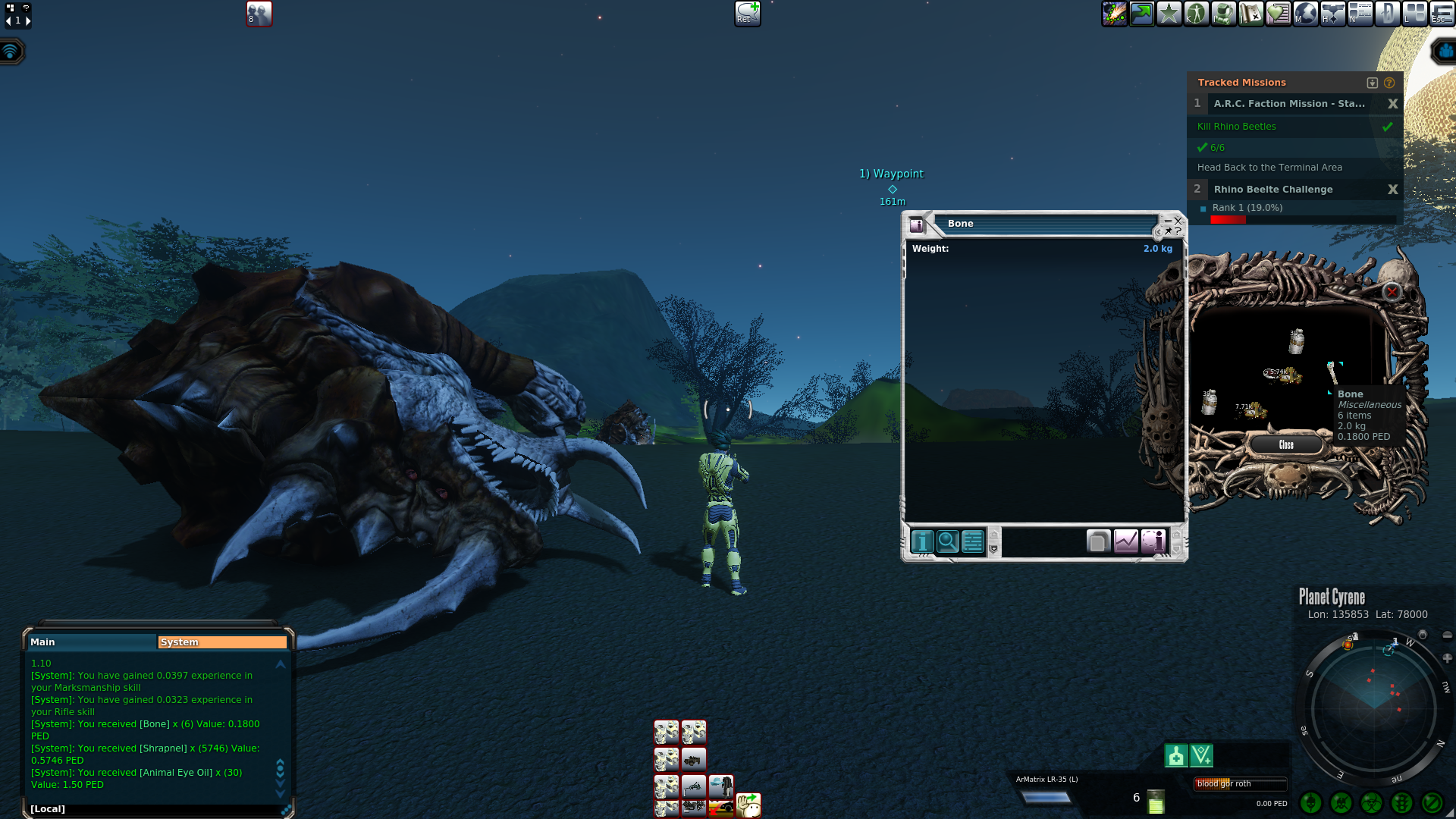 These things start at 1k health and go slightly higher. The biggest thing I could see in hunting these are getting a larger amount sometimes of bones to drop. As you can see in the screenshot I got 6 bones instead of the 1, 2, or 3 you find with the other creatures.

You also tend to see these getting a few global on them a day with being a bigger creature. Unless you are also trying to grind for a full set of Ozpyn Beetle/Force (L) sets. The other creatures will yield a much better return for bones.

After my couple of rounds of cycling on them for other missions and the codex, it was starting to look like I would need to cycle several thousands of PED worth of ammo to get 200 bones. That is however quite a small sample size and your luck could very.

If I was someone who had a larger budget to play with and I did not want to spend all week grinding away for 200 bones. Along with buying them off the auction house was not an option. These would be quite fun to grind. This is one I don’t recommend trying to farm as I feel most players lack the armor to even attempt them. They deal 80% electric damage and while that all on its own would not be so bad it only drops off the higher maturity ones that appear.

I did attempt to farm some lower maturity Sea Wraith since that I could tank the damage and kill quickly enough I was not having to heal all the time. I never did get any bones which make me conclude they might be only on the higher maturity.

That however would be a bit strange and out of character when compared to the other creatures you can hunt for bones. I simply lacked having enough electric protection in wanting to give a fair hunt to see if I could get any bones. For Bone-In Meat there is only one creature that I’m aware of that dropped the item and that is Tide Claw. Thankfully you only need 75 Bone-In Meat and as you can see in the screenshot I looted 2 at once. There are also a few different locations of these creatures I ended up farming them around (137206, 77872) which was not too far away from a teleport.

You might also notice Tide Claw tend to be one of the activity hunted things on Cyrene as in a day I can often see different people getting a global off them. The several times I went out to hunt them while I did not get a global the loot was halfway decent.

Of the two this would be the one I’d choose to grind to get in a couple of days. I’m not quite certain how much ammo you might end up cycling to get all 75. As I decided to go a different route than farming all of them. Once you have 200 Bones and 75 Bone-In Meat it’s time to turn them in and finish the first two stages of this mission chain Gear Up New FAP. The NPC Medical Tech Orandius can be found at (138451, 77292) near 0x101 Supply Depot Teleporter on Planet Cyrene.

You do not need to talk to him before gathering these resources. I ended up buying a fair amount of what I was missing once I had grinded out the codex of each of the creatures above to a satisfactory point.

These items for lower players can be a great thing to farm for. As you imagine there is often a player not looking to grind 200 bones which can take quite a long time. This is one of many things I feel Planet Cyrene in Entropia Universe is doing well to create an ecosystem. 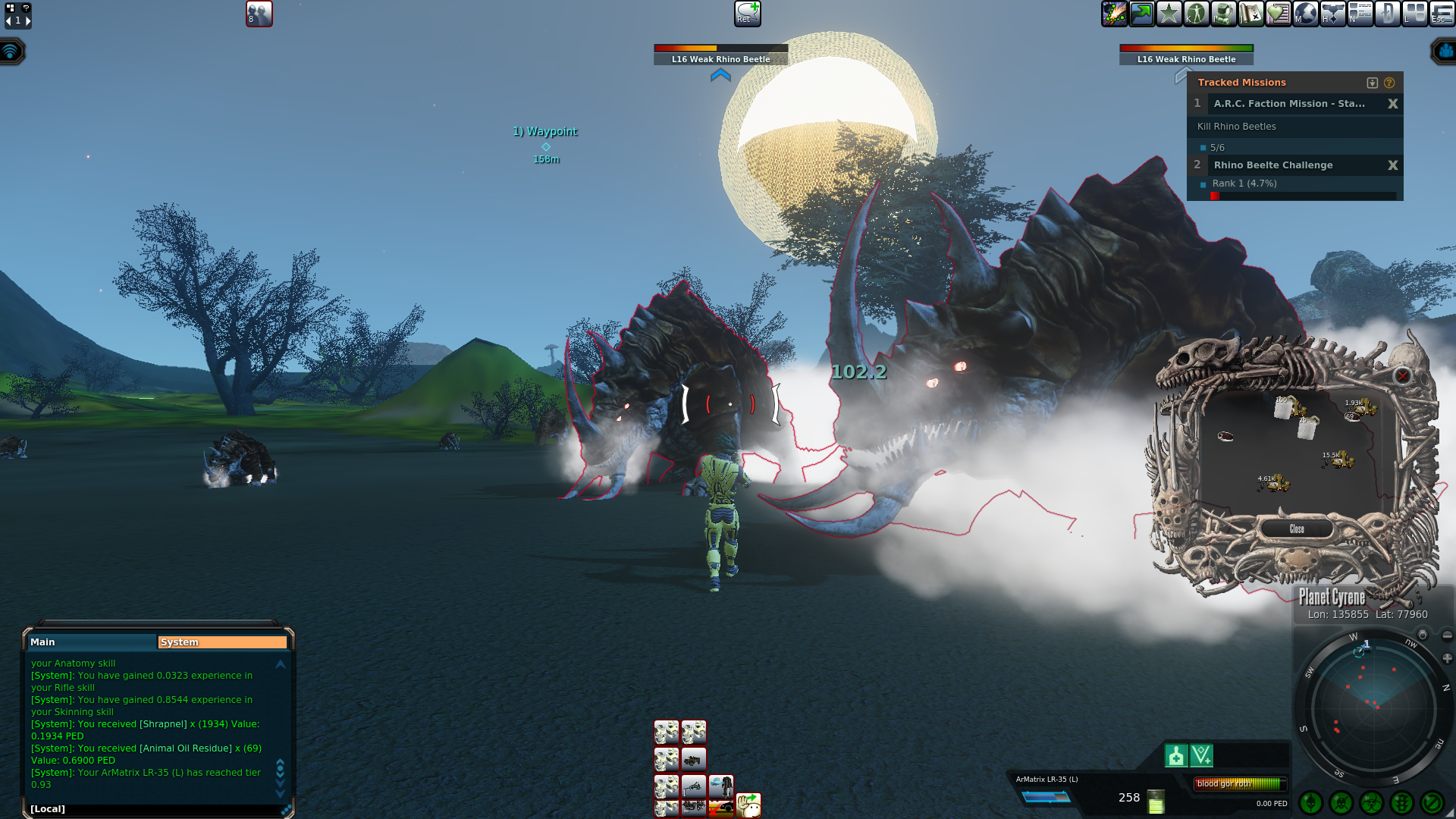 Depending on what route you went this either takes you a few days or just a couple of clicks at the auction house. The remaining parts of the mission chain are all killing quests that you have to do yourself and will be converted in the next post.