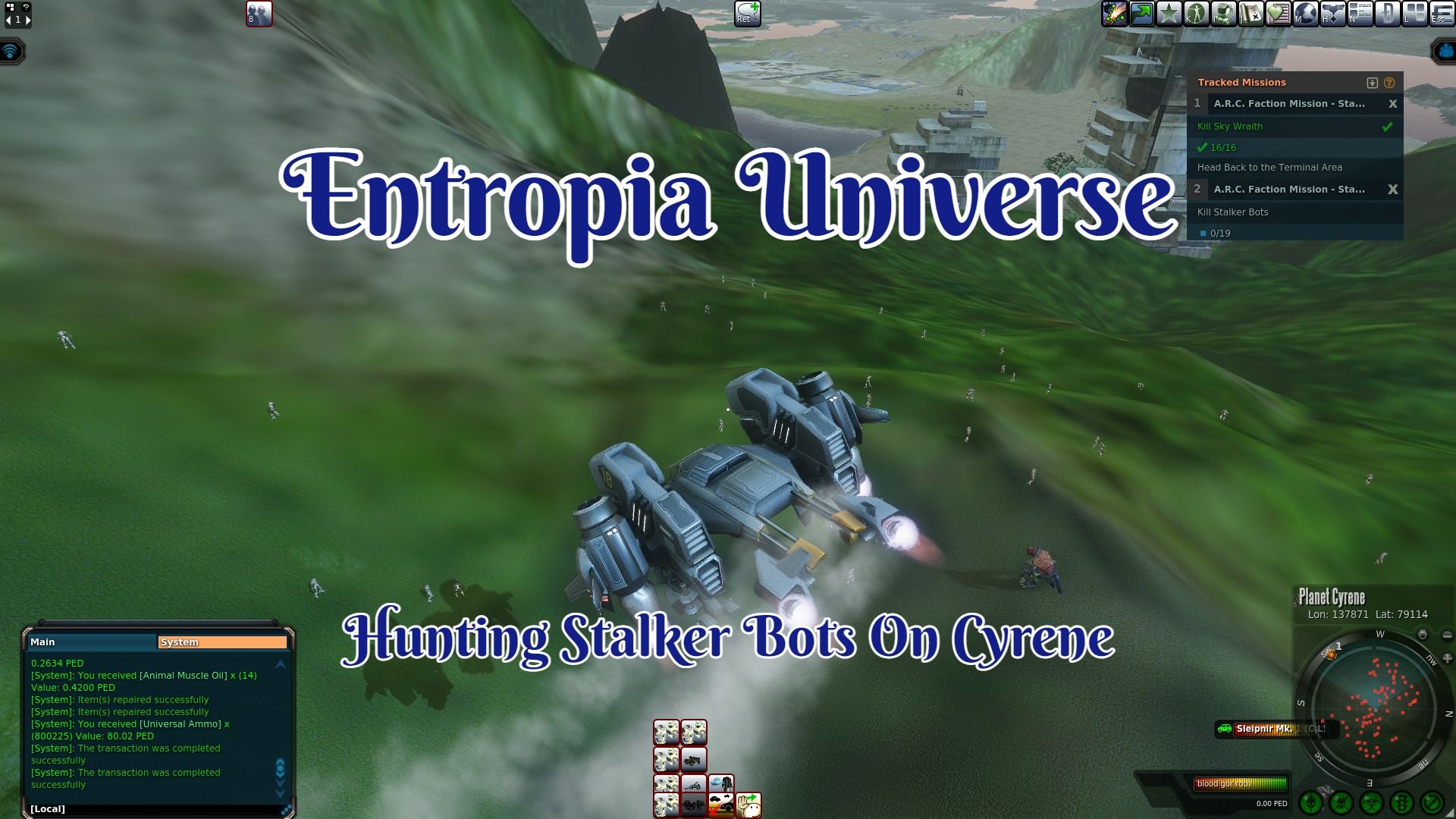 It has been a while since I’ve hunted robots in Entropia Universe. While since returning I’ve shot a few for missions and that sort of thing. I however never went out and got the proper gear to deal with them. Since they are often not something I deal with.

I recall back in the day, hunting robots for a while was my bread and butter of that era. While trying to find something to hunt and skill off back then when I could barely hold a gun it was recommended I hut some robots. They had some decent markup on them which is why I suspect my mentor sent me their way.

While I won’t be hunting what I did back then since these creatures did not even around back then. Most “pure” robots these days I don’t have the gear for. Since Stalker robots are humanoids they deal stab, cut, and impact damage.

While on my way to hunting some for A.R.C badges I found this amazing spot with an insane amount of them. There was no way I was not going to grind them out for a bit even once I got the badges. It also helps there is a daily mission that rewards evade skills for killing 150 of them.

Cyrene is one of those planets where they have integrated decently a lot of the creature specific only drops. This has resulted in those drops sometimes having decent markup on them. I could also use many of those drops of which many I still have no idea what I’ll be needing. 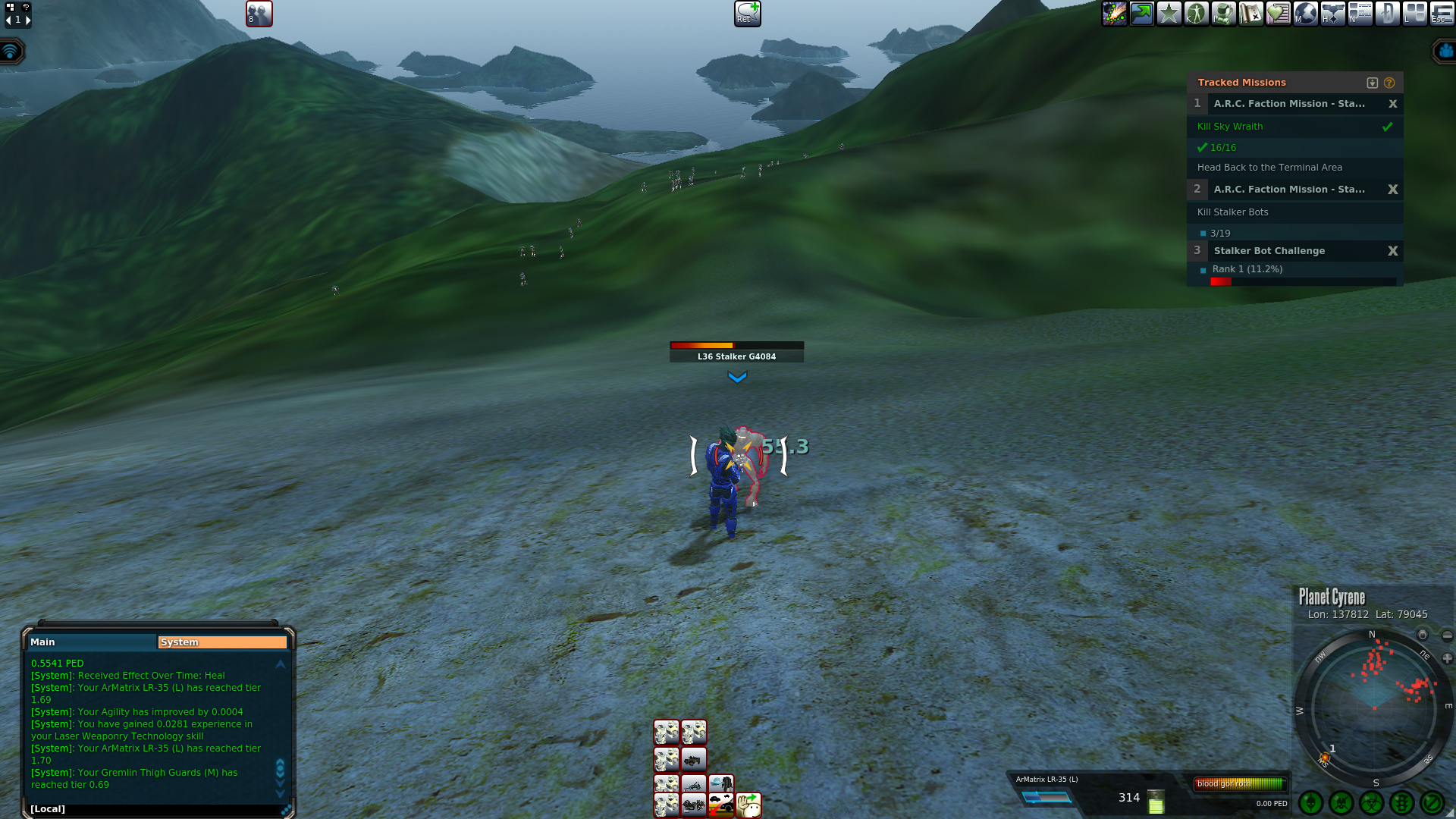 Stalkers only come in three maturity levels to hunt. For a bit part of my hunt, I decided I would give the hardest of them a Stalker G4084 a try. They are level 36 and I was in the mood to hunt something higher level on Cyrene for a while now.

I did need to put on my Gremlin with 5B plates to help deal with the damage they dealt. This hunt also allowed me to give my newly acquired healing device proper testing to see how it handles out in the field.

A lot of what I’ve been hunting on a daily rarely requires me to do a lot of healing. While I might sometimes bring out the bigger gun to bring smaller things down quickly as long as I’m not overkilling by using a finishing gun. My Gremlin for the most part has only been worn a couple of times since I’ve arrived on this plant. 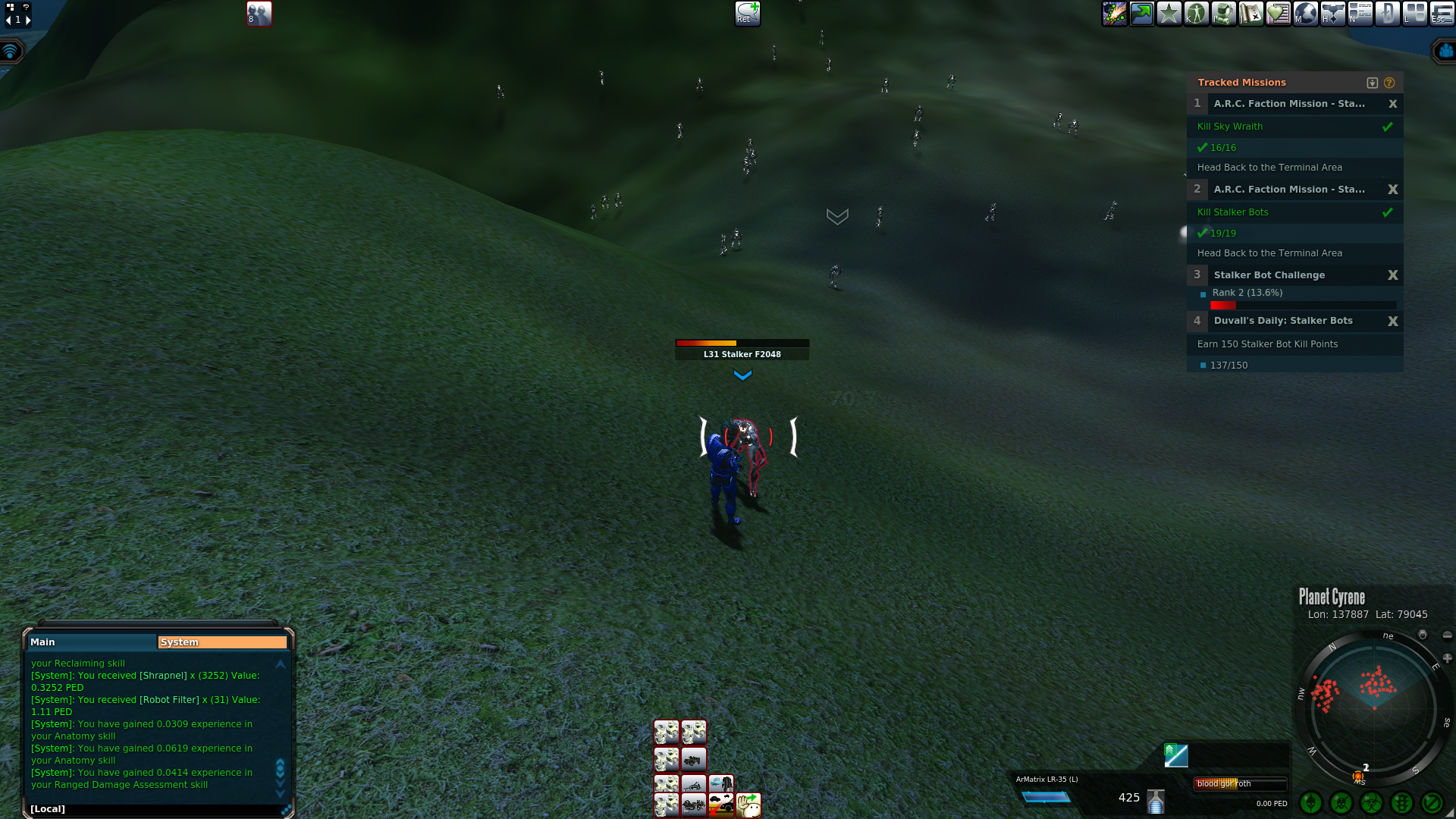 A decently way through the hunt I decided to switch it up and hunt the next maturity lower Stalker F2048. Being level 31 they were cheaper to kill and I would not need to be doing as much healing as I had been. I wanted to make sure I could get enough kills to finish off my days before I ran out of ammo.

The mountain these are on provides a decent advantage point for pulling things uphill to hunt. There was also no shortage of them either. Which made this place amazing. Even if others had been up here there would have been plenty to go around.

I also found myself right in between the two maturities of robots I was fighting. It was just ten or so steps to the right and I was in another spot. That spot however had some issues. Mixed in with these Stalker was another creature. While it was not hard to kill they got annoying.

After a while, the spawn of the robots ended up shifting up a little onto the mountain. Which was putting me closer than I would have liked for respawns. I would even get some of the non-stalker creatures spawning on me as well during a fight.

Once I had enough kills to finish off everything I came here for I switch over for the last few shots onto the G4084 again. The loot was not that great. They dropped a lot of common robot drops that you can get on any planet.

I was hunting Stalkers mostly for an off chance at getting a High-Grade Power Supply. A lot of the stuff did not have much markup that I ended up getting. It also did not seem like stuff I could sell with easy on Cyrene. One thing I have not fully worked out yet is the logistics of getting goods to Calypso if I decided to go that route or find a way to sell them.

If the daily reward was a bit higher in how much evade I could get I might consider putting Stalkers onto some kind of daily or weekly hunting rotation. However due to how much health they have and the fact that they only drop as far as I’m aware one or two items I’m looking for over the long run on Cyrene. It looks like they won’t be cutting something I’ll be hunting often.

I have still yet to find that creature since I’ve been here that I want to hunt when I don’t have much else going on. On Calypso, I have a couple of favorites. Perhaps in time, I’ll find something I enjoy. I also need to work on a shopping list of what I need to farm in the long run and have more hunts like these in the future.