It’s not every day I end up on the daily Hall Of Fame. While it was nothing that massive it’s always great to get one. Up till this mining run, I had yet to get a single mining global since I’ve returned to the game.

I was back at it again mining all over the place on planet Cyrene trying to better understand where I find different ores and enmatters. If you did not catch my first mining run here make sure to catch up first.

I would yet again be doing double drop mining. The areas I ended up mining around ended up going a lot better than my other ran. Granted that last run was decent as well. It however holds no candle to this one. My first find of the day ended up being double. While a size 4 on ore is not that great. It started this run-off in the green. The enmatter was just a size 3 rather standard for what you expect to find most of the time.

During this run, I was thinking about how I missed the old days of mining. While mining was never crazy ups and downs as you could expect with something like hunting. It seems like mining had changed a lot. I have yet to get a single global while mining and could not think of the last time I ever did. It had to be quite a few years ago.

Unless you are amp mining which increases the amount of decay and cost you are paying per probe drop. Getting a global is not expected that often in mining. At least from my own experience. I have never been a huge fan of amp mining. Every time I’ve used an amp it never went well.

Unless you are rich and can afford it or one of the very few players in-game to have found an unlimited version of it. Instead, most players who amp mine buy limited amps that can’t be repaired. That extra markup you pay can cut heavily into the bottom line. While there are situations where the markup of things you are mining could be worth it.

A lot of times those places either end up getting balance or the markets self-correct over the long run. If you are paying a 5 to 10% markup on an amp and it accounts for most of your cost. It only takes a couple of extra drops of nothing than what you tend to get for it to go south real quick.

As such, I was not using an amp for this run. This makes this even better in a way as I got a global the natural way you could say. Which is a moment for celebration. 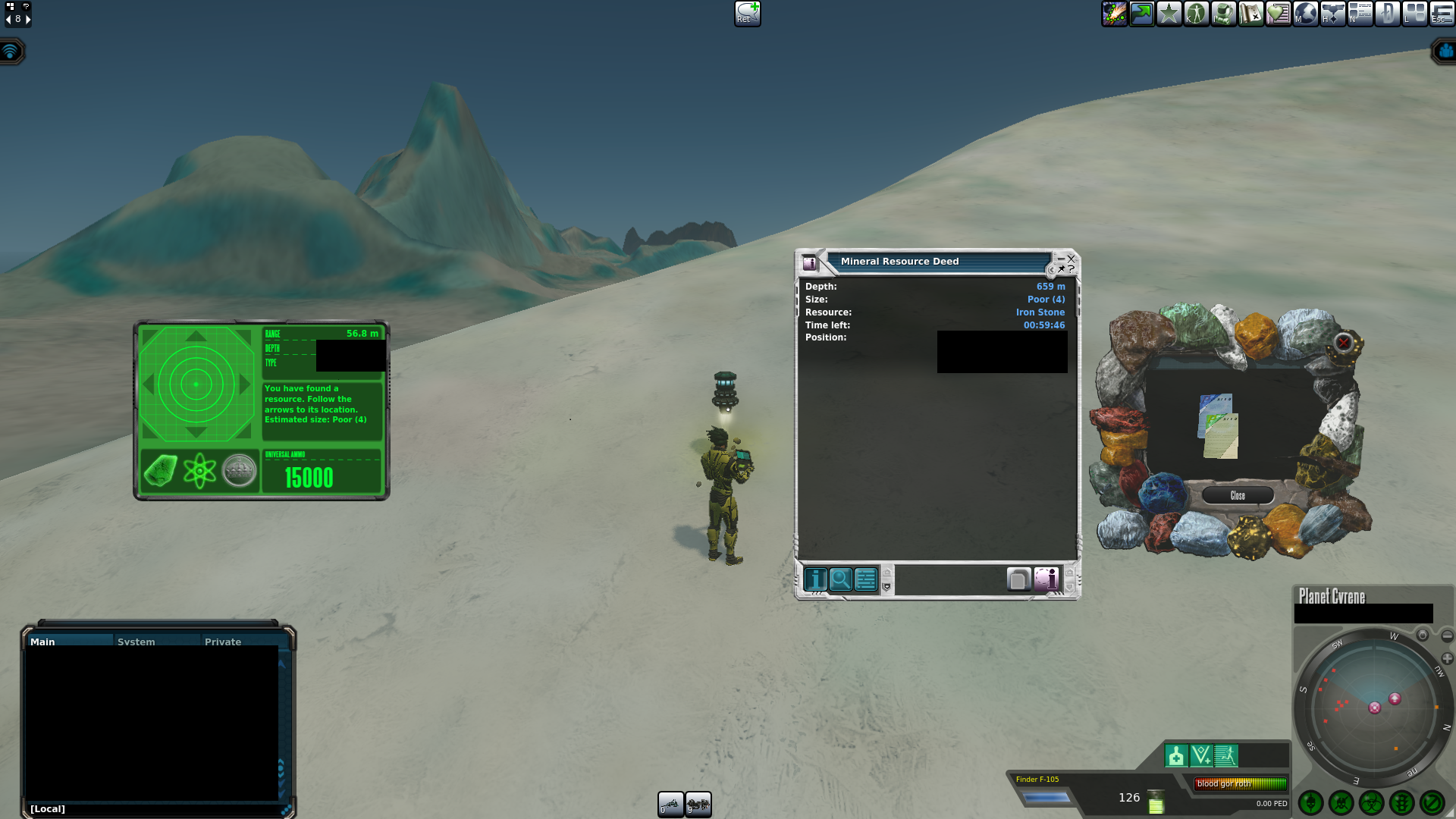 This run all on its own could have been called the double find run. I was just having some ridiculous luck finding both an enmatter and an ore drop quite a few times throughout out. Some of it was even standard finds as well which I was needing more of at this point than only the stuff that can be found on Cyrene. Not even halfway into the run I ended up finding a size 9 enmatter. When it comes to enmatter since they are half the probe usage cost as ore. As a result, you tend to expect much smaller finds than the ore itself. This all on its self could have been different from a break-even or profitable run and one in the red.

This time around I found myself mining in quite a few smaller areas than the first run. It involved flying around a lot more. There were also fewer open areas due to the spawn of creatures I would sometimes run into.

I was not getting the usual mining coverage that I tend to go for. I prefer to just cover an entire area if I can with probes before moving on. Some miners on the other hand will change locations every other drop and spend more time traveling to the next location than actual mining. 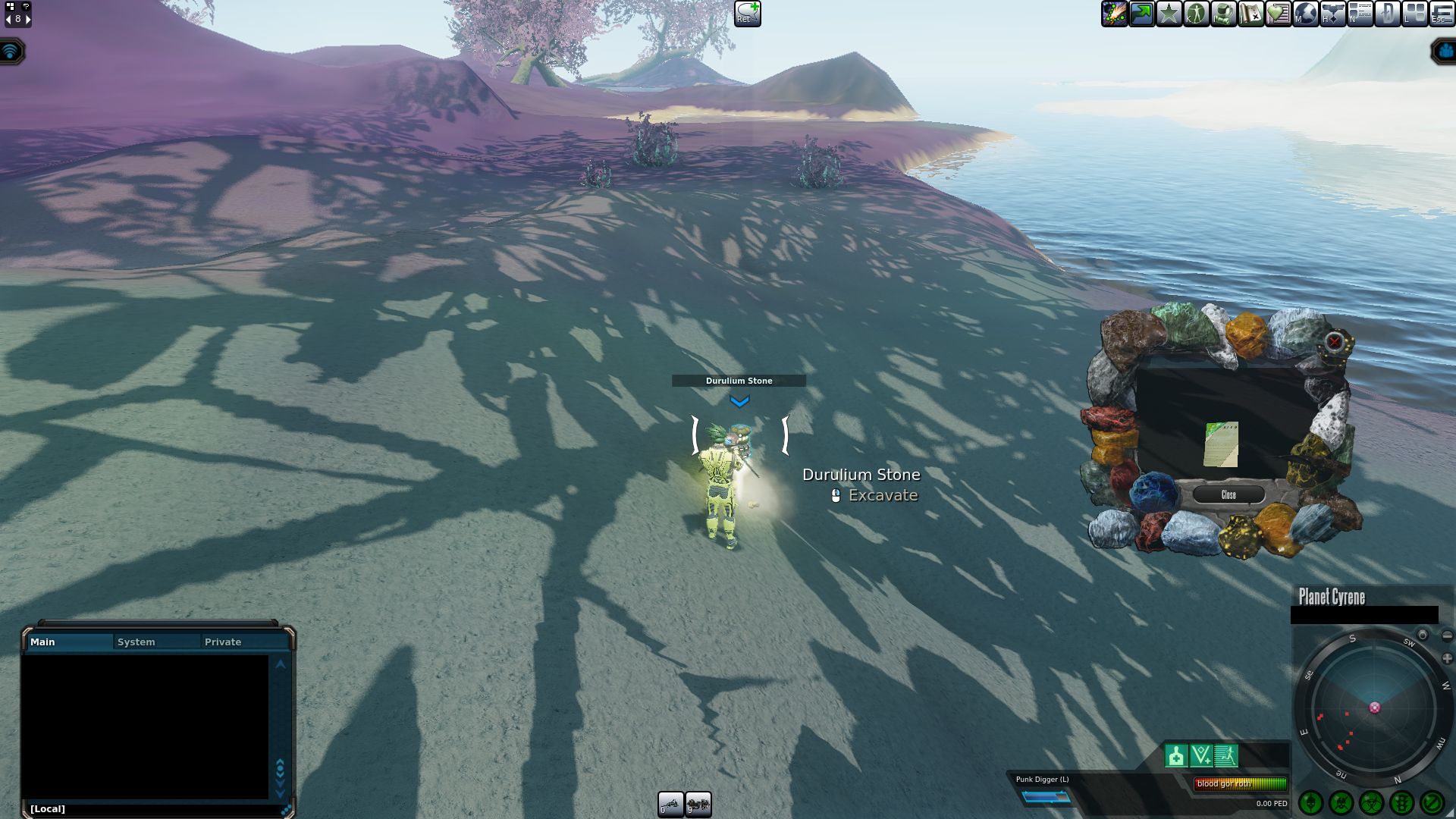 I was mostly happy I was finding things other than Cyrene materials. I don’t think I even need Durulium here. However, it sells for over 116% once refined and I’ll take ores like that all day long.

This run ended up being quite late at night or early in the morning depending on how you looked at it run. I was quite tired and lazy. I was mostly staying away from anything I could get aggression on. I more or less just wanted a general idea of where I could find a few different ores and enmatter and that was it for the area.

As such I was just flying around: Stopping, getting out, dropping a probe, and waiting. Sometimes I would find a claim and go mine it. Other times if nothing was found I would get back into my ship and fly further a little bit repeating the process over again. 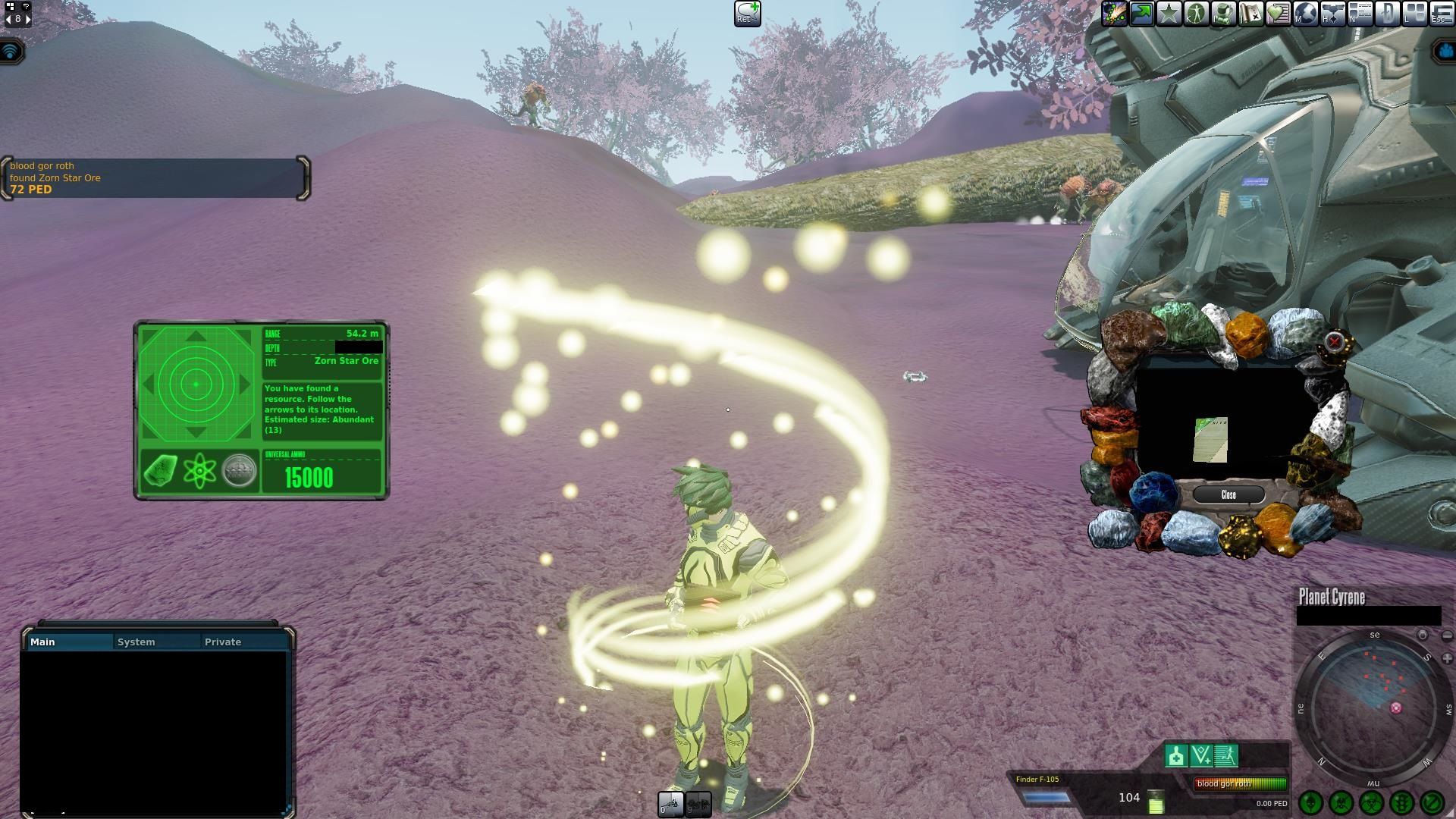 Then it happened. I found an abundant size 13 of Zorn Star Ore. While 72 PED of the stuff is not much I was half expecting to check to see if it was only the bare minimum of 50 PED to get global. This was the perfect ending to the day. I’m just using a very basic (L) mining extractor. It was nearly broken but thankfully it lasted long enough to finish mining this claim out. It was only getting 0.330 to 0.410 PED per cycle. So it took a few minutes to mine it all.

A short while later I got a message that they were taking down the servers in 50 minutes or so. I must have missed the hour call for it. I had no idea they were even going to do maintenance and it was getting crazy late.

I was so tired I was already dreaming of my head resting on a pillow. I knew if I closed my eyes I’d be waking up forehead smashed into the keyboard. It was time to call it a night even the game was telling me so.

The last thing you want to be doing when needing to go to bed and the server coming down for who knows how long is get a mining claim you can’t finish in time. Depending on the size of the mining claim it might only last an hour or weeks. More than not just an hour.

If you don’t mine the claim in time whatever remains is gone for good. I have no idea if they add a little extra time to mining claims, if time freezes for the offline time, or what. I have never tempted fate to find out.

I had a couple of probes left for this run and then I was going to log out before they took things offline. Turns out the game had other plans for me.

Most of the time when I get out of my ship I at least move myself a little bit. That way if I was ever to get a global I’d get a nice little screenshot of it zoomed out a little bit. Not this time around. My screen lit up in a blinding light. I was so tired and confused I didn’t know what was going on. I noticed the message at the top saying I had a mission update for mining yellow crystal.

I saw the finder reading that I had found a small size 5 of Lysterium stone. I needed that stuff so I was already thrilled about the situation.

Then the Little Big Mining Log application I use for tracking mining-related stuff said: “Congratulations on the global” or whatever he says. I was like WHAT? I mean I did see the swirls on my screen. However, the finder said size 5. A global?

What I did not notice was the ticker that said I had found a 208 PED global. You might also notice as I did that there was a lot bigger swirled on my screen. I ended up getting myself on the 24-hour Hall Of Fame board.

If this would have been hunting for sure 208 PED would not have been a Hall of Fame unless you got it right at the daily restart time. For mining on the other hand unless you are using amps getting a global is so rare there is a much lower threshold in a typical day to get listed.

Now fear starts to set in for my sleepy brain. How much time do I have to mine this? While I should have known the answer I was a little concerned it was only going to be a few hours. If that was the case I would have to stay up for who knows how long to finish mining this thing.

I had 24 hours to mine it. This was also on an enmatter which is even harder to get something of this size on. I was not quite sure I could mine it all in time with the 45 minutes or so I had remaining. At least I knew I could come back later in the day and finish mining if I needed.

This was also a double claim drop. Since the size 5 ore claim was only going last an hour I decided after a few digging cycles on my Hall of Fame (HoF) I would go get it out of the ground while I still could.

Not long after that my mining digger broke. I knew it was going to be so. I don’t know why I have not bought a better digger by now than using the ones that come out of the trading terminal. I guess I’ll be doing some research into a cheap unlimited one to buy and put part of this runs profit towards that investment into a tool.

I had like 40 minutes remaining before downtime. I flew off to buy a new basic (L) digger just to see how much I could collect before it was lights out.

At the five-minute mark before the server shutdown, I finished mining the claim. Dang, that thing took a while. Lesson learned to get a better digger so I’m not sitting around for almost an hour collecting 0.270 PED of a 208 PED claim at a time.

As if all of that was not enough. I had done so much digging I got enough skill gains that it finished off my current level of a health point. It’s not every day your health increases by one point at least for me it’s not. 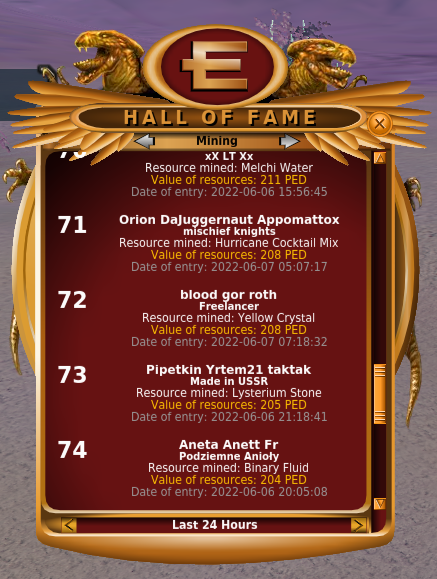 I logged out as soon as I was done mining the claim. I crashed face-first into my pillow and I don’t recall having any issues falling asleep. I was out cold. That had exhausted me so much.

I logged in the next day and went to move my character around. I then realized I had yet to put my mining run into storage. My character was so over-cumbered that he could barely move. I also needed to tally up the run and see how it went.

Assuming everything I got sells for reasonable markup I should end up over 276% on that run. I did take in a bit more decay on my tools having to dig out HoF. This more than puts me into the sold green position for mining since I’ve returned.

I could not even tell you the last time I got a mining HoF without an amp. I’m not even sure I have but I use to mine a lot so I must have at some point. It was an amazing and crazy run getting two globals during it when I had not gotten a mining global in quite some time.