Hypothetically on paper, I’ve made out like a bandit mining on Cyrene. In actual results, however, I’m stuck with a low turnover rate of inventory. I also did get lucky with some of the finds I found in terms of size. It was quite a fun overall planet to mine on.

Mining in Entropia Universe has always been my money maker in this game. While over the years some crafting changes killed the markup on ores and enmatters on the basic finds that are found on Calypso and everywhere else.

The planetary partners on the other hand have been putting in some efforts to make their ores and enmatters not as worthless as they use to be. Cyrene attempted to do this by requiring them to turn in missions in small amounts for things like Mission tokens. Slightly bigger amounts for turn-ins for armor and armor plating missions. Finally, the biggest use for them is crafting from completing daily missions to different kinds of weapons, armor, and vehicles.

While a few of their ores and enmatters for the more common finds tend to trend somewhere between 105 to 110% markup. That usually depends on how hard mined the planet has been. When someone shows up with massive amps and goes crazy there is not enough demand.

For many of the missions since you need to go out and find mining claims yourself anyways once you reach 200 A.R.C Faction Badges and unlock some daily mining tasks as I’ve noticed in my guide.

As a result that rather balances out the supply and demand for the more common ores and enmatters on Cyrene regarding the common finds if not increase the supply side of things. Something like Clear Crystal which I never found tends to have a high markup for a reason. It along with some of the other more “rare” claims on Cyrene I would hope would be selling on the planet itself. 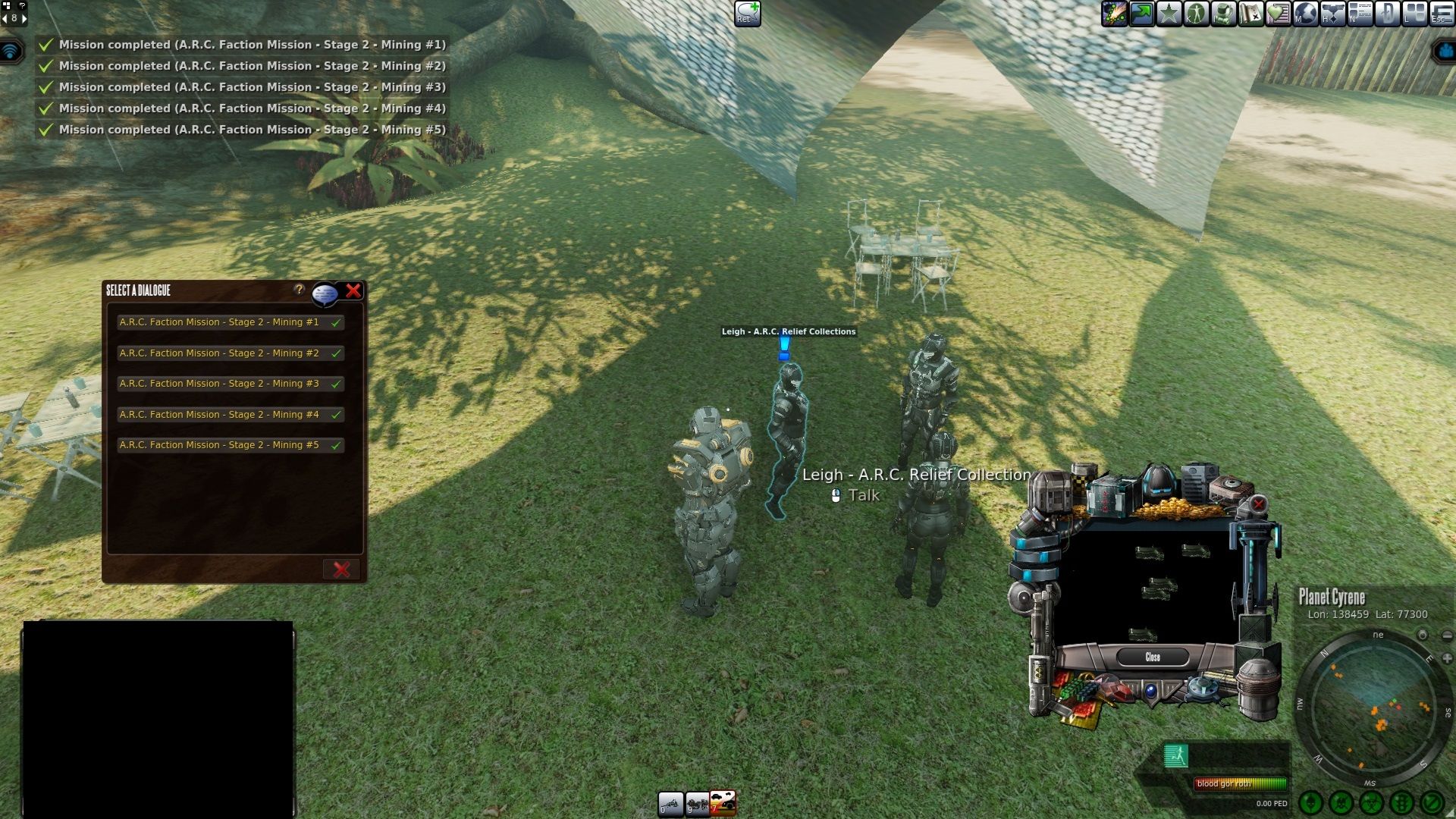 One thing not taken into consideration in value I looted since it’s non-tradable are all the A.R.C Faction Badges I acquired along the way from my mining activities. While I could attempt to assign these a value cost my mining was in general in the green 80% of my runs. I could turn to my hunting costs for acquiring the same amount of badges however that I don’t feel is a great comparison. These were also not sunk costs either just rather a cherry on top for what I would have done anyways 90% of the time. So I’m considering them a nonmonetary asset.

While I did not find Clear Crystal I did find some other things such as Wiles Stone, Sothorite Ore, Ycyan Ore, and many other finds I believe to be the least uncommon if not rare based on how few of them were found. Sadly like all the other Cyrene materials like Blue Crystal, Zorn Star Ore, and yellow Crystal among many others they mostly did not sell in their first 7-week listing or even the second one more times than not. What I was expecting was a lot more of the Entropia Universe ores and enmatters that are found on every planet to not sell that quick or at all on Cyrene. Most players have come into the habit of just bringing everything back to Calypso where the biggest market is. So I not only brought back the normal finds but the Cyrene only stuff to Calypso after paying a secure transportation service to get me safely home.

Once there I also started to refine up the bulk of my finds. That is when I realized just how expensive something like refining Zorn Star Ore ends up being. I spent over 15 PED alone refining that up. For only a small amount after a couple of attempts to even sell on Calypso not covering the refining costs as of yet.

Excluding refining costs, listing fees, and transportation costs on paper hypothetically. The returns are expected to be 132% from over 16 runs. This also included a bunch of smaller random probe drops checking out a different area or trying to just target certain mining resources for daily missions.

I was rather shocked by that result as I was double dropping (aka dropping both an ore and enmatter probe.) This is not a practice I engage in often but how Cyrene is laid out for the resource table seems to have worked out in my favor at least in the short term.

While I will keep attempting to list small amounts of the Cyrene only materials I acquired by relisting them over and over on Calypso auction house. There will become a point where the listing fees are just eating into too much of any possible markup profit. The other issue I’ve run into is I have a very large amount of my liquidity tied up in Cyrene ores and enmatters among other things. While that was fine at first I’ve come to a point where I could use that liquidity elsewhere on other planets and go on other adventures.

If I just consider markup a total loss on what I’ve not sold yet and vendor it. Along with my best understanding of my refining costs, listing fees, and transportation fees my profit would be in the range of around 123%.

A decent part of why there was such a huge decrease from 132% down to 123% is because my largest finds on Cyrene were Cyrene-only materials. If I was to remove some of my biggest finds altogether claiming they were “luck” in wanting to better understand how my numbers would have been without them. This would have dropped my total returns down to 110%.

There is also the crafting and mission needs side of things I had. I did need many of the ore and enmatters I found on Cyrene for my day-to-day activities. Just not in the quality that I farmed them at. So there was a little cost saving from markup in doing mining myself.

I did attempt to solve my issue of low inventory turnover by crafting both intermediate and final goods that many of these resources are used. At least the best I could with my low crafting skills and what blueprints I could acquire. Those goods as well sat unsold for the most part.

The good news is I yet again had some usage for those intermediate and final goods. It was however again nowhere near the number of raw resources that I ended up mining. It seems many players on Cyrene are jack of all trades by necessity since people are tired of losing out on auction listing fees and a week of nothing selling.

I also attempted a few different market tactics. While these tactics would have a higher cost overall due to incurring more listing fees I wanted to see if that was an option. In many cases, the auction fees increased to such a degree comparable to the amount of markup I was going to make off such a small listing that it was not worth the risk if they did not sell within a week of being listed.

The great thing is Cyrene has slowly over time been working on increasing the value of the resources that can only be found on their planet. Perhaps in a year or so there will be such a decent enough demand from usage and increased player base playing on Cyrene that there will be a much better turnover rate on their ores and enmatters.

I also have to wonder how many large miners are sitting on massive stockpiles waiting for that day they can start offloading. It is a shame shop costs too much and there are so few on Cyrene. It almost is worth it to just leave a stockpile up for sale and save on endless relisting fees while waiting out the market and development cycles if I was a bigger miner and had access to having a shop.

My mining here was not even close to my glory days of mining high markup ore on a different planet so many years ago. That opportunity itself is also not as great as it used to be as everyone became aware of where to mine and demand decreased while supply increased.

Perhaps my current results from Cyrene would beat out the results I could get by going back to the planet I spent a lot of time mining on. While I don’t plan to test that theory any time soon it might have to be something I do at some point.

It was great to see the results I got on Cyrene smashing how my mining runs on Calypso were going for me. To the point despite having the pay extra costs with extra risks of transporting and Cyrene materials being slow to move that it was worth it in the end.