Planet Rocktropia is almost as big of a legend as the player behind it. It is heavily influenced by music and movies. With the planet having things from movies such as The Thing and Zombie Kong. Along with an area called Lemmy’s Castle guarded by Motorhead creatures. There is a lot to look around at.

Rocktropia was created by Jon Neverdie Jacobs the biggest play to earn gamer in the history of gaming before blockchain and NFTs came along. I’ll be going over a little bit of his history while exploring his planet. He puts just about every p2e gamer these days to utter shame and did it without needing NFTs or blockchain. He was worth millions.

Neverdie ended up joining during the beta period of Entropia Universe. Many of the legends from back then who made a lot of money off the game are long gone. He went from starting the game in 2001 to purchasing an asteroid to turn it into a nightclub for $100k in 2005 by taking out a load against his house.

During that time he would host many virtual events. From things like weddings to a massive event called MMO World Champion League with some rather large prizes. Along with a lot of live parties at the nightclub. He ended up becoming such a famous gamer from setting world records to being featured in magazines.

By 2010 Neverdie ended up selling that asteroid for around $635k. That asteroid is of course F.O.M.A which I’ve done some amp mining a little while back on. It is comprised of a bunch of different domes that players mostly go mining in along with some hunting. That was only the start. During that same year, he ended up launching Rocktropia which I get the pleasure of exploring around. While some players do end up becoming land area owners on a planet or owners of other forms of real estate. It is quite rare for a long-term player to become an owner of a planet in the Entropia Universe.

When you land on the planet it is right next to the massive nightclub that he put on the planet. As seen in the cover image for this post. It’s quite a hopping area as different songs are played as you wander around the area. 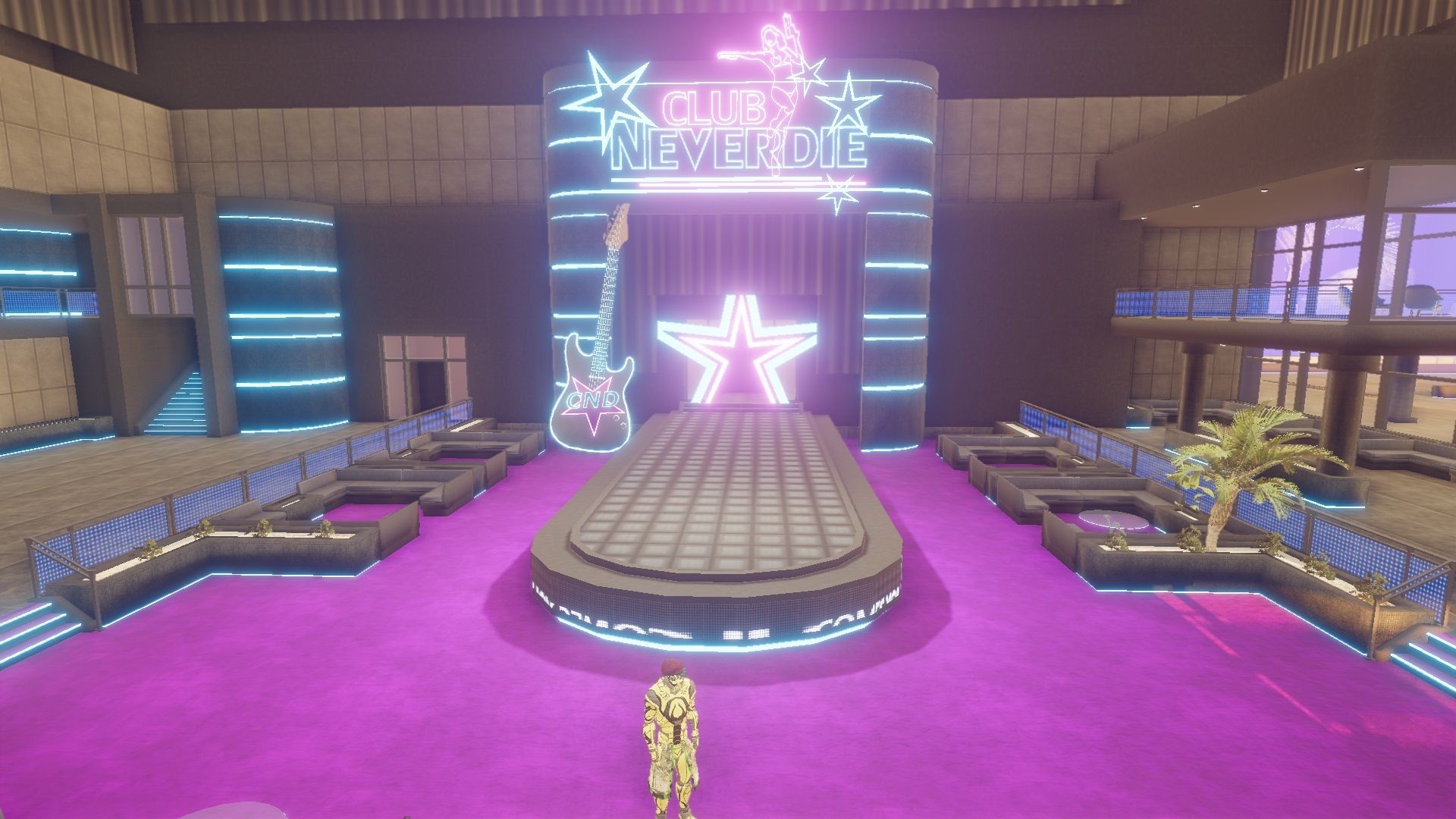 Naturally, I took a few moments to explore the club. The bouncer allowed me in without any issues like I’m a regular here or something. While it was rather empty these days there are still quite a lot of players in the local areas around the club grinding away or hanging out. 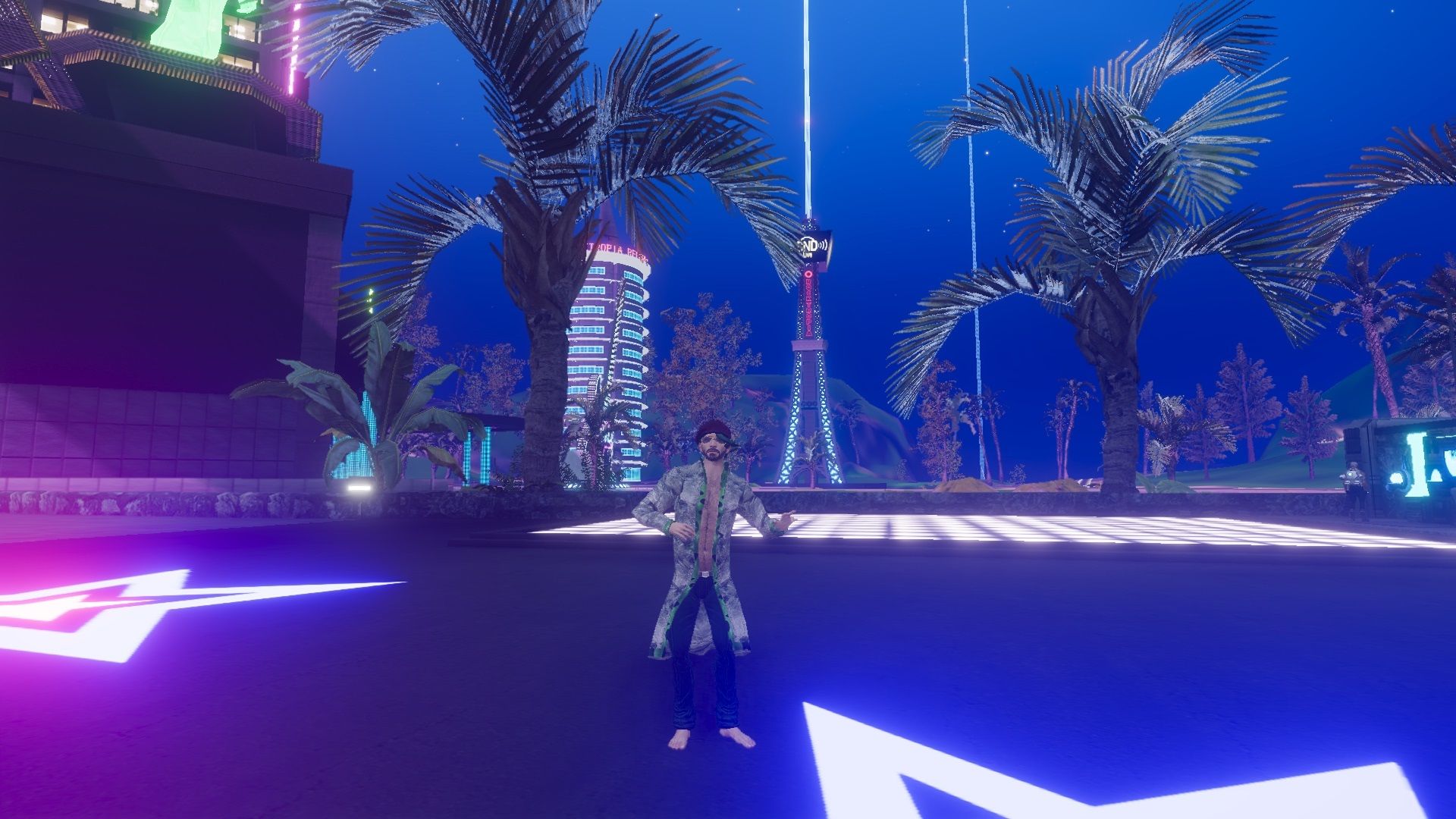 Not that far away from the club is the biggest social spot on the entire planet CND Lagoon. It hosts quite a large floor for dancing and tends to be where people hang out. As it has an auction house, crafting station, and a few other needed stations such as storage.

While I don’t quite have the rocker looks down. My character did his best to jam out to whatever song was being blasted in-game at the time. 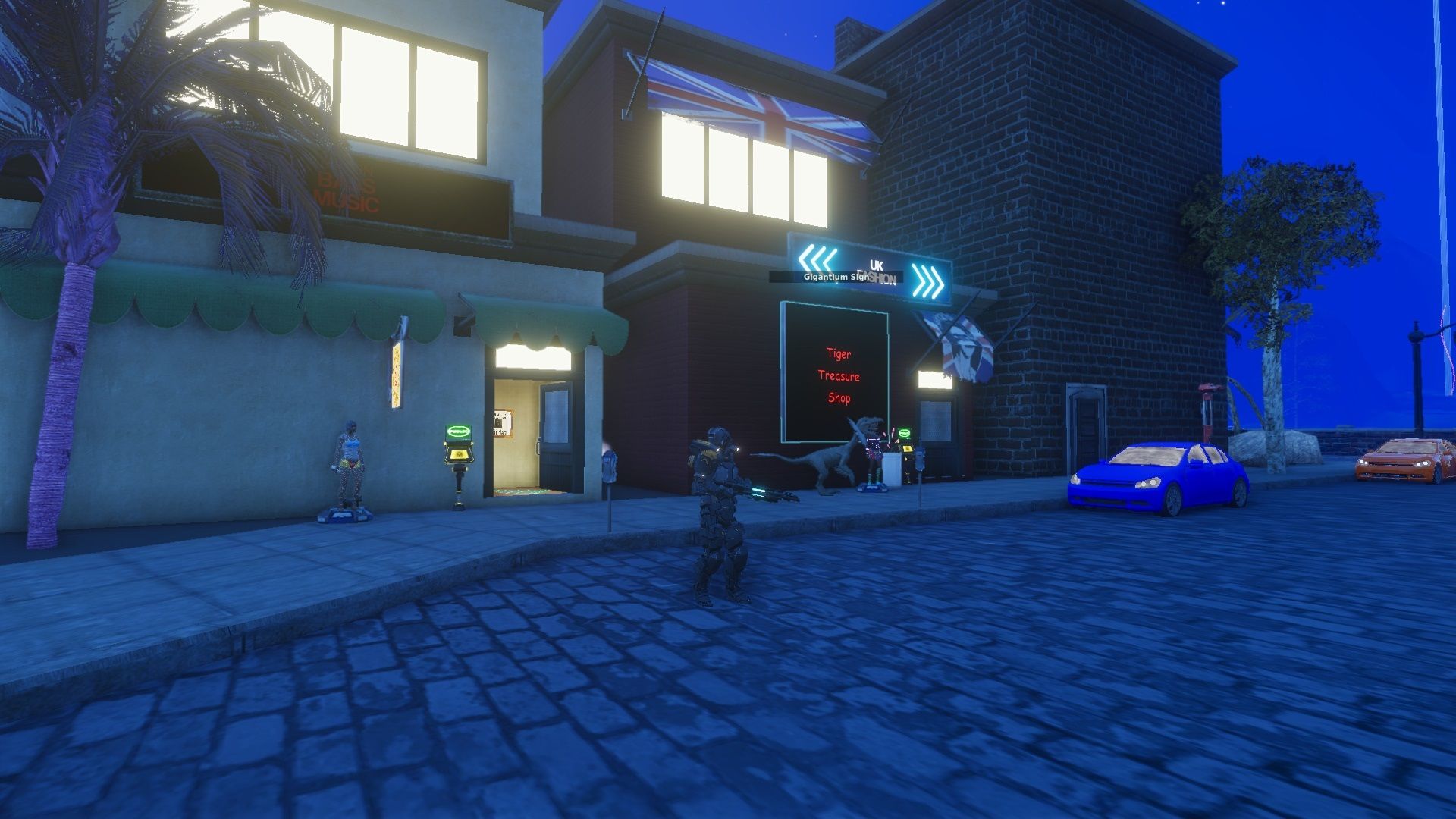 While there are a couple of player-owned shops scattered around the planet and underground such as Hell Stalls. The biggest place to do your shopping is in Tangerine.

There are quite a few large buildings that players have bought for setting up shops in. Some of the shop owners also have their own instances that you can buy a key from them to enter and do some hunting in. Unlike the shopping area, you find in Calypso in this game. The inside of these buildings depending on the layout are quite huge. Some of them are single floors with a bar in the middle. While others have two stories that most players have turned the top area into a living area of sorts if they did not need more selling space. 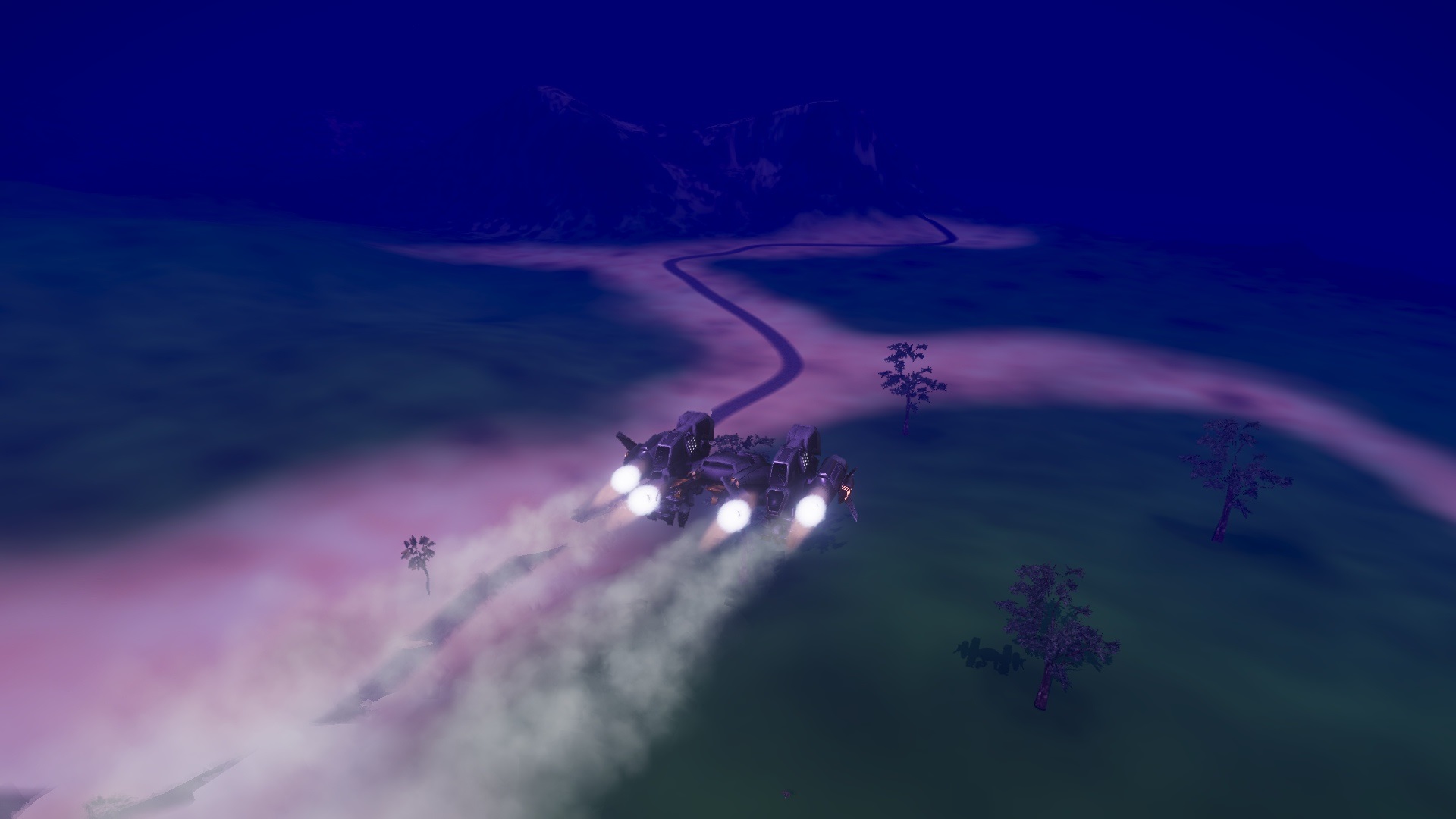 Back in the day, I use to spend a lot of time on Rocktropia mining in some amazing areas for an ore called Alternative Rock. It use to have quite the markup of something like 140%. While nowadays it’s not that high and more like the 110% range. it’s still decent as there is high demand for it in as the refined ingot is used in things like D-Class mining amps. The very ones I use in many of my recent mining adventures.

Touching down on this massively open area that has very few creatures in it makes me want to go mining right now. I am still waiting for a lot of ores to sell so I don’t quite have the budget to do a massive mining run.

Perhaps in the future, I’ll come back with some D-Class amps and try to do some Alternative Rock mining for the sake of the old days. While it would then be cool to then craft my own amps from it. Crafting was nothing I ever got huge into in Entropia Universe. I lack the skills and blueprints to get that far along. What trip would not be complete without visiting Motorhead Stadium? You will notice this planet has quite a few areas named after certain bands, movies, or individuals. When you dig deeper into them you soon realize that yes it is that band, movie, or singer when it comes to these areas. Many of them would even have some involvement with the collaboration directly. 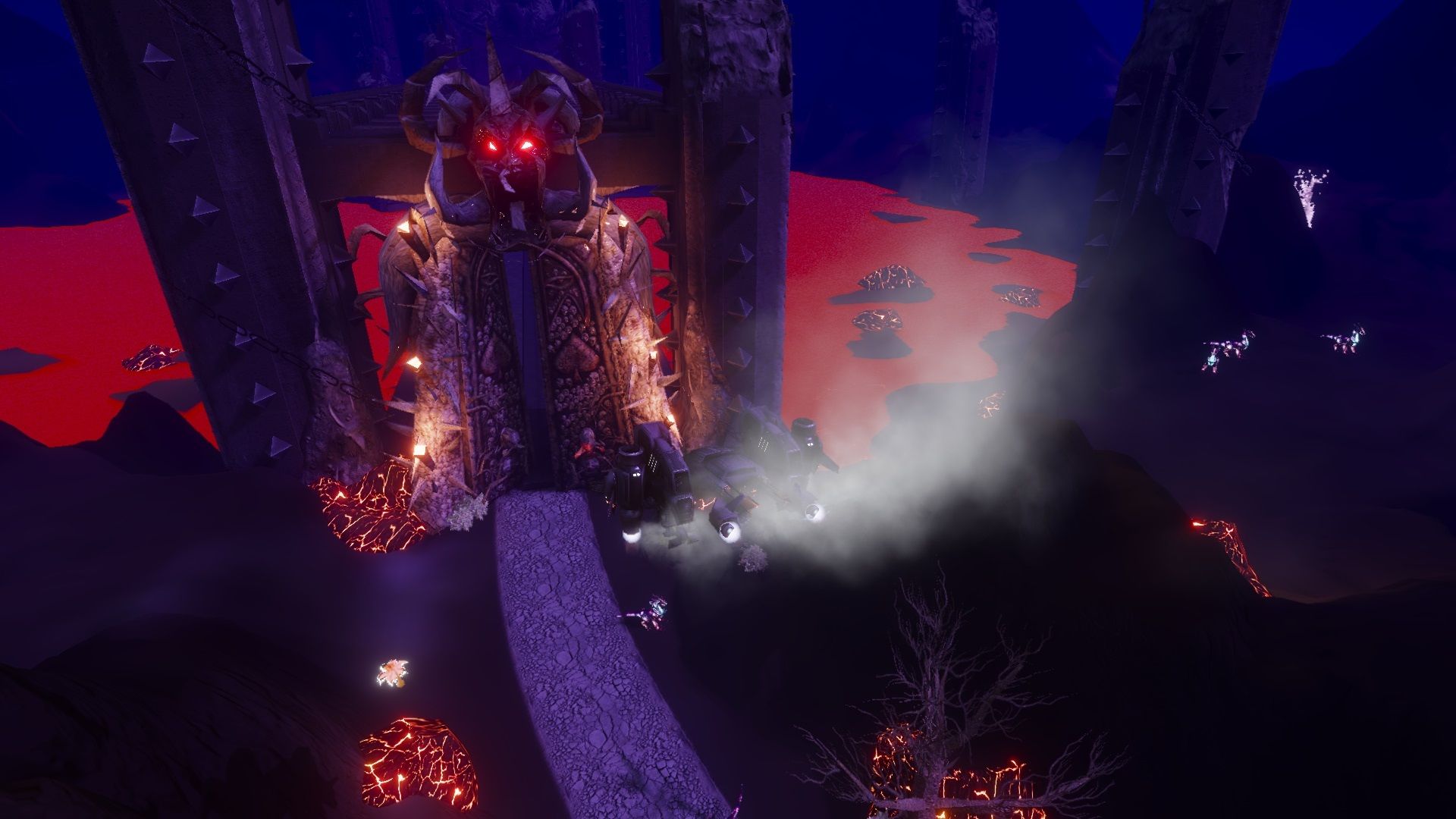 Speaking of which there is an entire land area on Rocktropia called Lemmy’s Castles. I for the life of me after flying around for a while could not find the main castle. I thought it was going to be passed that gate but that is not what I recalled it looking like.

There were, of course, a lot of castle-like areas, and the entire area is guarded by Motorhead creatures. I’ve hunted the creatures a few times in the past. If I’m not mistaken like a few creatures on Rocktropia there was an item that took years before the first one finally dropped. Who knows what undiscovered goodies could still be hiding in their loot pool. The planet even has a movie theater. While you can’t go watch the movie The Thing inside you can teleport into an ice wonderland area that is based on my understanding of the more recent 2011 version.

It is also the place where you can pick up a bunch of starting noob items. I’ve done that a long time ago since I’ve spent a lot of time on this planet. So that won’t be something I’ll be going over in great detail.

That same place is where a society I was in for a while our leader ended up hunting Thing creatures for an event. He ended up winning a massive spaceship that you could crew and started an in-game business warping around people on it. Along with other services a ship of that size could offer. This planet also hosts a massive jail called No Way Out Maximum Security Prison. It used to be the place to go for skilling from the way missions were set up inside. It was also a place you needed to progress along. I did not bring my inmate card with me this time to explore around inside.

This is also not a place you can just come and go freely unless things have changed. At least back in the day if you “escaped” from jail you would have to complete a penalty mission before you could start working on missions again.

Due to that back in the day players would load up on as many items they could carry into that place. They then would sit there for months grinding out the missions using different weapons and doing different things.

I’m still not sure if those missions are still active and a thing. I recall at one point a bunch of players going in there for one massive last month of grinding as quite a few changes were coming to the game. Some of those changes still have not made it to Rocktropia years later which makes many no longer come here for skilling.

You could say I spent a hard time there. I never had the budget to go insane on grinding that place out like many. It was however something I did while I was here mostly for the mining on Rocktropia. There are quite a few little islands throughout this planet. They can sometimes be filled with a certain creature if my memories are correct. Since I was quickly exploring the area to recall where some things are I did not stop down at every location to look around more closely. 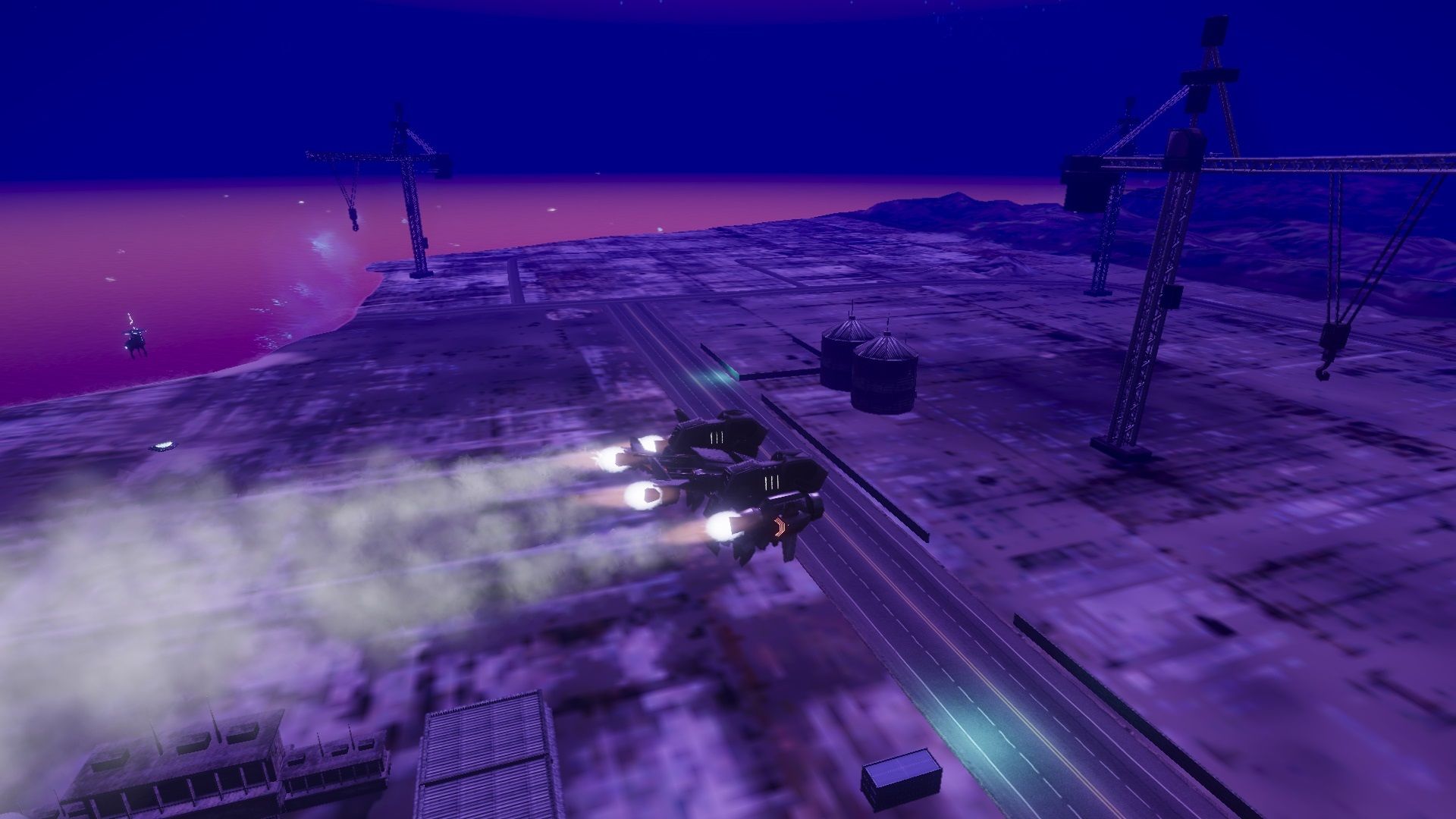 There are some areas of this planet I’ll admit I just don’t know anything about. There is one area called Docklands. No idea if this is some reference to a movie, song, or what. It would be kind of odd for it to be here without having some kind of relation to something like that. 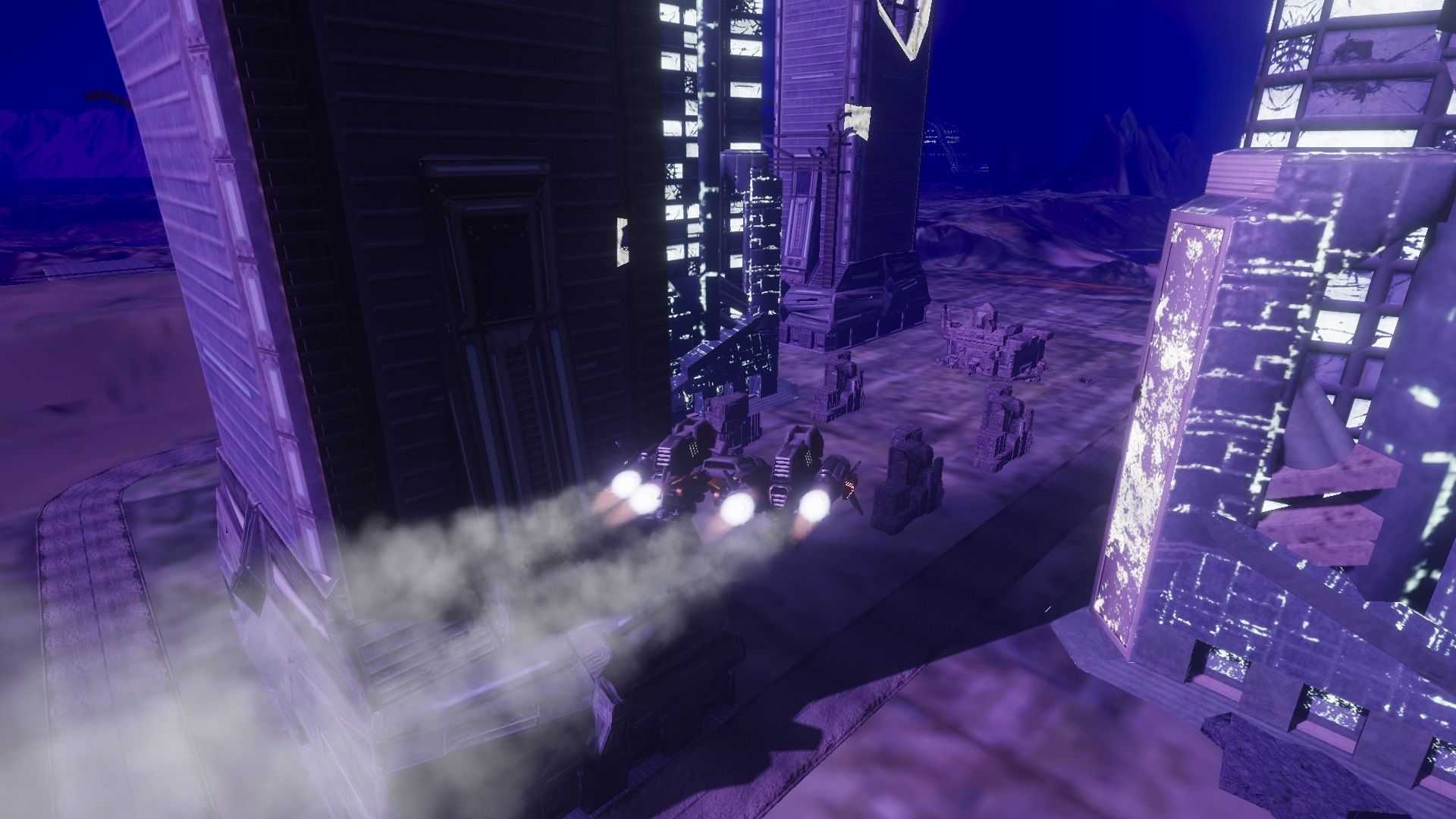 Another huge thing to hunt on Rocktropia is zombies. As they are in quite a few movies that this planet will sometimes have some kind of reference to. This massive area that has been destroyed is called Zomhatton. With giant hordes of zombies lurking below. 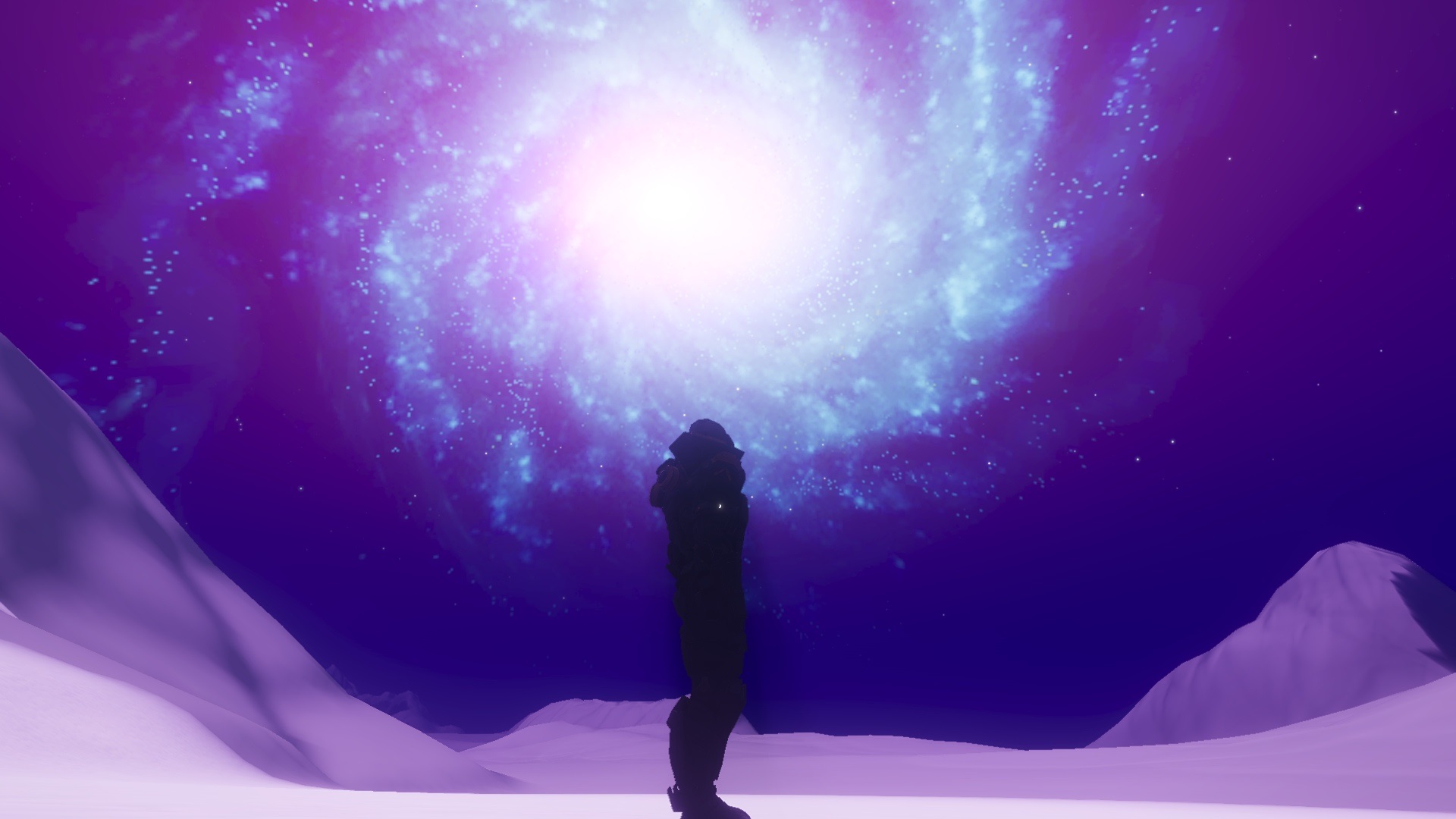 I finished my exploration trip by going as far north as I could hitting the snow. The only snow area I have spent a lot of time on for this planet was in The Thing. The view here is at least great and I did not see any creatures. So I afked at this spot for a bit. 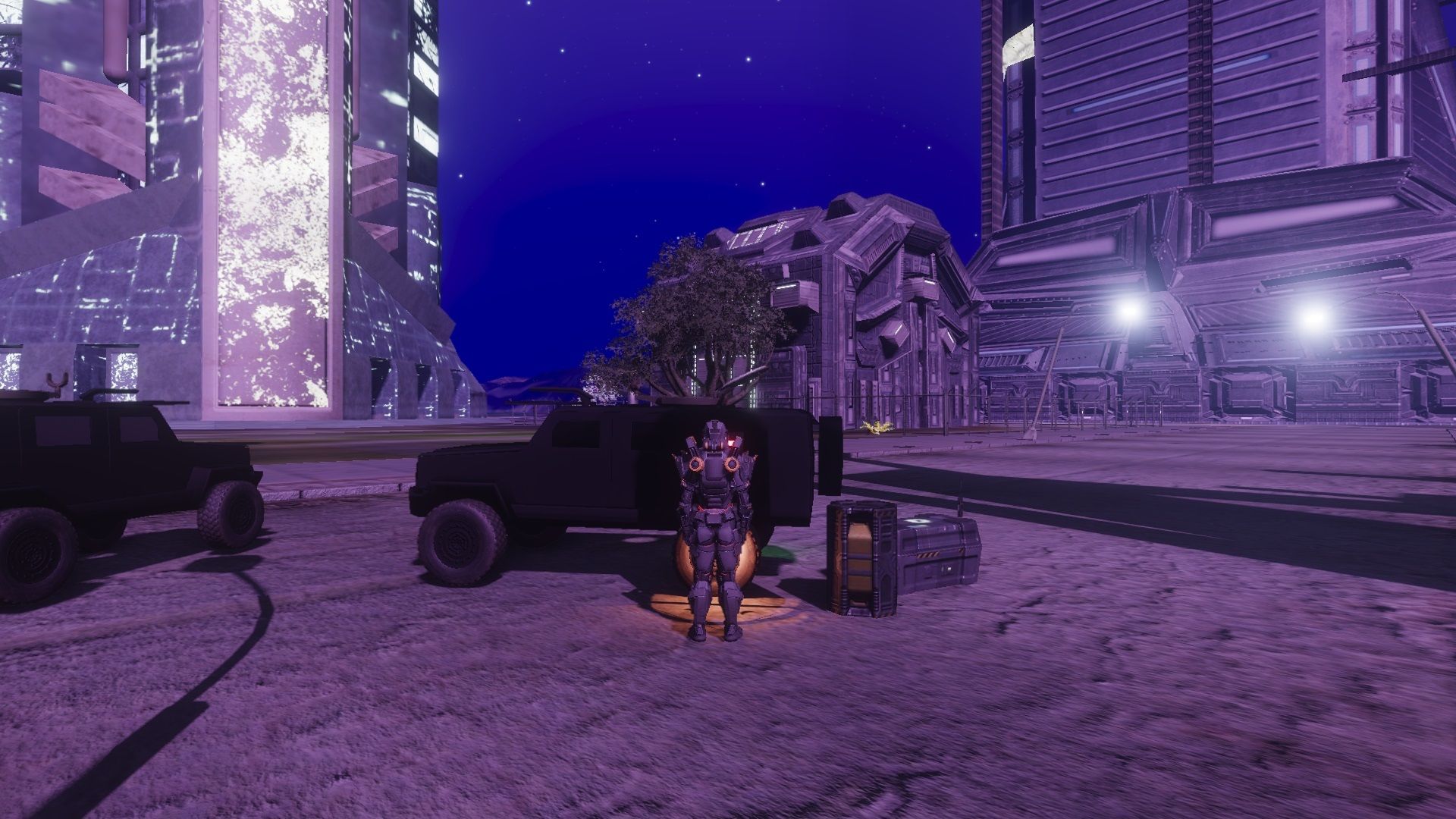 While planet Rocktropia holds a special place in my heart from back in the day. I’m uncertain how much content I’ll be making about this planet. There are a couple of main reasons for that.

First, they have lacked as far as I can tell any big development over the past couple of years other than maintaining things like updating to the new loot system. Second, I’ve already spent a lot of time here in the past so a lot of things like starting missions I’ve already done. Third, of what is left for me to do I mostly lack the gear or means to do so.

I do have a couple of ideas for some stuff I’ll be doing on Rocktropia like showing off some of the lower-level instances. I also do want to go off and do a proper exploration and showcase of Hell and The Thing. If I’m not mistaken there are also other custom areas added since I’ve been away from here for quite a few years now. They have promoted a few movies and other things over the years.