Monria is a player-owned moon in Entropia Universe that I took a trip to. It was inspired by some H.P Lovecraft lore. There are several reasons someone might want to spend a day here or even weeks. I mostly wanted to explore it and see what it all had to offer. I loaded up with a couple of fresh guns and headed out to space. To be able to get to Monria you need to head to its space station. Between Calypso and Rocktopia on the outer edge of the map, you will see a strange reddish moon that has a space station next to it. Once you are on the space station you can take the teleporter down for free.

On my way there I was shocked almost midway that I got shot down by a pirate. I was not aware there would even be enough space traffic to Monria that would warrant a pirate sitting in the middle of space. I can only guess they were hoping on that thinking someone might try and carry lootable items. Naturally, I was empty and they got nothing. I am shocked because there are some free flights to get dropped on the Monria station which makes it easy to get there. The schedules are sometimes advertised in-game, have posters on the planet, and are listed on Monria’s forums as well. They have quite the traveling flight to many different planets and moons. You just need to sign up to get on the guest list on the forum. One of the first places you will want to go is to the Monria Hub Teleporter. They have a nice little welcome area with some missions to pick up. There are also a couple of shops. Along with some NPCs so you can access things like the trading terminal, storage, and the auction house.

One of the reasons I came to Monria was to unlock the daily crafting mission that rewards .75 PED of engineering skills. While I rarely craft, that at some point might change, so, I thought it would be a good idea to have that unlocked. Before you get that daily you need to do some basic missions that Tobie gives you. Those missions include discovering a “Monria” blueprint along with crafting “Monria” items. Since Calypso and Monria share the same server that means not only can you craft on Calypso to get the credit you can use their blueprints as well.

For the bulk of the crafting I would need to do I brought along a Basic Filters Blueprint which counts as being a “Monria” blueprint. This is an easy-to-get blueprint from a vendor and it only requires 1 Lysterium Ingot and 1 Oil per crafting attempt. Before I could work further on the mission chain I would need to go out and mine.

I did try mining in quite a few of the domes on Monria. The only place I had any luck with my F-105 was in the DSEC Forensics Dome. Since it is indoor mining it’s a bit like mining on say F.O.M.A. In terms of having a reduced search radius making it harder to find a claim. To make up for it you do get much bigger claim sizes. For a while, I was double-dropping for both ore and enmatter. While I was finding a bunch of Lysterium Stone size 9 I was not having any luck on the enmatter front for oil. After a while, I dropped searching for enmatter entirely.

Thankfully I did not need to find oil. I had quite a large amount sitting safely in my Quad-Wing fuel tank. Which keeps it from getting looted in space. So I just pulled some out of there for my crafting needs. I guess this makes me an oil smuggler!

While Monria has some exclusive mining finds such as Maladrite and Zoldenite. Along with some mission chains for earning skill rewards for finding enough deposits of them. I never once found any of them.

I mostly found Lysterium and with it being indoor mining I did not want to risk a lot. All in all, I only dropped about 100 PED worth of probes. I did end up being down a little bit. I at least found some of what I needed. 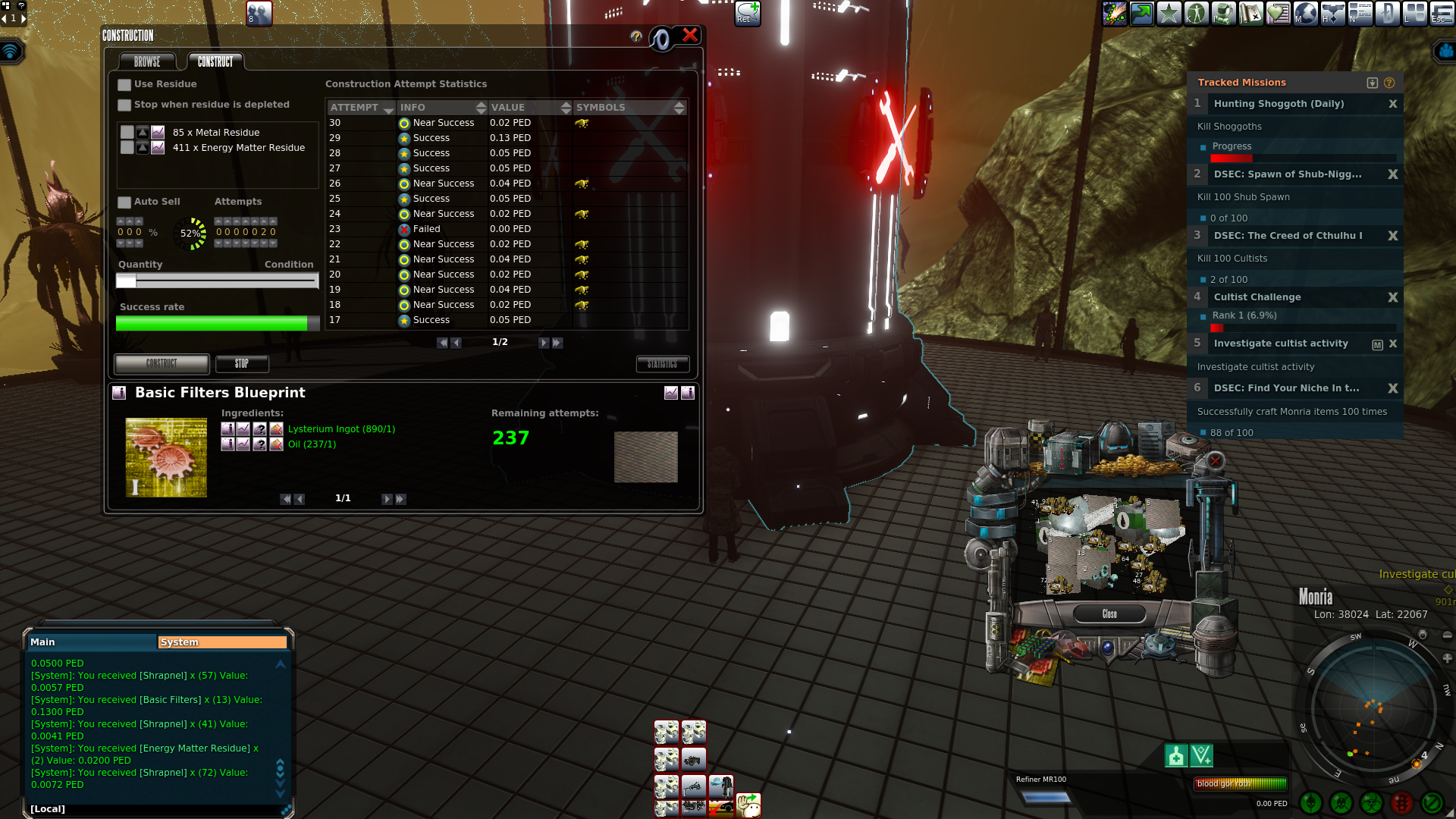 From there I was able to work on the remaining crafting missions to unlock the daily. Like DSEC Find your Niche by crafting 100 “Monria” items. I decided to park myself in front of this massive crafting device they have in the main area on the second floor. I even ended up finding an (L) blueprint and got a 2 PED success. Between those two events happening and some smaller luck> I ended up being slightly up on my crafting session. While I could have attempted crafting the 500 items needed for the daily there. Since I was coming up short on mining oil and it would take a lot more than 500 attempts of Basic Filters to get 500 successes. I left it unfinished. As mentioned before Calypso and Monria share the same server so I can confirm after testing it myself that you get crafting credit for doing so on Calypso.

This however would mean I’d need to fly back to Monria once I was done with the daily to repeat the process. While it’s not exactly worth the costs to try and do the daily mission this way due to space travel costs if I was to fly there alone.

There are those free flights I could use to reduce my costs and just pick up the daily whenever I get around to finishing it. I’m not a huge crafter so I doubt I’ll be crafting up 500 items any time soon. It is however nice to know for my efforts I’ll get a little bit of engineering skill for doing so. My skill is only like 1700 engineering so even that amount is several experience points per turn in. Once I had the daily unlocked I went out mining some more. No shock I found more Lysterium. At least it was something as indoor mining tends to have a lot of no-find search drops. I do need to upgrade my extractor at some point. Mining that much Lysterium can take me a while since I’m only pulling up ~0.370 PED or smaller on a 12+ PED or bigger claim. After unlocking the daily crafting mission I did go out exploring more. Along with putting more focus on the hunting part of this trip.