Entropia Universe has a lot of cool things about it including player-owned shopping areas. Many players over the years have invested quite heavily into the ownership of different things. I took a look around some of the shopping malls and areas. Many appear to be quite dormant for now.

Back in the day, I use to just be able to walk into certain stores in a mall in Entropia Universe and I would know who would have stocked the latest trends in guns, gear, or fashion. If I’m expecting this game to have a massive boom wave again I will be keeping an open eye on Malls to show they are rebuilding with older players returning or finding new shop owners.

The malls and other shopping areas I’ll be checking out are on the planet Calypso. While it is the first planet ever in the game I’m no longer certain if it has the most active player shopping areas. So I thought I would check out a few. Along my journeys, if I end up on other planets in the future I’ll do some browsing around in them well. 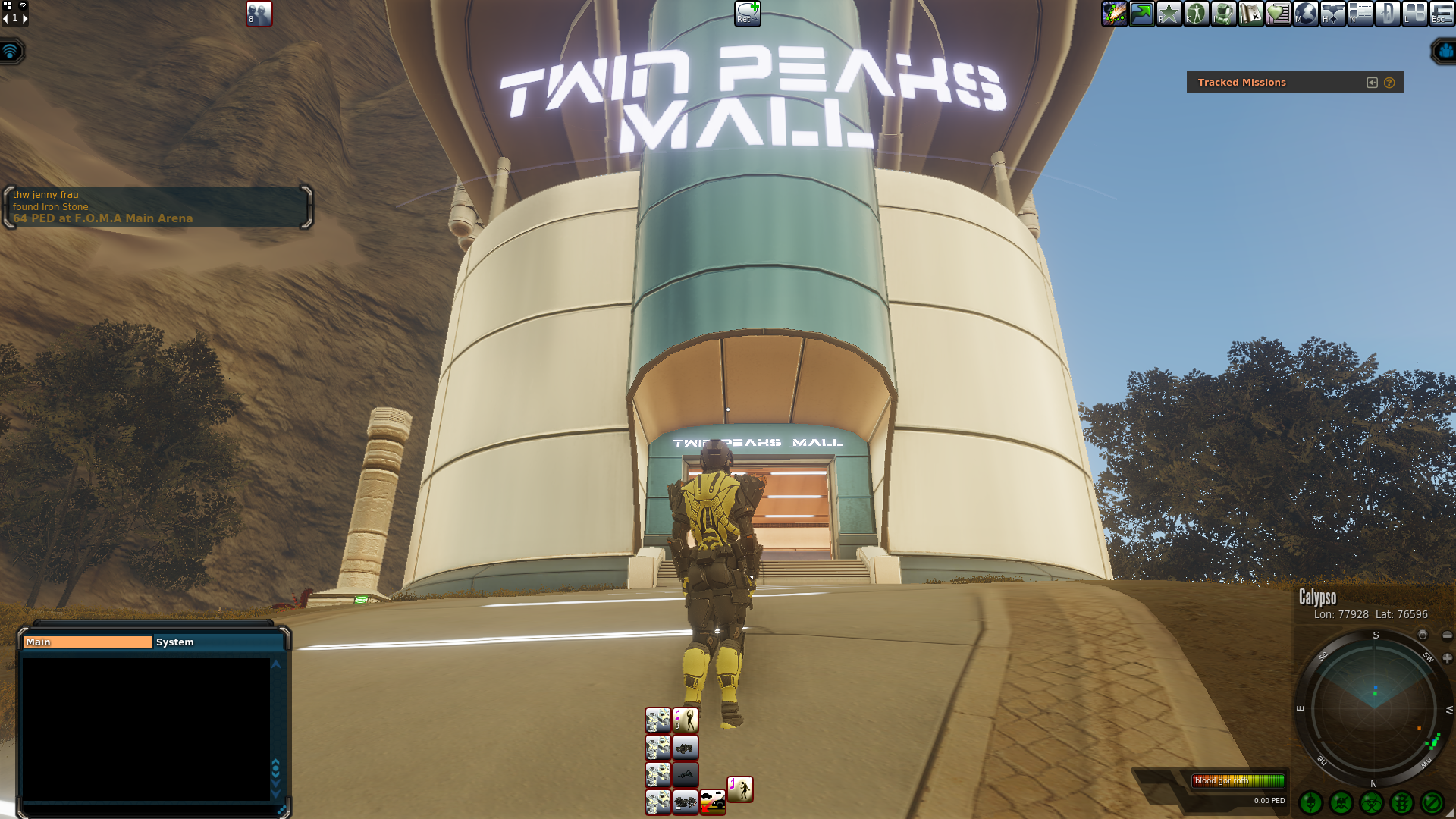 Twin Peaks on Calypso use to be a mega-hub and the place in the universe to hang out. You use to find a lot of players spamming chat with their buying or selling lists. People show off fancy gear, weapons, and vehicles. While you still have a few people around buying up ores and hunting materials it’s a lot less busy.

Just off a side road, you would also find the biggest shopping mall the game has to offer. It was the place of who is who and if you were anybody you bought and stocked up a store with your goods there. While I never had a storefront there I had some friends that did back in the day. Many times people would come back from their exotic adventures on other planets and bring back a treasure trove of goods. Many high-end items would go up for sale on display where they could sit for months or even years. Now days seems many have set up pet stores with creatures from many different planets. 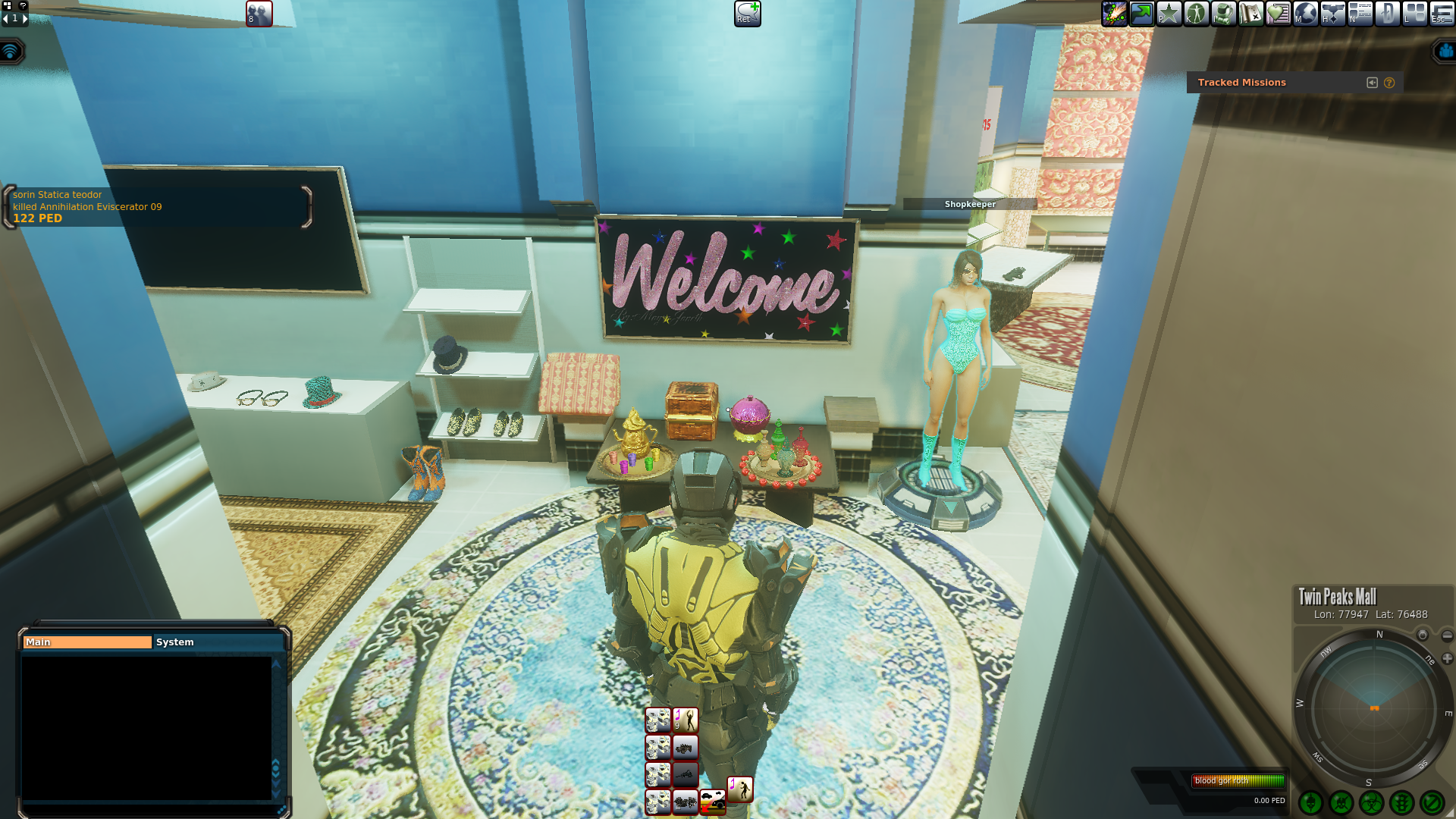 Used to be quite the fashion scene in Entropia Universe. Where players had posted weekly hours that they would be in their shop to do haircuts; and, dye: gear, clothing, and vehicles. That slowly turned into people displaying an email to contact to no one even replying to that email. 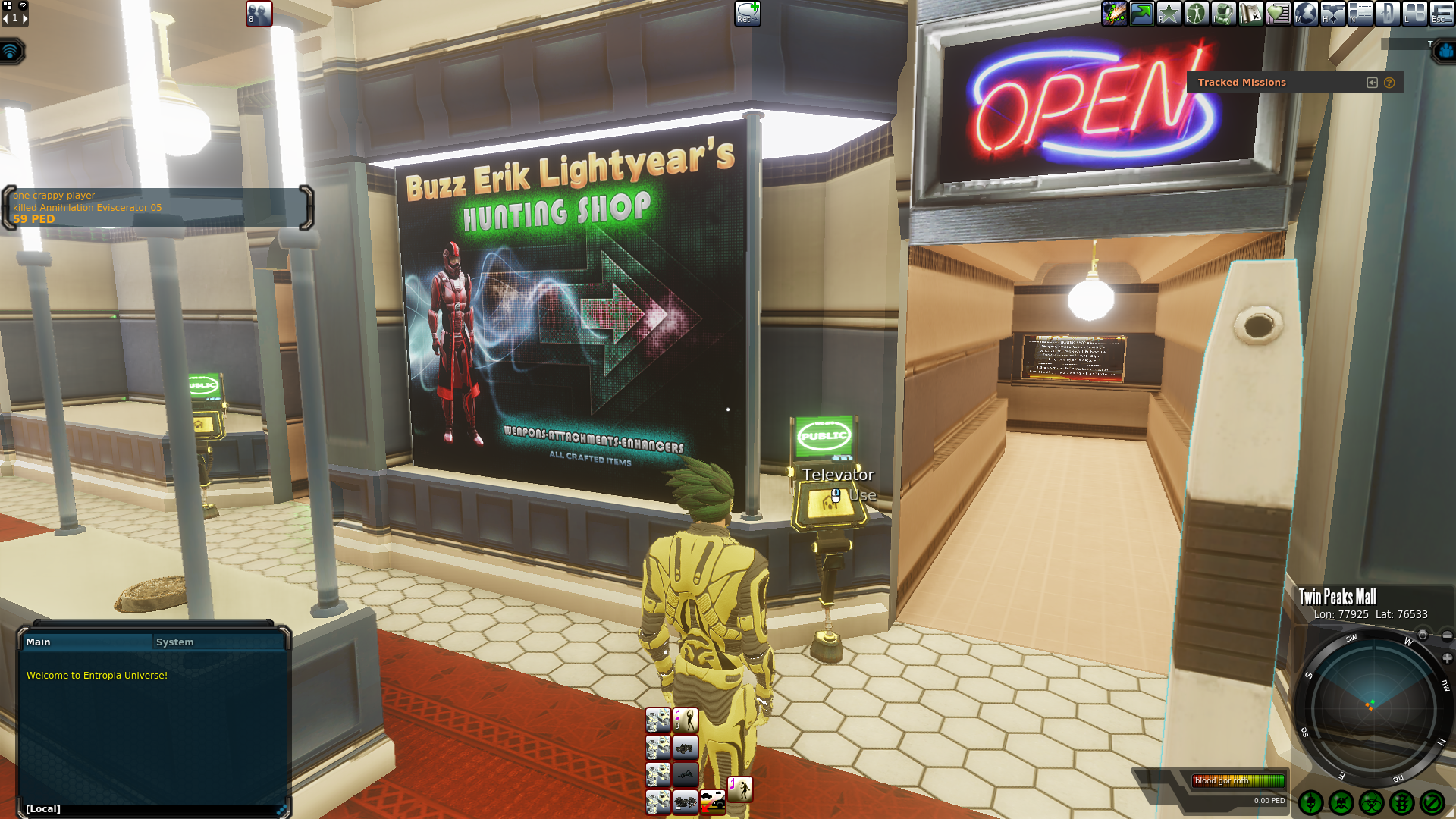 Buzz Erik Lightyear was quite a legendary player and investor in the game. He has quite a few shops themed after different activities such as hunting or mining in the game. If you needed it there was a high chance it was in stock and at a decent markup as well beating out auction house prices. Nowadays his stores are just about empty. The only thing remaining appears to be overpriced items that never sold. I can only assume it’s been quite some time since the shelves have had a proper restocking. I could however be wrong the ongoing Mayhem event could have wiped out inventory. I however doubt it since I found other stores fully stocked with the more popular weapons. 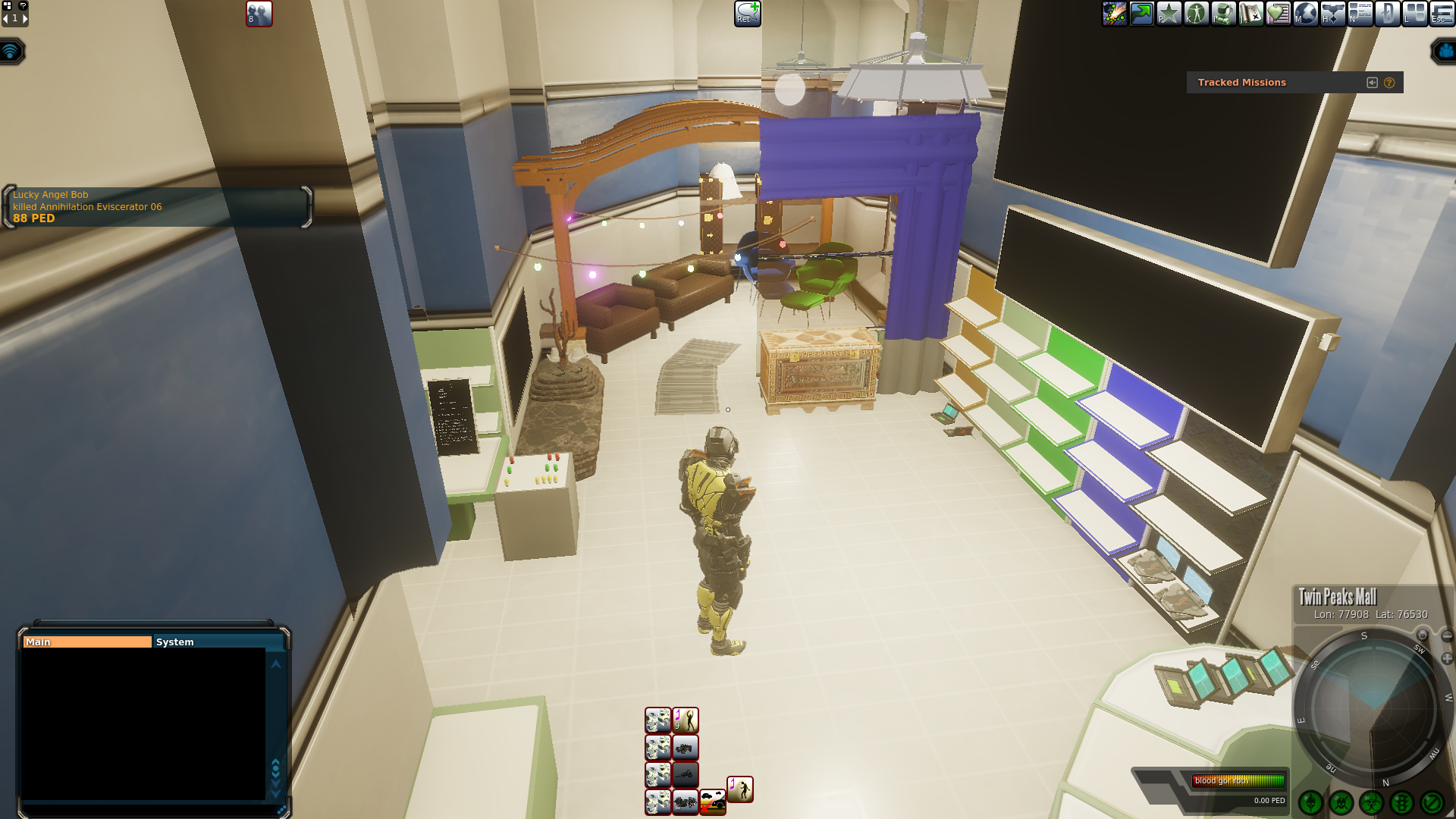 It used to be that exploring the shopping malls like Twin Peaks would cause you to crash a few times. Some stores used to have so many items you would lag trying to load it all. Now a lot of these places have barren shelves.

I am somewhat shocked I did not see any shop deeds up for sale while I was exploring. Perhaps many are just waiting for the game to have a bit of an overhaul before making a comeback. There are however other malls on Calypso some much “newer” as well. 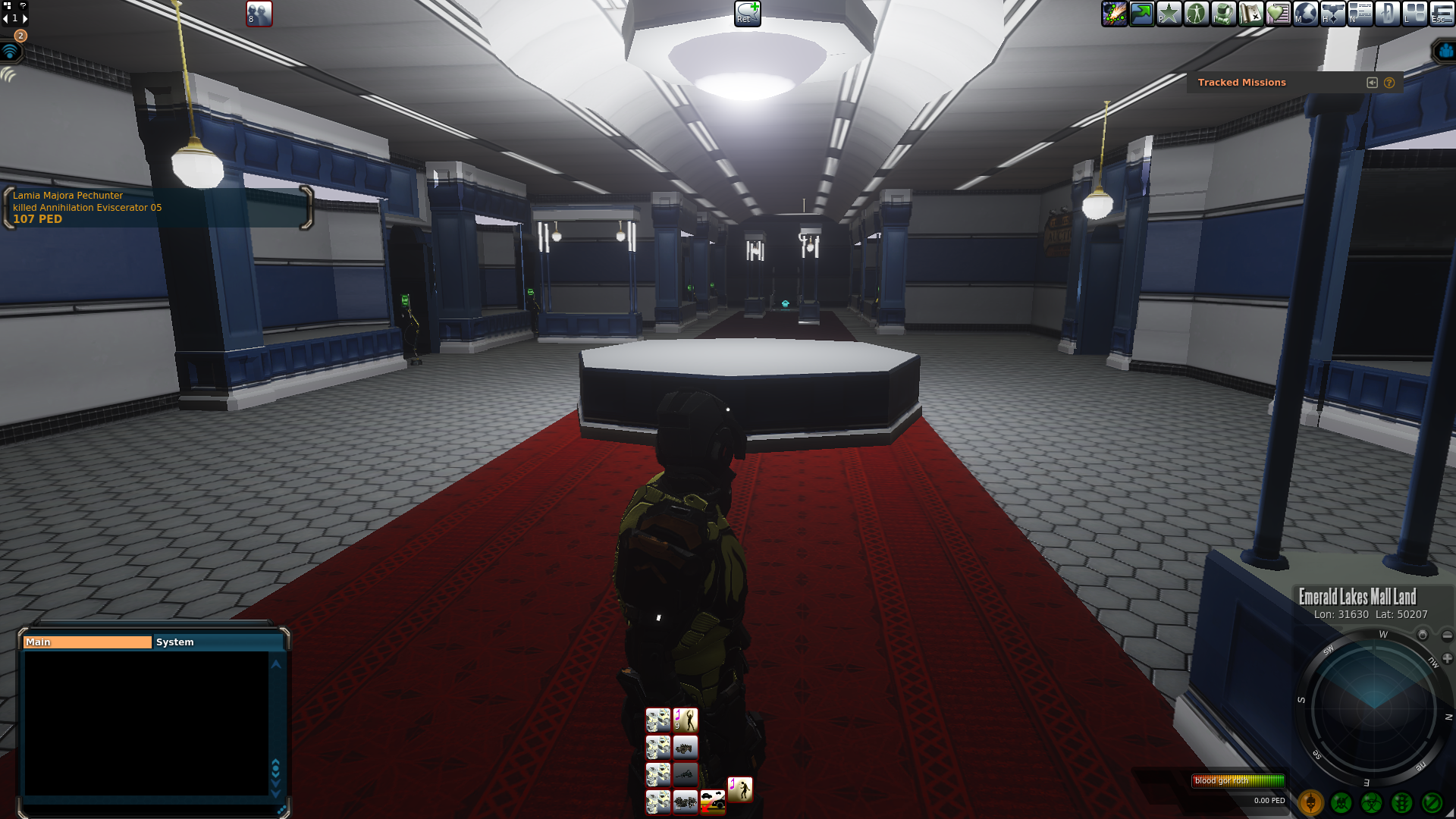 Most of the floors of Emerald Lakes Mall are empty and void of much of anything. I wish I could remember the story of this mall. I want to say the player who owns it ran out of money and the project died.

While there are a couple of “open” stores in the mall. Most of them just have empty shelves. I also really hated how the lighting is in this mall. You would think with how dark the hallway was this shop was closed. 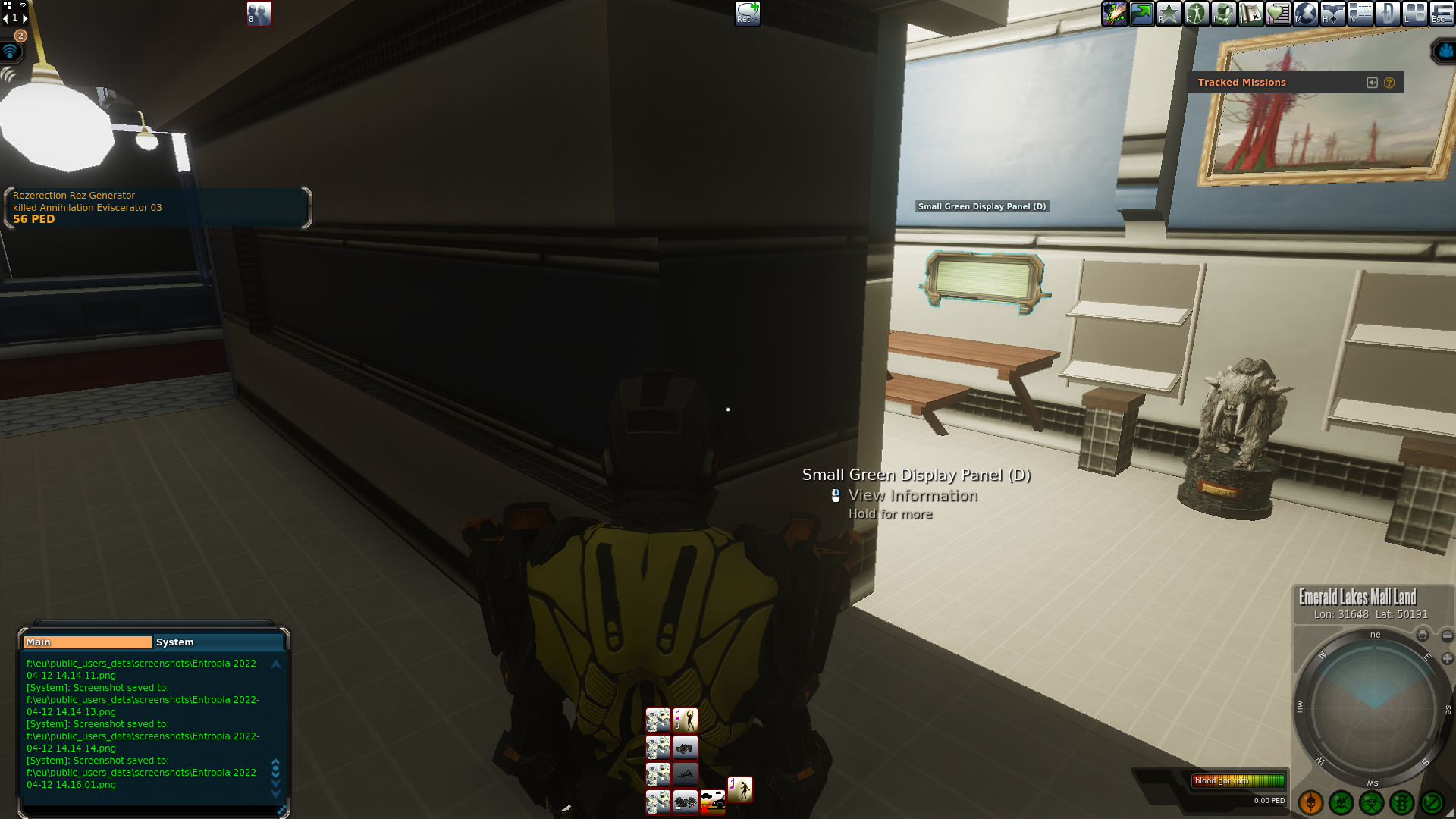 Most also don’t put up any kind of signs that they are open and have items for sale. Making you need to go into each store to see if it even has anything for sale at all. 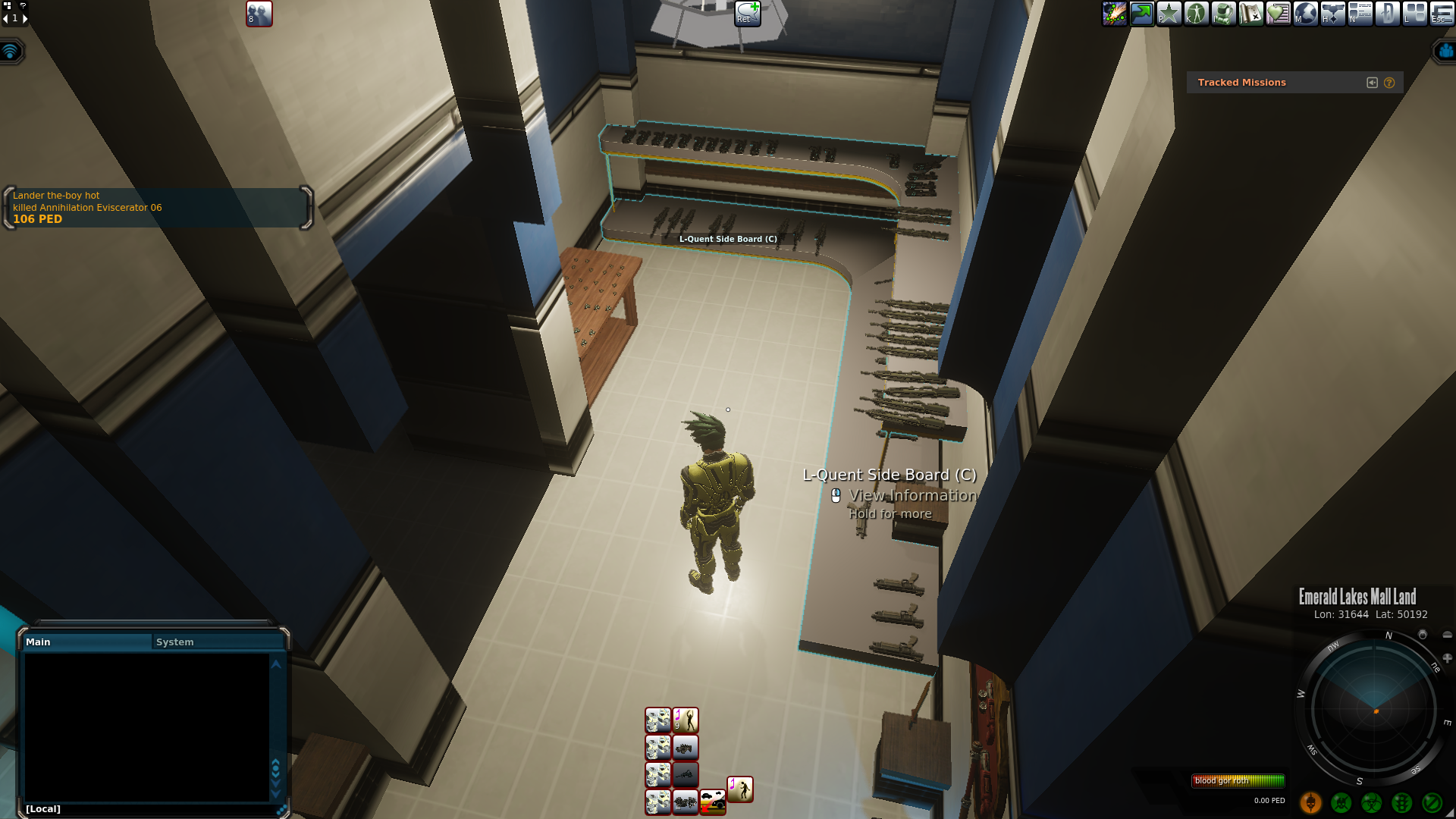 At least I did find a shop on the second floor with some guns that I could use in the future. While I have the recommended skills to use their damage and hits per minute are not yet maxed out. The markup for them was slightly under auction house prices I can only hope this crafter is still active.

I do hope once they do a graphics overhaul for this game they fix the lighting in this mall. If you teleport to the top floors first you would think the entire place was just empty, abandoned, with most of the lights not working. Port Atlantis is quite an important mal. If you land on this planet or choose it to start where you end up being in Port Atlantis. As such people use to stock stores here with a lot of starting items and lower-end stuff. This is not the mall I would be going to expecting to find a 2k PED overcoat.

Some people use to go all out. Whatever the holiday season as they would decorate their shops accordingly. Nowadays Christmas decorations still being up in April is quite a common thing to find. Shops proudly displaying signs stating last restocked in 2020 is also quite normal. 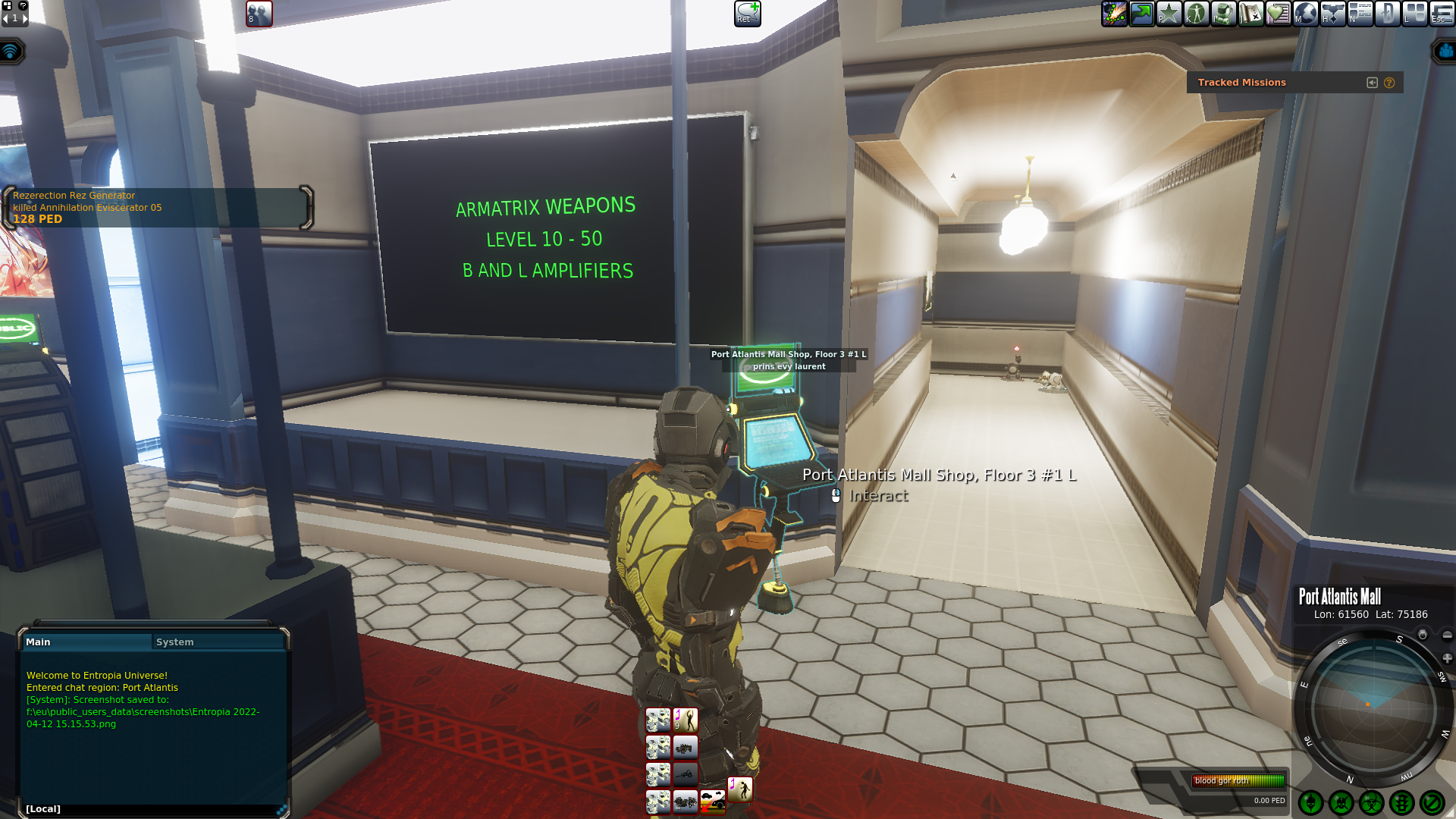 I at least did find a couple of stocked gun stores in this mall. The prices here were even better than I found in the other malls.

I was hoping to find the lower-end full set of gear in this mall. Unless I overlooked it I did not find much other than L sets that I did not care much for. Many have been picked through and had random pieces of uncomplete gear sets laying around if that. 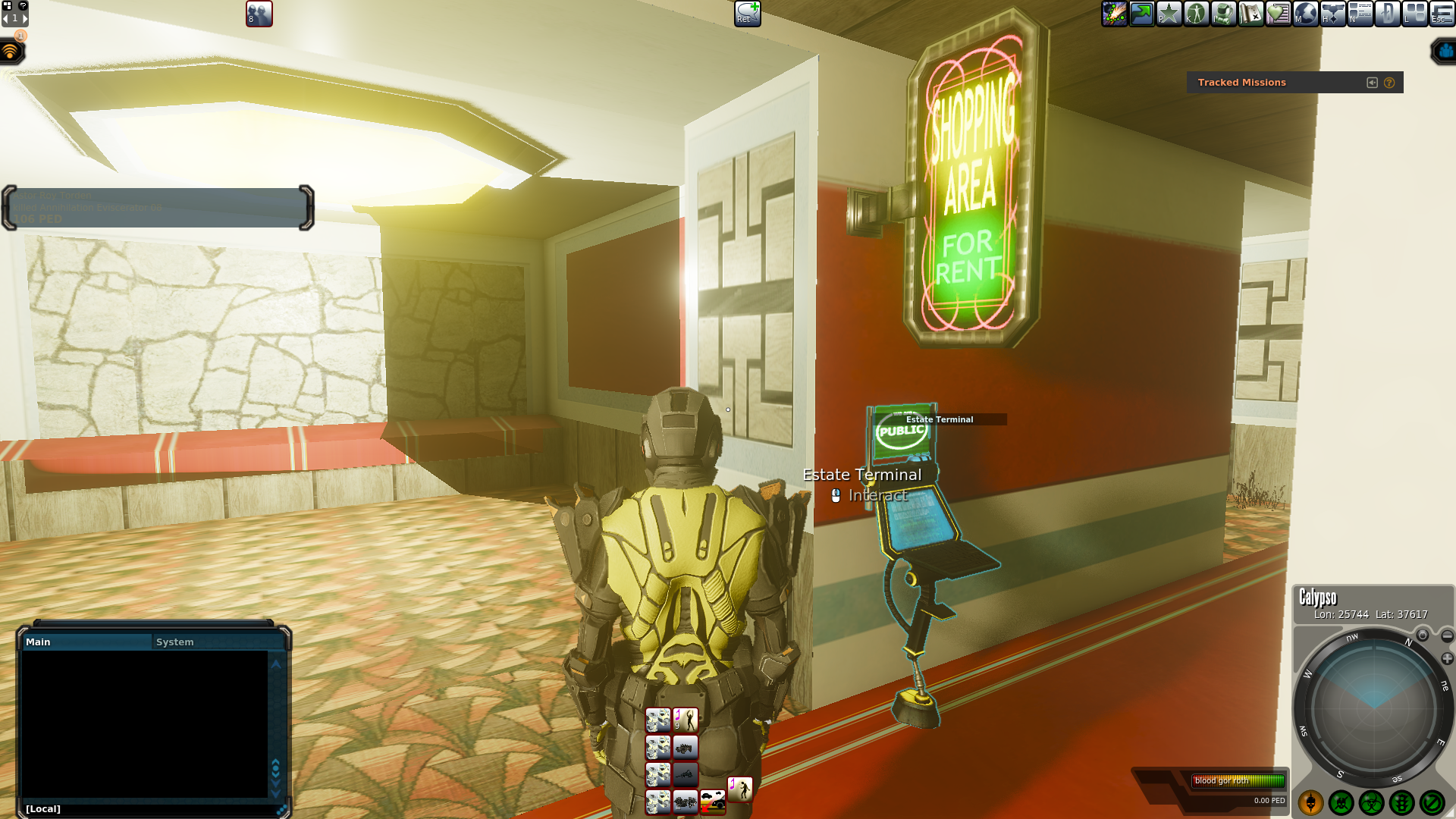 There are lots of other areas players have shops and items for sale. Outside of the malls though it can be a bit hard to find unless someone is paying on advertisement screens in-game that they have an active and decently priced shop.

Most of those places though are even more empty than the malls. This one place has a bunch of apartments on the top floors with a shopping area down below. All the shopping stalls say they are for rent. I think even six years ago they were all empty. I would not expect a lot of foot traffic here.

I am hoping to find some activities and out-of-the-way places. There got to be a good spot being maintained somewhere for me to do a bit of shopping. If not perhaps some of the newer planets have active shops since those players would have bought the deeds for them more recently. While I did find some guns stores to go shopping in the future. I was hoping to find a “cheap” coat to wear over my gear and an armor shop to get an idea of the prices. It seems I’ll still be on the hunt for where to shop.

At least some gear I was bidding on in the auction house has finished with me being the winning bidder. A lot of gear up for sale just not the full set making it a bit hard to try and have some options for hunting and other activities.