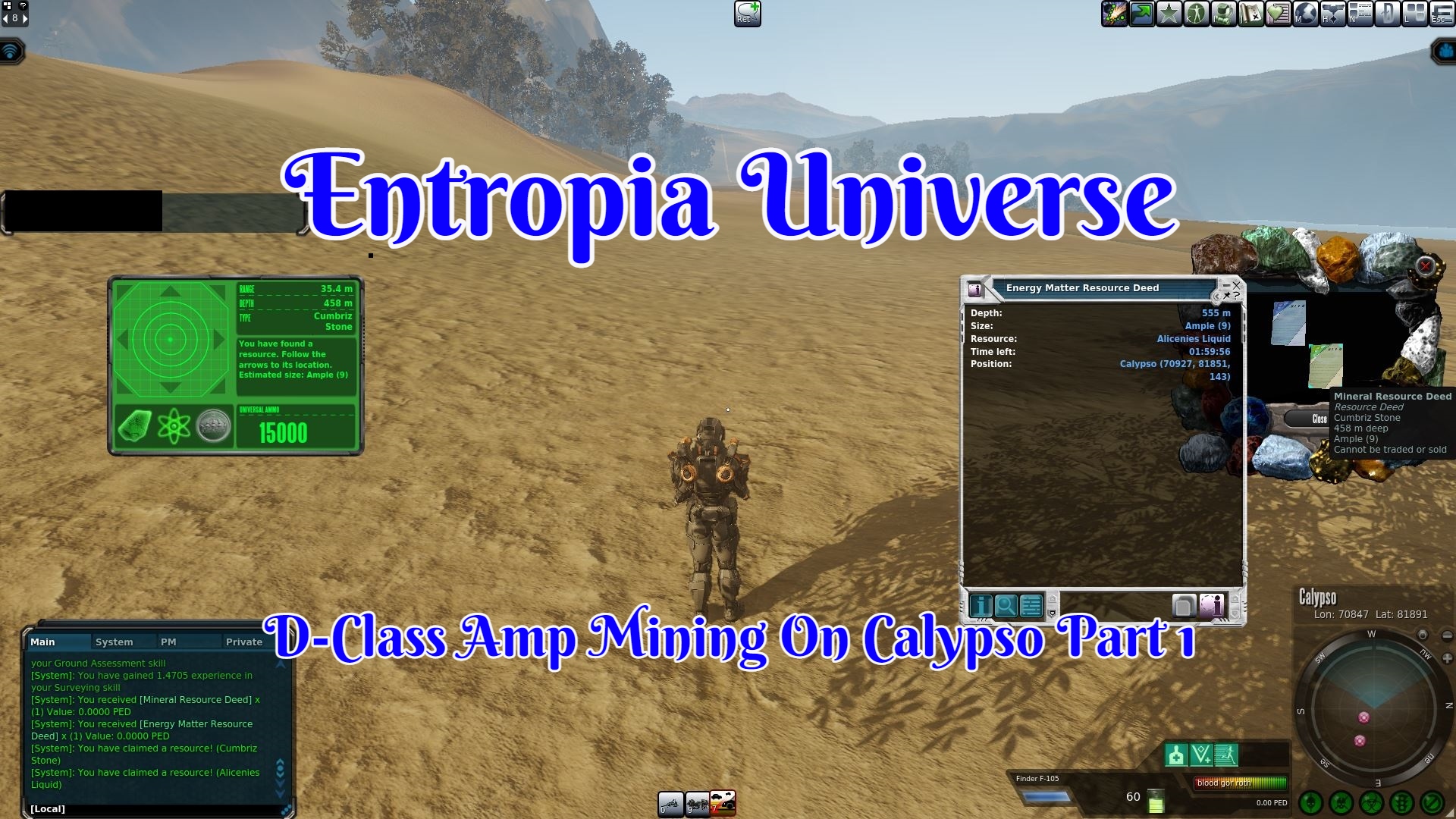 Most of the time when it comes to using amps while mining I have a rather hard stance on not doing so. Amps unless you have one of the few unlimited ones add a markup that you can’t expect to recover while using them. While there are certain situations like target mining high markup ores that make sense for using them among some other situations. I tend to stay away.

I however thought it would be fun to buy 3 D-class mining amplifiers (amps). They have a base value of 160 PED and I paid 8 PED in markup putting them at 105% markup. While you would think 105% markup would not be that hard to overcome over the years a lot of mining resources have dropped a lot in markup.

Many would compare the class 8 finder amp with the D-Class mining amp as similar. They both have 4 PED decay per. Class 8 tends to be at around 107-108% while the D-class is only at 105% at the time of writing this. I checked before buying anything that I was getting the cheaper one.

I also thought it would be fun to go to an area I’d never minded before. I’ll also be double dropping for both ore and enmatter. Under normal mining, ore mining costs 1 PED and enmatter .5 PED in probes. The d-class mining amp will be adding an extra 4 PED to each of them. This is quite the boost for enmatter. Making each search cost 9.5 PED in total.

One of the other reasons I tend to stay away from amp mining is I just have a basic mining extractor. With each drop now expecting to be around 6.3 times larger, it will take some time to mine up everything I find. While there is a lot of time-saving in not having to drop that many more probes. I could end up in a situation where the faster I can mine a claim in a pack of creatures the better it is which won’t be the case with amp mining.

You are also taking the risk of amplifying a bad run or just an average run. This is what you usually get in hopes it won’t be dreadful. If I wanted to do this more properly I would have a better understanding of what I was mining and say have 100 D-class amps I would use in a cycle. 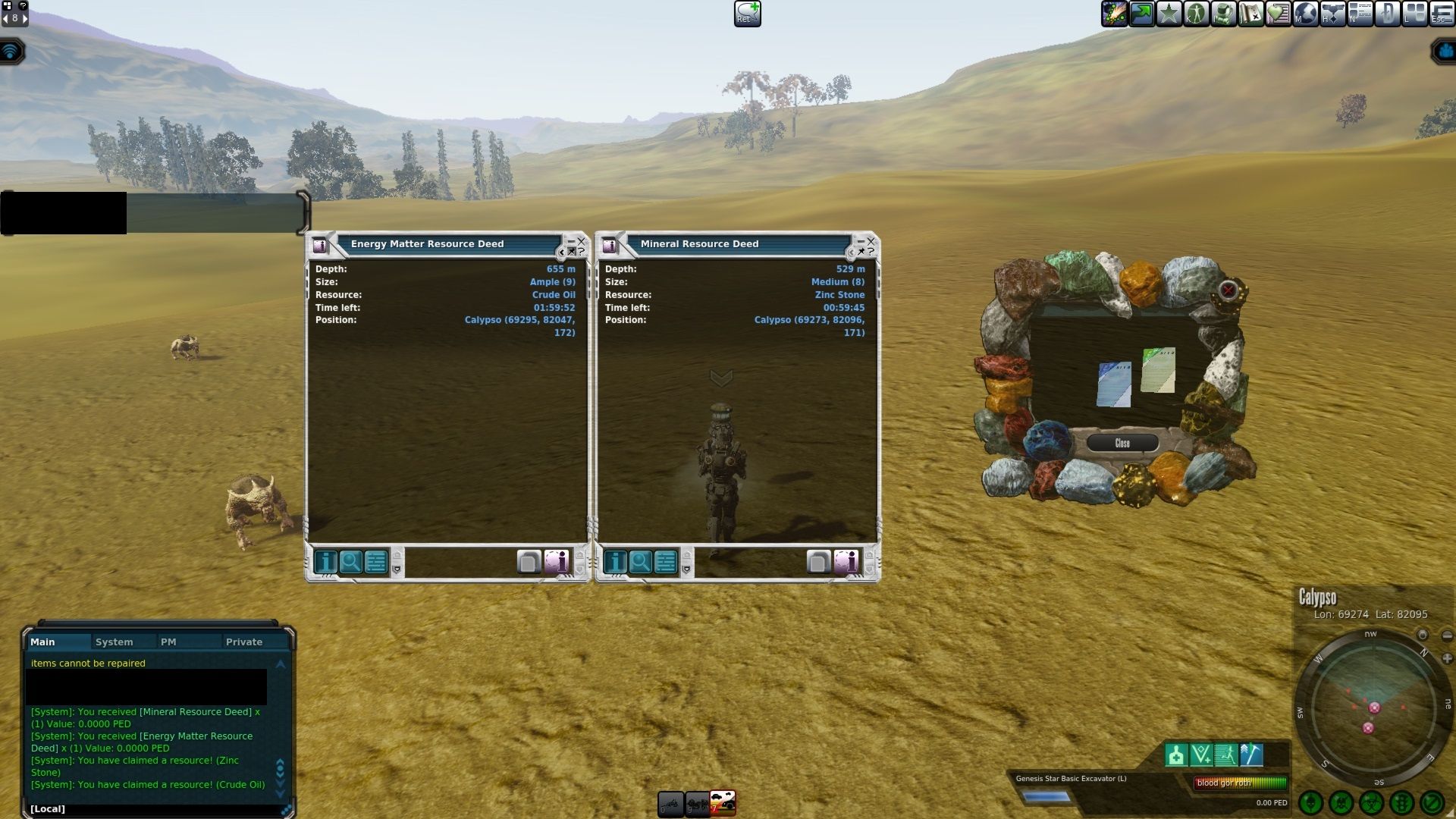 Instead of seeing mostly 4 or 5 sizes for ores and size 3 for enmatter. You tend to see sizes 8 to 9 as normal for either of them. With enmatter sometimes being as low as a size 7 but just barely. You however need at least a global or some insane hit rates in finding claims to just break even or profit. 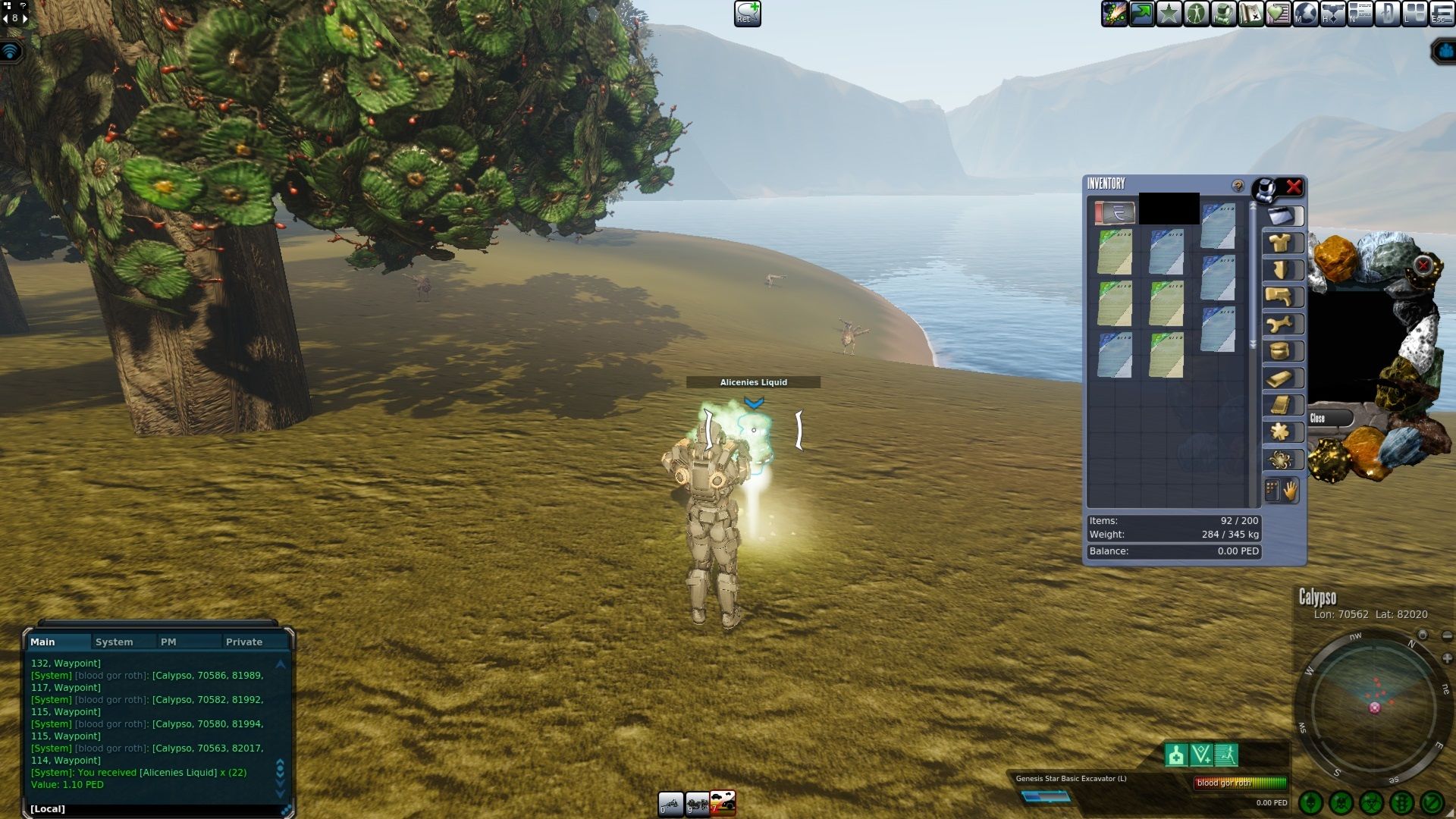 When non-amp mining I would usually drop a probe and if it found something I would run back to extract the resources claim. With amp mining since it takes me a while to mine the claims, I would mine out an area and then head back to the claims.

However, you can’t wait too long either. While these are bigger claims. A size 8 claim only lasts for one hour before it disappears. You don’t want to end up in a situation where it takes you 2 hours to mine up all your claims and the first one expires in half an hour.

The main reason for doing it like this is dealing with the weight of everything you mine. While I do have an ok weight carrying limit before I become encumbered and have my movement speed reduced. Mining this much ore and enmatter regardless is going to be a lot of weight.

There are a couple of ways to try and combat that. Many when they go back to extract their claims will simply fly around and land next to each claim. Since you do very little walking it matters little how slow you can move.

The method I prefer using and I do all the time when I mine is to bring a few vehicles with me. I’ll open up their inventory and place my mining resources in them. Once I maxed out what they can carry I’ll spawn them on the ground and recall them back to my storage. Once you are no longer carrying the vehicle you are free from all that weight.

Many along with that might also bring a couple of refiners with them. They will refine down the ores and enmatters to reduce the weight. However, unless you have a fancy refiner that has a lot of TT you are going to need a few of them which adds further weight to you.

Otherwise once the one you brought with you breaks you are done. There is a solution to that but it tends to come with a high markup price. There is a portal repair unit (L) tool. Which I feel is going a bit overboard if you are using a low TT refiner. I have never owned one and view that more as a hunting in the middle of nowhere type of deal for repairing unlimited armor and damage amps.

While vehicles do tend to weigh a lot. Once you start to spawn and recall them you start gaining back some of that weight. Regardless of a mining run like this, it’s a good idea to unload a bunch of stuff you are carrying that you don’t need. 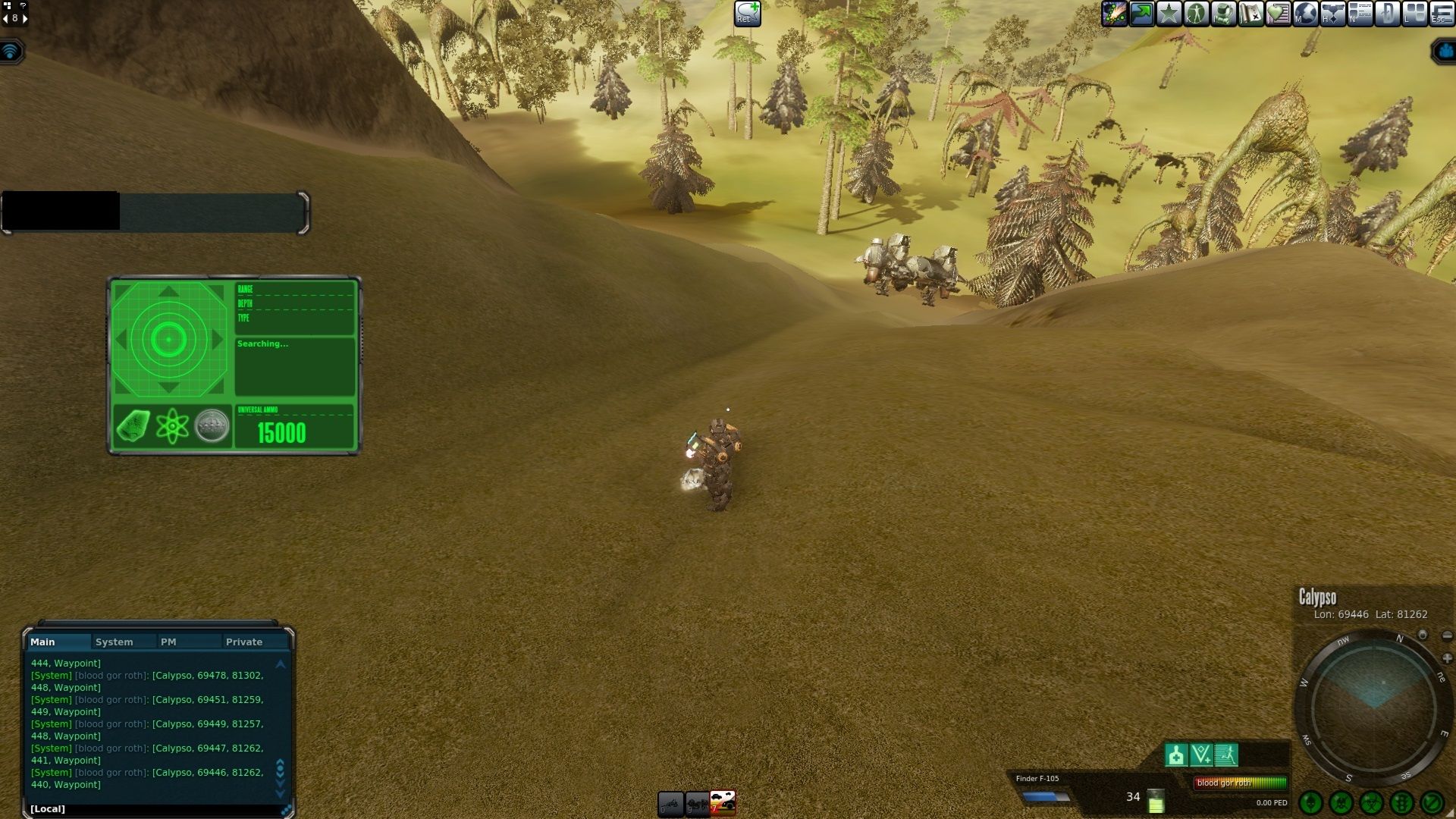 This screenshot highlights the situation I tend to look to avoid and why I don’t just carry around all my mining finds once I become overweight. My ship rolled down the hill which thankfully is not a huge distance. If I was much further up that would be a long slow walk to get back to it. I also carry a few ships with me just in case one of mine falls off a cliff and I need to recall it instead of trying to get it myself. 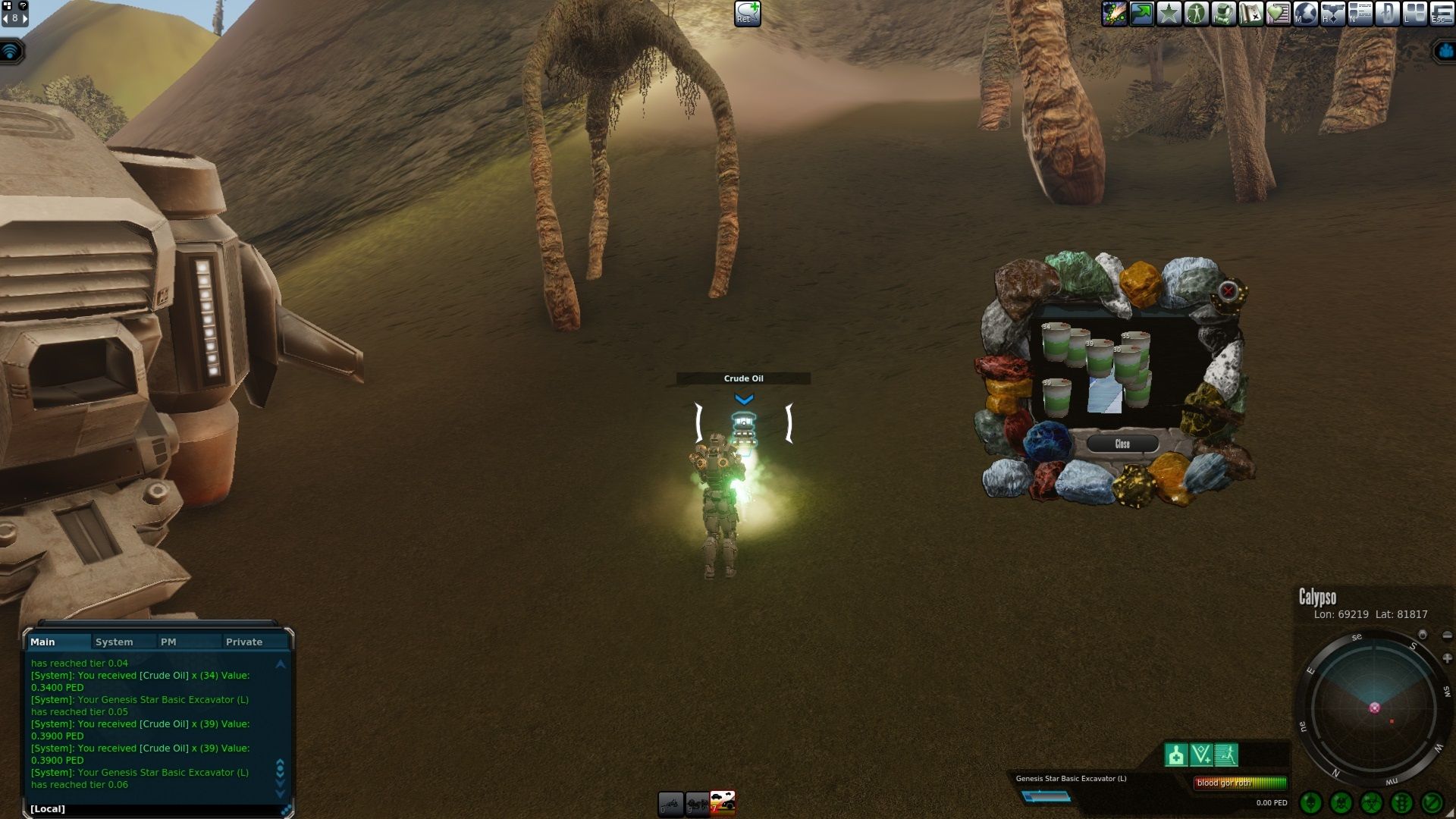 While the random area I was mining in where I was learning what could be mined there as I went along had some higher markup enmatters and ores. The bulk of my find ended up being oil. This is not helping any to recover the 105% markup I paid for the amps. Oil also takes forever to mine with a basis extractor.

In what felt like a short time I had broken my 3 D-Class amps and that was that for the run. Double dropping and amp mining are a bit crazy. If I was going to mine full-time with amps I would more than likely just stick to ores and places I have a good understanding of the layout.

We can see from the map in the Little Big Mining Log that I use that I got “lucky” right away. I had found quite a few claims right next to each other. There where however quite a lot of dead space around them and then a lot of nothing found while trying to find another area. I was also trying to find what was causing a perception check with no success.

Some that mine with amps might only use an amp if they think they have found a cluster area. Others just carry one around in case they ever get a perception gain and use it then. Many tend to save it for a spot they believe has a high chance if they are going to find something it will contain a higher markup ore or enmatter. 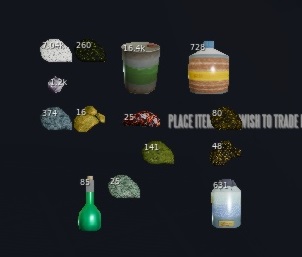 In total with this run of 3 mining D-class amps I ended up finding 36 claims. They were however of expected average finds for using this type of mining amp. As a result, this mining run was down 19.3%, and even if I exclude the amp markup I paid it would still have been a loss.

It was just not a good enough mining run. I did not find enough claims or big enough ones to cover the cost of this run. While there were a lot of oil and Lysterium claims. I also found some small amounts of stuff that sold for 108%, 134%, and 157%. Otherwise, everything else sold below the markup I paid for the amps I used.

Naturally, I went into this thinking it would be a loss and was more or less just doing it for fun. This was also quite a small run and a single post I don’t think is enough to show anything. As such, I’ll be doing a couple more of these types of runs. It is rather fun and who knows what I’ll end up finding.