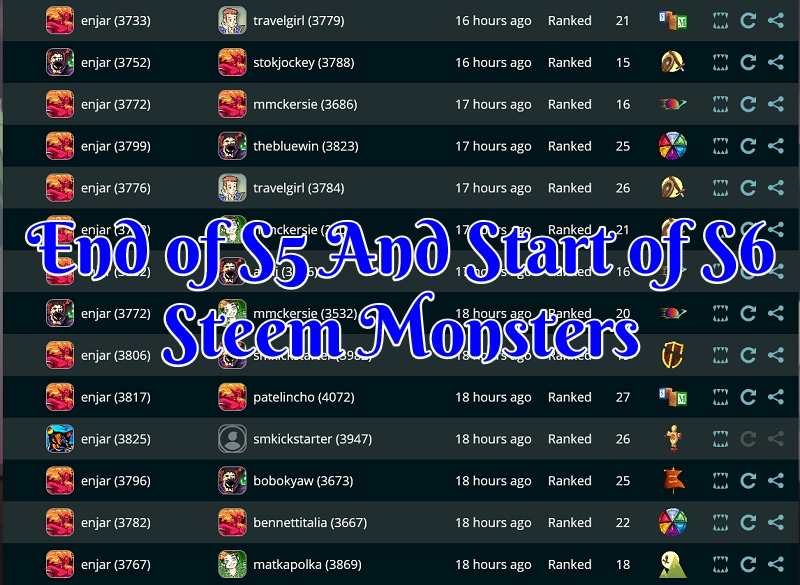 What a thrilling ending in Splinterlands season. For me, season 5 was more of a tiptoe into Champion III where I felt I just did not have the cards or the time in wanting to grind out till Champion II. It was a really fun season nether the less. 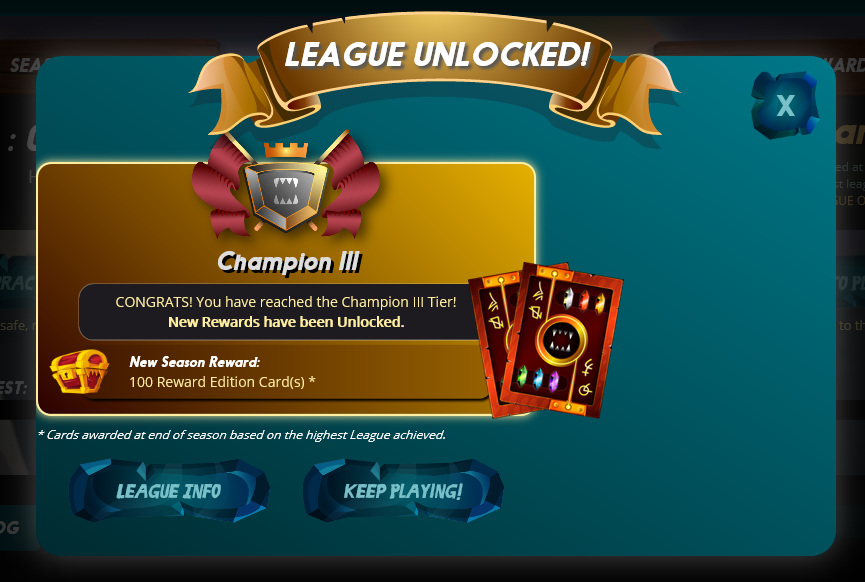 In the last few seasons I more or less just sat down in silver league for my daily’s. In season 5 my plan was to be in gold and do the same. I noticed very early on that the splinters I can play decently at fire, death, and life were having an easy time. As such I jump up into Diamond where I chilled most of the season.

Most of the times even when I did not get my best splinter for me (fire) I came out ahead on points almost daily. At worst without including the last day where everyone was pushing and I lost over 200 points I lost maybe 20 points. I even had some win streaks as well.

This was in part due to the fact I was just battling people in diamond who were just playing for their daily as well. Once they got there five wins they were done for the day and stopped. Any time I got a few losses due to someone with a higher or better throughout deck I could just take a break and let them pass. Patience is king in this game as long as you are not procrastinating till the end!

With how the daily rewards work in season 5 it just made sense to be in diamond after the first couple of days for 15 cards. It was not much of a grind and I would have spent similar amounts of time on lower leagues to get fewer cards for a similar effort.

This also meant when I started to look for my final push it was not a marathon trying to get from silver II to Champion III. I was already in Diamond II and it was just playing a few sessions over the last couple of days to make it happen.

For whatever reason so many higher level decks still sat in silver and sadly when the silver players made a run for gold well they got crushed! Same happened in gold and so on.

What made season 5 fun for me was getting to see the new daily reward cards and most importantly looting some of them as well. 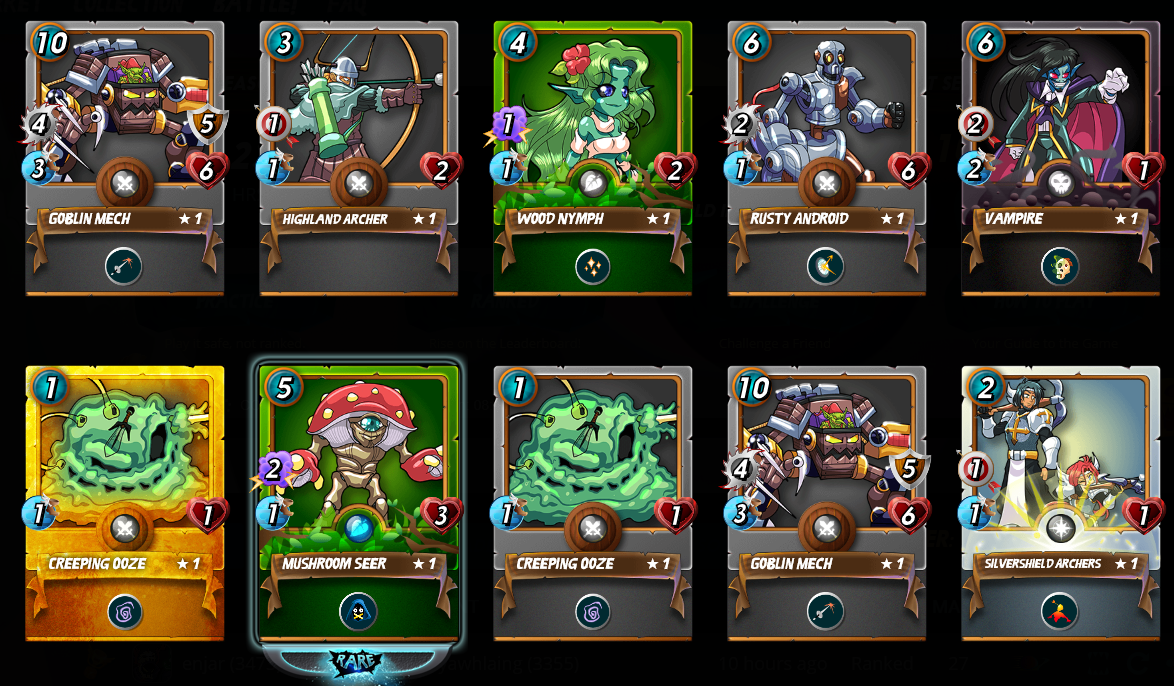 As far as my 100 pack season reward opening it was rather boring again like last season. This was my best pull. Still, for the level of cards, I can now make from season rewards not bad for just having some fun playing a few matches here or there daily. Who knows one day that card might be worth something when it stops dropping. That one mana ooze with slow is quite dope of a card for most splinters. Not so much for my fire deck since I already have better options unless I’m short on mana.

Keeping on with traditions in season 5 they are going keep releasing a few new cards. One of the biggest changes is going reduction in rewards from the dailies and a little bit in season rewards as well. As far as how I’m going approach it I’ll just aim for diamond sooner since I’ll only be losing out a couple of cards per day compared to last season. 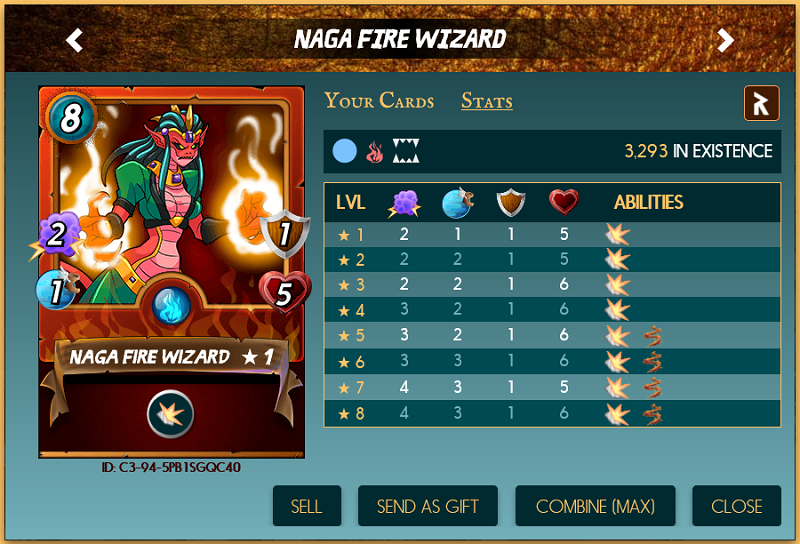 I can’t wait to see the next fire card and perhaps I’ll want it more than the 8 mana one they showed off during season 5. While right before season 6 I’m not into super high mana cost cards with Fire Wizard being 8 it also has magic damage so I have some options for placement on my team with the higher leagues expecting to have bigger mana caps. I’ll admit I was a bit harsh in judging it at first. Some of the other cards really made me go “WOW.” I am however eyeing that shield ability with reducing damage to ranged attacks. At the current price to get it to level 5, I’m tempted to just buy them. Still, with it being 8 mana, I’ll wait to see how playing in higher leagues like a diamond in need of higher mana cards.

As far as the season rewards go I expect a few things could happen. Either the lower level players are going be rather bored with the lower rewards and play less creating a bigger issue of not enough variety in opponents. They could also chase after trying to achieve similar rewards they did last season by pushing and sitting in a higher league this time around. That might even make farming daily easier for mid-level decks since they will start to see a lot of lower ones in gold and diamond. The only drawback is any of those higher decks that just always sat in silver for some reason not camping diamond and making all of us their playthings!

The bots are bots and they will keep playing if they get 1 card or a dozen. I don’t see any changes in their behavior there. I might not be worthwhile for more start packs to be bought for the purpose of botting the lower ranks for reward cards. That will, in the end, fall on how the price changes with a more restricted supply.

Right now I’m going to let the higher decks start moving up in ranking for first few hours to days. I’ll pick up my first daily when it drops but I’m going hold onto it and complete it a few hours later. I want other people to do the work of earning rating and me just sitting back farming later on. I need give some time for a big chunk of higher cards to go off into diamond and some lower ones to be eyeing those diamond rewards and go for it.

After a couple days into this league, I’m hoping to be in diamond II or I farming for 12 to 14 reward cards. Not really a big drop off for me as long as it’s not too much of a struggle.

I can’t wait to see what the new cards are! Perhaps I’ll even give earth a second chance to see how I like Rexxie being 1 mana cheaper. I’m not quite sure that a big enough of a difference but with higher mana caps as well it might be great options now.

Towards the end of the league 48 to 72 hours, I’ll make my run for champion III like I try to do when I have the time. Then I’ll just sit back and enjoy the show of everyone else waiting longer then they should have just to get more daily rewards first. Which to be fair you would be better off still doing your daily then just getting an extra 20 cards and missing out on three days of them. I understand some rather finish off at their highest league and not just get up there and then go back down. Since season rewards are based on your highest achieved and not where you ended I’m going still take advantage of that and not have any stress the last 24 hours of a league.

Have a great season 6! I hope to see many of you every day.

Screenshots were taken and content written by @enjar. Screenshots are from the game Splinterlands My Affiliate link.