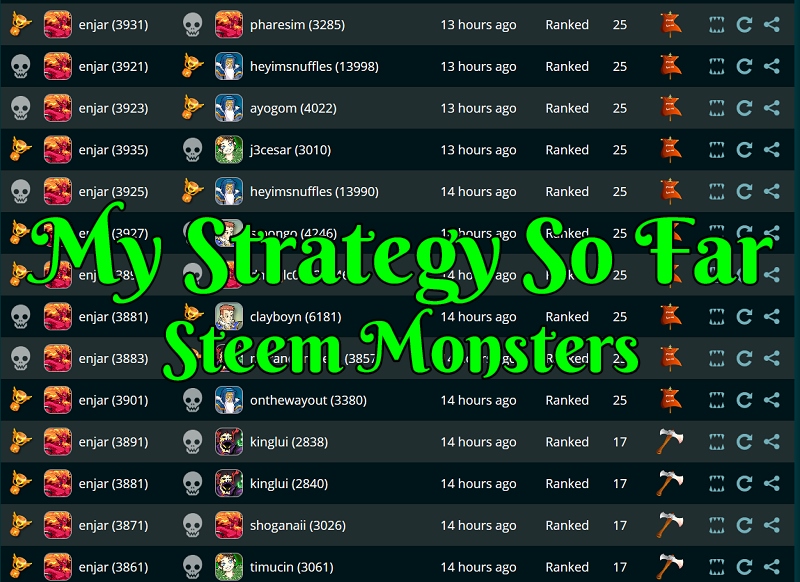 As someone who has played collective card games (CCG) and games that can have some long-term cost to them. I see it very important to think long-term in how you approach a game like Splinterlands. Taking advantage of what you can in the short term but not overdoing yourself on spending. I consider myself a “budget” player who put some investment in first to get started with plans to over time focus on building up my fire main and other splinters.

While having maxed out cards can help they are not needed to do decent in this game. This is coming from my own experience now reaching at least Champion III twice. I have even seen lower level cards under the right conditions earn more in booster packs then they cost to create. Sometimes seeing my own deck get murder by them as well. Which is quite amazing to see people come up with something that works at their level of gameplay. 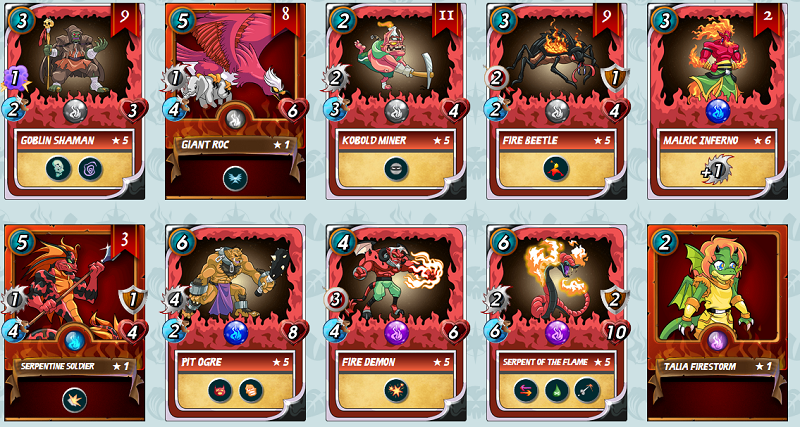 Most of my starting investments where into some Alpha cards. My long-term thinking of this is at some point I can start to sell off some of my Alphas and pick up cheaper non-alpha cards down the line to fill my gaps or even build a much more fuller and higher level deck. Along with wanting to be able to do dailies to some degree and gain ranking for free booster packs from season rewards as well.

While my main splinter is fire with a level 6 summoner and a couple of level 5 cards. My remaining splinters are just level 3 at best and not even that well rounded. During my initial investment phase before fully understanding the game mechanics, I made some choices that were a bit incorrect in my understanding. Such as my focus on melee over having a more diverse fielding. I also did not know what would be nerfed or buff. Along with just thinking around a 20 mana cap with teams that turned out not to be so great. There has been one saving grace to my choices and that was I expected card prices to increase.

As someone who has experience in the CCG genre of games I also expect there to be nerfs or buffs that are either foreseen or unforeseen. Even more so with this just being in Beta. Along with there always being that “must have” cards that will drive sales for booster packs and spending to buy them off the market. Of which I’ll resist that urge to buy the flavor of the month. Things get balanced out over time. At least in games I’ve played that has an effect on the price of that item being balanced as well.

While I did combine a few of my cards at the start to have something to play with. If I don’t see myself having a need to level up a card I’ll leave them alone until I have a need. While many are trying to sell leveled up cards at a premium I suspect unless there is a way to disassemble cards one day to get all that xp into single cards the sum will be worth more than the whole. In fact, you can sometimes see someone selling a leveled up card at a discount already.

As far as selling there are some other things I take into consideration. Using cards to acquire free booster packs has some value to them reducing the amount needed to sell for at least break even. Along with people buying at cheaper price weeks or months ago compared to where the price could be heading due to time, buffs, or nerfs.

I'm also used to people undercutting for a quick sale. Which is quite silly if you think about it as far as sales volume goes in leveling up cards. A common beta card requires 25 cards for level 5 and 505 cards for level 10. Why would you undercut the cheapest card unless you had a legendary or gold foil and did not want to wait? Just by the numbers on common, rare, and even epic you could get a better price and still sell in a timely matter when someone needs to buy in bulk. 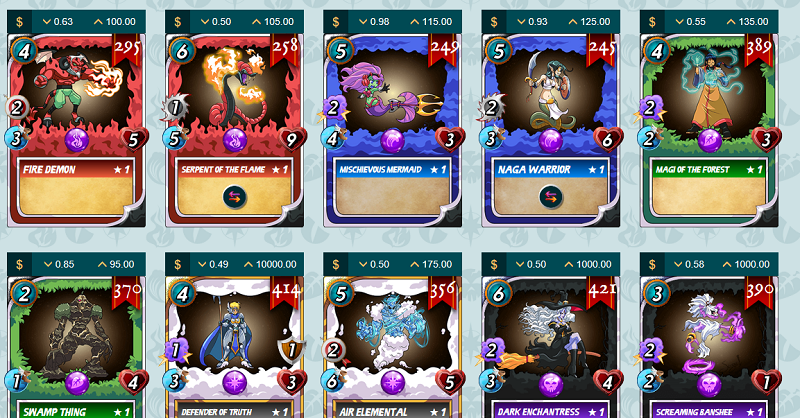 If in the event I do get a lucky pull in a free booster pack I plan to pocket some of it to recover initial investment and do some building of my splinters. Along with buying up what I view as “undervalued” cards. After all, it only takes an underplayed card receiving a slight buff to suddenly become worth quite a lot more. As we can see in these alpha epic monster cards there is a big price difference. In fact, some cards I wanted to get weeks ago have increased to the point I won’t be buying them now.

My long-term goal at the very least is to just keep building my collection. I’ll achieve this by spending a small budget amount from time to time. Entering contests that are giving away cards such as the many that can be found on Contestkings verified lists, and acquire free booster from daily or season rewards. Which I suspect if I do not grow fast enough, in the long run, I’ll see myself place lower and lower as the seasons go as other grow in levels. I’m a gamer first and an investor second.

I have been very lucky to make it to at least Champion III for both of these seasons and complete the major of daily quests as well during that time period. I did this as well manually as I still enjoy the game. While I don’t always watch how the matches unfold as a gamer I despise bots.

I learned in season one it was better to hold off on pushing ranking till we were getting close to the end of the season and with rules of combat that I felt was in my favor. At first, I would push and then I would get my daily that caused me hours of having to lose to just get low enough ranking. I then would want to push again to try and get further. This was just a lot of wasted time.

I also suspect since this is beta and we are using a blockchain after all that issues could happen to cause gameplay to be unstable. Such as what we have been seeing the past day. So holding to the very last few hours like so many other people always do does not seem like the ideal plan either. The last 48 hours could have combat rules you hate and you don’t want to lose out on season rewards just for a couple extra daily rewards.

For whatever reason people always procrastinate or perhaps they get a little “greedy” on farming dailies getting that last free booster before pushing. I do not want my level 5 deck to be getting crushed by max decks rushing to get from silver to Champion and falling just 30 ranking short of my goals. 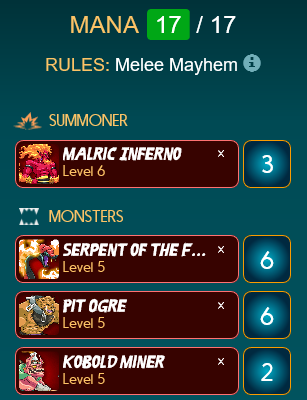 When melee mayhem started with just a few days left I knew it was my time to push with the cards I have. While they were not the best set up and I would prefer a higher mana cap I used what I had. I finished my last daily that I could while still leaving myself more than 12 hours under that combat rule. I went from silver to champion even despite there being some blockchain issues. If I would have failed I still would have 4 days left to make something happen.

There are also other benefits to not trying to push hard during the entire season. Everyone else has been gaining a lot of points while I’ve kept myself low just doing dailies. Making them the perfect farm when it’s time to go go go! In fact I almost on purpose a few times thought about killing off any streaks I went on with a 1 card deck to just keep myself from gaining too many rankings from wins. While I did not that could be an option next season I think about.

While I did not luck out and get fire for my daily quest today. I am only leaving 3 free booster packs on the table assuming after I finish this daily next season I do not get one right away. I also want to finish this time around in the champion league. Both so I have some champion points (just in case they become something worth having), and so I at least have Gold II rewards as the bare minimum next season just in case there are any issues with the reset like last time. Granted I did enjoy most of this season is in silver with level 3 cards for dailies.

As far as the rest of this season goes. I’ll try and get champion II if the blockchain issues clear up. If not I’m done playing and will enjoy some time away. I was around just 200 points from that goal but at this high of a league with my cards that could take forever to get if at all. I don’t see a need for spending all that time. While everyone else is stressing over running late and hoping to not be a few points short I get to sit back and watch the mayhem unfold.

Patience is key in this game but not to the point of procrastinating.