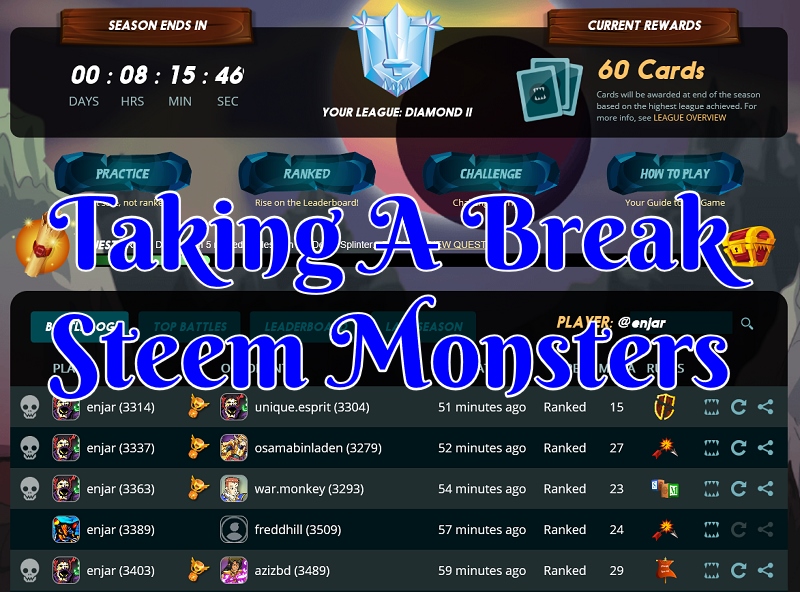 While I did not meet my goals of getting into Champion III this season I’ve hit a point where I just need a break from the game. Tonight when season rewards become available I’ll enjoy the act of opening them and then taking the next season off. No dailies, no ranking for season rewards. Even if they add in full support for tournaments being done 100% from within their site while I’m away. I’m not going cut my break short. It’s just the healthy thing to do.

As a gamer I knew when I’m no having fun and when it’s time for that break--you take it. This game is only in Beta and we have a long way to go. If I push too hard now I’m going hate the game and be miserable trying playing it. This is something I want to enjoy for years and not months.

I’ve seen a lot of players make excess to not take a break and they are so unhappy. It’s always the same “I spent X amount I need to get my money’s worth.” So they keep going after that daily, season, new reward cards, tournament, whatever. As the days progress they seem to be getting more angrier. If you’re not having fun regardless if you are a gamer or investor or collector it’s good to take a step back. You need to think about this game in the long term and where you are going be with it. I hope still playing and not so burnt out you are sickened by the thought of another match ever again.

There are so many games I love out there for instance Path of Exile. I have gone months to even a year with taking a break from Path of Exile. I still love the daylights out of the game even to this day because I know when it’s time for a break. In fact, if you check out my blog you will notice a lot of content for Path of Exile as of late. I have enjoyed that game for years because I don’t make myself miserable by overdoing it and taking a break when needed.

It’s far too easy to fall into the trap of “I’m going get left behind” if I take a break now. If you somehow think that 2 cent reward card is suddenly going be worth 100 times that amount in the next few weeks. Well, I got some swamp land to sell to you in Florida. The current reward cards are far from being depleted. Even then things change in the short run to drive players to other cards. In the long run, those older cards could suddenly be very useful. That could be years down the road you never know.

Back when I use to play Entropia Universe a real cash economy game. Items that were more or less worthless and vendor trash that very few people held onto or never repaired become worth a lot of years later. This was due to things that stop dropping and some game changes. Add on top of that many players with certain items stop playing and never came back to the game. They will never know the item(s) they tossed into their bank before quitting the game became worth a small fortune.

When you think of Steem’s overall turnover rate and just how many people will just stop logging in one day or even playing Splinterlands. Years from now how many of those cards will be unused and perhaps never again enter the market. Many people are holders for the long run so they don’t sell off Steem or cards or whatever. They might never remember about checking in to see if their cards become worth a fortune, they could lose their keys, or there are other reasons as to why they don’t return.

So it’s time for a break from me regarding Splinterlands. At least for me at the end of the day it’s only a game. I really don’t expect the small number of cards I have to be worth life-changing amounts of money. I am expecting a very nice return on investment. Which I have been enjoying along the way. With writing about the game, referrals, and even selling some cards here or there. From the amount or Steem I’ve spent vs what I’ve earned I’m already in the green. Here on out, I’m just in for the ride and fun along the way for the most part.