One of the nice benefits of visiting different planets in the Entropia Universe is collecting a bunch of different stuff. While most of the stuff tends to be starting items for rookies you tend to find other things as well.

While there are a bunch of different things to easily get these are some of the ones I’d recommend getting. Some times are not so quite worth it. Finally, there are things you have to put in some effort to acquire and are beyond the starting-off type of items you usually find. Even if you don’t need a bunch of rookie items in this game anymore. You also do get a small amount of universe ammo, survey probes, and weapons you could always use later for skilling. One place that has a lot of missions and things to collect is going to be right next to the teleporter in A.R.C Staging. There are a dozen or so NPCs that offer all kinds of missions. From gaining daily mining and crafting skills to mining missions for everything you can gather on Cyrene. This is a great hub to hit up overall.

Engineer Ferguson has two missions that require you to craft or buy the item in question for the turn-in for getting vehicles from Cyrene. Getting Crafty requires 10 Light Power cells. While Even Craftier is a much harder mission that wants 10 medium power cells

Getting Crafty awards you with this Spear Mk. 1 (L) and a little bit of oil which is shown above in this section's screenshot. It looks kind of like a jet ski and it goes over water and land which is great for a planet like Cyrene. It takes 8 Low-Grade Power Supplies per craft. If you are someone who is farming your daily A.R.C Faction Badge mission killing Scout Bot Collector XT’s you will end up getting a lot of those power supplies as those creatures tend to drop them at a decent rate. 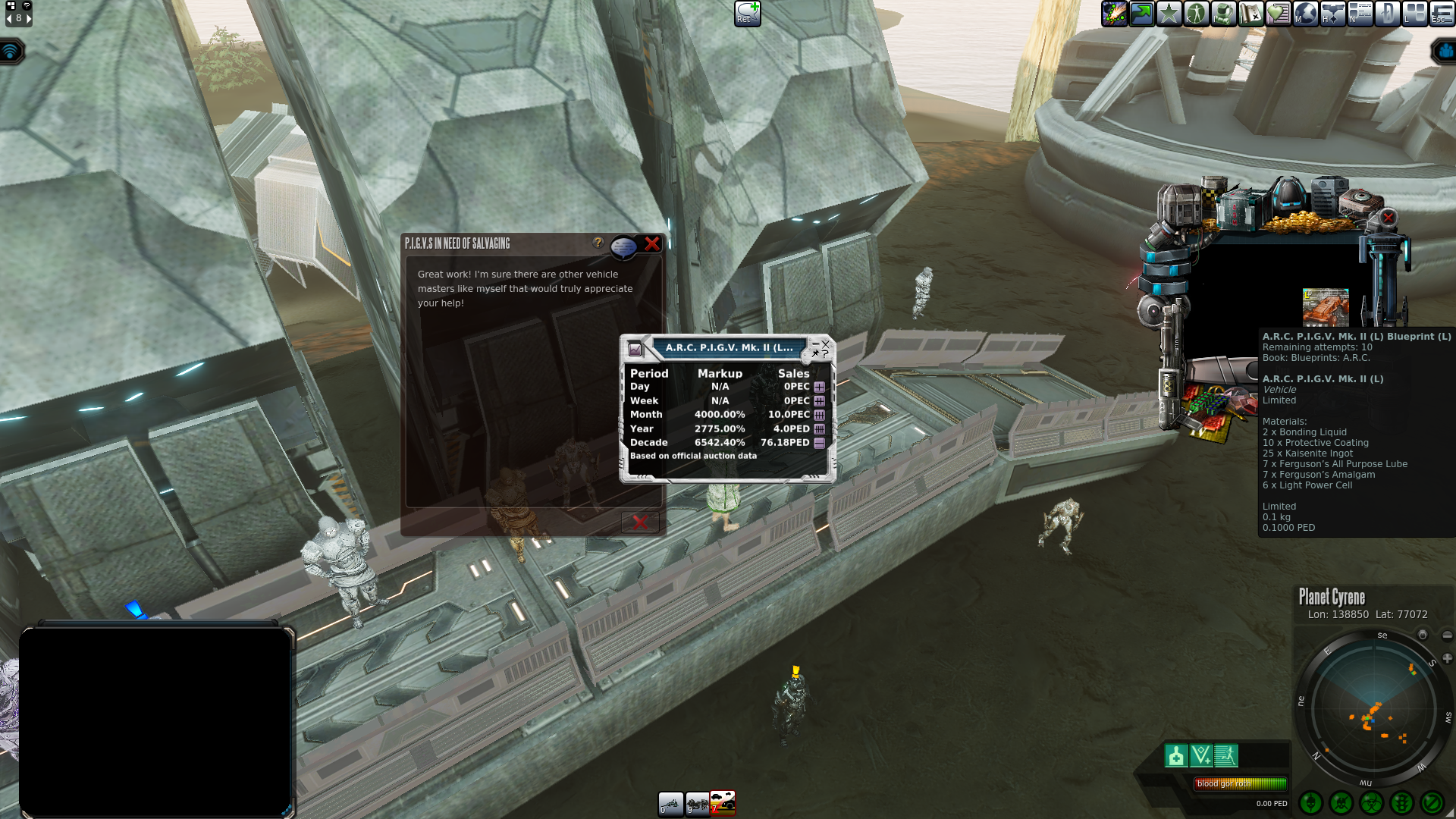 While your eyes might flash over in amazement when talking with James Williams due note those rewards are just for blueprints (L). Two of the missions Weapon Parts and Clothing Parts require you to go into lootable PvP that requires buying a PvP Shot off the vendor for one of the collection points in each of those. P.I.G.V.s can be done without entering into lootable PvP. Either way, the locations for these collection points are scattered all over Cyrene.

While these blueprints might show some decent markup on them. Unless you are going to craft these items yourself and have the skill to do so. Cyrene only things can be quite hard to move and you don’t see a lot of action from what I could tell for these blueprints. A fun thing to do while on Cyrene if you can find all the locations. One thing you will notice a lot on Cyrene and perhaps when you visited other planets as well is everyone is always running around with this hammer equipped. It is called a Maze hammer and it gives a 10% increased run speed while equipped. It is super easy to get. 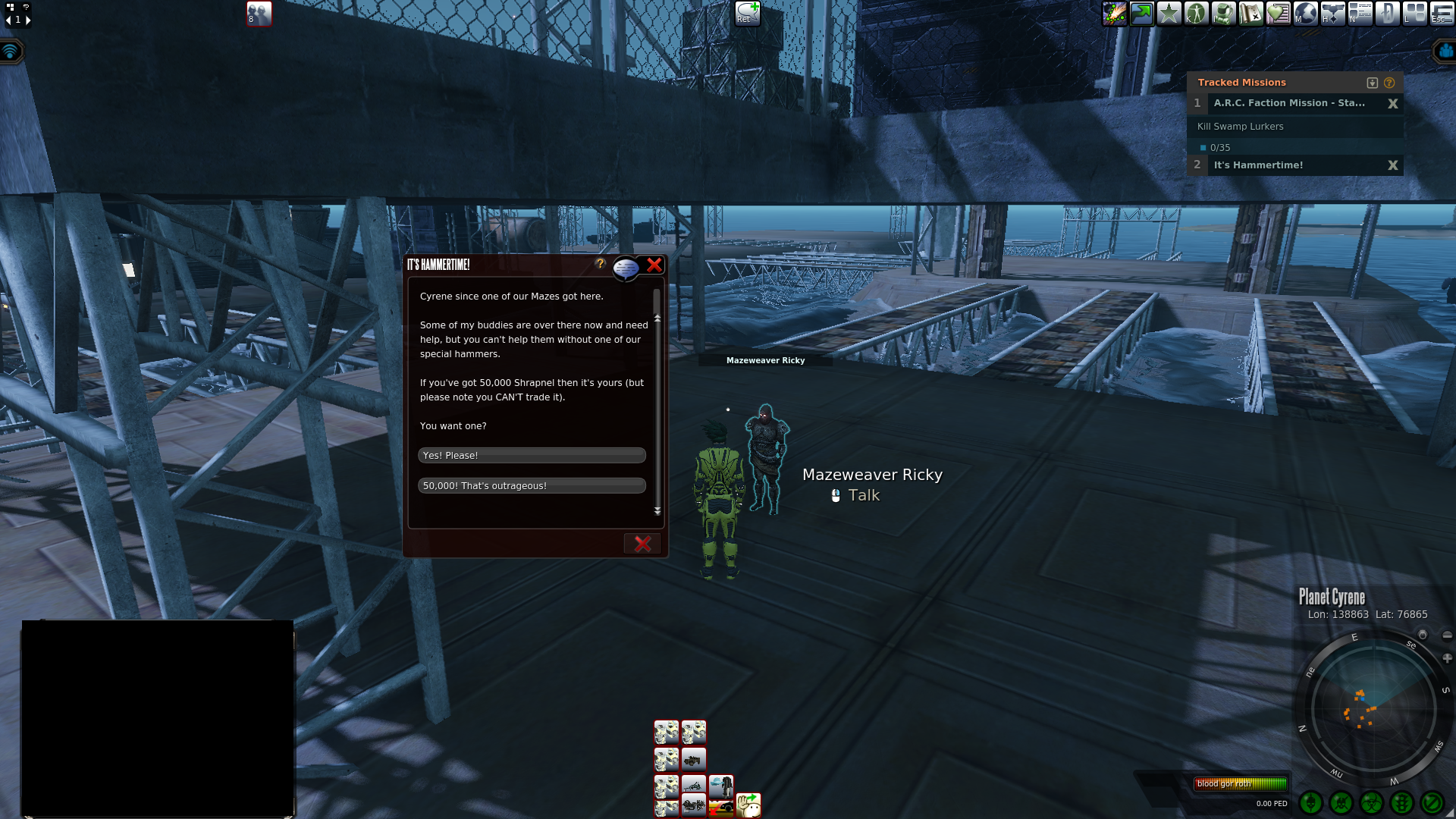 All you need to get the Maze Hammer is 5 PED worth of Shrapnel (50k units) to turn into the NPC Mazeweaver Ricky for the missions It’s Hammertime. He can be found on the docks at (138863, 76865) near the Turrelion Docks Teleporter.

Since the item is also a weapon you can use it to level up some skills and decay it down a bit to get some of that 5 PED you spent acquiring it. Just make sure to leave a couple of hits left so the item can be equipped for getting the speed buff. It is also repairable if need be. If you are a crafter and want a plate blueprint you can talk with NPC Zyn Shaman Toq’Quak who lives in a treehouse around (134797, 76750.) This person will send you on a fetch mission to find seven missing recipe pieces. Once done head back to the starting NPC for a turn-in and be rewarded with the blueprint. Other than all the flying around you had to do it is quite an easy mission. If you have way too much time on your hands and a lifetime possibly to waste you “might” be able to farm up a coat for free or at the very least some clothing. In The Hub, you have to select from a drop-down menu while at a teleporter. You can collect green tokens that spawn on occasion in the proving grounds found within the side.

I don’t think it’s worth getting as the clothing looks quite ugly and the grind for the coat is insane. There are only a couple of the coats in-game from my understanding. You can farm a lot more by hunting creatures in a dungeon there but that is not free.

Either way, you could collect 550k lime green tokens for the coat if you are going to live on Cryeen and put a lot of time into it. I personally after collecting a few hundred tokens decided I wanted to do just about anything else. You can find more information about The Hub in this post. Every day you do a basic run of M.A.R.I.O.V.S. a parkour challenge that you can enter at (138558, 77218). The reward for doing the free run is a Cyrene Mission Token. The more advanced run and other parkour challenges require tokens. A more detailed guide on these can be found in my Cyrene Platformer Challenges post. 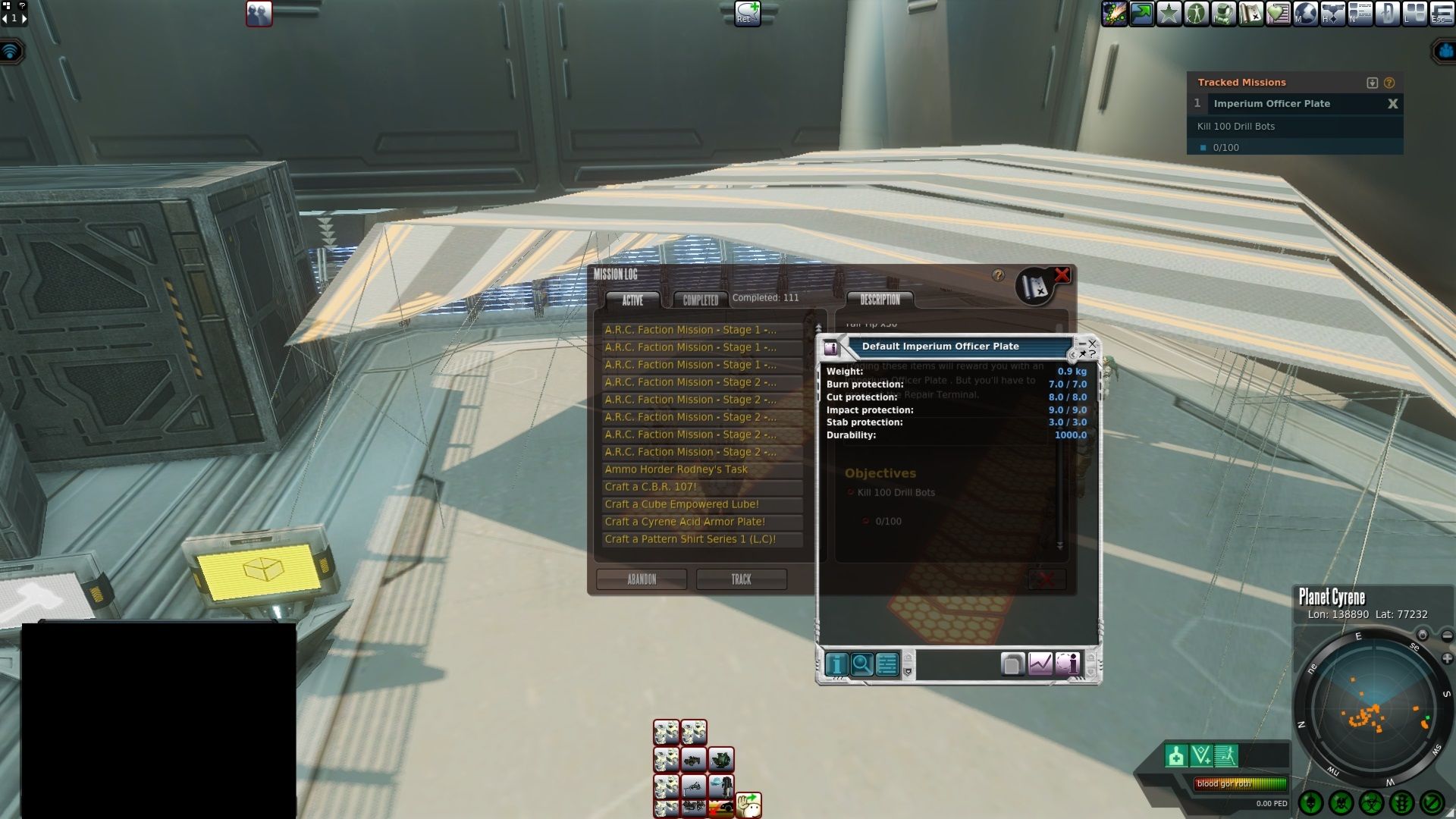 Beyond these missions tend to have a very low cost to acquire other than the time spent getting them. There are a lot of other amazing things to get while on Cyrene. Some of them are quite the grind feast.

You could work on getting one of the best non-Uber eco FAPS in the game. I have a mini-series on acquiring it (part 1, part 2).

Along the way, you might find yourself in need of collecting A.R.C Faction Badges and I have a complete overview of doing that.

You might also find yourself wanting to work on the Cyrene special plating.

While there are a lot of other things to do on Cyrene. All the first few sections are great if you are looking to spend for the most part just a couple of hours here or looking for some cheap fun. It is quite shocking how well put together Cyrene is compared to other planets.