Imperium Armor Plating once you first get them does not look that impressive. Many not understanding what they are end up tossing them up on the market for 2 PED each and moving on. These plates however can be upgraded and even just the next tier up is such a massive boost to the protection. It could be well worth the effort if you are someone needing more sets of plating for your gear for different types of damage.

While you could just buy the Imperium Armor Plating I off the market if there are any. The missions for the most part are easy. Five missions I would say anyone could do without much struggle. There are at least two that are a bit more challenging. Even so, if you are a mid-level player which is the kind of person that would want to work on getting these plates this should not be a problem.

Unlike other planets where they might only give you one plating and it’s usually (L). These things are unlimited and most importantly if you are willing to grind for A.R.C Faction Badges you can upgrade them. 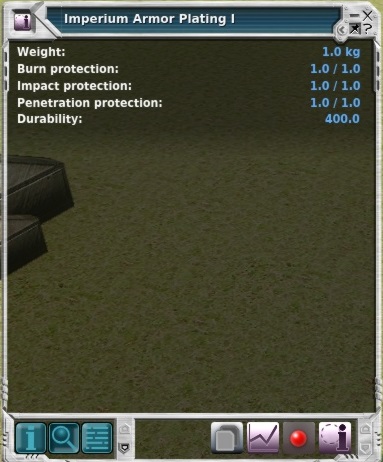 All on themselves the 1 burn, 1 impact, and 1 penetration protection while not massive might help add some protection for Cyrene creatures if you simply don’t have any plates for that kind of damage. They can be rather nice for hunting small creatures to the point your natural health regen makes it so you are not needing to heal anymore. While wearing very light armor and these plates attached.

There are 7 missions in total each one awarding 1 Imperium Armor Plating. Many of them just go out and kill some low-level maternity creatures. You then come back for the turn-in and move on to the next missions. 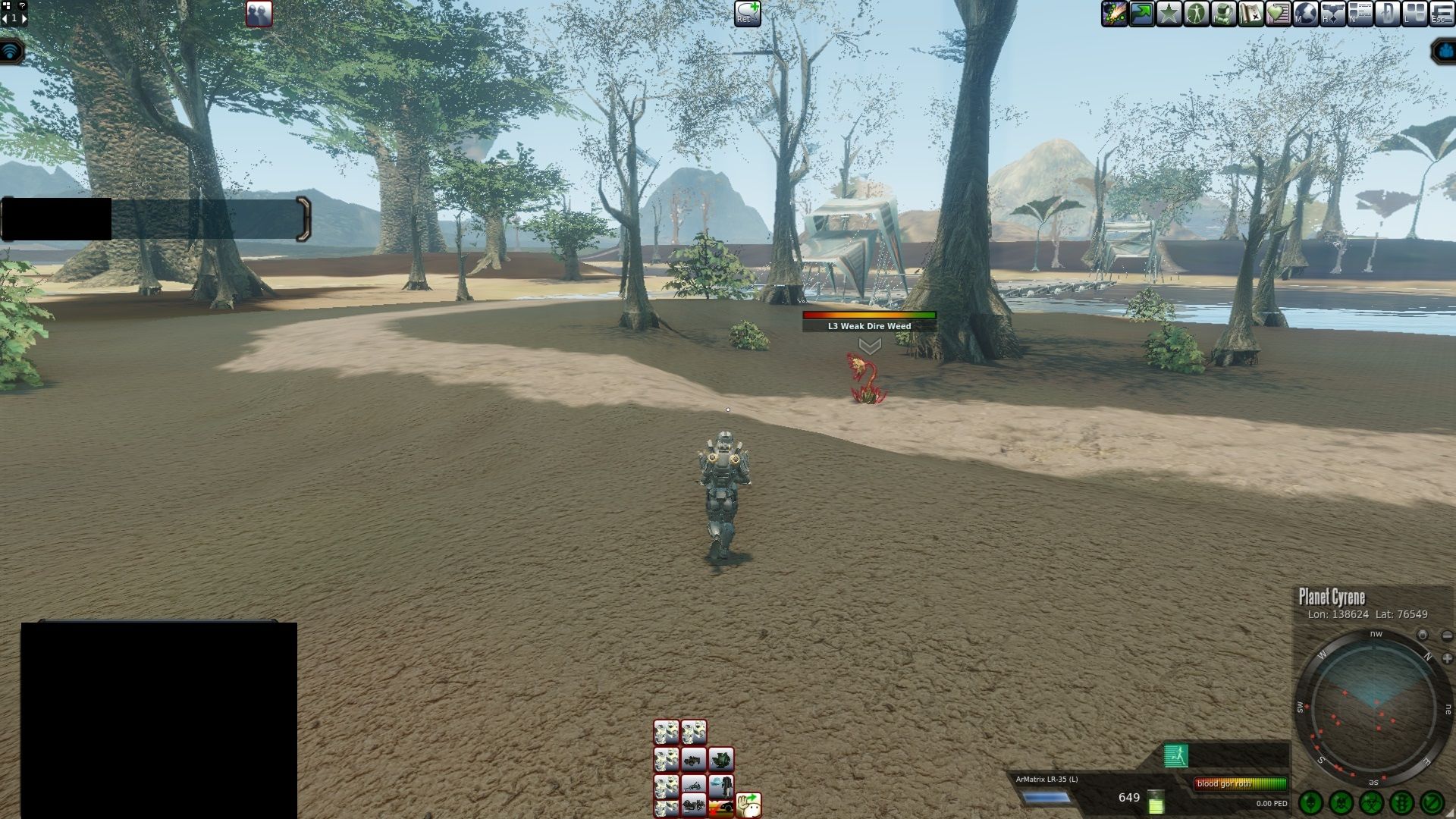 You can find Guys Mission just west north-west of Atlas Hunting Grounds teleporter being offered by Garden guy. He wants you to kill 10 Dire Weeds next to the camp.

A large spawn of level 3 Dire Weeds can be found east at (138585, 76505). Unless you are brand new to the game they should not be of any challenge. They are in an area filled with other low-level new player-friendly creatures.

The next mission can be found just west of A.R.C Staging teleporter by an NPC called Dr. Nikolo who standing by the wall offering a mission called Dr. Nikolo’s Bug Problem at (138787, 77098). Where you need to go out and kill 20 creatures and the game will give you a waypoint to that location. 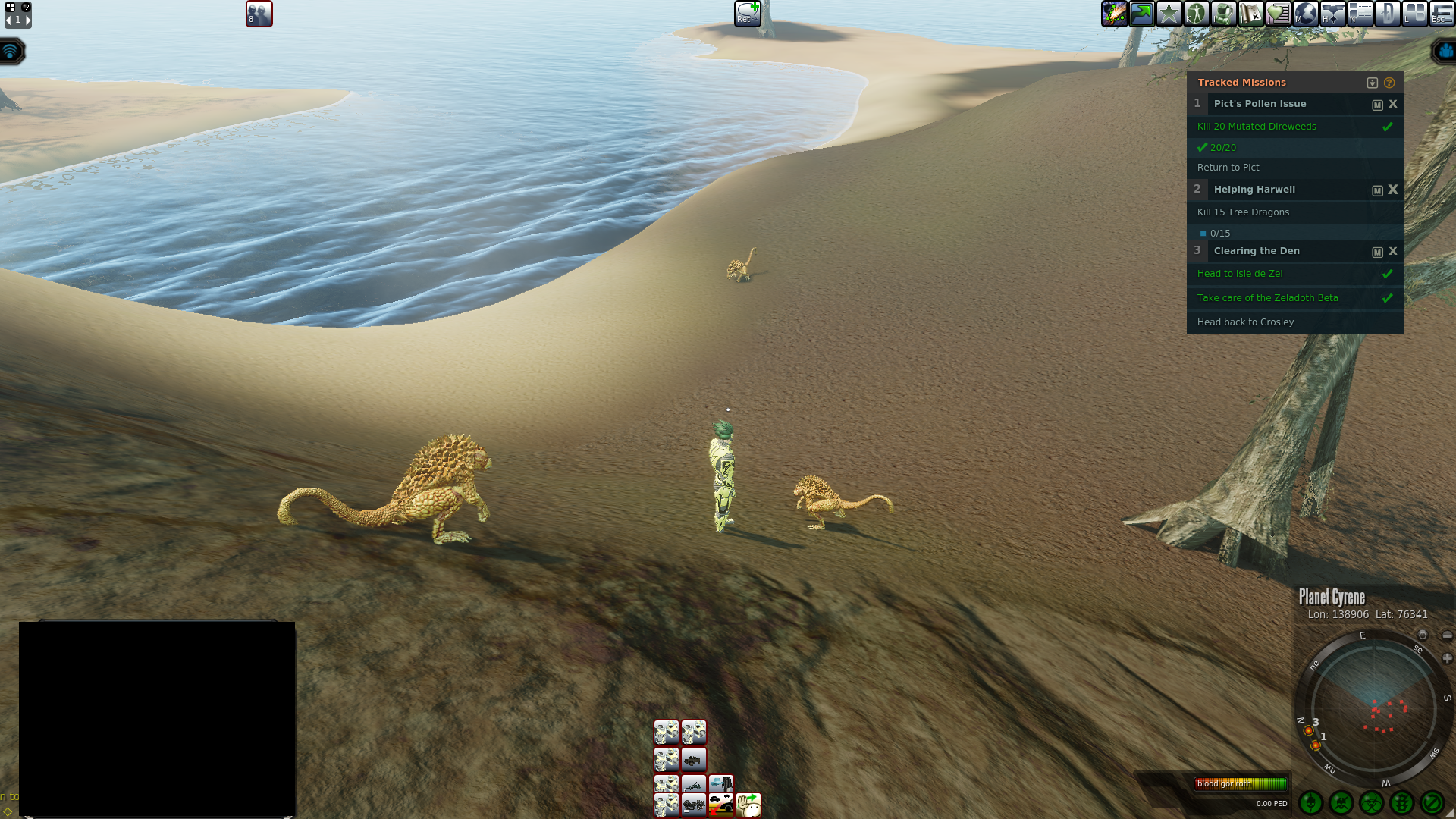 Two NPCs over from Dr. Nikolo is another mission called Helping Harwell being offered by an NPC called Harwell (138783, 77095). He wants you to hunt 15 Tree dragons. You can find a bunch of low-level ones on the east side of the island Atlas Hunting Grounds is on at around (138906, 76341).

After those missions, you can head up to the Rookie Training Area teleporter, and right at the helicopter (138783, 77711), you can pick up a mission called Lt’s Viewing Pleasure by an NPC named LT Lockly. He simply wants you to go out and kill 10 creatures in the area. This area also tends to get a lot of lower-level players who are sweating the nearby level 3 Weak Paneleon. There are more than enough to go around at around (138769, 77786). Just try and be reposeful of activities other players are engaged with. There are a couple of spawns of them nearby so if they are heavily camped just take a few steps to the east.

Caption Doan who can be found at (138335, 77214) just northeast under the tents of A.R.C Immigration Tanhok offers the mission Help The Cap’n . Follow the waypoint the mission gives to explore an abandoned base where you need to kill 5 Imperium scouts. This can be one of the harder missions for an Imperium Armor plating and is a bit of a distance away.

Once you have completed the above mission Help the Cap’n you can move on to the next one called Hollingsworth’s Other Task which can be found at (138779, 77089). The mission wants you to kill 20 swamp lurkers and give you a waypoint of the spot you need to hunt them at. 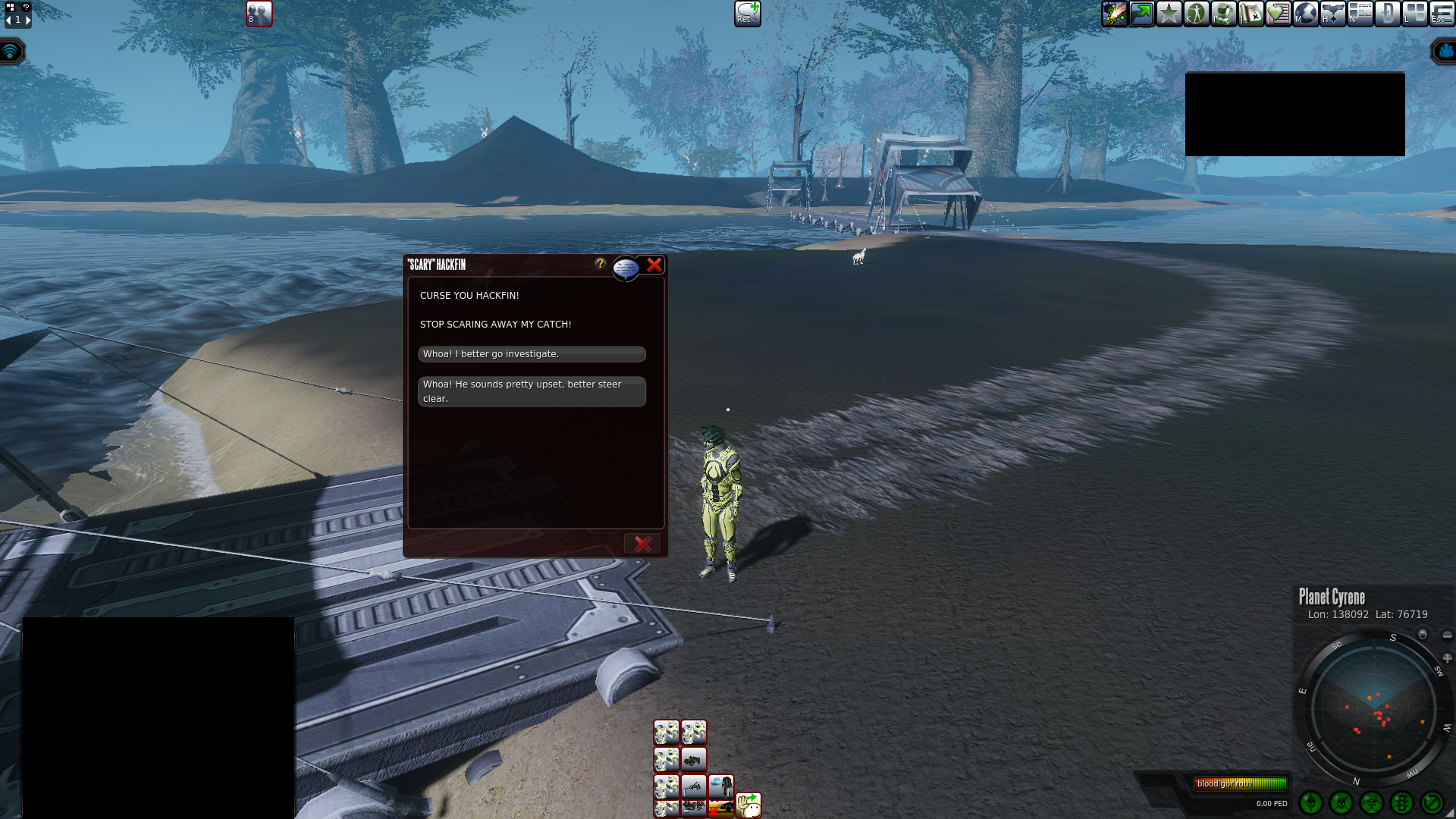 For the next mission If you just fly out to Long John Silvers (138112, 76693) you will discover he is not offering you the mission Scary Hackfin for an Imperium Armor Plating I. That is because there is a bit of a trick to triggering his mission. You need to start at the bridge and walk to around 138092, 76719) to get the mission trigger. Then you can talk with him about the mission.

Once you get his mission the 20 Hackfin you need to kill can be found in the nearby water with a large cluster of them at around (138120,76972). If for whatever reason you have struggled with a level 4 creature just shoot them while swimming backward for a little extra help.

Once you have completed all 7 missions or just bought 7 Imperium Armor Plating I off the auction house the real work begins. While these plates can be upgraded 6 times each. You must meet the required A.R.C Faction Badges threshold to gain access to the missions.

If you are looking for ways to earn A.R.C faction Badges I have a massive guide breaking down all the different ways to farm up a bunch. It will something like a month or longer for many players before you reach 300 badges. 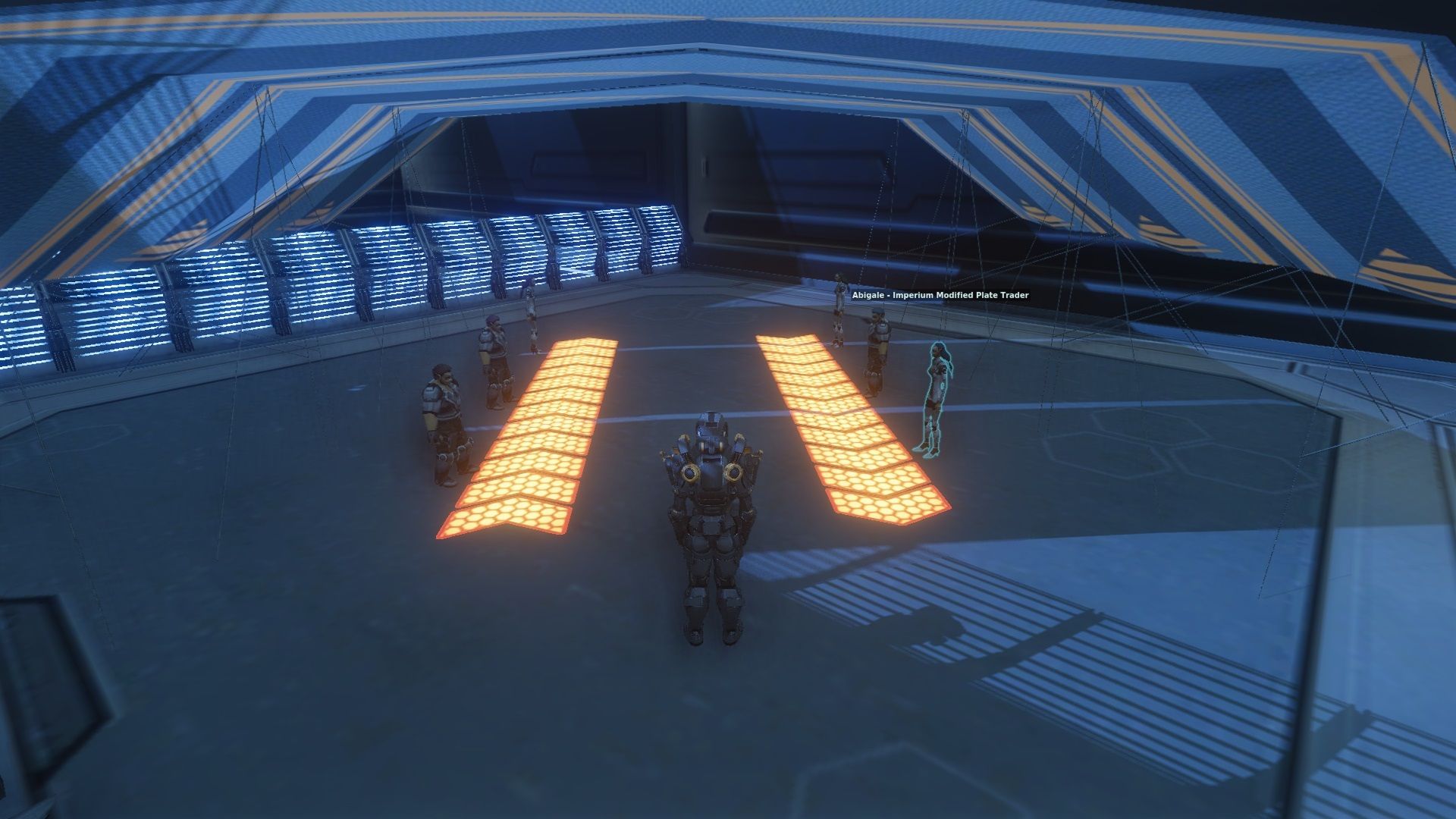 The Plate upgrade missions can be found on the second floor of the A.R.C Headquarters teleporter.

Unlike the missions to upgrade armor pieces. These missions for imperium armor plating do not give context clues to how many A.R.C Faction Badges you need to advance to the next stage of things. I only know the first upgrade mission from Imperium Modified Armor Plate trader requires 300 badges since that is now what I have. 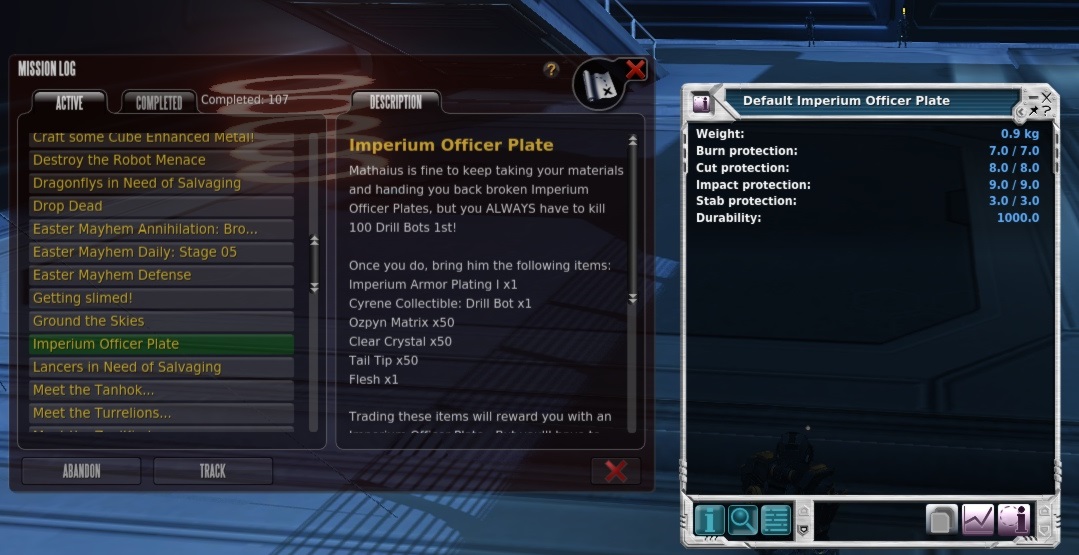 You will need to complete the mission 7 times as each time only upgrades one of your platings. Along with a list of items you need to turn in, there is also a 100 kill requirement of Drill Bots permission.

While it might be tempting to try and farm everything needed. That will take quite some time as many of these drops are at least uncommon if not harder to get. At least it’s not as rare drops that the armor upgrade missions require.

The Cyrene Collective Drill bot usually sells for around TT (10 PED) + 12 PED or less on the auction house. These are crafted by a blueprint of the same name that uses the carpenter crafting skill.

Another cartable item is the 50 Ozpyn Matrix. These are at least a lot easier to make. If you want to buy them off auction you will need to buy in bulk since each one only has a TT value of 0.03. 50 of them would be worth around 1.71 PED with a 114% markup.

Clear Crystal is a mining enmatter that I have not found as of yet on Cyrene. While people are usually trying to get 150-200% markup for it since you only need 50 that will set you back by about 10 PED for 50 of them.

The most expensive thing on the list will be the Tail Tip due to how many you need. As people usually sell them for 1 PED or more each and you need 50 of them per plate. The Tail Tips themselves drop as uncommon from Paneleon and many farm the weak maturity for them in the Weak Paneleon Hunting Cavern which can be found southwest of the Rookie Training Area along the wall before exiting the city (138739, 77623).

The last thing you need is 1 flesh and those tend to go for 20-30 PED for 7 of them. They can drop from Empis Wasps, Dusters, and Horned Whisker Fish from my understanding. They tend to be common drops so not that hard to get. Upgrading a full set of 7 plates going by the auction house prices at the time of writing will set you back around 600 PED not including having to kill 700 Drill Bots in total. This is also just the first upgrade mission with there being another 5 once you get enough A.R.C Faction Badges and all of the mission items required.

While quite a cool armor plating to have. This kind of thing is going to be geared more for medium and up players in Entropia Universe. For many that might be a bit much for investing in just a set of armor plating. Not to mention if you can’t get all these items off the auction house in the quantity you need you will have to go hunting for them yourself.

I will try grinding out a few tail tips and some other drops just to see how long they take before I start taking the plunge to upgrade my plates. While this first upgrade ended up being a lot more costly than I was hoping it would be. I would not mind having UL plating with these kinds of protections in my storage unlocking more things I can hunt.