Not all trips to the casino can be winners. Many times the total cost ends up being more than worth the fun, adventure, and experiences you make. It was not an insane trip by any means. It was a bit lackluster, although, all it takes sometimes is just one spin to turn things around.

I’m not one of those people that go and gamble alone. I’m always with someone and we tend to have a side bet going for the trip. The winner buys the loser dinner. It helps soften the blow a little bit if you had a day of getting kicked in the nuts by the casino.

Many times the mood of the casino gives you a real feel for the floor. This trip like many of the latest trips had a bit of an undertone negative feeling. People are losing and the floor lacks enough winners to keep everyone upbeat.

This trip took a decent amount of loss for the first couple of hours. If I don’t tend to have a decent win to take out the camera I’ll sometimes start taking a few of whatever I can get. I like to have at least a couple of photos of the trip if nothing else.

I always set a limit for how much money I put in each slot machine according to my bet size. I’ve seen far too many people chasing after something feeding their entire purse or wallet in. For me, I like to have some variety when I go.

I had half a dozen tickets in my wallet with just cents left after cashing out before I sat down on Fu Dao Le. For whatever reason, this slot tends to have jacked-up screens that can sometimes make it hard to see. They are also quite known for no longer have working speakers which takes a bit of the fun away in my opinion.

It also has when you are having a bit of a down trip a fun spoiler screen to get. This lets you know you have something coming your way. Many people call it the babies showing up to wish good luck on you. While I know it’s just a spoiler that spin would have had a nice hit of something if the game didn’t include a spoiler screen. It sets up to be excited for whatever is unknown is coming your way. I ended up landing a bonus and snaking one of my first ok wins for the trip. I’m just a low roller so 50 times my bet and walking away from being up is a win in my book.

When I do go there tends to be a couple of machines I love to play with. I’m a big fan of Game of Thrones and The Walking Dead slots that are at this casino. Usually, I’ll alternative between one or the other unless the trip is going well enough to play them both. 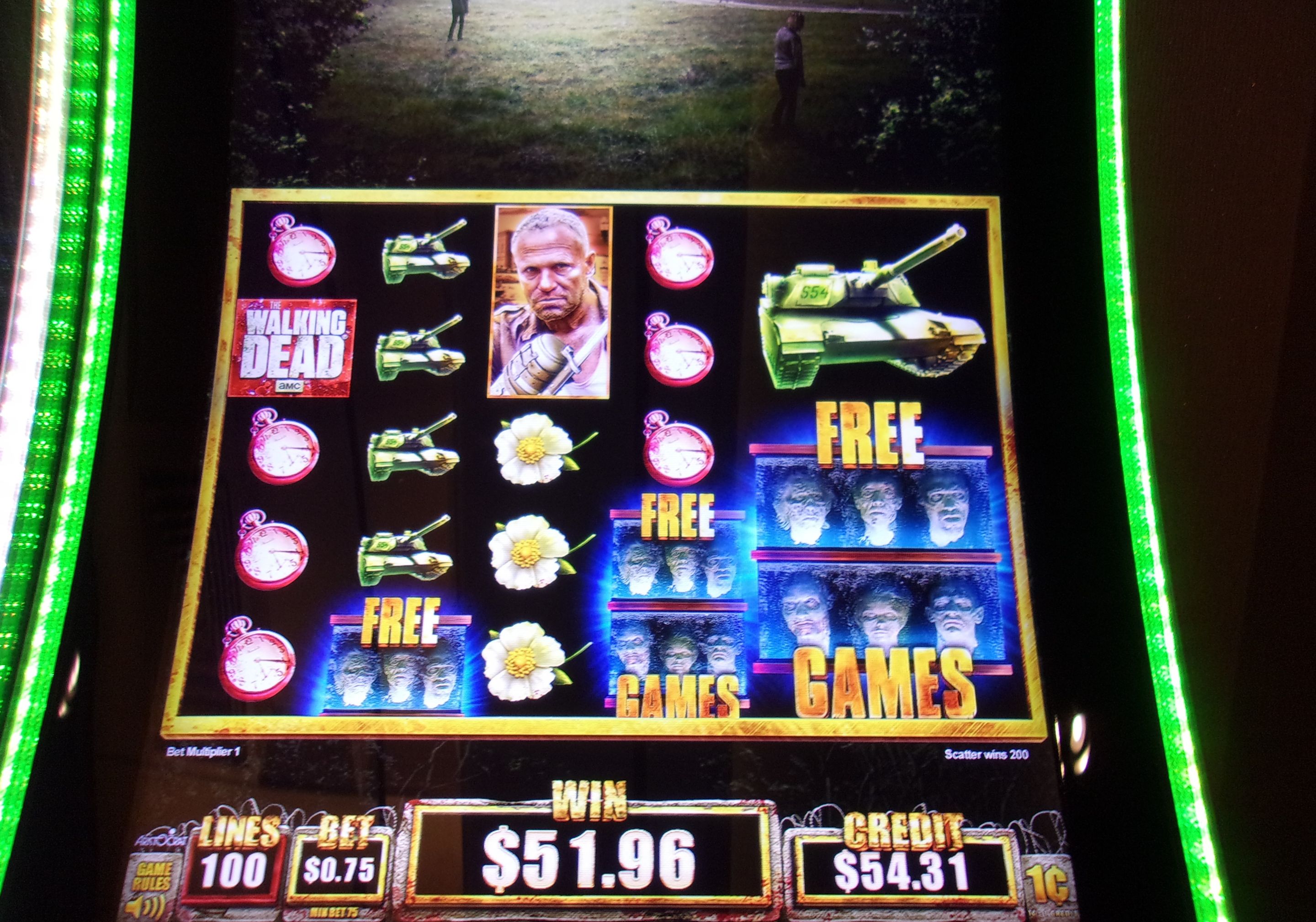 Game Of Thrones has a bit of a higher bet amount and I was just not feeling it. It also had been a couple of trips since last sat down on The Walking Dead. I was down to $2.35 before finally landing the free games. Sadly I did not get the bonus pick that lands in the last slot so I just had a normal bonus. 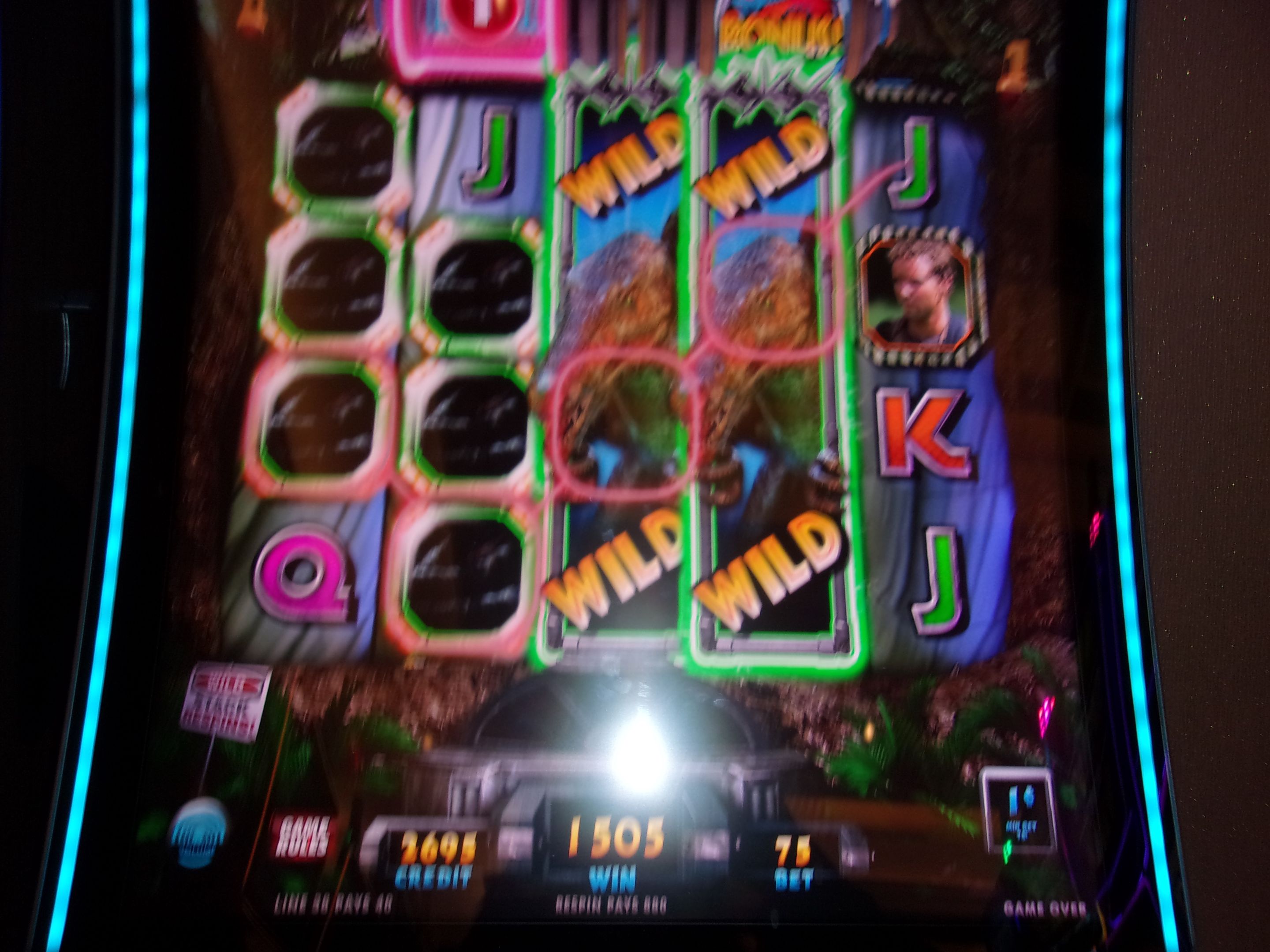 With how the lighting is a lot of the time the photos on the tiny camera I take tend to be a bit blurry. I recall sitting down on Jurassic Park Trilogy and this was the biggest hit I got. I felt with how the trip was going that taking a $15 as my last spin and only walk away down a couple of bucks.

It’s funny when you think about all the little things you do that end up changing that exact moment you press a button. Many times things will occur on my trip that somewhat alters the fate for the rest of the trip. Who knows what I would have hit if I had kept playing Jurassic Park Trilogy I just know other things would have not happened.

My wallet at this point is starting to get a bit empty in the bigger bills department. While you would have thought it was more with how thick it was getting. I knew from the beating I was taking funds were getting low.

I was also rather done with this trip. After six or eight hours of gambling and so few wins to show for it, my mind was getting out and being done. I walked up to a bill exchanger hoping I could turn some of my smaller bills into larger ones. I was wrong. it split it into ones adding what felt like an insult to injury.

So I walked up to one last machine and I was shoving $1 bills into it like a stripper. For the best size of the slot, I was only going to get a few spins. I usually play in the 75 cents to $1 range when I can. More More Chilies is a 2 cent machine where I play so 1.60 min bet.

What is fun about More More Chilies is there are no mini or grand to win it’s all about unlocking more sets of reels in the bonus. As it spins you start with just 2 slots of reels and the more chilies you land the crazier it can go. On top of that once you are far enough along the last reels in each spin start to become wild. In the end, I unlock 8 reels. While that is not the maximum amount if you get a couple of last spins with at least that many with the last 2 on each reel being wilds you can get some decent wins. My biggest earning reel alone was $149.8 which beat out every single win I had for the trip.

If it was not for getting tilted at the bill exchange for all the ones it gave me on top of what was already in my wallet I would have never played that last machine. I would have never pushed the button at the exact millisecond for that win. I’ve had many trips like this where the last machine held to make up for the beating I took on the trip.

Just one win was also enough to save the entire trip from being a decent loss. I ended up walking away with it just being the cost of dinner. Which is a dam good time if you ask me. While not my biggest win ever and the overall the trip being rather mediocre for how few bonus I got. I still had a blast and quite a few laughs along the way.

Photos were taken and content was written by @Enjar.