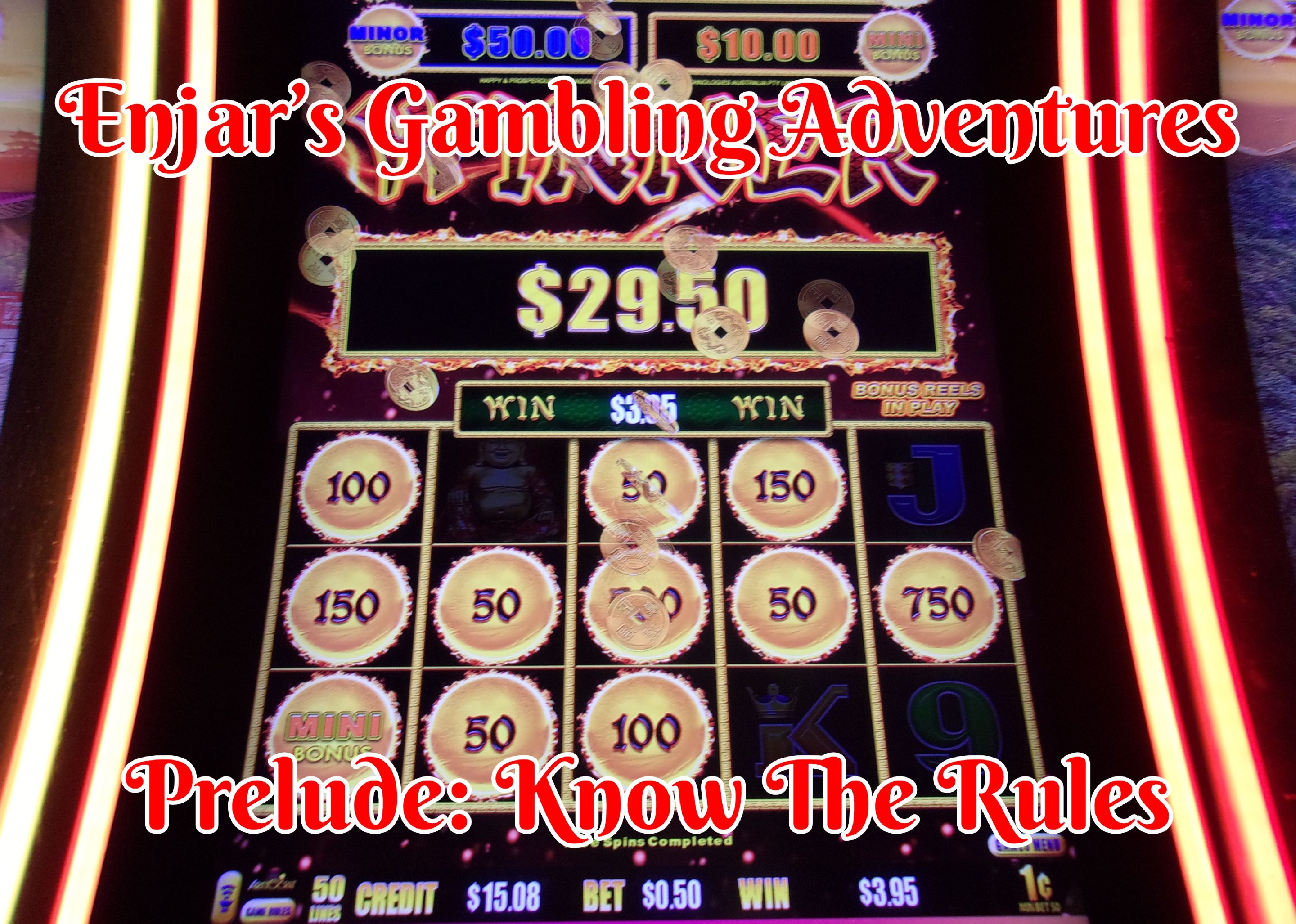 It’s almost like I’m cheating the system. I’m what you would call an advantage player. I’m not one of those straight as a board advantage player that stalks slots machines like a psychopath. I am there after all to blow off some steam and have fun. Sitting around watching a single machine for sometimes hours on end before playing anything is boring so I don't do that. Some advantage players cause such a scene they get banned and for good reason.

There are always a couple of hard rules I follow when entering the Thunderdome of broken dreams and drunkenness. The casino wins because degenerates will be degenerates. You do need some self-control otherwise you fall into a gambler’s fallacy where bad actions on occasion reward in positive reinforcement.

This is by no means a guide. This is just how I approach gambling and dealing with casinos. I am by no means a large fish. I’m quite the low roller that tends to play in the range of 50 cents to $2.

I set a hard limit on what I’m bringing. Many factors play into this. I am a bit of a distance to the nearest casino. I want to bring enough that unless I have a really bad run I get to enjoy being there for most of the day.

I only bring what I’m willing to and can afford to lose. Gambling is not a way to make money in the long run. There are ways to take and take advantage of certain situations that if things go well they could pay out nicely. Going to an ATM though and paying insane transaction fees is just stupid and I’ll see people doing that all night long. They did not bring enough or should have left after hitting their limit. Some people never learn.

I don’t take lines of credit of any kind just to go gambling. How insane do you have to do such a thing? Sadly casinos more and more these days want in on the action of lines of credit. They want you to just stick your player's card in, lose lots of money, and not realize since you are not physically holding the cash in your hand the pain of the loss or going over your limit.

Unlike a lot of people at a casino, I keep a running total of my bankroll in my mind. How much money I have played into how or what I play. There are a strategy to my madness and more times than not it’s my brank roll size in proportion to the risk I’m taking.

I have actual limits in how much I’m willing to put into different machines. Part of this is breaking down bills and only putting into a single machine my limit for it. Far too many put large tickets or amounts that they tell themselves when they have X left they will cash out. Sadly, most lack that kind of control and get roped back in until their balance is zero.

I avoid chasing losses. The funny thing about being an advantage player is the gambler’s fallacy itself. You could be thinking you see patterns that are simply over the long run, not a thing. So people will think because x, y, or z is occurring that it must be hit soon. I have seen people empty their entire wallet including all cash on hand, vouchers, and even go get a line of credit just to not get the bonus or one that pays $2.

Outside of some swearing and tossing up middle fingers for fun. I avoid getting physical with the machines. Far too many are bashing the daylights out of anger on buttons or punching the slot screen itself. If you think the casino is going to be fine with someone just breaking things and getting away with it think again. They will charge you a kidney for repairs and loss of income.

Casinos can be a great social place. While many portray them as these lonely sad places I see them as the opposite. While I am an introvert and don’t go out of my way to strike up conversations with strangers. It’s increasable just how many slot neighbors want to chat. I also don’t go alone so I’m usually chatting with the person I’ve come with.

Be happy for your slot neighbor’s wins and they tend to share the same energy back onto you when you win. Some of the funnest times I’ve had in a casino are being happy that other people’s wins. I’ve witnessed some crazy things while gambling. Everything from someone next to me winning a $30k jackpot to someone lose their mind when the $5 they put in got nothing. No one likes a bitter nasty neighbor that starts scratching because you won and you must have stolen it from them as they lost a lot of money playing that game.

You will see some crazy deranged lunatics in a casino that are full-blown mental. It’s best just to give those kinds of people a wide birth. While I wish the casino put more effort into dealing with people with issues as far as gambling or other addictions is considered. That is like telling a company the people they make the most money off should no longer be their customers. If and when those kinds of people are willing to get help there are numbers and other resources posted everywhere in the casino for them to reach out for help. End of the day it’s none of your business as it is none of there's about you as well.

More times than not even when I’m playing a slot for the first time. It is not the first time I’ve seen it. I like to have some information about it beforehand. Many slot machines depending on the type of bonus had you as the player make a choice. Some choices are better than others. Some choices also have zero impact on the game they just want to make you feel like they did. I’m also not one looking to take the lowest or riskiest option either if given the choice. There can be that sweet middle ground due to many factors that people often overlook that make certain options better than others.

Know when to walk way. I’ve seen far too many times someone get a decent win and toss it all back in. Sure you could go lose the money you put into the next machine. However, some never walk away until they are forced to leave the casino as they are out of money. Sometimes it’s time to take a break or even leave while you are up by a nice amount. Leaving with the casinos money is quite fun. I make it a habit to use their money when I return.

End of the day despite what a lot of crazy things people say or do. It’s all about when the button was pushed. Unless of course, a slot machine has to pay by a certain amount or a feature was left behind that the next spin gets guaranteed. Those are always fun to find, however, many know about such opportunities. Some only walk around the floor looking for such things and nothing else.

It’s hard to believe I’ve been gambling in casinos since 2018. Outside of two posts on Hive I rarely talk about it. I’ve decided I have enough adventures and stories to tell that it makes for some fun posts.

Usually, more times than not I don’t take photos or there are only a few. I do respect other people’s privacy when it comes to that sort of thing and casinos can be quite a busy place even in the dead of night. Sometimes I’ll have a photo(s) from a particular adventure other times I won’t.

While some posts might be multi-part stories others won’t. None of these will be in the correct timeline from my first casino visits to the latest. I also don’t have a schedule I’ll be posting on these kinds of posts more than likely will be coming in batches from time to time. Some I have more vivid memories while others I’ll be filling in the gaps when needed with what information I have.

Gambling is not a way to make money. I find it fun even more so when I beat the house. Even when I don’t I had a good time. While my play is rather restrictive and in a certain way I go about things. This is by no means a guide on how to beat the casino. It’s simply me sharing my stories along with my insanity that makes them.

Photo and content by @Enjar. Enjar’s Gambling Adventures is based on my personal experiences.