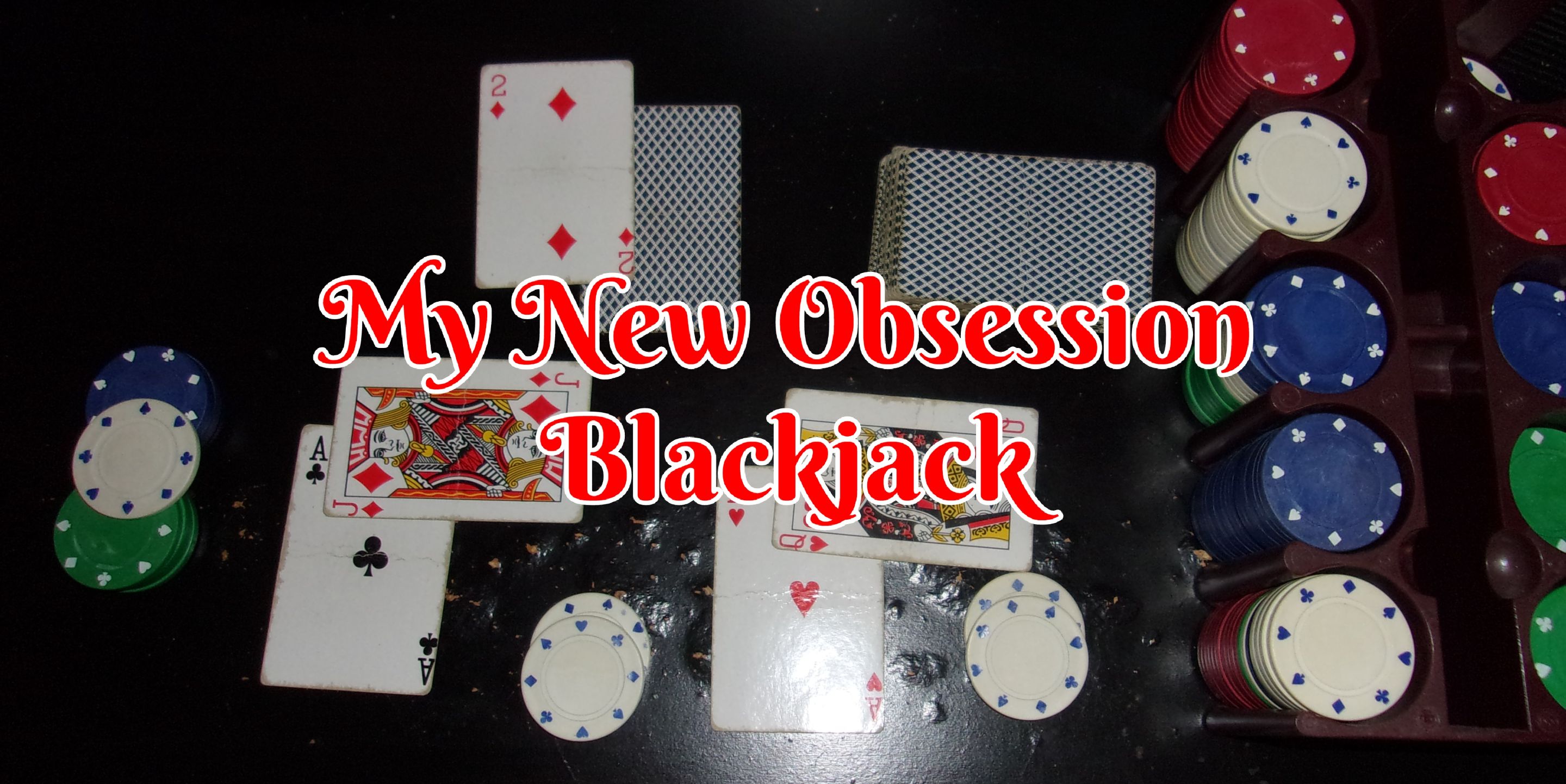 Sometimes it can be quite fun to deep dive into something and see how complex the currents of that newfound interest can be. I have played a little bit of blackjack with friends in the past for fun. It was nothing more than counting to 21 and that was it. I have even seen some movies in the past about it and always wondered more about playing it.

Since my brain needed a bit of a shift onto something different to give it a break from problem-solving some stuff I’m stuck on. It seemed like becoming somewhat obsessed with blackjack would give my brain the break it needed. I’m not one to sit around idle so it was this or something else.

I have seen in my many trips to a casino the many blackjack tables that are set up all over the place. I have never been one to sit down and play it. This is however now a bit of a goal I have set myself. First, though I need to make sure I understand at least the fundamentals.

While it is a bit crazy some people out there make a living playing blackjack. Where they go around the country or world taking the casinos for hundreds of thousands if not millions of dollars in winnings. By playing the perfect game. I know that is not a reality for the average person.

Besides I’m not looking to get backed off from my local casino. I don’t want to be banned if they take things that far. There are not that many options either around here and I do enjoy going there for dining and playing slots to blow off some steam.

What I do want to do however is increase my advantage so the house has something like a half a percent edge over me instead of a couple of percent. Blackjack is one of those games where the casinos make a killing because you as a player can play it poorly. While there is some luck involved it’s no like slots at all. A bad play by you is free money for the casino.

That is where something called Basic Strategy comes into play. I did not know much about it at all before getting into things. Outside of a couple of movies where I’ve seen the person playing double down or split cards I did not know when and if you should be doing such plays.

Thankfully Basic Strategy has mathematically worked out the best plays to make against the dealer in hopes of increase your chance of winning or migrating your losses. There are a bunch of rules in how to play against a variety of different situations.

While a lot of these plays make sense when deploying them while I practice. Some still hit me in the gut every time I make them. Those tend to be situations where I need to hit with a hard total of 16 against the dealers 7 or higher.

The chance of busting is why it’s a bit of a gut check. I have however seen with my own eyes after playing out many thousands of hands that mathematically overtime hitting a 16 even when it feels like the wrong play to make is the best long-term outcome even though it sucks to bust a lot in the short term.

After learning a bit about blackjack in general there were some trends I was not too happy to see that I needed to do some research on for my local casino. The player hitting blackjack and getting paid 3 to 2 payout is quite important in having any chance against the house. Many casinos know this and only offer 6 to 5. This sounds amazing at first but it’s a lower payout than 3 to 2.

Since I am a bit away from my local casino and going down there just to scope out the tables and do nothing else is a bit of a waste of time. Thankfully I can find photos and videos online of people playing there. Even at the lower wage tables, 3 to 2 is being paid. They also appear to be playing on 6 or 8 deck shoes which I’m not quite sure what it is. Which is great.

There are also many different rules if you would believe it or not when it comes to blackjack. One of them is an option that only a small amount of casinos offer and that is called surrender. That is where you can fold certain kinds of hands for only a 50% loss.

The issue is trying to determine if the casino I go to offers this option. Their online website lacks giving any actual rules for the game other than really basic information. Watching videos of people playing online there I have rarely seen it and those players seem to be quite bad when they don’t.

There was one instance where a player was using the surrender option. There is however a catch. That person was playing at a high-limit table. When it comes to high-limit casinos tend to offer more of a fair game than at your lower tables. Sometimes such things are also negotiated by the player if they are a high roller.

It is rather crazy the number of things casinos are willing to do to lure in the whales for gambling. Blackjack is no exception to this rule and there are some crazy stories out there of players taking casinos for millions by negotiating small rule changes in the game. One interesting blackjack player to look into is called Donald Johnson who took Atlantic City casinos for $15 million.

I am just a guppy to the casino. So I’m not expecting any kind of special treatment. I also don’t think at lower tables at the casino I’ll be going to surrendering is permitted. It just appears to be for the private high roller suit that some people are invited to play in. Granted I’ll be asking when I do make my trip.

There are also different rulesets for the dealer telling them when to hit or stand depending on the table. Some places will say things like “dealer must stand on all 17’s” while others if the dealer is holding what is called a soft 17 (ace and a ten-value card) they hit again. While it has some impact on how you play certain hands at my level it has a tiny amount of impact and thus information is power.

Blackjack also has what appears to be sucker bets. Bets that have a higher casino edge than the normal game or options that most should not be taking. Most of the time these are in the form of side bets where you have to do something like match the card the dealer has to win.

While there are some side bets in blackjack that either has a really low house edge or players have worked out how to beat. Most casinos including the one I’m going to tend to say away from anything not in their favor. So I won’t be making any side bets.

There is also the option to take insurance if the dealer has an ace face up trying to hedge against them holding a blackjack. There seem to be only two kinds of people who take it and that are suckers and card counters. Since I’m not a card counter I’d fall under the sucker portion of that and will not be taking insurance. While it will suck when the dealer gets blackjack I’d rather not add to my losses quicker by being wrong more times than not by taking it.

The biggest issue I see is the lack of lower betting tables. With the state the world is in and casinos looking to make it worth their time. Many low tables are no longer offered. I would have personally preferred to play at a $5 a table min or lower. I’m at least lucky there still should be $10 tables that I can play on. Most however are $25 and up for the place I’m going.

That however presents quite the issue when it comes to bankroll. I don’t want to risk a lot for my first time playing live at a casino. I’m also still going mostly to play slots so most of my bankroll will be set aside for that.

At $10 a hand my risk of ruin from what I can gather online is going to be quite high. Thankfully sites like Wizard of Odds have tables breaking down the risk of ruin. So I’ll know what I’m getting myself into. Which if I understand right I’ll be at a ~35% of losing it all with my trial run.

With quite a lot of things to take into consideration, I set up my own home little practice area as you have seen in the cover photo for this post. While I was never really big into card games I happened to have a set of poker chips. I also had a deck of cards laying around.

While it was tempting to get 8 fresh decks of cards since the current one I have has been played till the point now it’s hard to shuffle. I don’t have anything to hold the cards in like a shoe you see at the casinos. That also seems a bit extreme for the level of play I’m looking to enjoy to be doing that kind of home training.

Long term if I end up enjoying playing blackjack the next time I go to the casino I might look into getting more into it. That will entirely depend on that trip on how the tables are set up as the casino since some restrictions are still in place due to the current pandemic. So that might result in me not giving a try my next trip. There is a lot more than just Basic Strategy to learn that however tends to move you closer to the casino deciding they no longer want your kind of play.

For now, I know my Basic Strategy is still not perfect so I’ll keep practicing a little bit each day. I knew I had some gambler’s fallacy to deal with. I did not realize I had some regarding blackjack that I need to work through. I seem to be struggling a little bit for a couple of doubling or splitting opportunities. Most of them I do however have down.

The photo was taken and the content was written by @Enjar.