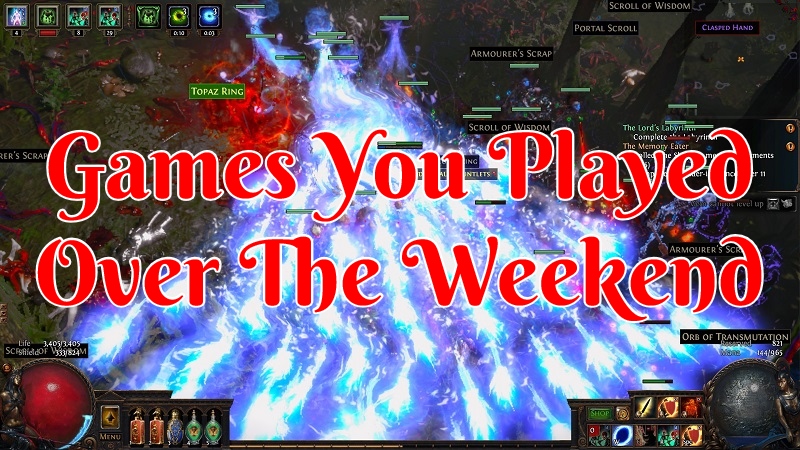 It should come off no shock I enjoyed lots of Path of Exile over my weekend. Since I have a very busy week I’m going keep this one shorter and just provide updates on my Delve and Atlas in the game. I did some other things as well in the game over the weekend. I plan on having content out about those things at some point so it won’t be included.

Have a wonderful week and feel free to share about any game(s) you played over the weekend. There are so many great games and amazing content creators out there. Yet, often times not a lot of engagement going on in many different gaming tags. Get outside of your own blog and meet some new people!

It has expanded a fair bit since last week. I’ve made it to depth 120 and level 75 monsters. The biggest slow up is the cost per node to keep going deeper and deeper. Just a short path can be almost 300 Sulphite now and the longer ones over 700. I might choose to just start moving sideways looking for loot. Even going back up the other side. Kinds of like making tunnels in a game to find ores expect I’m looking for currency, and different sites to run for drops. This would help control costs and still keep me finding perhaps valuable loot. I think it would also make the map just look even more epic being fuller filled out!

While I can do higher maps and they do yield more Sulphite you can go hours without finding any and then get 1 to 3 nodes in a single map that yield 700 to 900 each. Which does not go far by the numbers even more so when you need to travel a distance to get to somewhere good.

The good news is over the weekend I found out in the betrayal league an item is dropping that guarantees you will find Sulphite and at a higher rate. The bad news is at its price point 16 Chaos for the cheaper once it’s not very economical. My knowledge of Delve is not deep enough to make the kind of returns required to even break even let alone make a profit at those prices. There is a higher cost effect one that yields 150% for 30 Chaos. Still, that just not quite enough. Perhaps when I get into higher level maps and have a better understanding of Delve then I do it will make more sense. Otherwise at end of the league if I have a bunch of currency to burn I might just go for it and see how far I can make it. 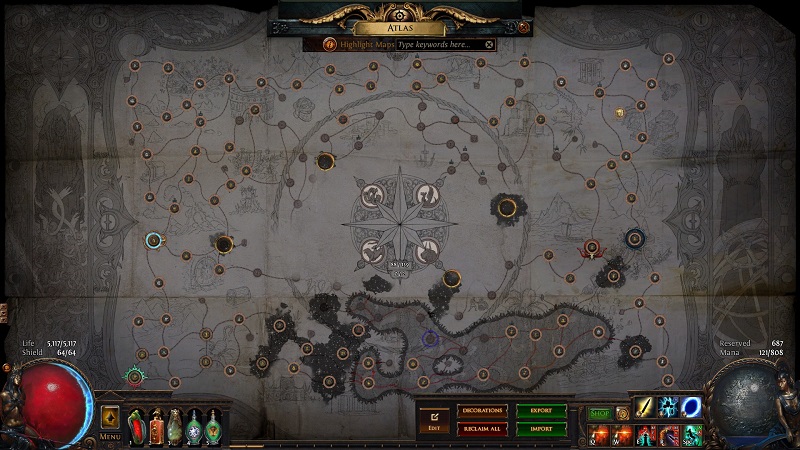 I’ve had a massive explosion of growth on my atlas over last week and into the weekend. I spent a lot of time trying to find map sellers who were willing to deal in non-bulk orders and started buying up missing maps to complete the bonus on.

Higher tier map so far complete was Park in tier 11. I started to have some slight issues on that map with my current build. Not sure how far I’ll be able to push on my main a dullest champion. He did make it to level 90. I think that is where I’m going end trying level up. Each death now loses too much XP!

I have collected or attempted zero maps in the tier: 12 to 16. I’m also missing most of the unique maps as well. So while I’m getting closer and closer to the center I still got a long ways to go.

Sometimes I have to contact 15 to 20 sellers just to find one to respond for a single map. Most either ignore buy requests unless they are not busy or are only looking for bulk sales. I even tried to buy a bunch of maps of one guy with no reply back. It’s a shame they don’t just toggle there sales tabs as public off when they are not looking to sell maps.

Because of that the issue further compounds itself. People just spam all at once everyone and accepts the first person to send them a party invite for the trade. I noticed that when trying to sell some maps myself. I at least try and wait for thirty seconds before content the next person. That sadly takes forever to get a single map. While I have been trying to get my own to drop map stainability at higher levels Is hard. Leveling up an alt is at least helping in getting a couple new maps I was missing.

I hope you found a fun game to play over the weekend. Have a great week!

Screenshots were taken and content written by @enjar. Screenshots are from the game Path of Exile.