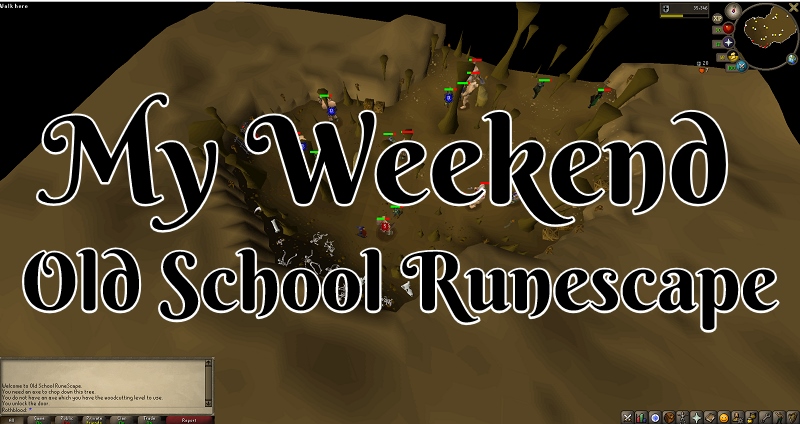 Over the past several weeks I’ve been running a non-contest version of this that only ask for people to comment instead of having to make an entire post for some fun. After this contest is over I might consider just for the engagement element to make it a weekly thing. Where I share what I was up to and encourage others to do the same. After all, there are quite a few amazing content creators in the different gaming tags and it can be hard for people to find someone they might find interesting. Engagement is a simple way to try and find the content you might enjoy and that can often be rather lacking in the fast void of the gaming tag.

I am in fact an f2p noob when it comes to OSRS (Old School RuneScape) having only started the other week. As s such grinding has been the name and wanting to earn a bond for 14 days of membership is the goal. One of the first things I wanted to work on was combat. This game has quite a different combat system then I'm used to dealing with.

If we look at skills for melee there would be three different wants I ended up needing to level up. From my understanding, they work as follows: an attack that unlocks higher tier weapons, the strength that increases my max damage per hit, and a defense that reduce how often I get hit. Each one has to be leveled one at a time. Unlike in other games where say my defense would level up as I took damage that is not the case in this game. I have to select that to be trained when damaging creatures and that would be the only one out of the three to receive XP. 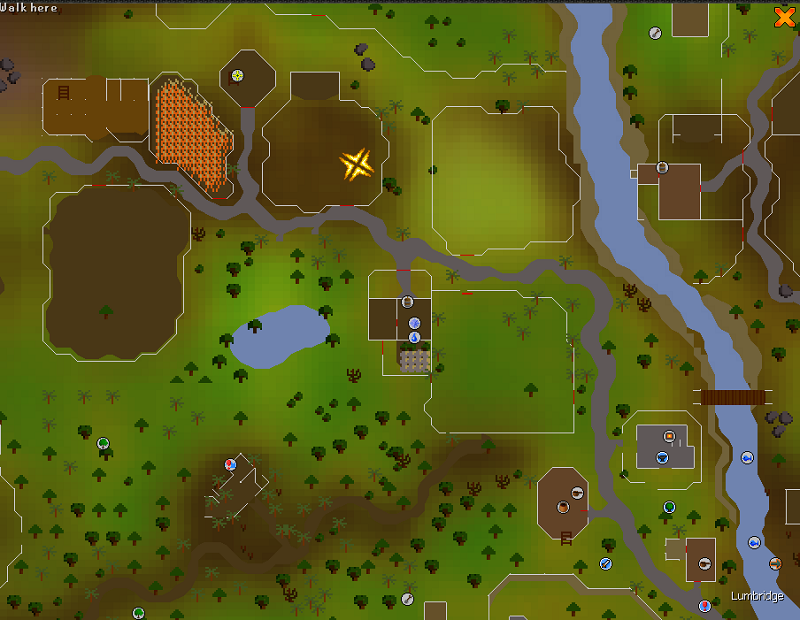 While wandering around the starting area of Lumbridge I noticed there were a few different things in the town to attack. Goblins and Cows seem to be a little too high for my level 1 skills so I forced on chicken till I was level 5 in attack, strength, and defense.

While the pen I found them in was quite busy with other players they had quite a high respawn rate so that did not seem to be an issue. I ended up cutting down some trees so I could make a fire and cook up the chicken. The feathers stacked with each other so I just picked up all that I could find even from other players. The bones, on the other hand, did not stack and took up an entire inventory slot just like the chicken did. I ended up making quite a few runs to the bank. Not wanting to miss out on anything.

I was shocked later on to find out these things could be sold for enough in-game money to buy some needed iron upgrades. So I picked up a steel scimitar and gear to make things go faster. 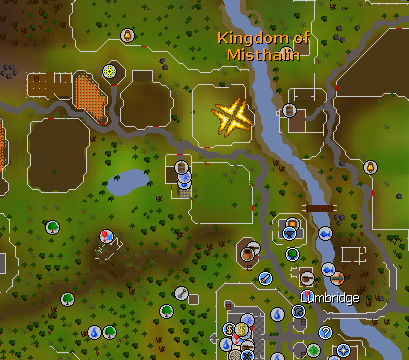 Now I was really stepping up in the world. Right next to the chickens was a pen of cows which I found to be rather a convent and so my next target. They were also just a tad closer to the bank of which I got used to spamming going up two flights of stairs and dumping everything I looted into my bank. Thankfully these items stacked when I put them in the bank. Otherwise, I would just not have the space for all the phat loot I was getting! 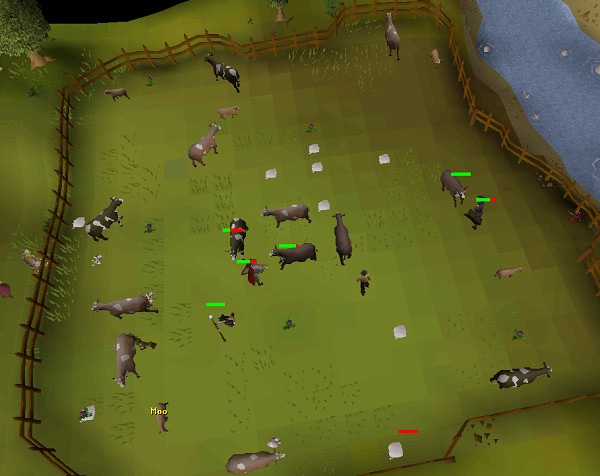 I’m not sure what it is with bones in this game or how they even have any value remaining since everything so far seems to drop them. I, however, noticed everyone seem quite keen on getting the cowhide. Outside of people picking up the meat to cook to heal with. The hide was something some players just went around picking up instead of grinding levels. Not wanting to miss out I focused mainly on that since my own inventory does not hold much.

I ground at this lotion till I was level 15 attack, strength, and defense. After that, I grew bored with the cows and I wanted something with higher health levels. Since I only gain XP from doing damage this just seemed like the right thing to do.

Then it was time for another trip to the Grand Exchange that is located to the west of Varrock. I sold off my goods and picked up a weapon and gear I could not use till level 20 called Mithril. I wanted to avoid making the long trip back up here again until I had something to show for it.

Thankfully by this time I noticed I had a teleport to Lumbridge and so I did not run back like the noob I was before! I explored the area for a while and while it was tempting to go back to cows I was rather sick of grinding them so I tried a few different spots

I found a random spot with a bunch of goblins at first. It was just next to the castle and not too far from banking either. They were rather easy to take down and I was not at all impressed with their loot. Which made me a little sad since it was so close to the bank! There Even was a backdoor into the castle. Which would have made it quite convenient if I had liked the loot.

They dropped 5 coins on death and quite frankly I’ve been selling stuff for more than that. As such I just left the money on the ground. Which as a broke noob was rather a strange thing to do but hey I got get my coins and XP per hour up higher if I ever want to see more of this game! 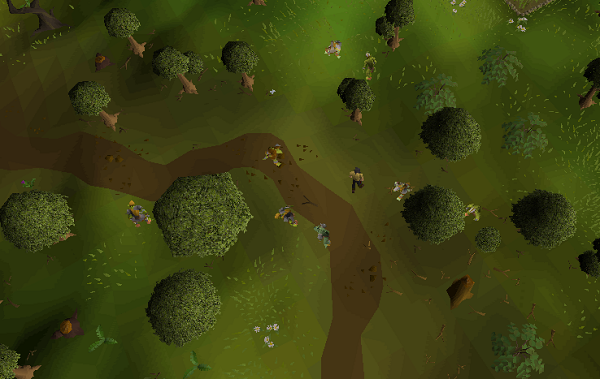 The next area I wander into was southwest of Lumbridge and it had two different kinds of monsters to attack. The rats where quite easy and the frogs had more health but required a lot more healing. So I ended up just killing enough rats to fill my inventory of raw rat meat to cook up and then hunt the harder frogs. Who only dropped only bones from what I could tell. 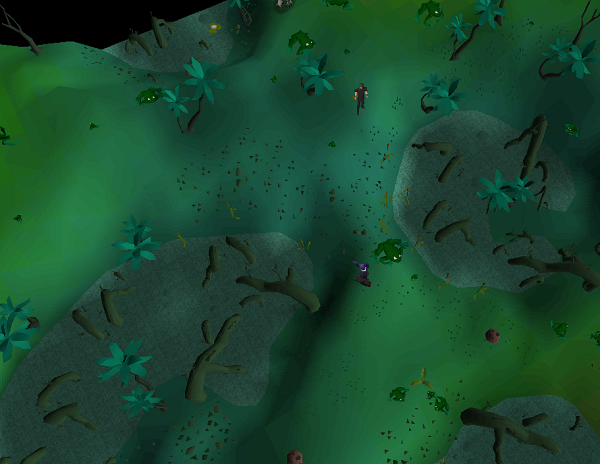 On top of that, the frogs came in several different levels. This made this area last for quite some time as I could not only rotate to keep from getting bored of hunting the same thing. There were also options I could take depending if I had enough to heal from the cooked meat or gather up some more. It was also nice not having to venture out of the area to find trees to cut down to make a fire which was the case for chickens and cows. This made me rather self-sufficient in this area. I ended up not banking anymore and just burying the bones I got for XP in another skill.

I ended up staying in this area to level 30 when I unlocked Adamant weapons and gear. While I had found a place called Barbarian Village just west of Varrock. It was not worth trying fight twice as many players as there were barbarians to hunt there. After that, it just felt like I should try and find a new area since I now was more powerful. Besides, I did not want any frog guts and swamp gas on my new shiny gear-- joking! 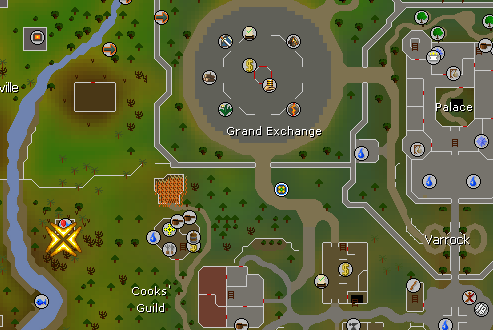 Since this game is quite old and I really was stumped to where to go next. I thought why not ask around. After all, I do not want to grind my days away in such a low-level area anymore. To my surprise, I heard about a much better area that was rather close to the Grand Exchange as well!

All that was required was a brass key which I bought off the grand exchange for a couple hundred coins. Then I just had to enter a shack and go down some stairs into a dungeon area. 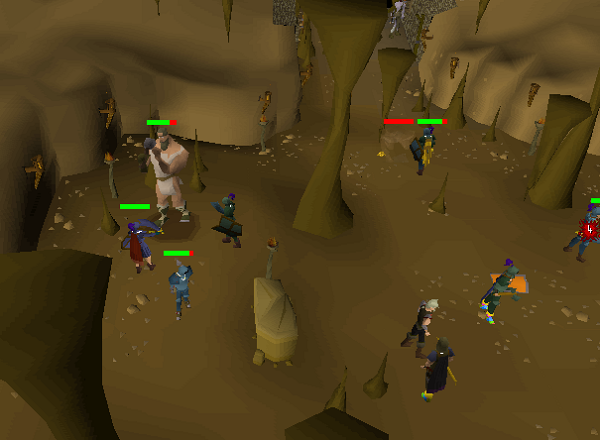 It turns out every single person knows about hill giants as they were always heavily camp even late into low populations hours. I learned it was better to world switch instead of trying to fight it out with another over a single spawn. I could find a spot and try and claim it for a while before getting pushed out or needing to make a bank run to unload my goods. As long as I was not trying to do these during peak hours it was not too bad to find a spot. I just went on questing or things like crafting when it was way too overcrowded. They had quite the amount of health and did not hit back to hard either. So I can understand why everyone seemed to be here.

The loot was also decent once you learned what to pick up. As I kept finding many of these drops.

My focus for looting while down there where: big bones, limpwurt root, and the giant keys. I would often time come back up to the surface with around 10k coins worth of loot. This up to this point for me is quite a lot. The keys while not tradable on the grand exchange unlocks a boss area that I’m nowhere near ready for. Many of the players down there seem to be grinding for that key.

To cut down on healing costs and time cooked meat was no longer good enough for the hill giants. While I tried a few different things from crabs to anchovy pizza they just cost too much from my point of view. Instead, I used jugs of wine which turned out are quite bad for melee as you miss a lot more often. They were also only 4 coins each so I could buy hundreds and not care about taking longer to take out a hill giant. I’m sure there are much better and cheaper foods then I know for healing then pizza. I’m still a noob and hope to find out a better alternative. 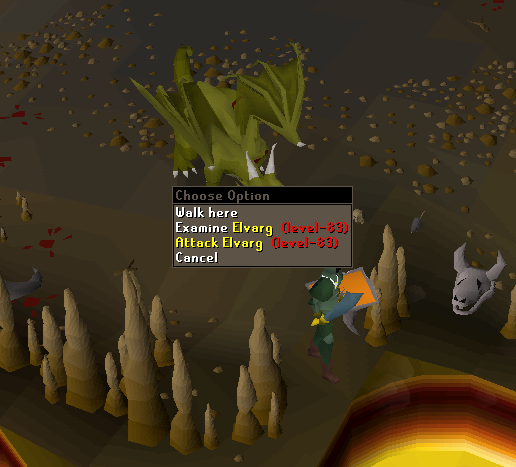 Another way to earn some XP that I took advantage of while grinding monster was going on questing. The biggest one that I’m aware of for an f2p is called Dragon Slayer quest. While I won’t bore you with exact details of all the parts it took to get to the dragon named Elvarg. I will say it was an interesting quest to go on. ended up fixing up a boat and even having to find a caption for that boat. Which had a fair amount of cost but thankfully I had some money to spend.

I ended up attempting the dragon three times. The first time I got owned and almost died. I was trying to do it around level 20 if I recall and that was quite crazy. I ended up going back after level 30 and ran out of food on my next attempt.

While there is a spot you can stand to hit the dragon then go back and wait and hit him to stop showing his health bar and hit again. I found a few times I would get him out of position where he would start hitting me again regardless with his fire attack. So after getting him down to around 50% health, I started to eat all the cooked crabs I had brought with me and just face tanked him. 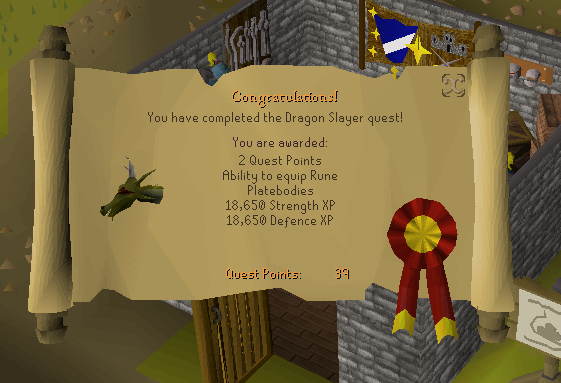 Thankfully it all worked out in the end. I gained a nice chunk of XP and I can now wear Rune armor once I hit level 40 defense. After that, I went back to the Hill Giants and started to work on some magic. I ended up getting to 40 attacks, 40 strength, 39.4 defenses, and 35 magic.

Screenshots were taken and content written by @enjar. Screenshots are from a game called Old School RuneScape.