It was time to go deeper much deeper into Delve. I hatched up a plan that I would buy Sulphite Scarabs to run within maps. The Scarabs would spawn in Niko and Sulphite veins to farm on the maps. I then would go run Delve earning more than enough to cover the Scarab costs and get more maps. It would be quite a little never-ending cycle. 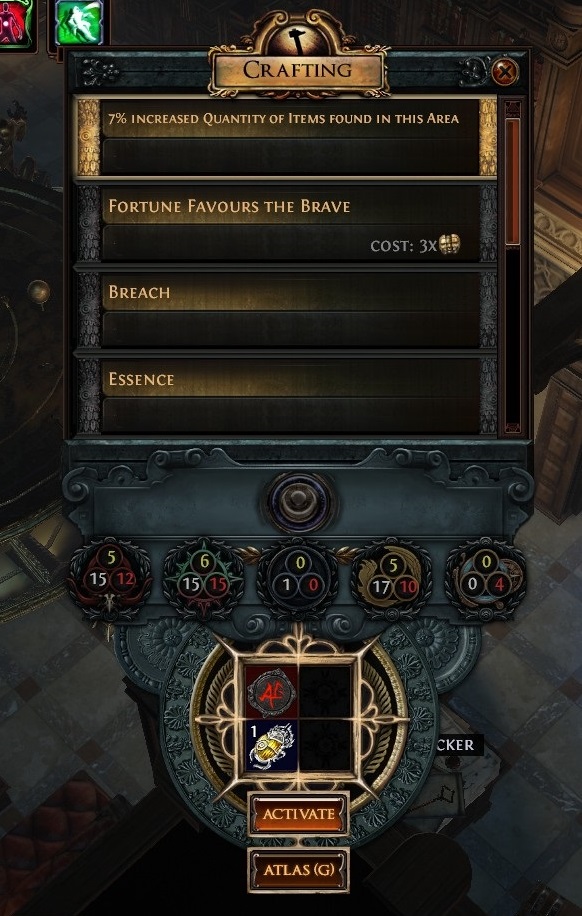 I would be running every map forward with a Sulphite Scarab included with it in the map device. There seem to be quite a few scarabs on the market going for 1 to 4 Chaos each depending on the rarity. Scarabs seem to be cheap and easy to buy in this league.

While I have no shortage of lower red maps. I would not mind picking up a bunch more maps in general. I still have a few I’m missing. Running a bunch of reds could give me a decent chance at getting maps I’ve yet to run for some of my atlas bonus. While also grinding for Sulphite for my Delve runs. This could have been something I was doing a lot earlier. I just did not feel a need for it. For the most part, I was running my daily for Sulphite and any other random Niko Atlas missions I was picking up from killing end of map bosses. I was getting a couple a day. It was just never enough to get all the Sulphite I wanted. I ended up lucking out quite a few times on my latest journey into Delve. I had some amazing drops that I was not expecting. I also found some cities. Overall, it was a packed filled night of excitement and taking risks to get a screenshot without getting killed and losing what was left behind.

In Delve there are a lot of chances to pick up a bunch of maps. You could get a map node, a city, or just have a random drop. I was deep enough now in the mine that I could get tier 16 maps. The deeper the better the loot should be getting overtime. While randomly clearing a node on my way to deeper depths with no real destination in mind I had my second Exalt of this league drop. I recall the days where I’ve played leagues in the past that if I got just one Exalt I was considering myself lucky.

For me, that would have been more than enough to have made it a great night. It gave me enough in-game currency again to start keeping my eye out for some needed upgrades. Throughout the night I would try and snipe for some new gear that was priced a lot cheaper than other pieces as the result of this find since I now could afford to do so.

Shortly after I had spent what Sulphite I had at the time. I went and bought more Sulphite Scarabs from players and did several more map runs. After that, it was back down into Delve going deeper.

That is when the second exciting moment happened for the night. I had found another city. The last city I found took forever. If they end up becoming more of a frequent find the deeper I go things could become quite profitable and fun. The city however had just two chambers to explore. I have yet to find a massive underground city that would take a few trips of farming Sulphite to raid for everything it was worth. I have no idea how large they can get but I keep hoping one of these days I’ll be shocked.

Despite its size, it still ended up severing the main purpose I wanted to find them. I ended up looting six red maps out of them in total among some lower maps. Three of them were Tier 15 or 16 and I was rather thrilled about it.

I even looted a two-stone hunter ring which I thought was the icing on the cake. It was not anything insane but perhaps I’ll get 50 or so Chaos for it. That alone would cover quite a few trips into Delve. That however was not the only thing I found that evening. It could not have been more than an hour since my first Exalted drop of the evening. Out of reaction and not wanting to get killed before looting it I picked it up off the ground. Once things were a bit calmer I dropped it back onto the ground around the chest I looted it out of. It felt like quite the risky move but I’m a gluten for screenshots.

Not even five minutes later my internet connection ends up dropping. Which kicked me from the game. I’m thankful it did not happen when I went to drop my second Exalt for the evening on the ground for a screenshot. Perhaps next time I won’t take the risk.

Thankfully I also was not in Delve or a chamber. I would have been missed out on anything I had not cleared yet if I had. I was running a map at the time to get more Sulphites to keep going deeper. 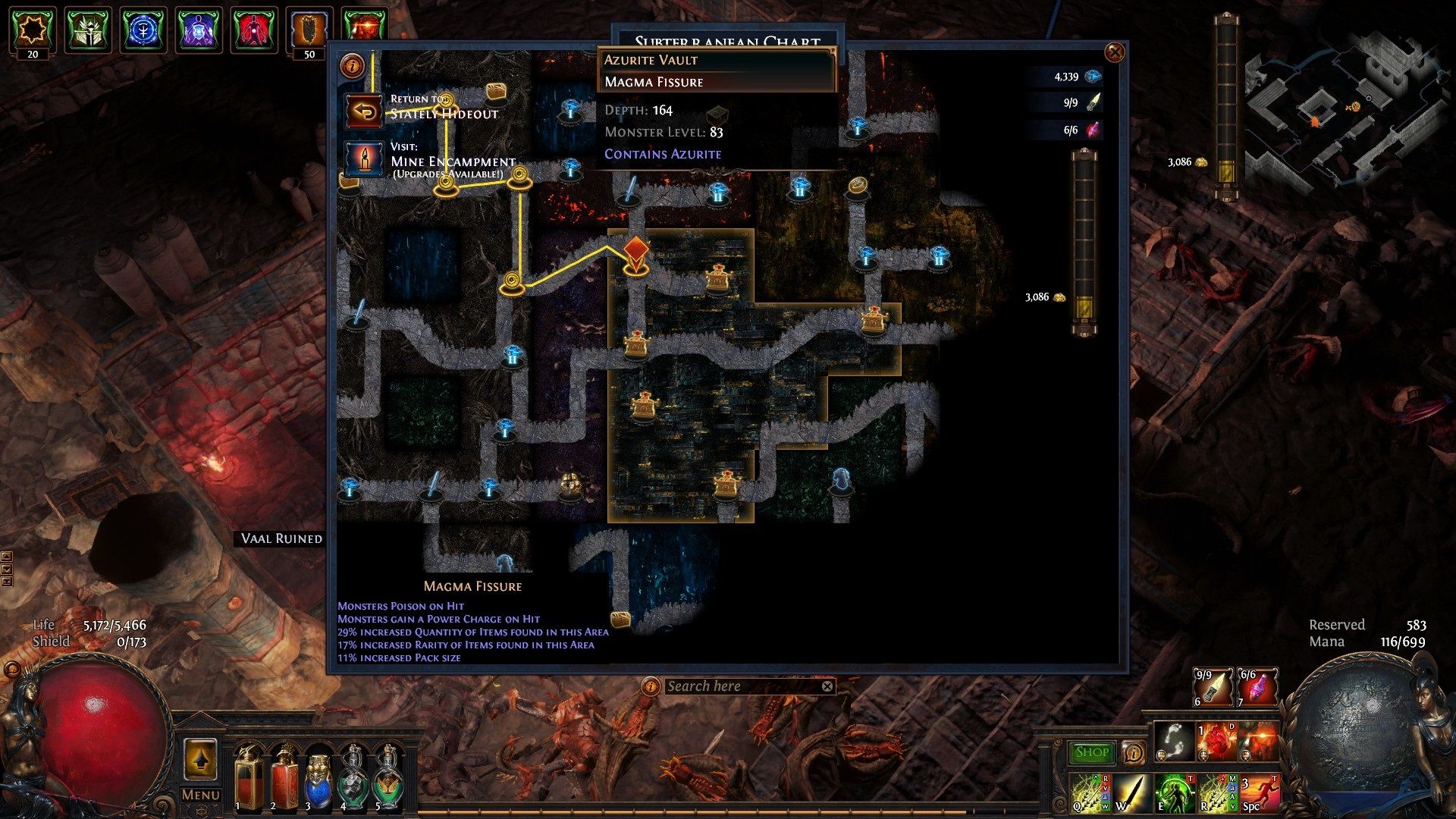 I then went a fair amount deeper into Delve when I found my biggest city so far this league. It had 6 chambers including a hidden one that I had to break down a wall to get a connection to. They were a little spread out so I ended up having to go farm more Sulphite to finish all of them. While nothing insane dropped after clearing all of them out. I did get over ten Chaos that more than covered my costs. There were also a lot of red maps many in Tier 14 to 16 range. The great thing about that is I’m only at 20 of 118 for my Awakening Atlas bonus. With many of the maps that dropped not having the bonus completed yet.

Once that was all done I called it an evening for any more excitement. I was quite exhausted from looting two Exalts and finding two cities all within several hours of each other. I did spend a little time shorting, listing items for sale, and looking for upgrades. 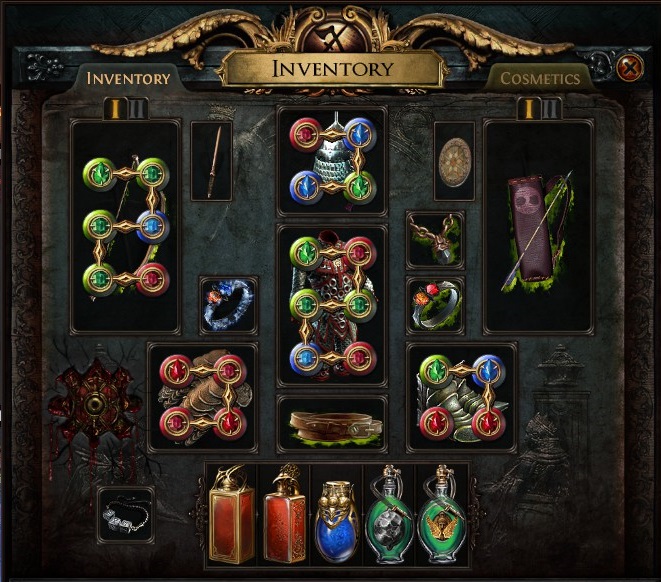 This belt I ended up picking up for next to nothing. I was somewhat shocked when I reworked my search terms for a new belt and it was just sitting there. At the time it did not have the cold and lighting resistance crafted onto it. Everything else on the market wanted several exalts. I snatched it up quickly adding hundreds of life to my character.

I then was on a hunt for a new chest piece and some gloves. Gloves people just want insane prices for the stats I want. So I’m still having no luck on that end. I might try to work out how to craft want I need. It’s kind of a hard piece to fit since I gave up some resistance and other stats for other upgrades. 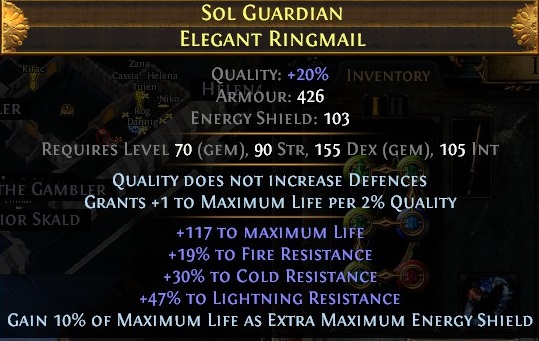 I did however find this decent chest piece. It’s nothing insane. It however is going to increase my survivability by a decent amount. The downside was the amount of intelligence is required to wear. I ended up removing a 5% passive life node for now till I level up for another passive point.

In return, I picked up around 700 energy shields. Along with picking up a different skill in my passive tree that gives me several hundred energy every two seconds for getting hit.

I’m at the point now where I’m using my life flasks a lot less than I used to. I’m considering making a switch and dropping one of them. While I could get something that will add more damage to me I’m tempted to get a second mana flask. I might have to do some testing and see what ends up being better for me. What an insane evening it was. I’ve had some crazy times before in Path of Exiles and this has to be in my top ten. I’m really glad I decided I wanted to go dive deeper into Delve. I have also not cleared the darkness yet for any treasure they could be hiding for the most part. That will be for another day.