Into the darkness, I went in search of unfound and lost treasures. While I had explored a small section of it and broken open any fractured walls that were close to my Crawler as I was diving deeper and deep into the madness of Delve. For the most part, it was unsearched.

Before I was to depart there were a couple of things I needed to wrap up first. I knew while exploring the darkness there would not be any experience gains and a few deaths along the way. I wanted to make sure I had just hit a new level and made it to level 92. I also wanted to make sure I had a decent amount of Azurite to buy flares for light and dynamite to break down walls.

While I’m sure many things have changed slightly over the years regarding Delve I have written about it in the past. My mind might be a little hazy on the current rulesets for trying to find fractured walls that lead to the treasure. I needed around 2 Exalts for an upgrade I’ve been keeping my eye on for a while. Since I had so much darkness to explore around the path I carved out in Delve it felt like this could get me a decent way to that goal. I also find it quite fun.

I prefer to save large chunks of darkness to search all at once to make it easier in mass selling and unloading what I find. While prices will surely be a bit lower than I could have gotten a few days ago. It’s not worth my time trying to sell 30 items each worth 1 Chaos one at a time. I’d rather just collect a bunch; unless I get lucky with something being worth a fair bit more and sell that right away. Running this much at once can be a bit daunting and requires a little planning. It’s easy to get turned around, get killed, and forget exactly where you were on the map. As such, I took a bunch of screenshots of areas I was going to go along and drew a red line as I went indicating I had already checked that area. The yellow lines are already laid down cables from my crawler from going through those areas in prior days reaching different nodes.

Along the way, I would run into many dead ends just about everywhere in the darkness netting me nothing found. You can only last so long without light in Delve before the damage kills you. Thankfully I can take some damage and I found it rather natural to move in and out of the darkness for the duration I was down there. 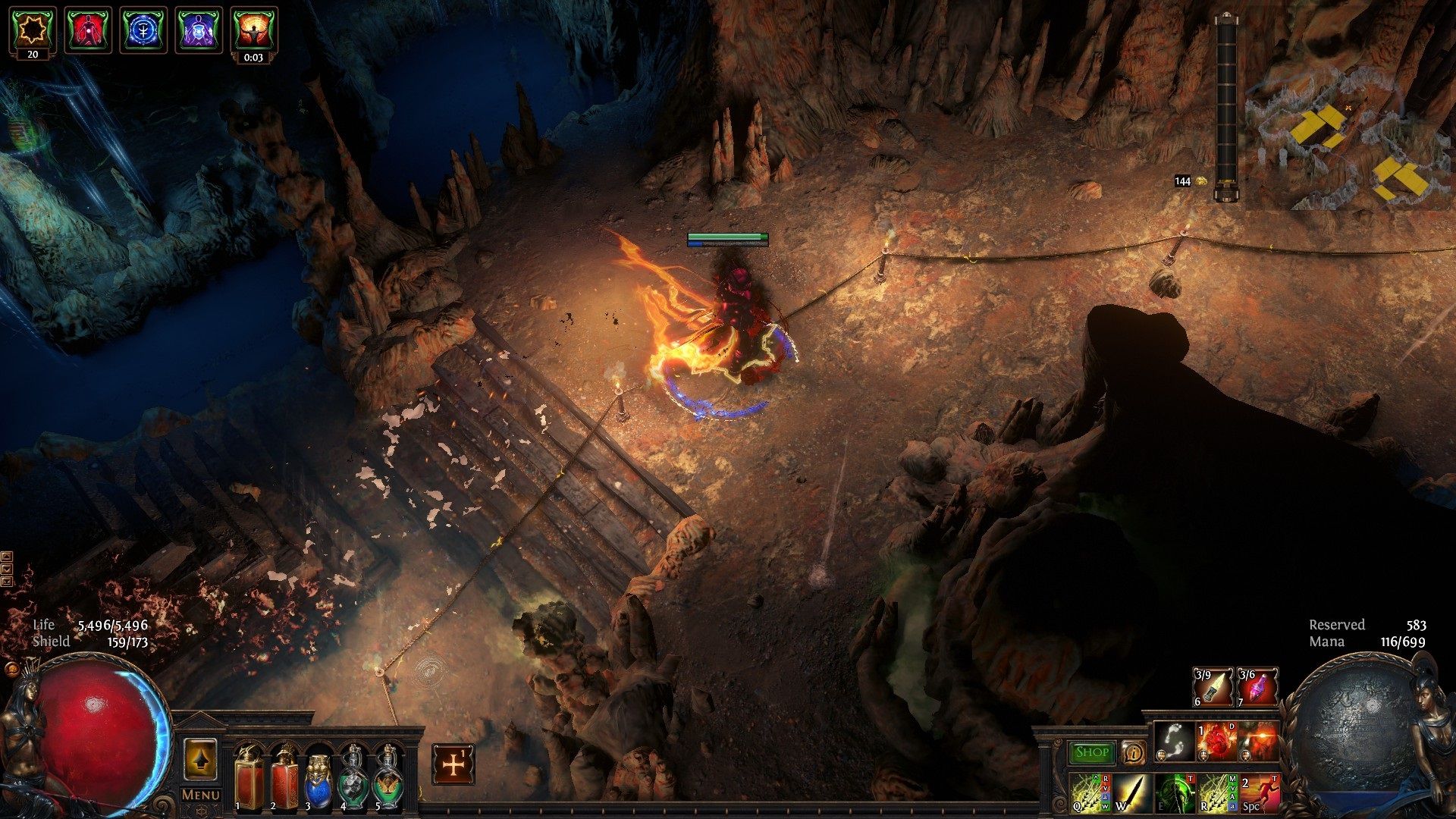 Light itself comes from two different sources. You carry a limited number of Flares that you have to buy that you can drop that last a few seconds. The crawler that you take deeper and deeper into Delve to different nodes lays down a cable that has lights on. 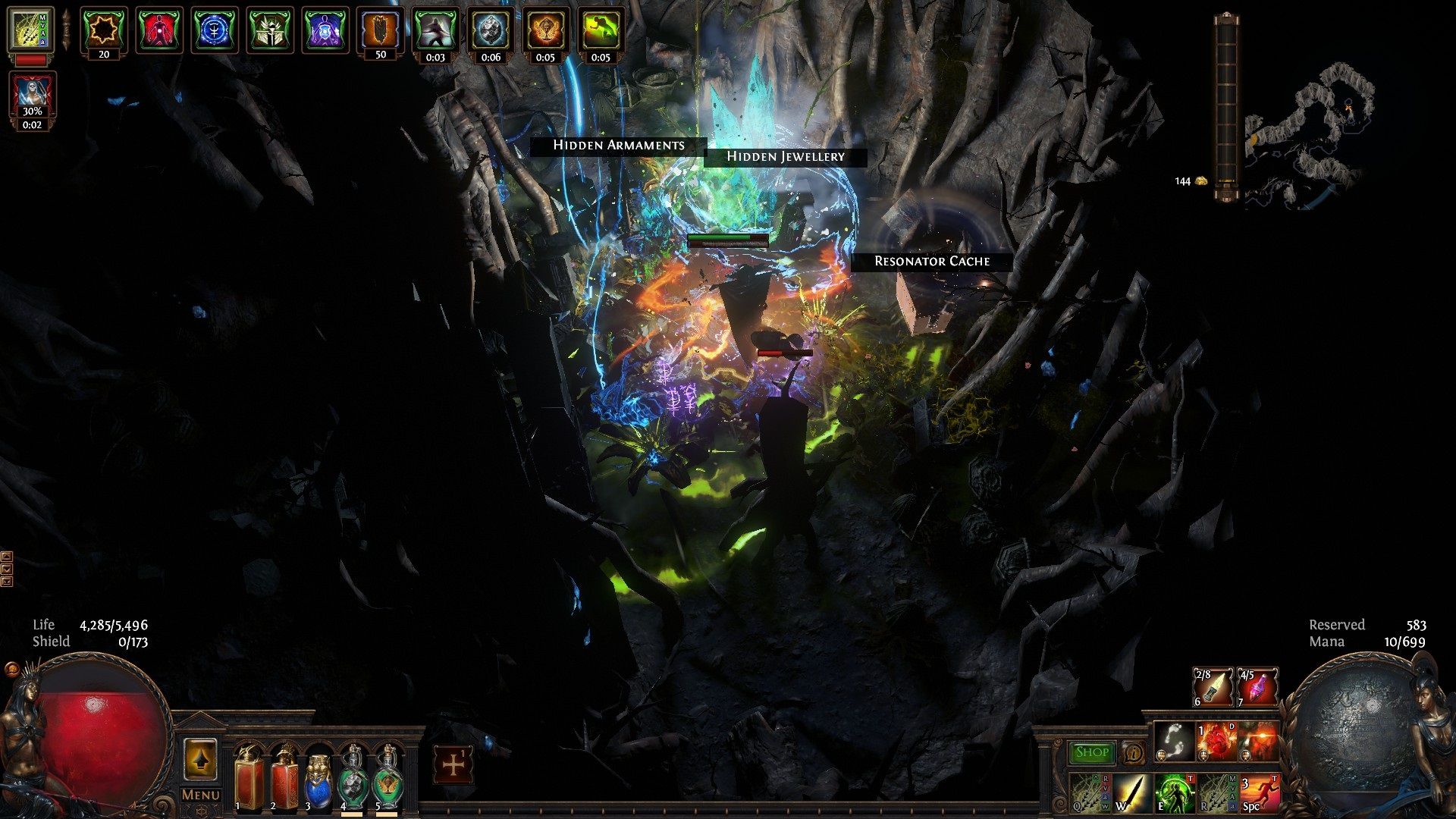 While I’m off in the darkness exploring I’m mostly looking for breakable walls that you can blow up with dynamite. They mostly contain a small loot chamber with some chests to open. There could be fossils, resonators, jewelry, currency, and many other things.

While I did loot all the resonators I found since they are used to crating. Most of them are all near worthless and that is why I sell them in bulk. The one I was hoping would drop that didn’t were Prime Chaotic Resonators going for around 25 Chaos each. 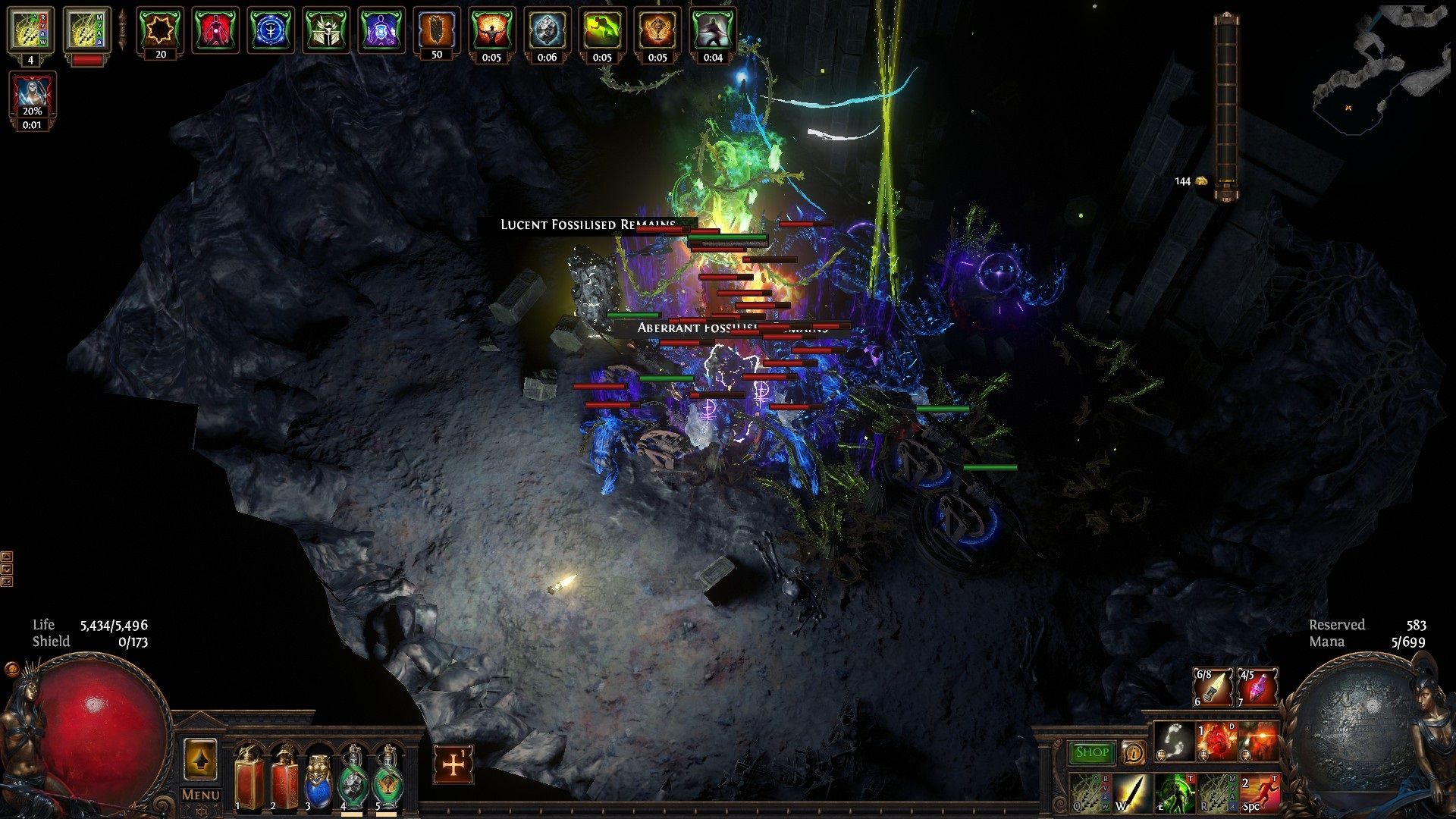 While some of the fossils can go as high as 30 Chaos or so each. I was not really in an area that had high value and I don’t quite recall the rules for the spots you want to search the darkness in. The ones I found were worth between .5 to 4 Chaos each.

Quite a lot of the little areas in the darkness you explore are tight spaces with high monster density. While I do have phasing skill that allows me to easily travel between monsters. It does have a bit of a cool down and getting trapped along a wall or doorway with lots of stacks of darkness dealing damage can be an easy way to get killed. Many times if I needed I would drag out a few of the monsters to where the light was. I then would kill them which allowed me to top off my flasks for health and mana. It would then make it easier to get around saving my travel skills for needed situations.

Every so often I would have to go to the surface to restock on dynamite and flares. You can also only travel so far before you hit an invisible wall of the instance which can get annoying. Frequent trips in and out of the mine resetting the Delve instance and dumping loot while restocking helps prevent issues. Chances are I’m just not deep enough in Delve yet to start seeing some of the more amazing loot. The deeper you go the more risk and possibly more rewards. I ended tossing the bulk of what I looted less than a bunch of amours into a single stash tab to keep track of things. This also included some small earlier darkness farming from a couple of trips down there.

I ended up looting almost an Exalts worth of loot. I’ve yet to sell it but will be soon. With over 30 Chaos in raw currencies alone that helps. Since I did not get the high price to resonate I was hoping for there to be around 25 Chaos worth of the lower ones. With the largest of the worth coming from fossils being over 60 Chaos. Not a bad little pile of loot for stuff that was just left behind waiting for me to get to from my earlier exploration trips.

Hopefully in a week or so I will have explored much deeper and have a bunch of darkness to check. While some prefer to do that as they go. I hate feeling rushed and rather take my time and just do a bunch at once.