Up till this point, I was feeling almost invincible. Sure, I would have a death here or there but nothing seemed un-killable. That was until I ramped my Atlas up another notch and discovered I was not ready for what was awaiting me-- death. I felt the Tier 16 maps I was getting were not that much of a challenge. I wanted to increase my Atlas bonus even further. This involved killing off a lot more bosses and gaining the last Watchstones I was missing.

The fights themselves were not much of a challenge at all. Other than some mana issues here or there and things taking a bit longer than I would have liked to kill. Almost all of them went down without me getting killed once. 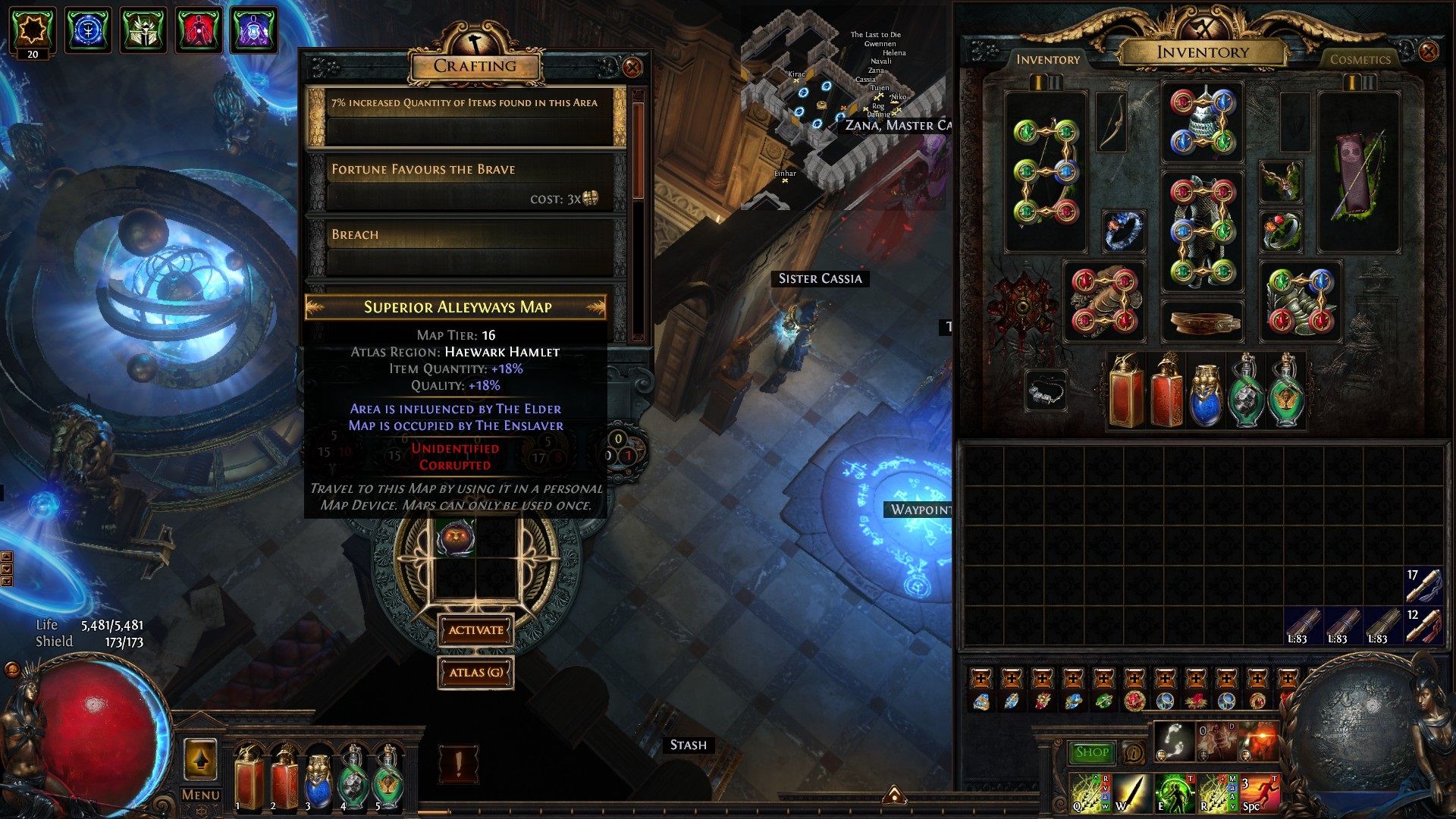 After that elder influence started to make things a mess. I had some Tier 16 maps with their influence on them. I thought to myself how hard could they be? Curb stomping hard for my current gear it turns out.

Some of the monsters that get influenced by different elders don’t seem that challenging to deal with. The ones I thought would be an issue ended up not being –casters NPCs. They are for whatever reason, not something I worry too much about if I notice one has been empowered. They just take longer to kill

What was to my shock and horror were the melee damaging ones that just stopped me cold and dead in my tracks. Despite having all the armor buffs and gear I have. They just melt me like butter. I don’t know enough about them to fully understand where the issue is.

One thing I have not gotten on any of my gear yet but it would make sense to be my issue is the lack of chaos resistance. The issue is I now have multiple regions of the map that have become quite rippy to deal with. I’m also rather stubborn and want to increase my atlas bonus even further.

While I could have removed a stone out of each of the watchtowers I went with things. It was and fun at first hitting this challenge of monsters in packs that could kill me so quickly. The loot as well could be nice if I ever work out prices people will pay for the type of stuff that is dropping more frequently. One of the things I was holding off on running where a bunch of unique maps I had. I knew some of them can be worth a fair amount of currency. I doubt I’ve ever gotten anything out of them coming even close in past leagues with how much they can cost. I just wanted to increase my Atlas bonus and felt like now was the time to run them.

I was still at the time quite overconfident in the build I was playing and my abilities. I thought I was such a badass I did not even identify the map. I walked into that place almost 50% into level 93. Which was about two days’ worth of experience or so. Leveling had slowed down a lot.

The first pack of monsters I killed rained loot all over the floor. I must have looted over a dozen chisels and other currencies. They were also dropping possibly higher-end gear as well. The kind of stuff I struggle to price and takes a while to sell.

There was however an issue. This place was insanely rippy. Before I had even made it to the boss I had died twice. Those two deaths would come back to haunt me later. I however pressed on.

I took my time and slowly worked down packs of monsters. There were a lot of breaks and thinking before diving headfirst into what could be certain death if one is not careful. It was an overall insane experience.

I finally made it to the boss. Before I was even out of mana I got nearly one-shotted and did not survive long enough to heal up. While it was tempting to stop right there I was already down a large portion of the experience. I also thought I still had a chance to kill the boss. I marched back in a few more times to only get owned like a noob. I was starting to learn the fight and avoid some of the damage going on. It was however not enough. Before I knew it I was down to one last portal left along with a sliver of my remaining experience for that level. I died moments later never to return to that map.

I knew this map had to be something special. So I ended up looking up the price for it on the market. It was going for around two exalts each. If I had sold it instead of trying to run it I could have gotten an upgrade that might have made it easier if I ever looted one again.

I did end up with a load of loot. While I think there are several exalts worth of items in it. So far I’ve only had around 20 chaos worth of sales. The above screenshot is just some of the more valuable things I looted out of the map. I was not expecting that much loot and barely had enough space between all my storage tabs to just chuck items everywhere. 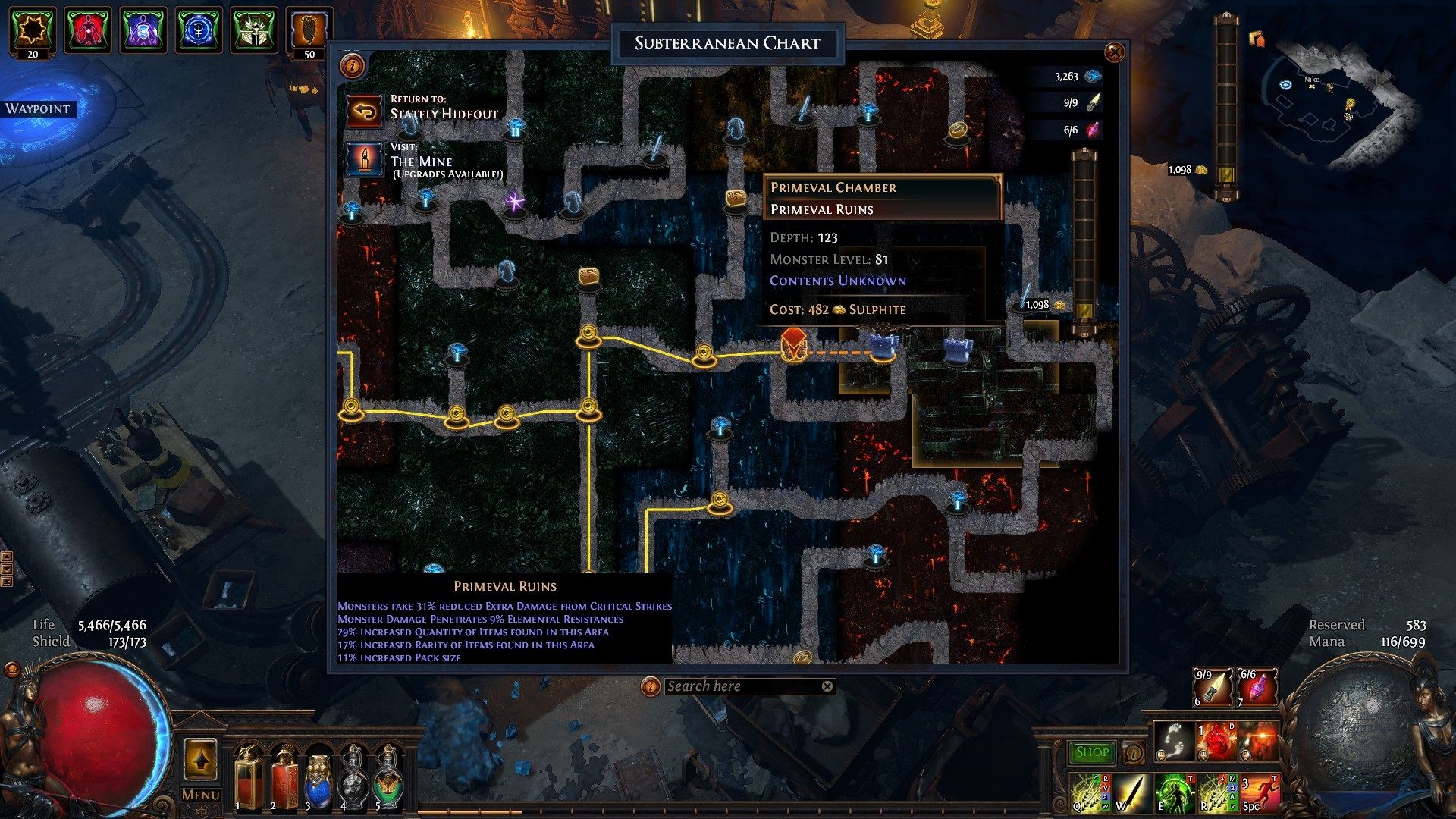 I had been exploring the Delve mine for several days now worth of Sulphite without finding another city. Instead of going deep as I had planned, I went sideways trying to find a reasonable more straight path downward. I at least found a city to explore before I was about to call it a night.

It turns out if I would have taken the original path I didn’t want to go would have saved myself a lot of Sulphite. I must have wasted around 10k Sulphite moving sideways instead of going down. I thought at least it was about to make up for it when I stumbled upon a small city. That small city only had three areas to explore. While I thought that was going to be the least impressive thing about them I was wrong. The above screenshot was the best lot out of all of them. At least I got more maps to get killed in. Progress has slowed down quite a lot. I at least got a large cluster jewel I wanted. This was the sole reason I felt I was ready to take on a harder Atlas and some other challenging content. While the jewel did add some damage to my build it’s not enough to make up for how quickly I’m getting killed.

Looks like I’ll be needing to do some gear shuffling soon enough. While I do have a decent buffer of resistance that I could lose some if I had to for an upgrade. I also need a piece to have strength on it to replace my belt. Hopefully, over the next few days, I’ll find get some chaos resistance and a lot more life so I can take some of the bigger hits I’m dealing with.