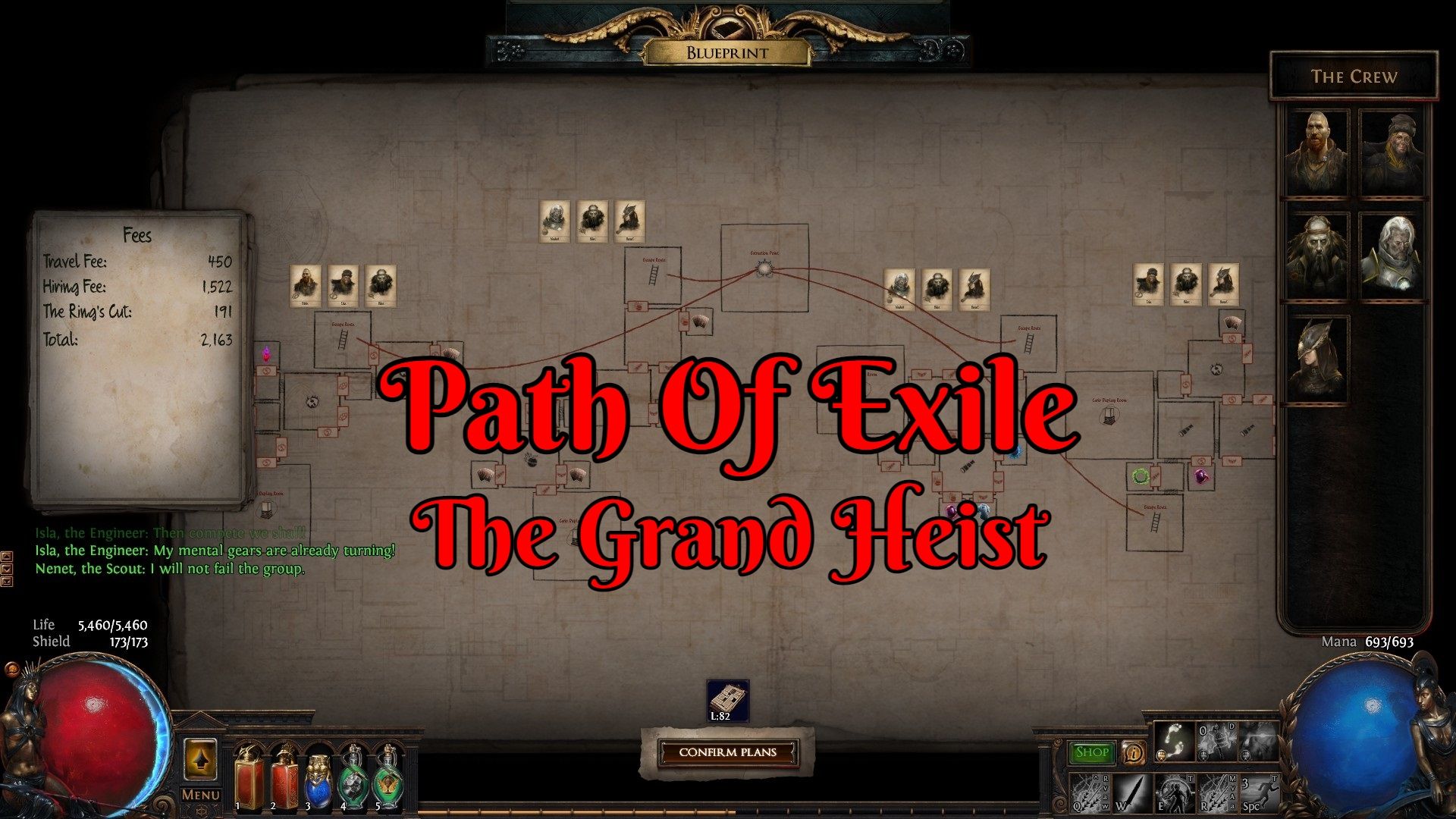 I was quite in need of some currency to buy big-ticket items in Path of Exile. It was time to pull off my biggest Grand Heist to date. I had dreams of it raining down buckets of currency and items. Things didn’t go quite as planned.

I was getting ready to do just a normal Grand Heist. I thought I would have a chat with the guy that can reveal further information on the blueprints for Grand Heists. When I have done this before you can unlock several more side areas or even an entire new wing to run. I was not expecting to be able to unlock another 3 wings to run for loot.

My pockets were jiggling with Heist coins and I’m willing to admit I went a bit overboard. At this point, I was quite confident I had enough money to just run whatever I wanted and not think about it again. This massive Heist I was planning cost me just over 28k Rogue’s Marker. Which is worth around 60 Chaos Orbs all on its own.

I admit I could have done it a little cheaper. I wanted to go after the bigger loot chests so I made sure to unlock a couple in each wing if there was nothing I consider to be “interesting.” At some point, I need to do some research and find an order of importance in what I should or should not be focusing on revealing for the different Heist loot rooms. For now, I just wanted a few options and I’d see how it went inside.

I selected the best crew I had for the different jobs. Most of them still needed some experience and were yet to be maxed out. Since this was going to bring in some massive experience for them I made sure I would benefit on that front as well.

I even wrote down my little plans for each of the different wings. That way I would know for sure what I wanted to hit and what to leave behind. The wings themselves are not exactly as they appear in the blueprint but close enough that you get a general idea of where things should be on the map. The first wing I ended up hitting would have been my last wing to reveal. In the blueprint I was running you would get a choice of currency or a trinket once you have made it to the vault area. I was hoping to hit it big with this one to cover a few upgrades. 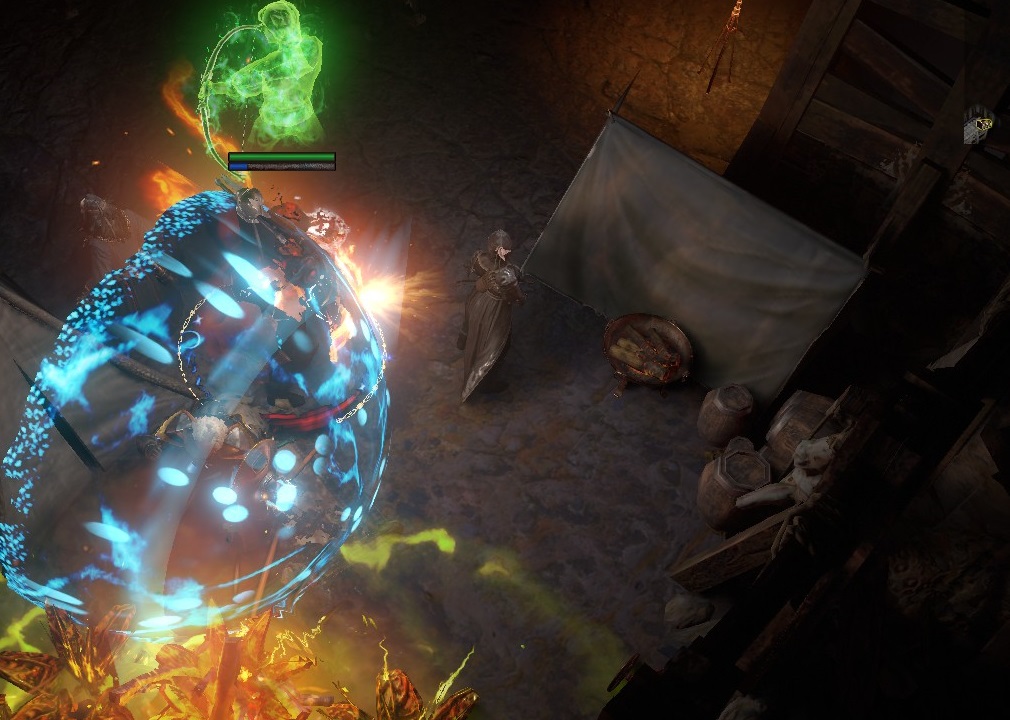 Thankfully I did not find any alarms to trigger increasing my alert level. We were less than quite blasting open lots of things and killing anything that moved. At this point, I prefer to clear out the main areas before the alarms trigger. It seems to make escaping just a tad easier. We finally get to the main target. We could only break open a single display case before the rest would disappear triggering the alarm. The choices were a bit lackluster. There were a couple of Thief’s Trinkets and they all were selling for three Chaos a pop after checking the prices.

I ended up leaving with eight Chaos Orbs I got by smashing open a display case. That sadly was the highest valuable thing I got out of that wing. It was a bit of a disappointment as I’m not even sure it covered my costs to unlock that wing in the first place. 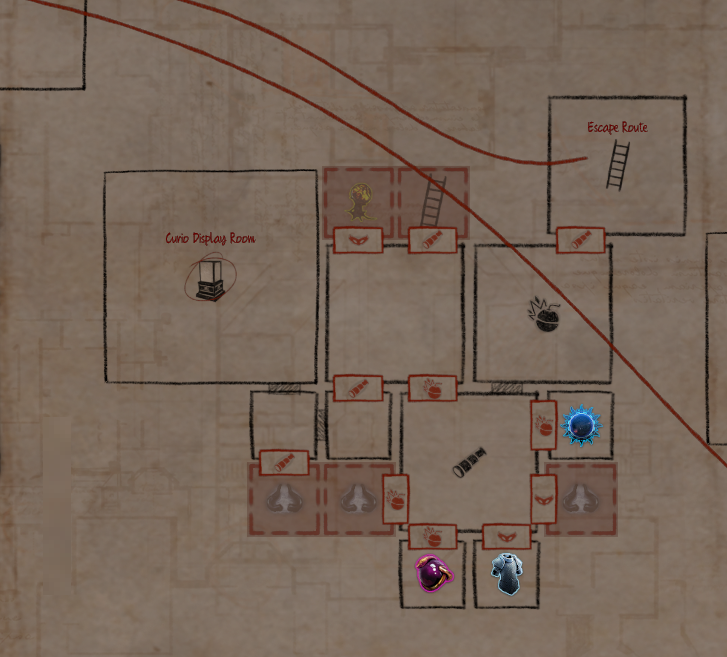 I decided I wanted to leave the original wing on the blueprint as the last one to do. I was hoping that would be the one with the biggest loot in it. As such, I went around clockwise from the next wing to hit in line. That overall rooms in this wing were not very impressive to start worth.

The harbinger chest room that we blasted into ended up dropping one shard of an exalt in each of the two chests inside. While not that great it was much better than anything else I found in the other side rooms.

This was starting to look like quite the bust. My inventory was getting quite full before I made it to the main loot room in this wing. I knew I had yet to loot anything that crazy. Some rusted scarabs were perhaps my second highest worth item. 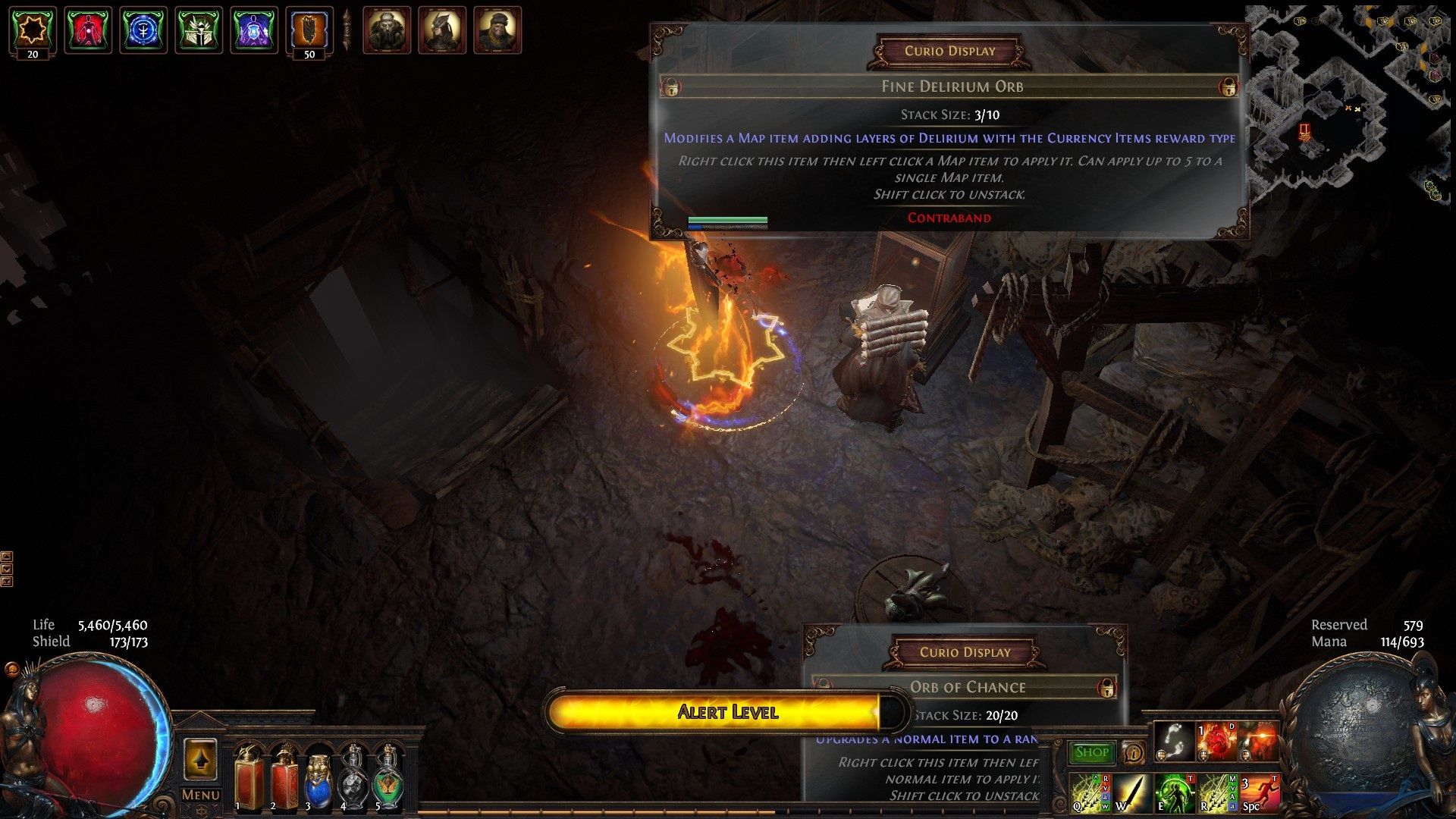 I get into the main vault room and I give out a heavy sigh. I see one case has 20 orbs of chances in it. Another one had some orbs of Alchemy. All the thieves ’ trinkets were near worthless like the last wing I robbed. The only thing I was unsure of was these strange Fine Delirium Orbs.

I was not around for the Delirium league. My eyes widen a little bit when I looked up the price and realized people were buying them for around 12 Chaos Orbs each. My biggest loot yet on this Grand Heist and that alone would cover around half the worth of the Rogue’s Markers I used since there were three.

My inventory at this point is full. Just one issue. There is no storage chest that I could see in the main staging area. I also had no clue if you could just leave and come back. While I could have sorted through my inventory and junked a lot for some space. I took a chance and left.

Thankfully the portal back to the Grand Heist remained open. It’s good to know if I ever plan one of these giant things again that if I need I can leave and unload some inventory to a stash tab for sorting and valuing later on. 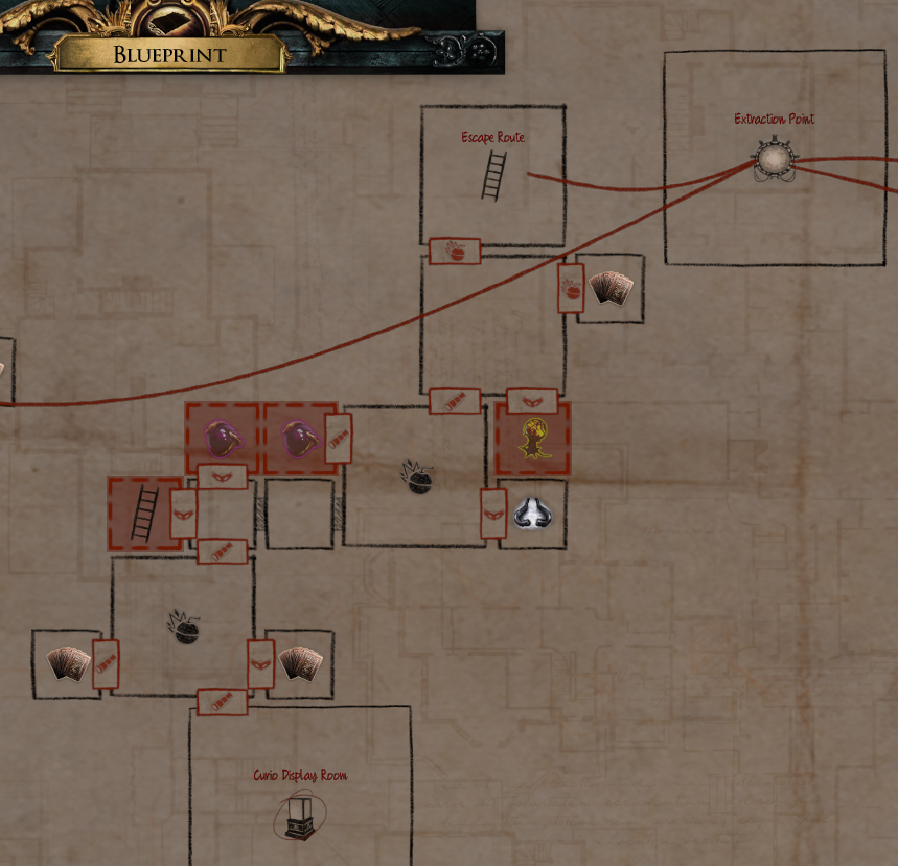 This wing would have been the one I’d have unlocked only if it was not for others showing up on the blueprint. At this point, I’m feeling a bit disappointed in how much loot in value I’ve dragged out of this Heist.

It has a few divination card loot rooms. I even paid extra to have one or two of them displayed in the blueprint before the run so I could break into them. Out of all the cards I ended up getting from the four wings in this Heist not a single one of them was worth more than 1 Chaos. While some cards are worth a lot in this game. Luck was not on my side and making that my choice to target did not seem to pan out well. 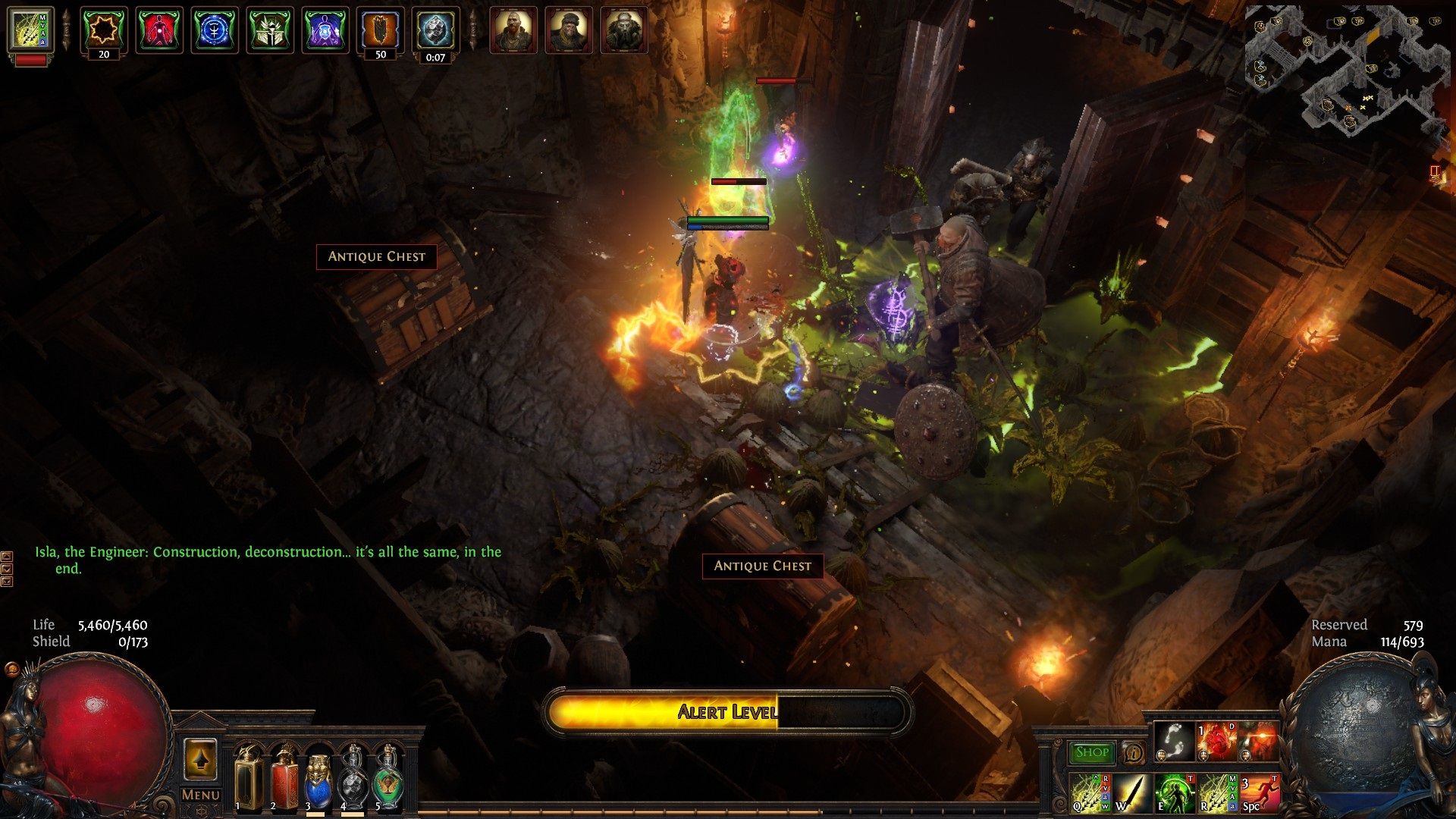 Thankfully from looting a few of them, I ended up getting some Gilded scarabs being worth around seven chaos each. At this point, I’m adding up every little thing I get. It’s going to take a lot of things to get me to my goals of a few gear upgrades at this point.

I get to the final loot room and most of it was again rather disappointing. Thankfully one of the cases had some armor Delirium orbs in them. While not worth as much as the first Delirium orbs I had found. I’m starting to see it has some value in the loot table. If I had not paid to reveal anything out this wing would have been my total run. Do I get a high ticket item or leave with next to nothing? It was all riding on this wing now anyways.

One of the rooms I broke into ended up dropping a few corrupted amulets if I recall. I don’t know the price of them and after some quick lookups, I took a couple that seemed maybe they could sell for something. My confidence in what I’ll be listing them for is not high in getting a sale.

I ended up lucking out when breaking into a chest. No, it did not have riches beyond my imagination in them. One of the crew members that I took along had a chance of there not being any alert level increases when opening things. Which allowed me to loot a little extra in this wing. I get to the end and it has to be the worst loot room of them all. I smash open the case and take the 10 Orbs of Fusing. The alarms are blazing and it's time to make my getaway for the final time on this Heist.

On my way out some of my crew members can loot one extra chests when the alarm is blazing. I send one of them to start their magic and smash something open. That is when it happened. As I was trying to defend him long enough to get the chest open. A rather nasty pack of monsters spawned in. My health sank to almost zero and I thought for sure it was the end. I spammed my healing flasks, my movement skill, and barely manage to recover before another devastating attack landed.

My heart is racing. I’m thinking “oh great I’m going to get killed” and everything I looted in this wing will drop. Despite almost getting killed numerous times I manage to kill the pack of monsters. My crew member opens the chest and – more junk.

We make it to the escape ladder and get the heck out. Nothing like almost getting killed in the last wing. Thankfully I don’t think you can drop loot from different wings. I also had been banking for the most part the loot I was getting. It would have just been a sad ending to my biggest Grand Heist getting killed like that. 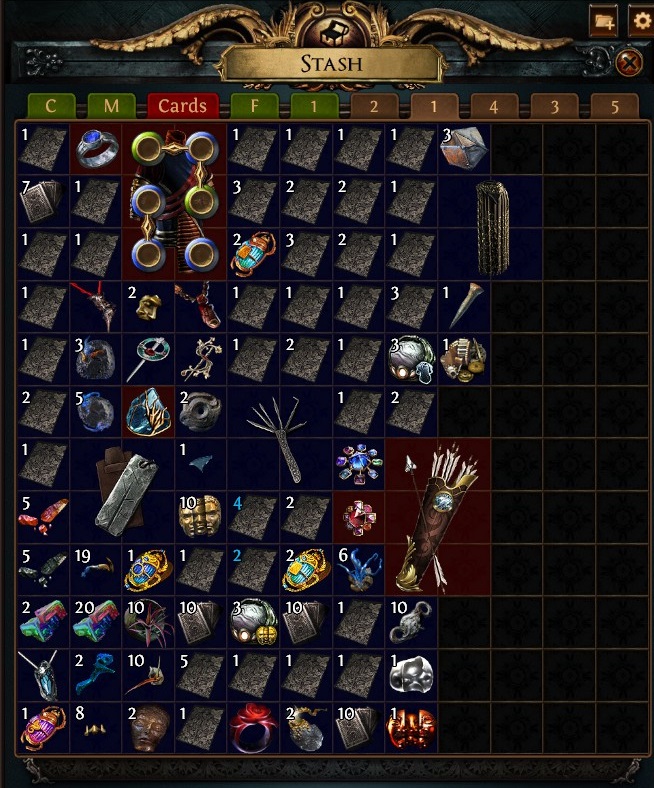 I had bigger hopes that something insane would drop and stand out. I did almost end up filling a standard stash tab and it’s now time to go through it to see what I ended up getting. There is some value in it.

After sorting through the mess and doing a lot of checking the market for prices I sorted things into three different categories: likely to sell or use, highly unlikely to sell, and junk. A lot of things like the currency, stacked decks, and scarabs should be easy to exchange netting me around 170 Chaos. While some of the other stuff I’ll try selling for 126 Chaos orbs I doubt I’ll be getting anything near that for things like the amulets that dropped. Finally, a lot of stuff is just not worth selling being worth around 30 Chaos.

If I end up walking away with around 2 Exalts from running this single Grand Heist I’ll be rather happy. This one has ended up being the biggest total take I’ve gotten from a Heist run. I have a few more to run but I won’t be going as big as this one with them.

I also looted some higher-level requirement tools for my Crew. I’ll be crafting them up and hopefully will land something decent for them. The more I’m able to improve them the better chance I give myself at faster, smoother, and more profitable runs.