While it’s not the most glamorous thing in the world I needed to sell a lot of inventory. While I would still run maps here and there a lot of other actives run the risk of missing trades so I held off on them for the most part. It was time to get a bunch of stuff listed, stay on top of those listings, and make trades.

Over the past several days between running a rather large Grand Heist, Darkness farming in Delve and many other things. My storage stash was busting at the seams. On top of that, I had a lot of things like amulets and rings for chaos recipe turn-ins if I could be bothered with it. 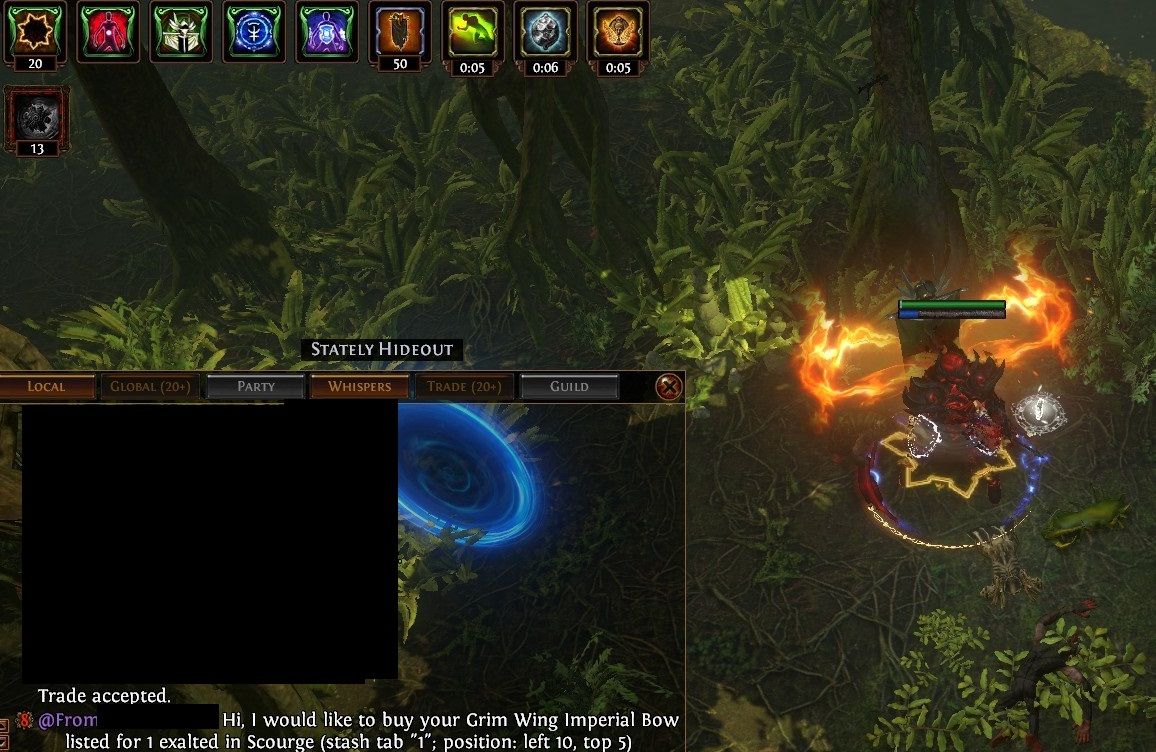 I had an instance where I was barely able to finish a single map run before almost running out of portals. You can only enter a map so many times. I swear I would not get a single person looking to buy one of my items until I jumped back into my current map.

As one does when they are looking to have a lazy day in Path of Exile (PoE). You spend a lot of time just sitting in your hideout without anything going on. It seems like trades come in waves with time zones of people having a break, getting off work, or finally having some time to themselves to gain.

PoE is quite an international game. Quite a few times I’ll go send a message to someone looking to trade an item I have and it will just show up as [][][][]][][]][] on my screen from the trade message I would copy and paste of the PoE trading site. As my system just did not support the language the message was in.

It’s always quite fun to just look at the different country flags that get displayed. You can see the influx of different countries logging in and out for the night. Some countries are a little more willing to wait on trade while others will spam 10 different people at once and take the first one that invites them for a trade.

I’ve also been noticing a rather strange trend between one country of individuals I won’t be mentioning. They seem to be more of the bartering type. I might be asking for 10 Chaos for an item and they will trade with 6 chaos and a bunch and I mean of a bunch of other currencies. More times than not it ends up being slightly over the value of what I’m asking. While I would prefer the exact amount unless I’m asking for a fraction of a currency. I was usually just happy to get the trade.

There were also some items I just hate trying to sell. These are items that the market has a solid floor on that have high turnover rates. They usually cost around 1 Chaos each and you could get a lot of people just not willing to wait a moment before contacting to see if the next person on the selling list has it. It could take half a dozen people contacting you before you end up landing a buyer. They just accept whoever invites them to trade first and mass spam a bunch of people. I can relate if you are trying to find an item and everyone is sold out of it. Throughout this entire process, I had a lot of currency that needed to be unscaled. Most importantly Chaos into Exalts but I was just upscaling everything I had. Depending on the time of day the first person I contacted would still have an Exalt for sale. Most of the time however I could be over thirty people deep in the sell list and still not find someone. The turnover rate on them is insane to even more when there is a jump in price.

Times like these were also the perfect time to go through everything you end up just dumping into different stash tabs. While I usually have a dump stash I’ll use for a certain activity. Sometimes they just fill up and you start dumping stuff where ever you have space.

I also don’t know yet if I’m going to be making an alt. As such, I still have a lot of either unique that could be great to have for leveling a new character. Along with just a lot of junk like lower-level flasks and unused gems. I also just tend to have many moments of “I’ll price check that item later.” Some of that stuff I’m sure has been in this stash tab for a week if not longer. It was also full and in need of a lot just sorting, junking, and selling.

It’s always nice to find a forgotten item or something you did not know is worth 20 chaos to put up for sale. This game makes it so easy to become a packrat. I’m glad I have yet to buy more stash tabs in the game. I keep meaning to I just know it will lead to me hoarding more junk.

After far too many sales of items to think about and almost wished this guy just had an auction house so I could focus my time on other things. Many times steeping away just for 30 secs from the game to have someone contact me about buying one of my higher-priced items and missing the sale. I was nearing enough to buy a massive bow upgrade I wanted.

Just having enough currency to buy the bow itself would not be enough. While it is an ok upgrade from my old 5-link bow just on its own. There was also an Empowered Support gem I needed to buy for it as well and they cost a decent amount to get.

That is when the real struggle begins. You have lots of other players looking to buy the exact item you want. I even enabled the “activate live search function on the trading site every time a bow I wanted to buy would pop up on the market. Many times I just came up short of beating another player to the purchase. With being spammed every so often with loud booms scratching from my headphones that a new item got listed. As such I just kept increasing my currency pile. Re-listing items cheaper every half an hour or so. Checking the buyer and seller markets for bulk items to see if I’d rather just sell directly to someone and get the currency now. Going through my stash tabs to see what else I could just put up for sale.

If I was not able to snipe one of the bows getting listed for cheaper there were always others on the market that tend to sit for hours at a higher price. I was slowly working my way up to have enough currency if I had to buy one. Thankfully I landed a deal on a bow I wanted and refocused my efforts on getting enough for the gem I needed.

Thankfully my old bow despite only being a five-link still had some value. Attempts trying to sell it around the 2 exalt mark failed. Every so often I’d discount it a little bit. I had doubts I would get 2 exalts for it but you never know till you try. The market had a bit of a gap between some stats on my item and lower-quality ones. I ended up selling my old bow for 1 Exalt. Which gave me enough to get the gem I needed with my ever-growing smaller piles of currency. It was finally great after several days of farming and a whole lot of selling to get myself a new bow and a gem to go with it. On paper, I’m doing almost double the amount of chaos damage per second over my last bow. I notice the difference in mapping and run them quicker now. While my old bow was just fine getting me through running things like Tier 16 maps with most red maps easy to farm. I had been holding off on some harder things till I had more damage to take them on. A lot of other gear upgrades I can now make are thankfully a lot cheaper and should not be so much work to get.

At the end of this day, I was quite a currency poor. No phat stack of Exalts and Chaos to look at anymore. Thankfully as I was writing this up I had a 50 chaos sale to help get me started towards my next gear goals of new gloves and a large cluster jewel.