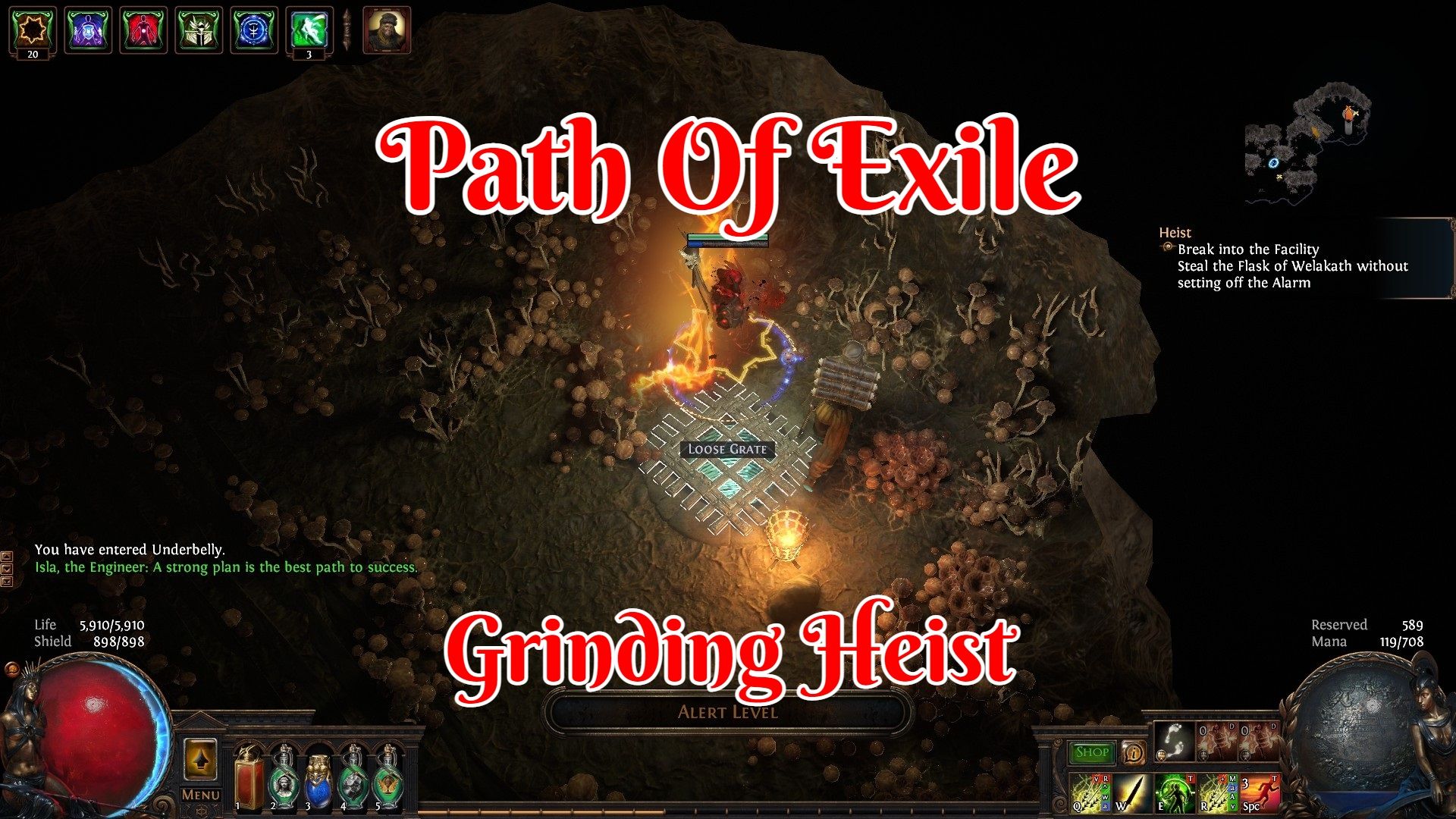 I had a massive stockpile of normal Heists to run that I’ve been itching to get around to doing. I’ve also been meaning to sort out my Heist crew levels that I made a bit of a mistake on. It seemed like a perfect day to do so after hearing some of the crazy loot players are getting as rewards.

Back when I ran some Heists for the first time. I was more focused on unlocking new crew members and using my highest skilled at that time crew to run reach contract. I eventually discovered that most of the ones I was using could not reach the max cap of level 5 for the skill I was using them for (i. e: lock picking, trap disarmament, brute force, counter thaumaturgy, and so on).

I even was running into some issues that I had Heist contracts for both normal and grand that I simply did not have a high enough level of crew members to take on that task. While I could have run some Grand Heists that I have that everyone had the skills for. That seems almost like a waste with how far along I am.

I have not looted a Grand Heist in several days now and I only have a couple remaining. They are better in terms of experience gained and loot if you don’t mind spending more. I want the big ones to be as rewarding as possible once I have my crew more sorted out. I also rather farm the Rouge Mark currency I’ll be needing for them myself since I have a lot to gain from running all my normal Heist contracts.

One of the better contracts to run from my understanding is Lock picking ones. I had been leveling up a crew member named Huck who capped out at level 3. Meanwhile, Karst who is the lock pick expert for the crew was sitting at level 1. This leaves me in a bit of a bind as I have level four and contracts to run that I simply can’t at this time.

Thankfully I had a few lock pick contracts to run among a bunch of other ones. Karst was not the only crew member with this issue. Since I had 27 contracts to run in total to try and resolve this issue for my crew I did a massive grind of leveling up and farming. I was also on the lookout for level 5 gear dropping for different skillsets. I’ve been having quite a fun time running them I wanted to try and take things to the next level. Decent gear can do anything from the increase that crewmembers damage, make them quicker at their skill, grant a party buff, and even increase loot. I still have a long way to work on that front but I’m at least improving.

While I could have tried to speed run the contracts mainly for the experience I did not want to miss out on any loot dropping. It also seemed like a waste to not take advantage of getting loot. These contracts themselves can be worth several Chaos a piece depending on the zone level and skill level. 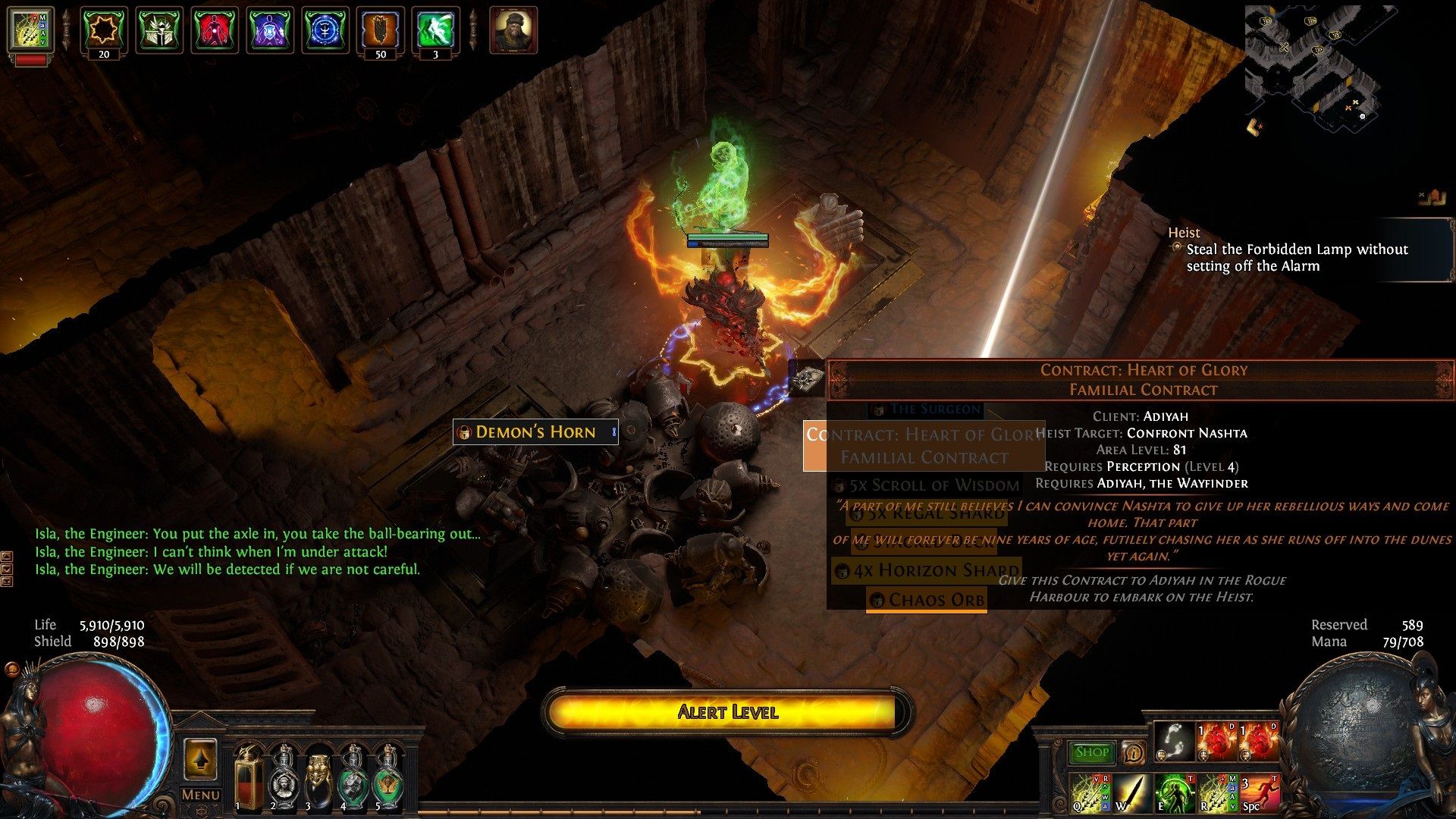 During one of my runs, I ended up having a Heist storyline contract drop. I’m used to finding them while mapping and not inside of running Heists. Things sadly in that one did not go according to plan. I ended up getting killed after I ran out of mana.

I won’t spoil the storyline for Heart of Glory. I’m just a little shocked at how hard it ended up being for those who have some mana issues. You also can’t just port out and get full flasks either. Now every time I go run a Heist the game reminds me I need to finish this storyline contract. I’m not certain how I’m going to end up handling this one knowing what I know now.

I ended leveling up a few of my crew members to level 5 for their skill. This allowed me to run 25 of the 27 standard contracts I have. I still have two level 4 lock picking ones that I’m unable to finish. I ended up getting killed during a level 3 lock picking contract which left me just short leveling up my that crew member. 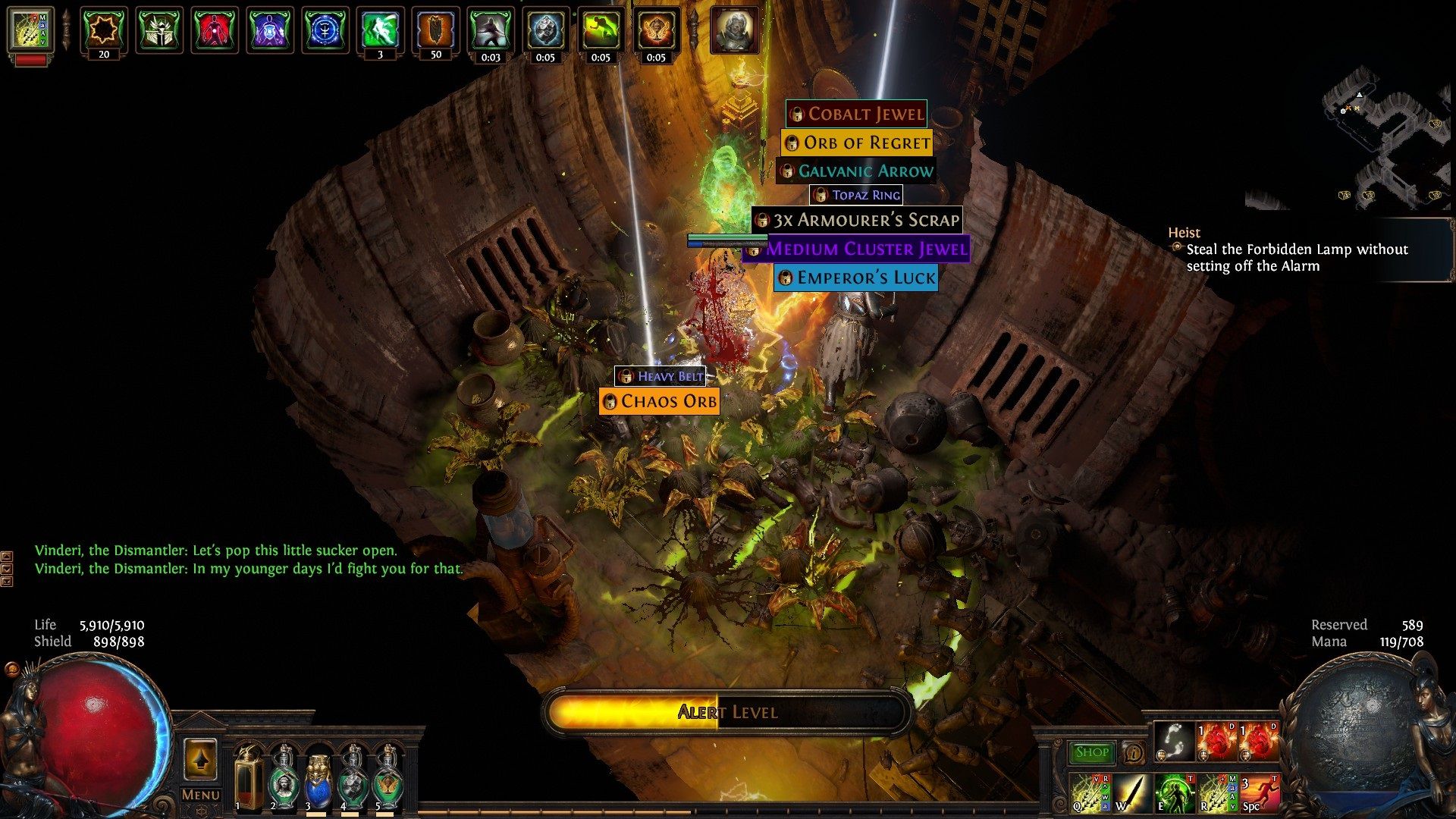 For the most part, a lot of the loot was nothing that special. There are quite some insane things that can drop in Heist that it is almost like playing the lotto. Sure you could get a headhunter, Scourge end game items, and a whole lot of other things. You could also just end up with a Chaos dropping from opening a chest which is better than most things I ended up getting.

It’s a shame I ended up getting killed during two of my runs. As these tend to be quick enough that the experience during the higher level once seems better than running maps. While my crew member leveled up a few times I finished my grind with around the same amount of experience. 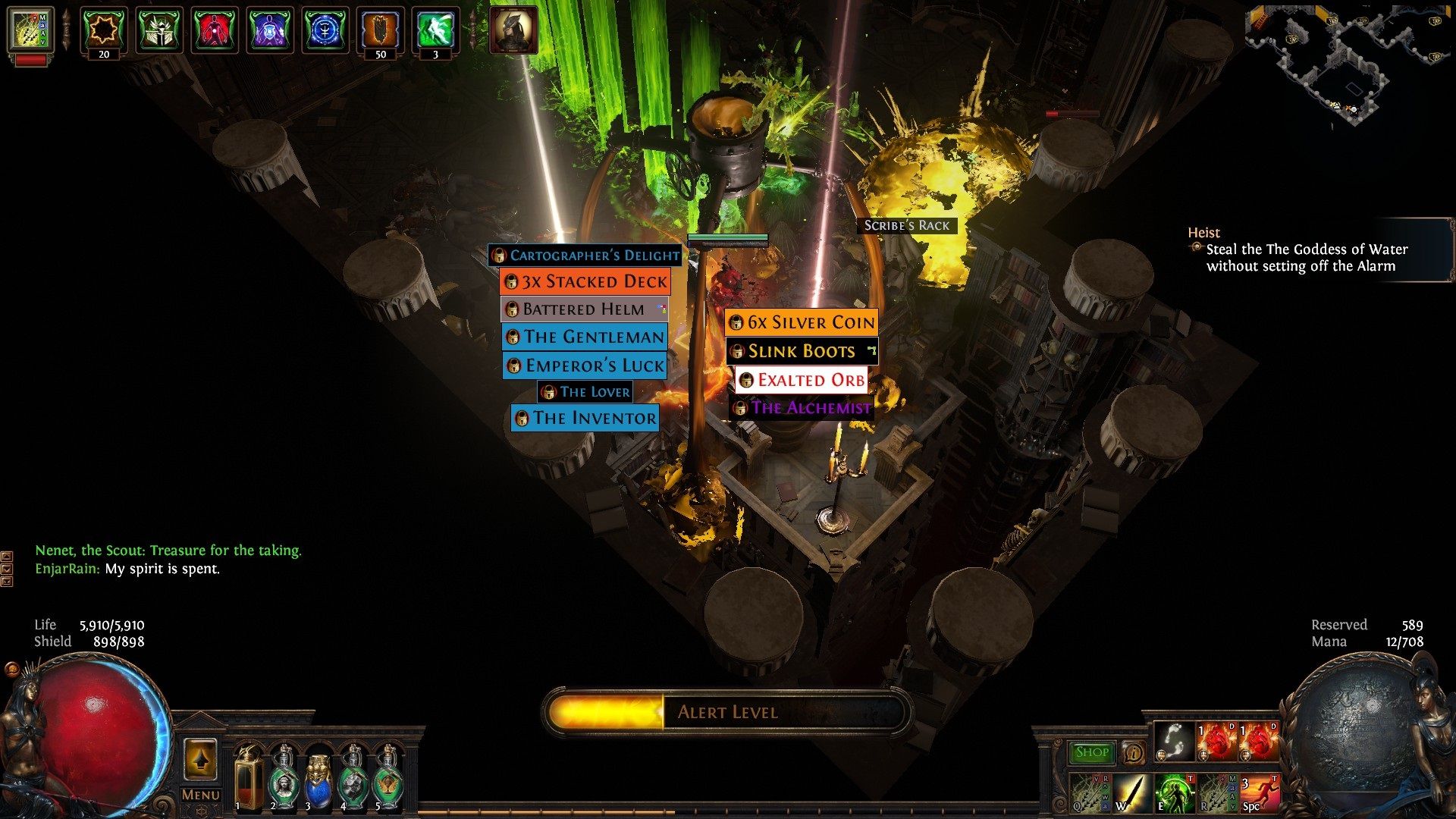 I at least did not leave empty-handed. Within the first dozen or so runs I had an Exalt drop. This is starting to be the league of Exalt drops for me. This also ended up being my single best drop for 25 Heist contracts.

Part of the fun running this many Heist contracts all at once was dumping a large portion of everything I looted into a single stash tab. A lot of the junk, worthless unique, and the majority of the divination cards I put in their proper stash tab or just sold for low-end currencies. 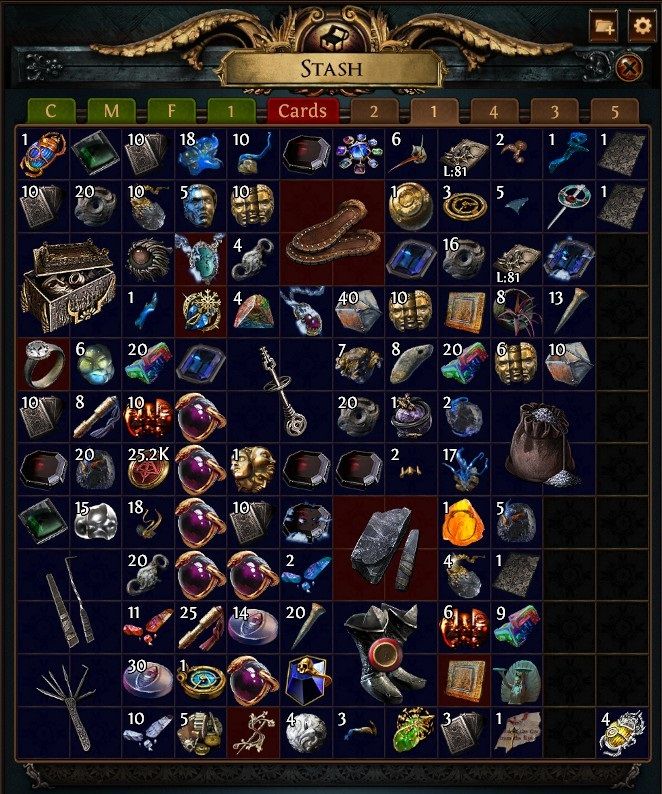 It is amazing just how much raw currency and quick-to-sell items you end up getting from Heists in general. While some of it I’m sure will sit in my sell tab forever. There were some high-volume items that I’ve already sold like Stacked Decks. Along with upscaling some of the currency, I looted, with what I already had.

In total including the currency and what I have sold so far, I got 2.56 Exalt worth of loot. There is maybe another 30 Chaos that I’m still waiting to sell. Looting all the Stacked Decks I did net me a quick 56 Chaos. There are some things included in that total like the Rogue’s Marks that I’ll be reinvesting into Grand Heists in the future which I got around 64 Chaos worth during these runs.

Heists do have a bit of a cost on their own to run. While did not keep track each contract itself could be worth one Alchemy up to three Chaos. If I had to guess you end up spending around 30% of the Rogue’s Marks you get paying for a crew member and the guilds cut. So that 2.56 Exalt was not entirely pure profit. It was still a better-than-average day for me. Running that many contracts back to back did get a bit exhausting in the end. Not out of boredom or anything like it was just a lot of having to react, think, and not get killed. I was hoping I would have been able to run the level 4 lock picking contracts I have but I fell short. Hopefully, that story mission contract I got won’t be an issue when I run it again one day.

I will need to do another massive grind to finish off my crew levels. It will be several days before that happens as I am mostly out of Heist contracts. While I could buy a bunch from other players. Doing so when not bulk buying would be painfully slow and take a while to find a buyer who still had a single contract for sale when you contacted them. The downside to the way trading works in Path of Exile unless you have a connection to a bulk seller.