During the holidays there was a player-run event up on FOMA. The rules were to get the highest global to win some prizes the host was giving away. So I thought why not give it a try?

Finding mining events of any kind these days is quite a feat. While I am not a big fan of mining up on FOMA since you have reduced mining coverage in exchange for a higher mining find if you find anything.

The top prize was a pet that increases your mining extracting speed if it is well feed and active. While that has a cost of needing to buy or craft food and keep them fed. I’ve always wanted a Yog to the point of even trying to catch my own. Yes, Entropia has an entire pet system and some players make money catching and selling pets. So I entered into the player-made event. Since FOMA can be quite volatile and most of the claims you find will be low markup ores and enmatters. I only brought along 5 D-Class amps with me.

I wanted to keep my costs for this somewhat reasonable. I knew using D-Amps on FOMA is not being that reasonable. I thought it was however a decent size. Some players went much bigger than this. Rest in pieces their PED cards on the markup they blew on the big amps.

So I flew up to FOMA which is just a short distance away from planet Calypso. So short it is on the same server as the planet. The space to get there is also non-lootable so I could bring back my finds without paying to teleport back down if I wanted.

FOMA has a bunch of different domes you can go mining in. Since there was an event taking place the were in fact players up there. While It was tempting to go into the main area as I’ve had at least some break-even luck in there quite a few times in the past. This time I wanted to try some domes I know have higher markup ores in them unless things have changed. It can be a rather hit or miss here and I knew if I only found low markup ores while mining here the trip would be a loss.

The interesting thing about amp mining on FOMA with D-class amps is just about every find I get should be a global of 50 PED or greater. If that ends up not being the case things will go sideways quite quickly. Since I’m already quite down a lot on mining over the past several months I had higher hopes I’d have a chance of finding something decent.

The first dome I entered was a total bust. Dome 12 was not having anything for me whatsoever. This is not something you want to happen you go amp-mining up here. I ended up switching over to Dome 14. Again I found nothing at all after a couple of passes in the area. I started to get that sinking feeling that this was quite a stupid idea. Still, though I was in the holiday spirit and I’ll be dammed if I don’t at least find something.

I ended up moving on to another done that I don’t quite recall what it was. It however had another player right on the side I teleported onto. There were also tale tell signs they had already been mining there since they had some claims in the area.

I decided I was not going to mess with that dome. At that point, I decided these “better” domes were just not working out for me. So I just randomly moved my mouse around and picked whatever dome I landed on after a short while. 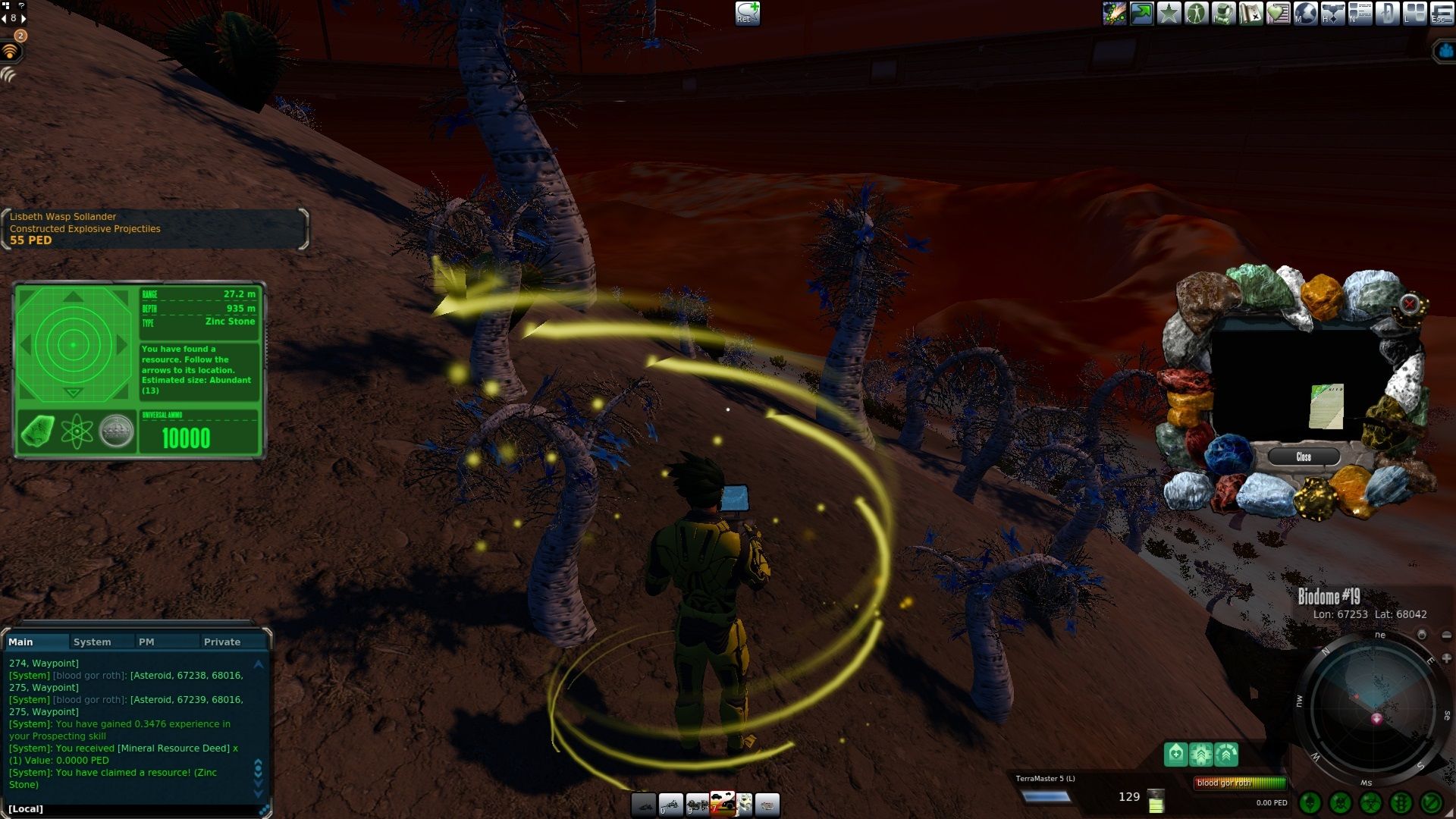 Dome 19 proved to be both a curse and some luck. I knew once I entered there with creatures being seen on my radar that others might choose to go elsewhere and avoid this one. I ended up getting killed a few times while in there as it was a bit of a rough place to mine in.

At least I finally did get my first claim to find for the trip up to FOMA. A size 13 of zinc. zinc is not something you are hoping to find when you are using amps. It was at least something.

I ended up finding another claim not so far from the first one. Yet again more zinc at least this one was a size 14 for 85 PED of the stuff.

Now that I was at least onto finding stuff in a dome. I went quite heavy-handed in carpet bombing as they called it the area. I was not going to be that thrilled if it was just going to be more zinc. I however was here to try and put up some big numbers on the board so I did not want to give up this opportunity of finding an arena that was working. 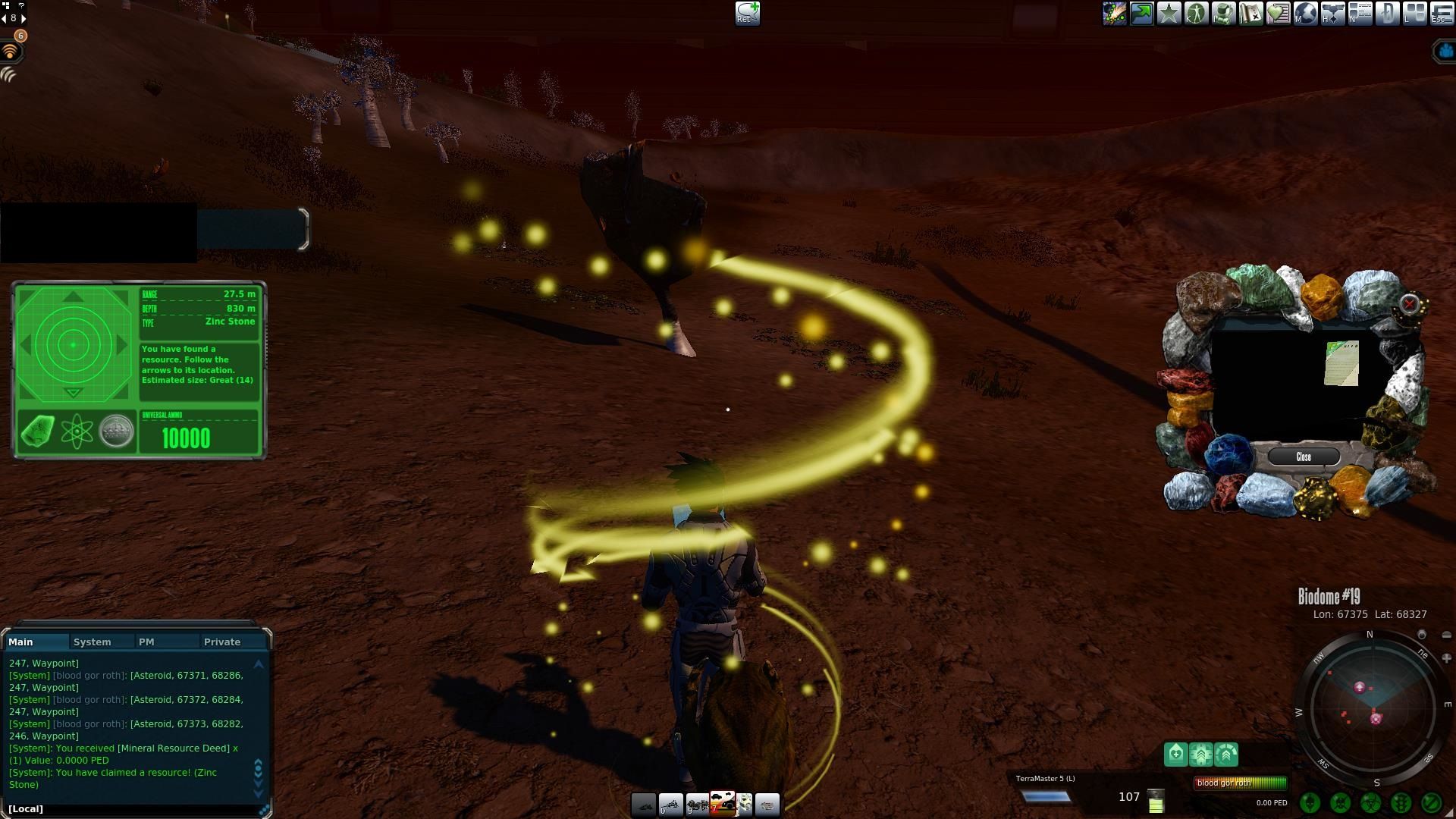 At this point, I had burned through a couple of D-Class amps. I was going to either need a large mining claim or find a pocket loaded with ores to try to break even for this run. It ended up being a few drops before I found my next claim of a size 14 again of Zinc. All the way next to the teleporter into the dome. 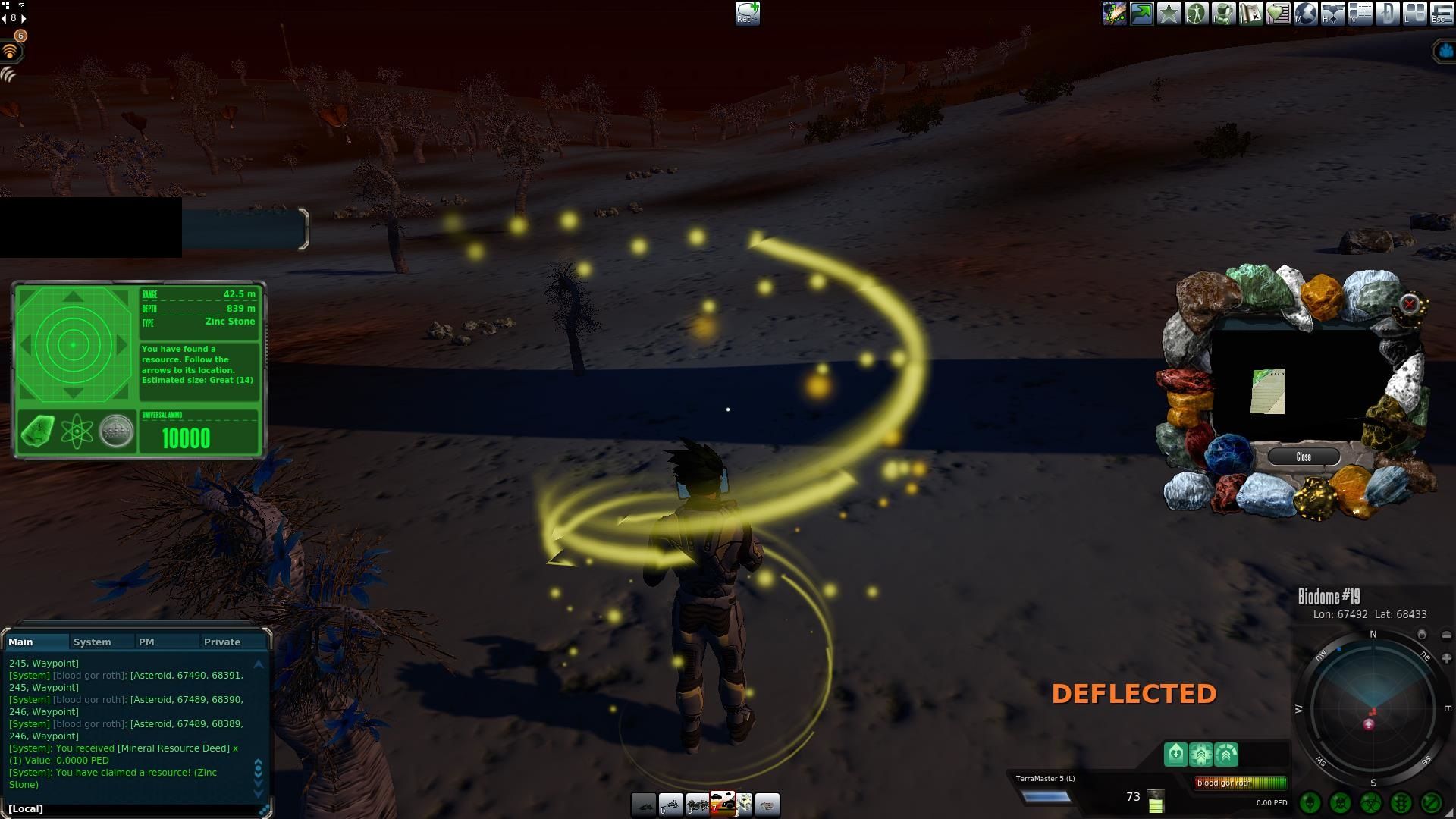 Then would you believe it or not I found even more zinc. At this point, I had quite a few creatures on me from running around in this dome. I even managed to make it to the teleporter that has a gun turret set up that killed the creatures for me.

I also had a couple of non-global claims. That is just not something you want to be seen here. Even more so when it’s mostly more zinc. At least zinc was not the worst thing I would have found in this dome. It is however quite down there usually only going for a 1.02% markup.

Not that far away from another zinc claim, I had found I hit my biggest claim for the run. Another size 14 of zinc. This time it was 115 PED and it ended up being my biggest find during the run. It is also the find I submitted for the event. It was however not big enough or the right ore that prizes were drawn for to win anything.

After that, I would go to find a couple more size 13 finds of zinc and some smaller stuff as well. That however was it. I knew once I dropped my final probe finding nothing at all that this was a disaster of a run. I also know it could have been a lot worse than it was.

I then went around drilling up all of my claims. At least with zinc, I was getting 1.5 to 1.8 per pull with the excavator I use. There would be nothing worse than having a losing mining session and then spending all night having to extract up all the claims. Once I was done on FOMA I decided to go back down onto Calypso and see if I could try and recover my losses for the night. Shocking to me I was almost getting a higher hit rate on FOMA. Down on the planet, I was not getting any globals at all the finds seemed to be void.

I guess it was just a dreadful day, in general, to go out mining for me. I’m starting to have too many of these days it seems. Mining used to be something I’d do to try and cover my costs of playing the game in other areas like hunting. Since my return, it has been a big miss for the most part.

As far as my FOMA run went. Outside of not winning. I also was down about 300 PED. Which for FOMA is not the worst run ever I’ve had. It would just be nice to have come out with something big. It also serves as a reminder of why I tend to stay away from FOMA.