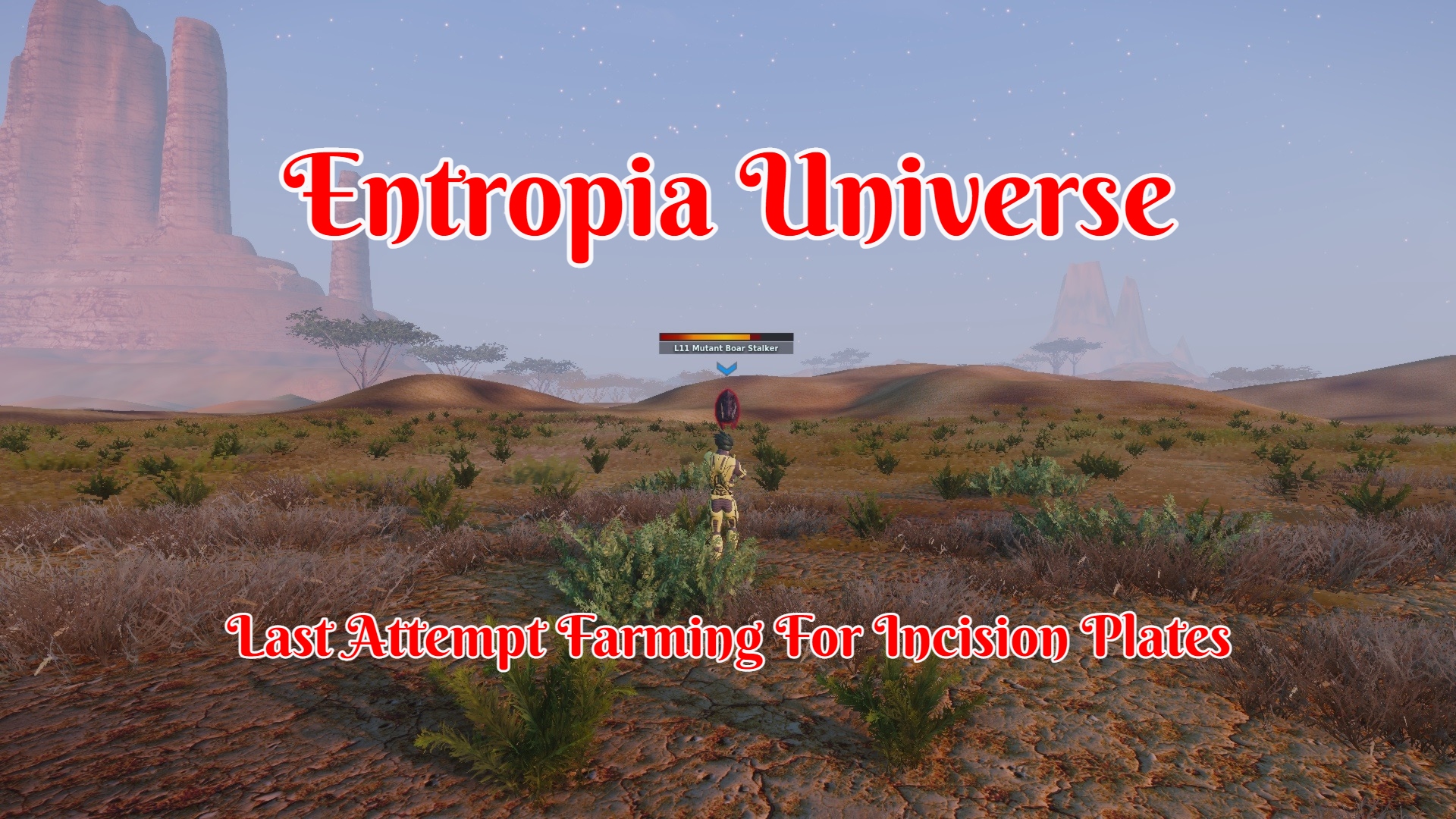 Before I leave Next Island for quite some time and go on adventures elsewhere. I thought I would give it one last attempt to try and farm for some Incision Plates. I’m still only at two which seems a bit low for how many boars at this point I’ve killed.

I have since this post hunting a few other different kinds of boars for different missions and other fact-finding adventures I went on. Nothing much that has not already been shared in other posts was discovered. So, knowing Mutant Boars I have at least gotten Incision Plates off in the past I headed back to hunt some more.

For this hunt itself, I brought along about 1.5 times more ammo than I usually would bring on my normal hunts. While I have been quite big on mutated boars in the past. I was getting quite low on liquidity as I had a lot of loot from my actives from Next Island that I needed to sell off.

Thankfully soon enough I’ll be arranging transportation back to Calypso to sell anything that had failed to sell on Next Island. I got to say from some of the other places I have visited Next Island has in my opinion a much better economy than I was expecting. It still however is not good enough to prevent me from having to take the trek back to my home planet.

I wish I could nail down the lowest maturity of these plates. I however know that from the two I’ve looted they were at least of the higher level boars. There is quite a massive spot not far from the teleporter that I take to get to my area that has a decent-sized amount of the lower-level mutant boars.

I sat at that location and cleared them quite quickly for a few respawn cycles. A lot of the time on low-level creatures in Entropia Universe I always have a bit of a concern for overkilling them by a lot. At least the young boars have 60 health so while there is a little more overkill than I like. It is at least not as bad if I was something some of the other boar types that have a lot less healthy.

As expected there was not much happening hunting those smaller boars. I for sure could kill a lot more of them in a given hour than I could the bigger stuff. Sometimes since they are a thicker spawn I would get a few of them all charging at me at once and I’d just mow them all down. It was however not enough. As a result, I ended up making my journey back to my usual spot. Not without a few pit stops along the way, however. While I had my waypoints set up as usual that I was working my way towards. There is this certain bend in the mountain that I tend to follow that has some spawns that I enjoy camping.

Since these were at least bit higher level boars I sat here as well for a bit killing a few respawns of them. After a while, I checked how much ammo I had left and decided to keep making my journey further up north. 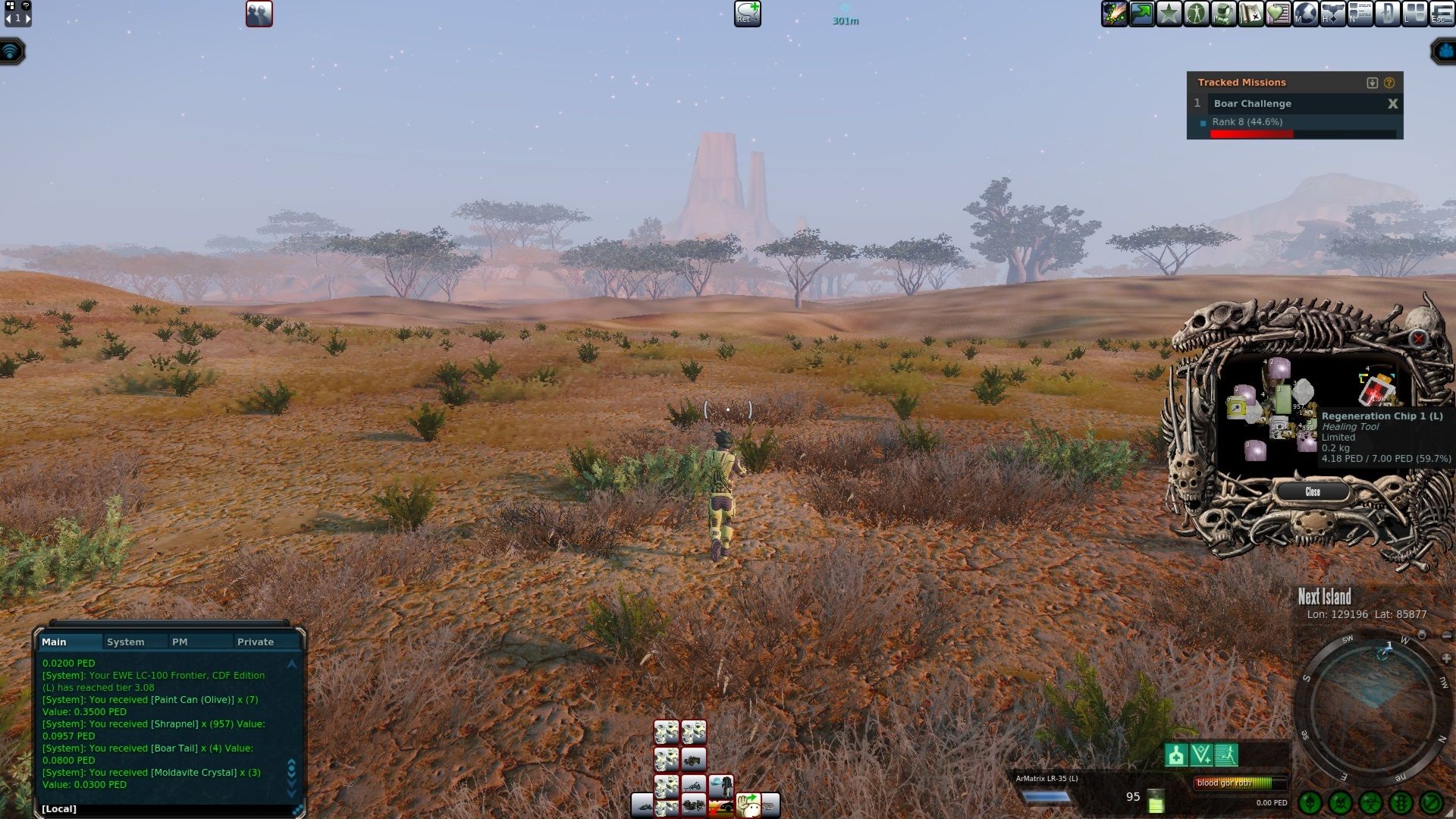 As usual, I ended up if I was looking for anything decent just getting more regeneration 1 healing chips. I wish I could find some other areas I have not hunted mutant boars in before as I would be interested to see if I would not get as many of these chips and perhaps something else far more interesting.

During this run, I was getting a lot more loot than usual even when I did not get a chip in it. Certain areas were dropping loot a lot better than others. As such, I did my best to follow those patterns I was noticing in the loot the best I could while they lasted.

After a while, an area would go back to not looting so great and I would roam around the lands on the hunt. Sadly, I would not find any Incision Plates this run. I’m somewhat shocked by that.

With the amount of PED in ammo I’ve cycled it almost is tempting to just buy the plates with how cheap they are getting. Along with trying my luck getting the rest of the parts by farming what I can for the next tier up. 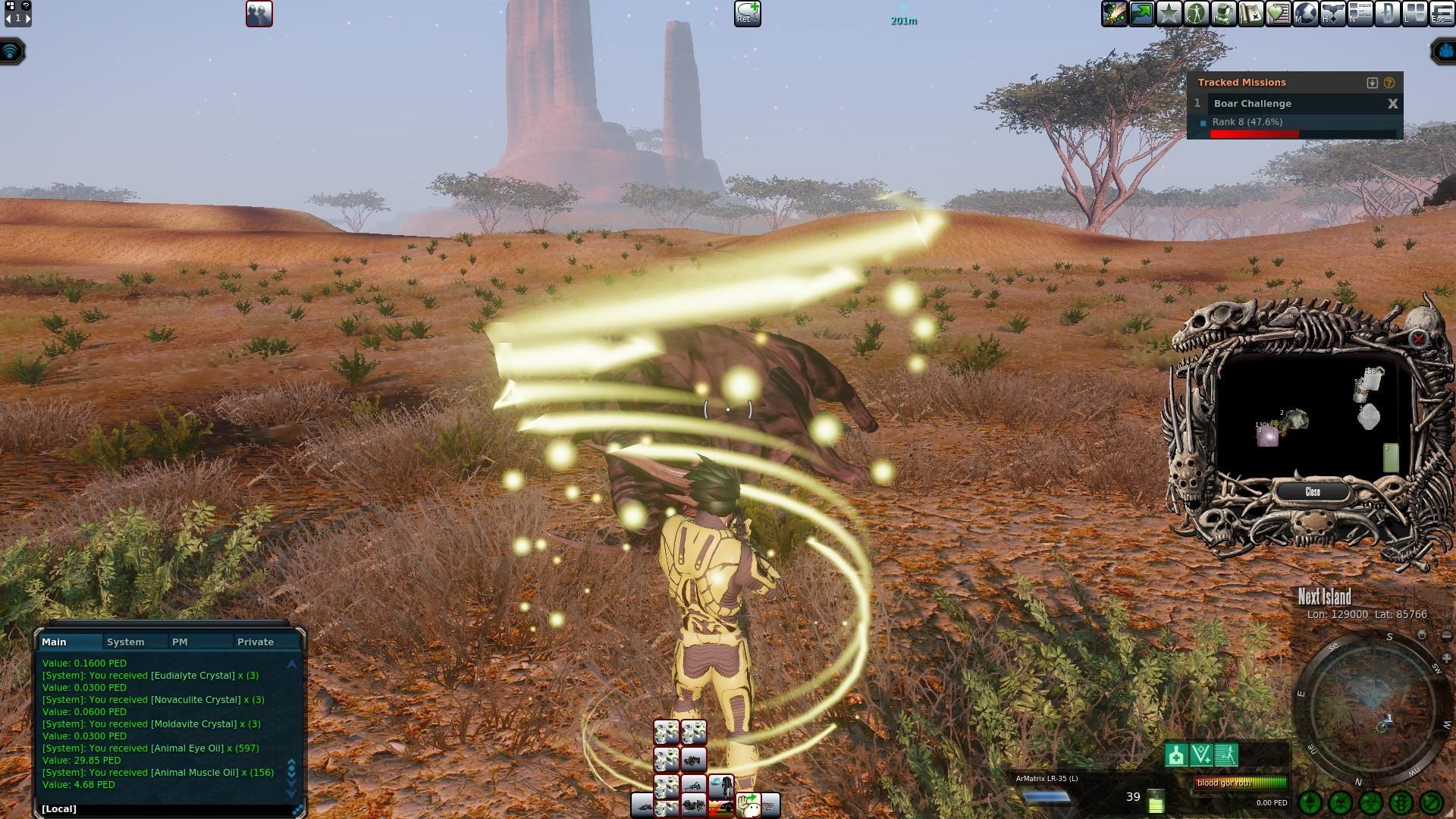 I did at least get a decent-sized global on this run. 61 PED off a 500-health creature is rather nice. Without this, it would have been only a slight loss before accounting for the little bit of markup I have found. Sadly, a lot of the boar drops don’t seem to be worth as much as Next Island specific crafting materials found on other creatures are. I can only suspect these have been hunted to death by so many wanting the plates that there is just not enough demand for the other loot. Like all hunts, you come down to the last kill. Nothing special. This concludes quite a lot of hunting on these things and in total only getting 2 Incision plating with zero looted this time around. I was expecting these to be a lot easier to acquire than this. This ended up being another hunt I was up on mutant boars. Overall by my numbers, I had some decent runs on these creatures. I just did not get enough of what I was looking for to want to keep coming back over and over again.

Perhaps the next time I return to Next Island I’ll try finding out if these can be found elsewhere. If nothing else perhaps it is time I move on to trying some other boars. These just seem to be taking a lot longer than I was expecting for the starting point of these. All the other stuff I’ll need will take an insane amount of time and cost more to acquire.