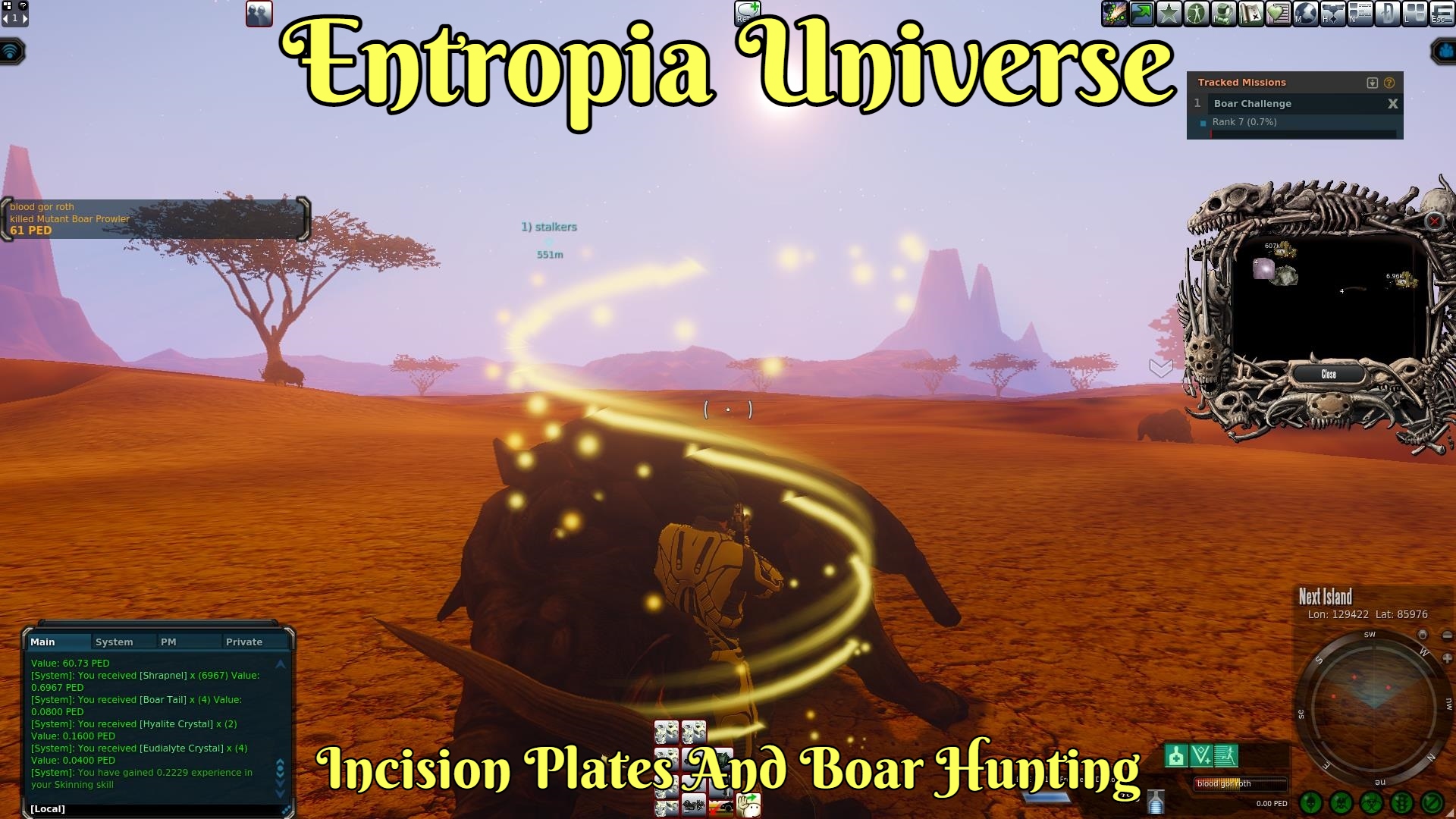 One large reason I ended up coming to Next Island in Entropia Universe was to check out Incision plating. I don’t have many different kinds of plates to wear in my armor and such things can be a great way to improve the armor you already have without having to invest in further sets of gear. These plates can also be upgraded.

The plates themselves are the lowest tier and are not that great. I already own a set of 5B and unless I’m hunting something that has a usually high amount of stab damage I would more than likely prefer 5Bs over an Incision plate with its 4 cut, 4 impacts, and 21 stab protection.

The 5B plates I have however are insanely expensive to try and upgrade. There are also only a couple of people who can craft 5B plates in Entropia Universe and the upgrade path consumes a lot of plates and other special materials.

Incision Plate on the other hand requires some pricey things to upgrade as well. Appear at least from the outside to be more obtainable for at least getting the first tier or so upgrade possibly.

The next tier up of Incursion is Adjusted that have slightly better protection and provides a 1% block chance for damage which is quite a big deal as that percentage increase slightly the higher the tier the plating is. 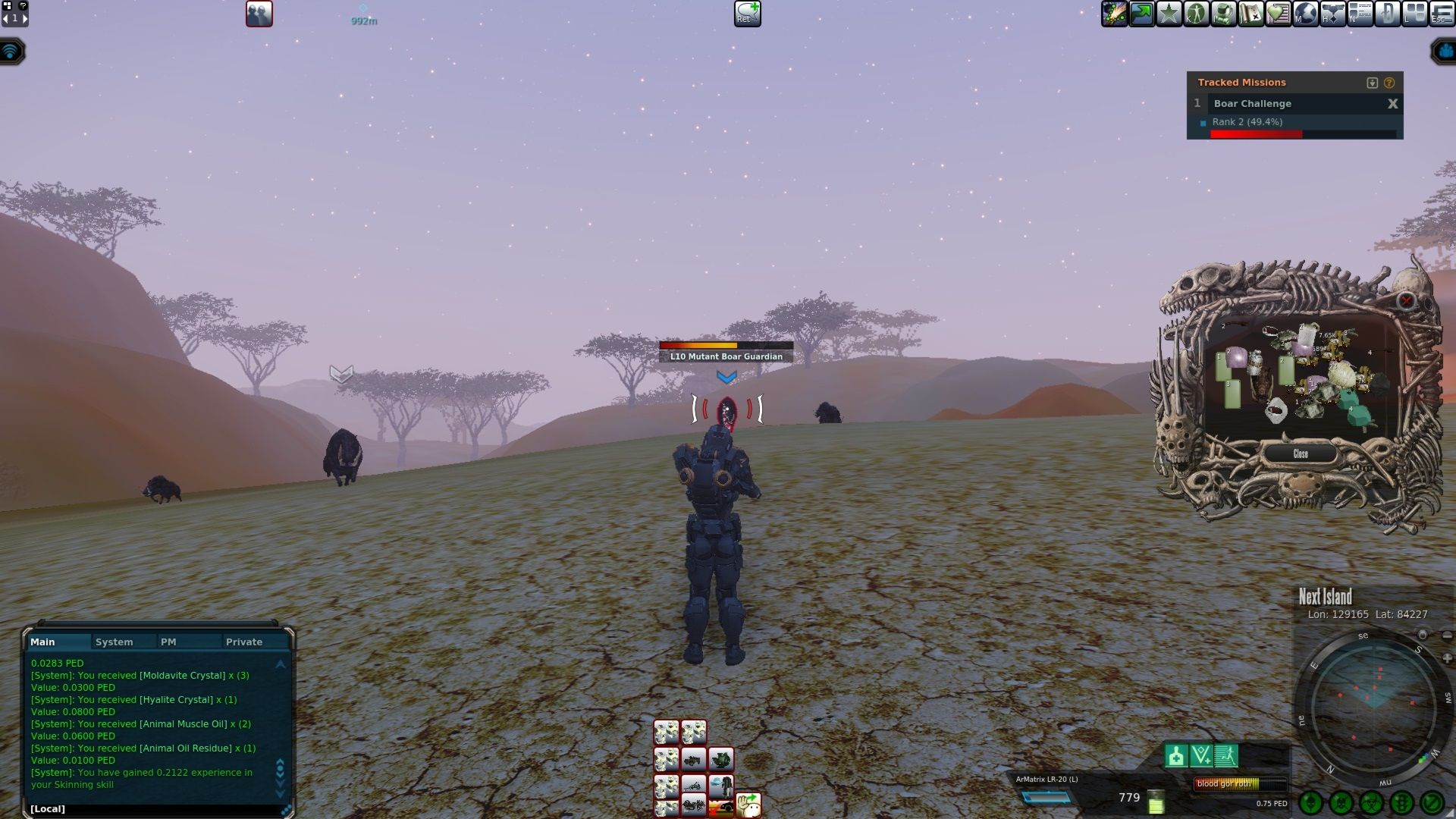 First, however, I need to get a set of base plates. While I could go out and buy them there is no fun in that for me. I rather go out and farm them myself if I could. If nothing else as many of them as I can. That for me is the fun in a game like this.

I ended up looking into quite a few different creatures that can drop the Incision Plates. I was looking for something that had some decent health that I could do a lot of grinding on. I also wanted to try and find something that had a better drop rate of the plates themselves if that was possible.

The creatures that can drop these plates on Next Island are the boars. I tried some of the easier ones such as Village Boar and Mountain Boar. I could not find any soiled info for sure what was the lowest maturity you could get these plates off they were quite low-health creatures anyway maxing out at 180 health for the village boar and 460 for the mountain boar.

I next checked out the Sand Boar which has a massive 2400 health and I could not kill one without dying a few times. The amount of damage they deal my Gremlin with 5B plating is just not enough with the kind of damage and healing I have to survive them.

I then went off to try Mutant Boars. They top out at 500 health and while I have no clue what is the lowest maturity a plate could drop from. I ended up finding a decent place I enjoyed hunting them in with a few of the higher level ones which I hoped could drop them. 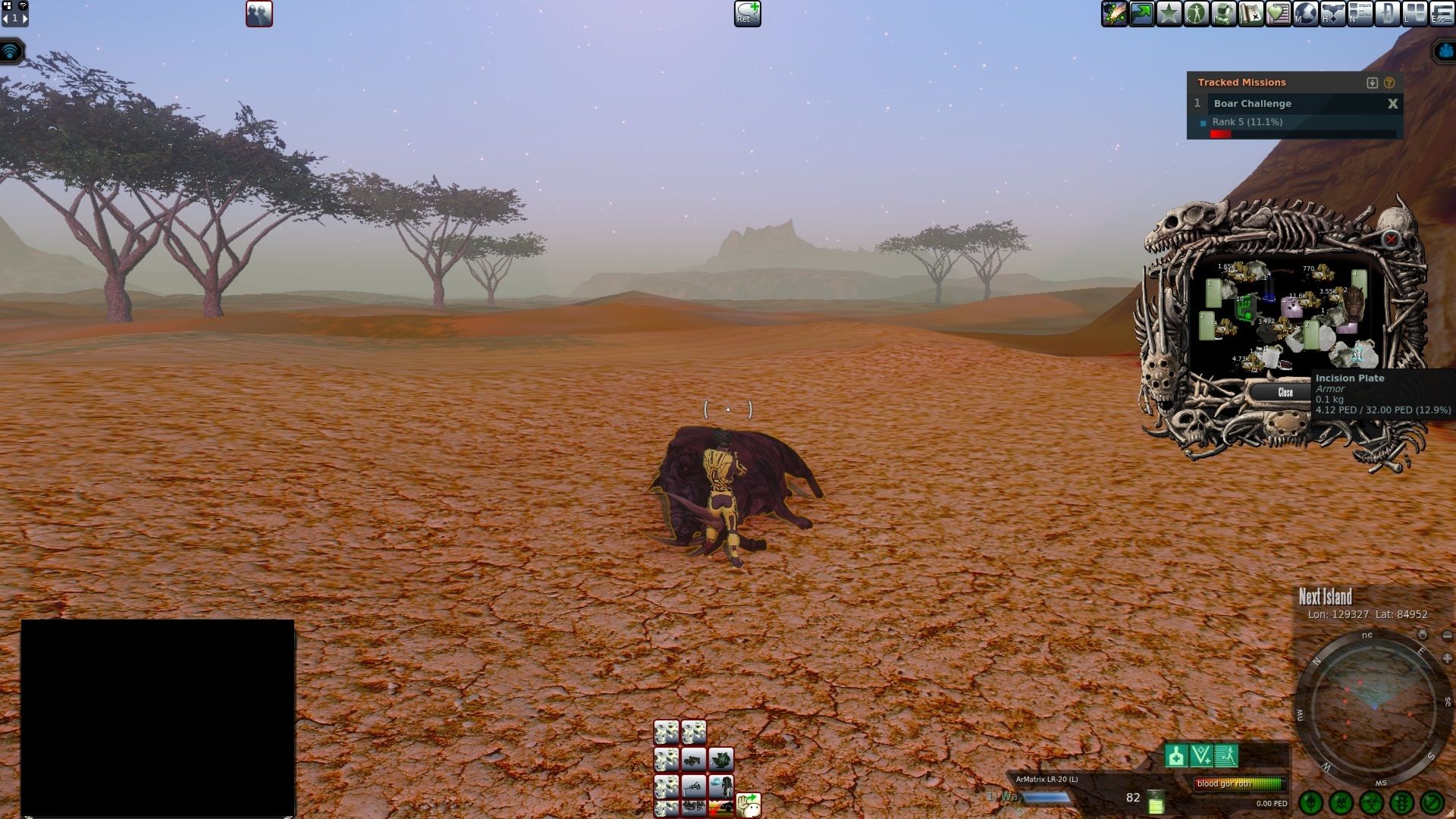 After only a couple of hunts on them, I got my first Incision plate drop. One of the reasons I wanted something with a bit more health is these things can have a fair amount of TT. They are also cheap enough nowadays at TT+ 10 PED or so each that there must be a decent creature to hunt for them.

After getting the first drop I was now hooked on hunting Mutant Boars. I was also having not the worst ever runs on them either. With some of my hunts coming back up enough to want to keep trying them. My biggest gripe about hunting Mutant Boars has to be the large amount of Tier 1 Healing chips I’ve looted. Every single time I see one I can’t help but think “if only that was a plate instead.” They also max out at 7 PED and while they have some markup there is not much volume and at such a low-value auction listing fees cut into the profit.

I also have no use for the lowest level healing chip either. They have more or less become TT fodder to me at this point. I even tried selling a few and I might get a single sale or two in a week. However, not enough to warrant the costs and hold onto them. Not to mention a lot of the time they drop not full TT and since they are limited items they can’t be repaired anyways. 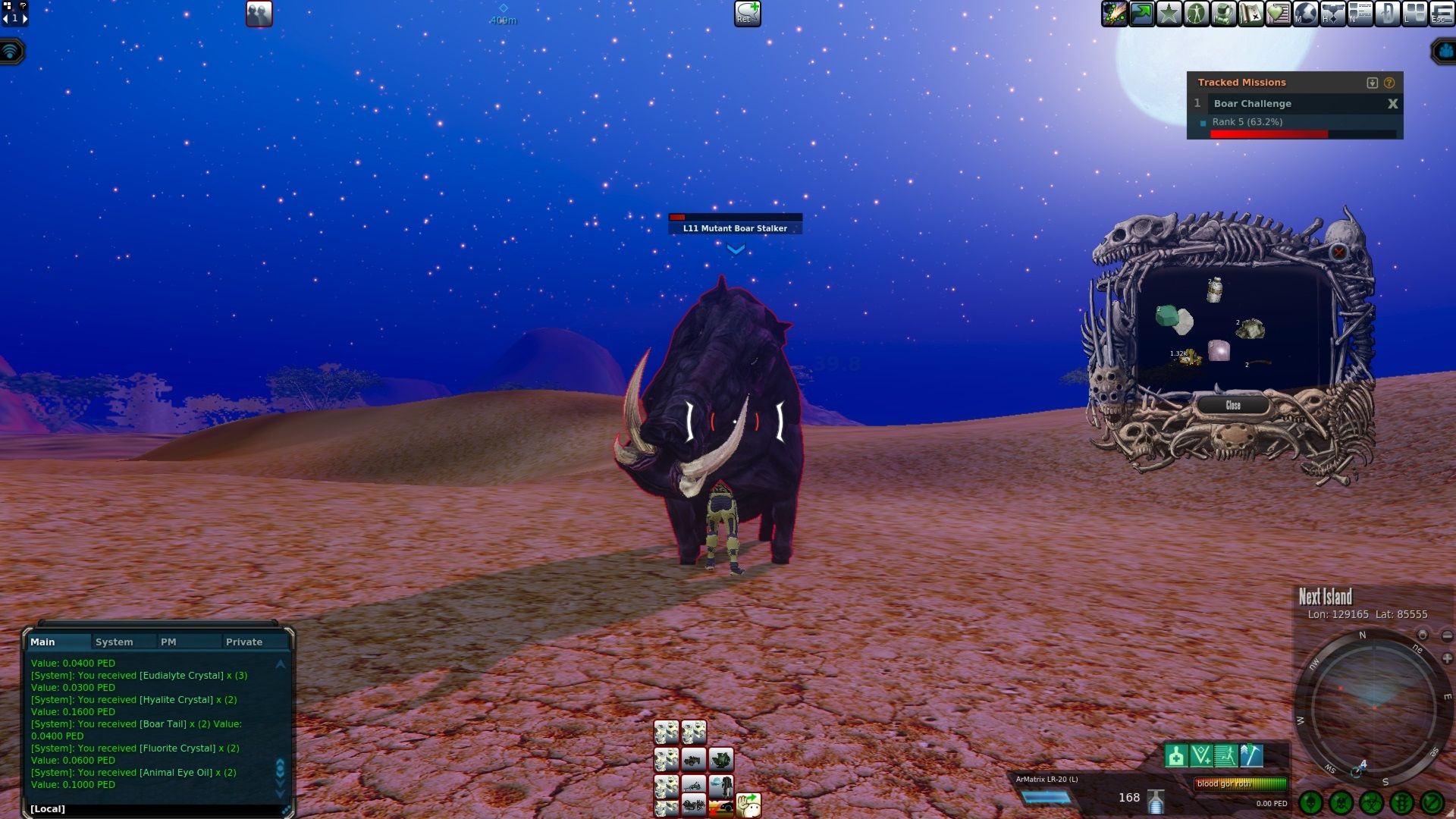 I ended up finding a sweet spot for these giant Boar Stalkers. If anything was going to drop me another plate I felt it was going to be one of these things. They also pack a punch but thankfully they have around 500 health and by the time they get within melee range of me I almost have them dead.

One of the things I was trying to keep track of is what maturity of them I ended up killing when I got a plate drop. These plates however don’t drop that often. Every time I have looted one I had been just grinding out a lot of kills and don’t quite recall what maturity I looted them off of. This is a bit of a shame.

The other thing is it can be easy to not realize you had looted one of these plates. The first one I had looted was not when I had gotten a global. As such after each hunt, I always checked my armor inventory tab to make sure I did not loot another one without noticing.

After far too much hunting on boars. I thought I would try my hands at hunting the creature that drops the hard-to-get ingredient needed in crafting the upgrade. Those would be Advanced Sinew Adjusted. They only drop off Chimera. After killing a few Chimera I had zero luck looting a single Advanced Sinew Adjusted. Getting more plating and hopefully some point some Sinew is going to be some longer-term goals I have. I would be returning to boars quite a few times while I’m at Next Island. There will also be a few other things I’ll need to collect or buy along the way for the upgrades as well. The next tier requires working with New Elysian Order which I’ll have a future post going over unlocking them. Along with needing lesser Elysia, crystalline core, animal musical oil, elysian tech chip, chimera heart, agate crystals on top of the incision plate, and neowave adjusted (that consists of the Advanced Sinew Adjusted I was trying to farm and another ingredient.) 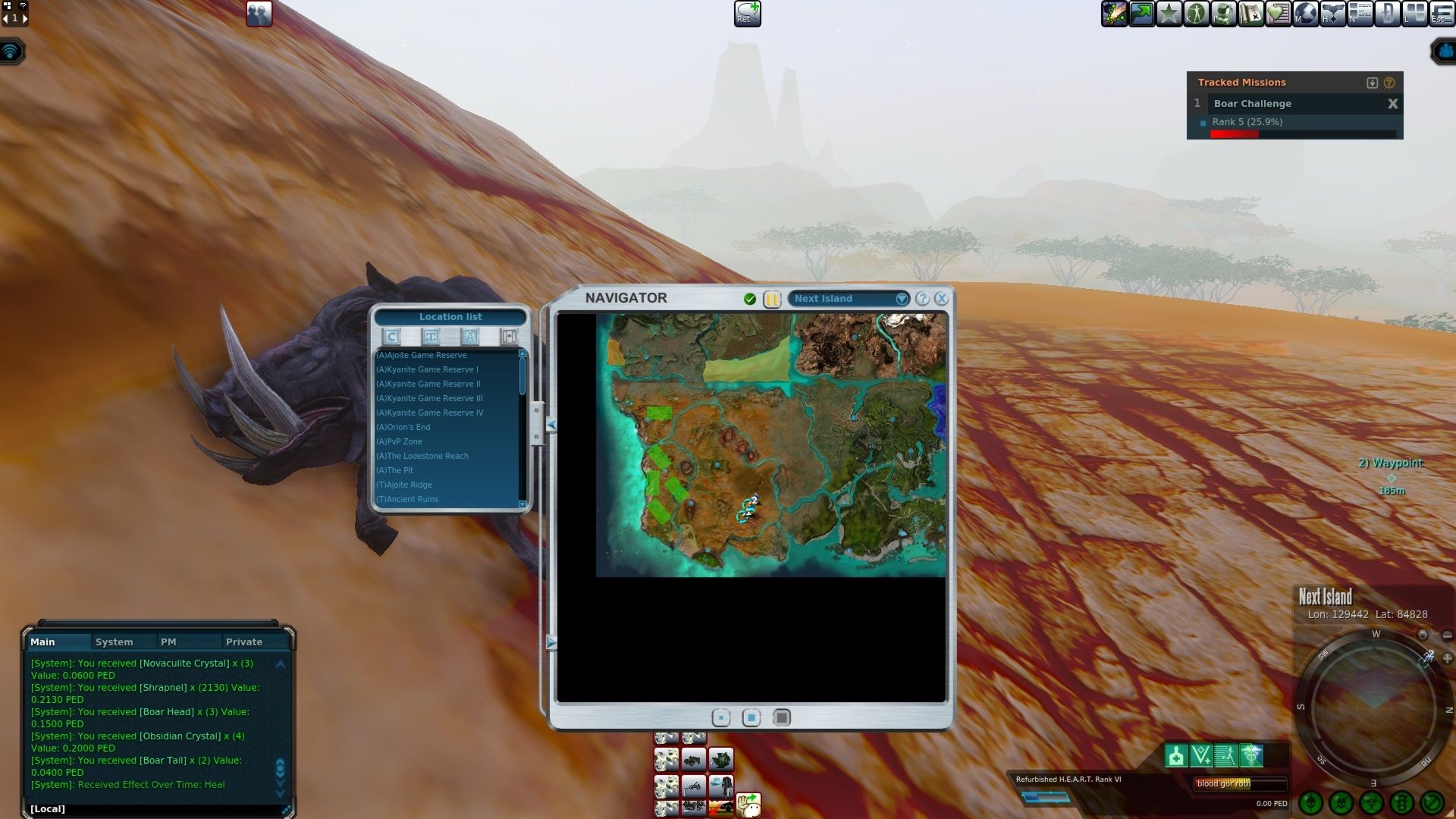 Sometimes it is nice to have a goal that feels somewhat obtainable. If I could get a full set of these plates over the long run and upgrade them a couple of times. That could help me along in several hunts in the future. The biggest catch is the large amount of stab protection these have over the other protection they grant making them a bit limited in use cases.