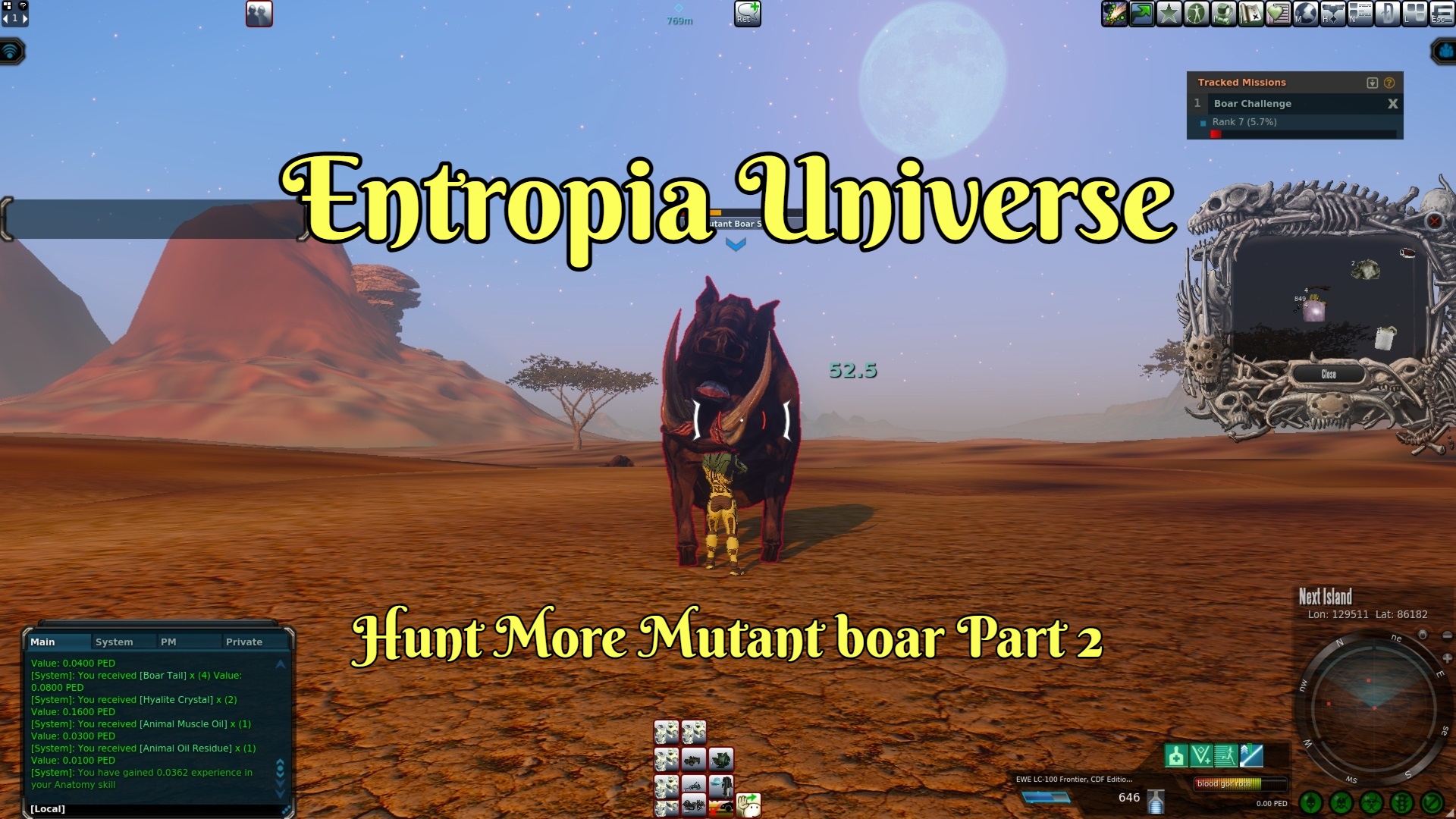 I was back at it again hunting mutant boars some you would mistake for the size of a tiny house. While I am mostly after Incision Plates at this point I’d just take a decent hunting run. Next Island has been a bit rough on me so far.

I headed back out to my favorite spot. Since I saved some waypoint locations of the bounders I wanted to hunt around I dropped them down on the map. I’ve always been a fan of using waypoints to mark out an area I want to be hunting around.

While I could fly to this location from the nearest teleport. I choose to somewhat clear my way. There is a bit of a mountain range I like to run along that contains old maturity and up of mutant boars. Sometimes I luck out and loot a couple of decent size kills. While getting globals has felt a bit rarer than I was hoping since these have a lower threshold to do so than most things I hunt. It comes down to looting plates I’m after in the long run.

A lot of the backdrop of this area in general are giant mountains with strange formations on them. Along with rolling hills and a bunch of trees. Some of the areas I would cross would have no boars to hunt at all. While others would have patches of them here or there. Oddly enough during one of those long walks between the next groups of boars, I happened to look down and noticed I looted another incision plate. I had almost missed doing so and would not have found out until long after the hunt when I dig through my inventory tabs double checking.

This would be the second of seven I would need to complete the first set. I was feeling rather lucky at the rate I had gotten this second one. I had no idea just how lucky. As I would then go on quite a dry rut for the rest of this hunt without looting another one.

This also goes to show just how misleading you can lure yourself into thinking how frequently something can drop in the short run. I had in my mind a certain PED amount of ammo that I had cycled up till this point to have now two of these plates. That number would not hold up in the slightest.

I however marched on killing pack after pack I found of mutant boar. One of the side benefits of hunting these would end up being gaining a lot of progress towards their codex. Boars would end up being the second highest codex I would have on Next Island itself. With a lot more to come if I wanted to get a full set at this point of the plates.

On this day I was not getting a lot of healing chips either. Which made me somewhat hopeful that perhaps the plates were dropping. Entropia Universe can be a bit strange sometimes that you end up going quite a while without getting a certain drop then suddenly the markets are flooded as everyone got a couple.

This must have been a day only a couple of people were getting plates. At this point, I’m just glad I ended up with another one. I was half tempted to go and try out different boar types to see if I would have any further luck. I however felt drawn to this area for some reason or another to keep going on mutant boar.

I ended up circling my hunting area quite a few times. During one mishap I was not paying attention to my health and died. Getting killed is not something that happens to me quite a lot while hunting these. However, there are certain maturity of these boars that have not as high health but seem to just lay down the damage on me if I allow them to get too close which I did.

I decided since I did not get that many shots into that boar and it was going to be a few minutes to fly back to that spot anyways. That I would just clear my way back to that general area. Many times I prefer to clear out a giant wide area than just to keep clearing out the same couple of creatures. I’m rather glad I did as not that far away from the teleporter that also has the revival station I was revived at I got a tiny global. Yet another healing chip I guess they were back to dropping again for me. While the total loot was only 31 PED these boar are quite cheap to kill so that would help out to cover some of the costs of this hunt.

I made it back to my normal spot where I was hunting the bigger mutant boars. After a while, I ran out of ammo and decided to call this hunt done for now. Things seemed to be going decent I was however a bit more hopeful I’d have found another plating by then. 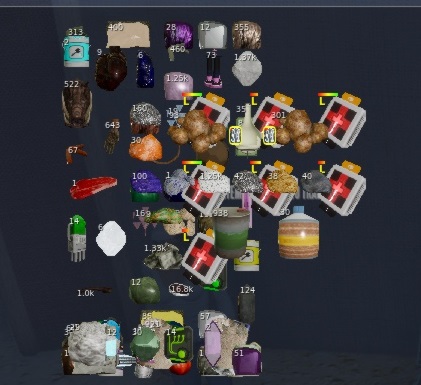 For those that often wonder what kind of loot I tend to get from hunting this is a screenshot, I took from a couple of hunts. This was the collection of stuff from this post, the last one, and some papoo hunts I had done. Perhaps if I hunt these again I'll remember to take a screenshot from just that hunt then just drooping it all together.

Among the sea of healing chips, you might notice the two platings I had looted as well. There is also some mining enmatter and ores as I dropped a couple of probes out there to see what I could find. Overall I’ve done a lot of hunting more than I was expecting just going after some plates.