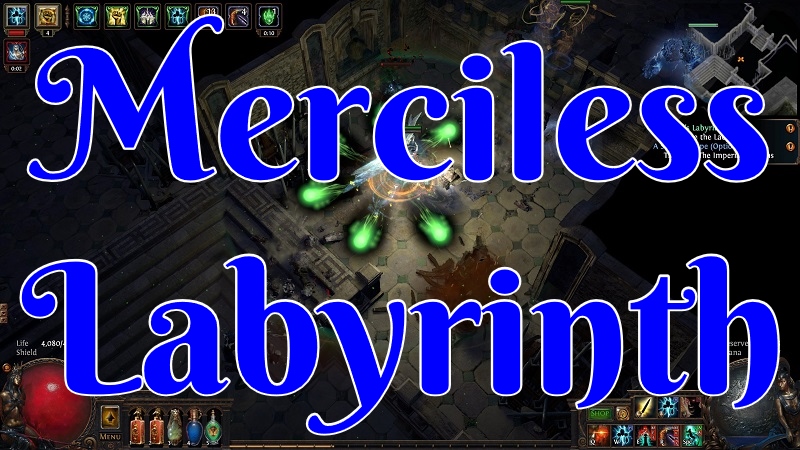 Completed on my Champion Merciless Labyrinth without breaking a sweat in Path of Exile.

I’ve been meaning to get this done sooner. Last week however I died on the final encounter seconds away from beating this Labyrinth on my Champion this league. Since then I’ve been limited on time until today when I made another attempt. 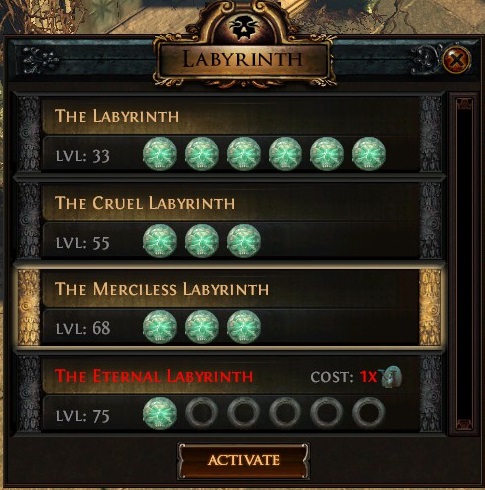 While I’ve spoken and shared about other Labyrinth runs in the past this is a very important milestone for a character in every league. There are four in total and Merciless is the third hardest. I’ve yet to meet all requirements for the hardest and I’m way under geared for it anyways. Which I talked about running the hardest labyrinth called Eternal about six months ago in a different league.

Since I’m not running this Labyrinth for the drops I skipped over all puzzles, out of the way chests and I did not stop for any locked doors for the extra loot either.

With my main movement skill being Whirling Blades I ripped through all the traps, monsters, and maze-like zones in a breakneck speed fashion. While I did not time it I feel this was one of my personal best runs to date. Most times I’m a bit slow of a runner avoiding traps and damage at all costs. With this movement skill, I just click on my heal flasks and moved as fast I could around everything.

For those who don’t know about the Labyrinths in this game, you enter a bunch of different zones (rooms) with a mini-encounter with a boss called Izaro to take down every so often. Until you meet him at the end and have to finish him off. The loot can be ok but I did not get anything worthwhile. 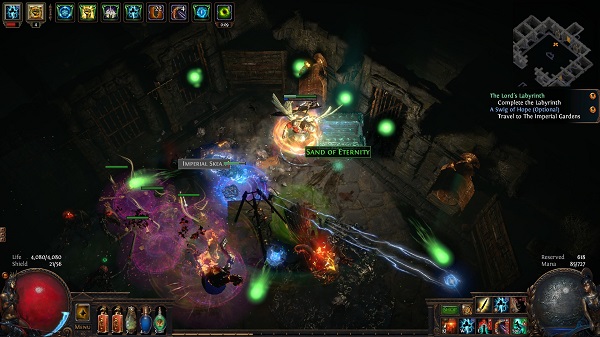 Along the way, you can find chests with forgotten reliquary such as this one. Inside your mini-encounters with Izaro, you have 3 objects, monsters, or portals you have to take down. Having a reliquary lets you instant complete one of the three by only having to click on it or attack at once. Failing to take these out before the mini Izaro hits 50% life and deactivates.

This causes him to become more buffed in the final encounter with anything remaining. While he can be a challenge on his own I, in fact, missed a couple of these on my run last week. As a result, I was one shorted with I did not get out of the way fast enough. 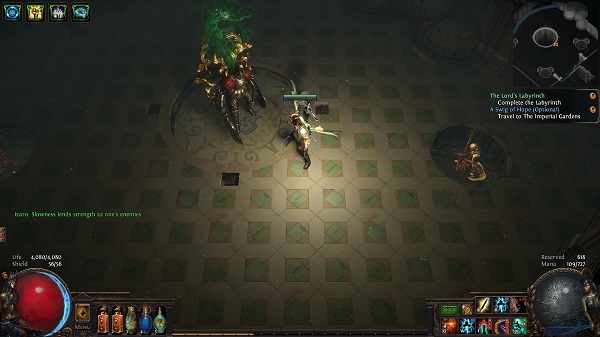 The mini encounter rooms are always similar. He rises out of the ground as we can see him still doing in this screenshot. You can also see one of the three statues I needed to keep removing life from by attacking them before I got him low enough to deactivate and go back underground.

In total there were 2 mini-encounters and I avoided him getting any buffs. Which comes in handy later on when I finally get to the end and need to finish him off. 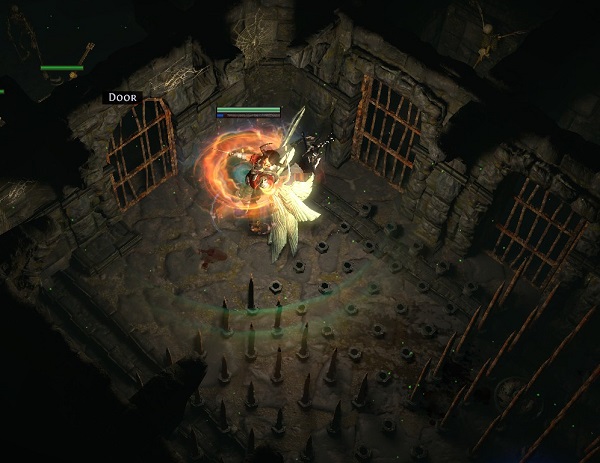 Here are some traps I blazed pasted with my Whirling Blades skill. Getting hit by one of these spikes cause you to not be able to move until they retract back into the ground while also causing damage over time until they do.

I mostly found spike, blade, and passion arrow traps this run. Nothing with fire which I found a bit odd with how many rooms the Merciless Labyrinth. I guess it just wanted to give me a piecing good time. 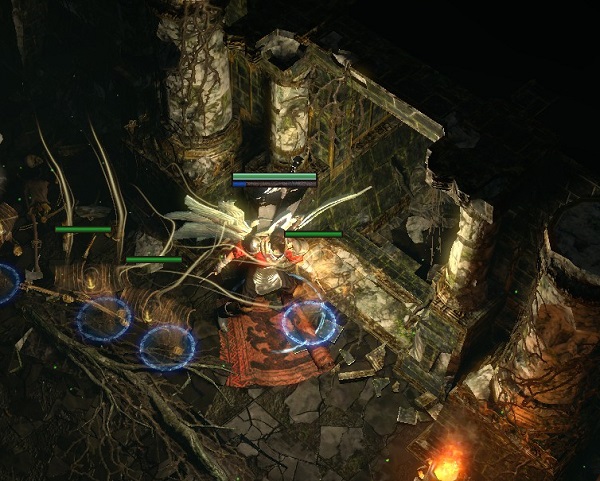 While going fast down one way and hitting a dead end I noticed a room on the minimap that was showing up but had no connection at first. This was a hidden room that requires you to find the lever to lower a section of the wall to get into.

This one happened to give me some kind of reward. They can give buffs this one I had no idea what it did. As I did not see any new buffs and I was in a hurry so I must move on. Sometimes the buff can be powerful enough to really help you with Izaro. This time was not the case. As such I just moved on without much more thought of it. Some players who are running at lower levels and gear will spend time seeking these out for an advantage.

Rest Of The Map

Along the way, I ran into a few choices I had to make. There are many paths that can lead you to the end. I always check the map in a new zone and see where it places me. I tend to go for the longest path as far to the east on the map that looks possible. As such, I skipped over a few zones since I was not here for farming.

I also lucked out and did not need to find any keys to open golden doors that were blocking the path. Every hour the Labyrinth layout changes so most players try and start on a fresh hour and keep running them since they now know the layout. This one was really straightforward and easy. As you can see the paths I took I did a very little backtracking. 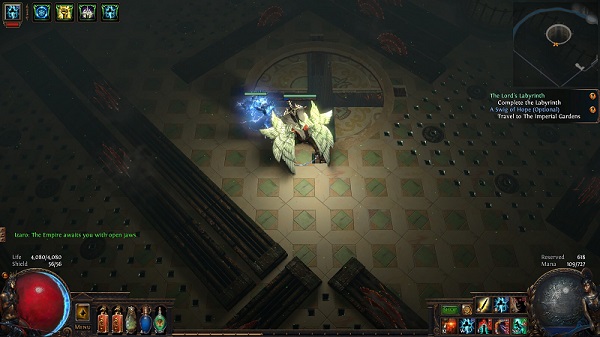 It was a really easy kill in the end. I did not dare try and take screenshots while the encounter was active. Instead, here Izaro is getting ready to rise out of the floor.

The room itself is filled with a bunch of traps from spinning blades to spike traps that you can trigger by stepping on pressure plates. Throughout the fight, he summons you off onto random tiles in the room. I just move as fast as I can avoid as much trap damage as I can.

As soon as the encounter was active I dropped my Ancestral Protector totem to fight him while I was moving around to avoided damage and land some melee hits on him as well.

I had a decent amount of damage and since he was not buffed it was not much of a challenge. 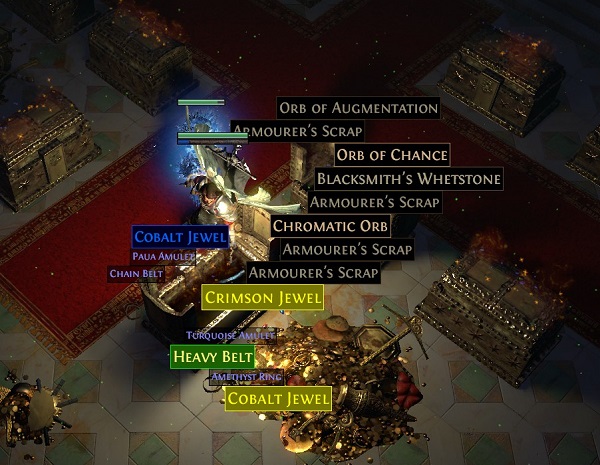 I picked up the two keys Izaro dropped and moved into the treasure room. The two chests I opened were not that great and I had not farmed any other keys for the chests. While many do farm Merciless Labyrinth early in the league it’s been over a month now and the drops are not as valued anymore. Sometimes you can get corrupted items while they can’t be modified with currency they tend to have high socket and links (connections). This tends to be a good spot to pick up a 5-link chest from.

There was also an alter that lets you choose to enchant boots, gloves or helm. The buff I got was some junk that had zero use for me. It had to do with some skill no one uses. Helm enchants can increase the value of an item by a lot if it has high demand. Another reason why someone might run these. Granted the higher labyrinth has higher enchant so these are not worth much anyway this far into the league. 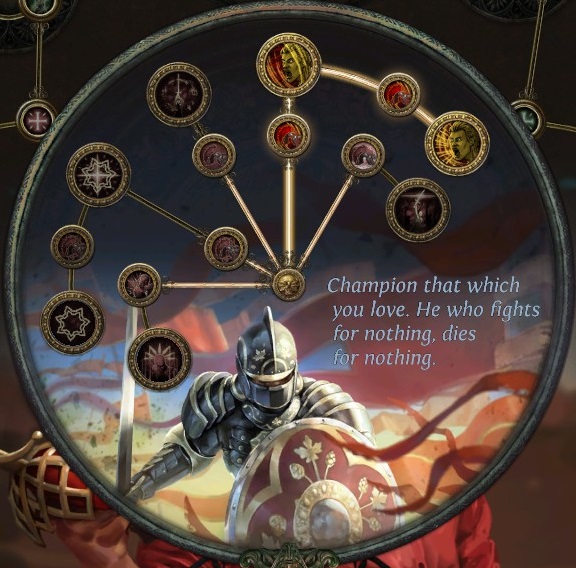 I was here for my two assentation points for beating this difficulty of a Labyrinth for the first time on this character. I ended picking the node Armor and Evasion that gave15% armor and evasion rating, 14% melee damage, and some other stuff. Along with Unstoppable Hero that grants when you have Fortify buff on 10% attack speed, 30% melee damage, and 1k armor and evasion. It is quite a powerful buff when you have Fortify going. Which will help greatly for running maps once I make some changes to my gem setup in my gear.