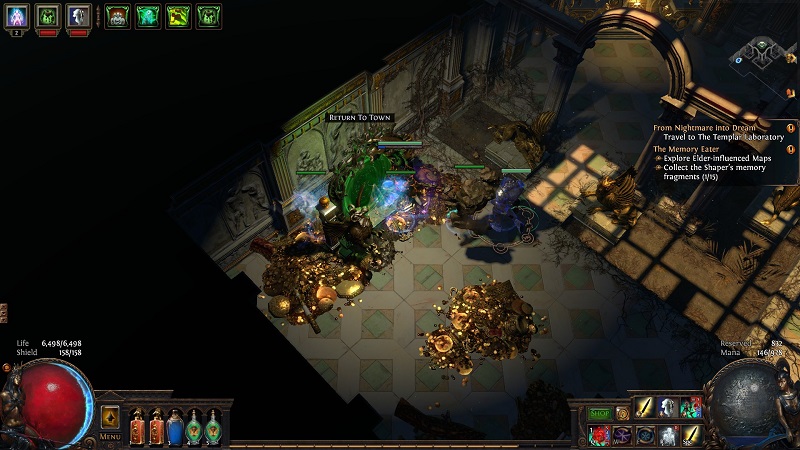 Achieving this has eluded me for quite some time in Path of Exile. League after league I would just fall short of finding one last trial out of out of six just to unlock it. While many always reach Eternal. I’ve always wanted to do it naturally without joining the public help channel for people trying to work together to find whatever the last one they just could not get. Moving forward now I somewhat feel I’ve earned that right to use such a channel if I choose to do so. 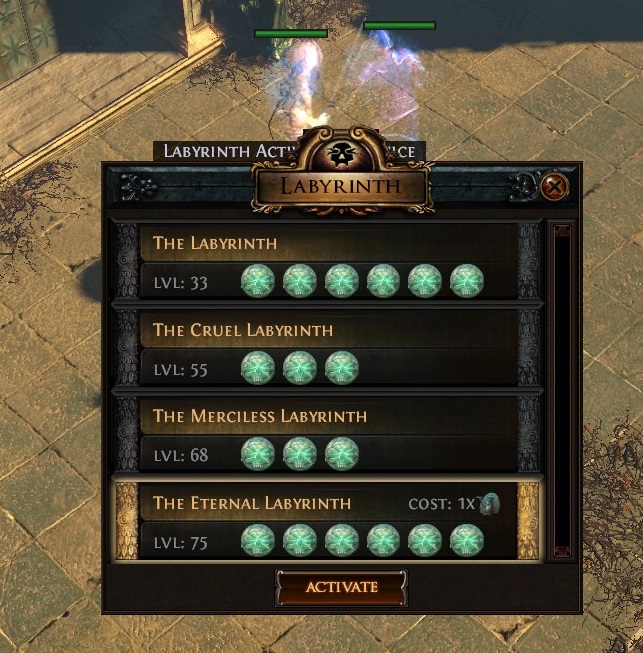 Like the trials required to unlock the other Labyrinths before Eternal Labyrinth they all had their own theme. Expect these each have their own zone and are not found in static locations. You have to run maps and just hope to run into one of these:

Many of these trials are easy to guess if you have played Path of Exile a little bit. While others dear reader I’ll leave your own imagination in guessing what they are. Piercing Truth is a like a maze filled with ground traps where spikes pop up out of the ground in timed intervals. Swirling Fear involves spikes that are attached to a wooden pillar that moves up and down a track often times in conjunction with others forming patterns. Burning Rage has pits of fire and death waiting for you if you try and rush and can’t find the correct switch to unlock a door to safety.

You would think these trials were out of horror film and a few come to mind with that thought. Most of the times you need to time your movement or you could end low in health and unable to burst past a long section of traps that never seem to end. They all are like mini puzzles as you try to go through mazes to find switches to pull. For unlocking doors and progress forward. Opening a portal is disabled in the zone so you can’t even create yourself a safe point. While your progression on unlock doors will remain you have to start from the beginning with one false step.

Every league I would keep getting the same five trials over and as if the game was taunting you. This happened quite a lot this time around. While running ones you have already done still drop the required key you need per run called the Offering To The Goddess. I tend to skip over ones I’ve done before. The trials themselves can take some time to finish and I’ve been known to die in a few of them and lose XP as well. It took me until level 88 just to find my last one!

The one that did not want show itself to me this time around was called Crippling Greif. It is filled with blades that spin up and down tracks on the ground. This one is really not too hard to defeat and get to the end. Most of the times I find myself just able to follow one of the tracks on the ground. Then you make your move to bypass a bunch of them without issue. The hardest part is not getting caught moving forward at the same time along with a blade that is damage you as that will get you killed. Movement skills can really help here if you have a good one to use. Since I use a two-handed staff I’m stuck with flame dash and I hate using it for something like this. 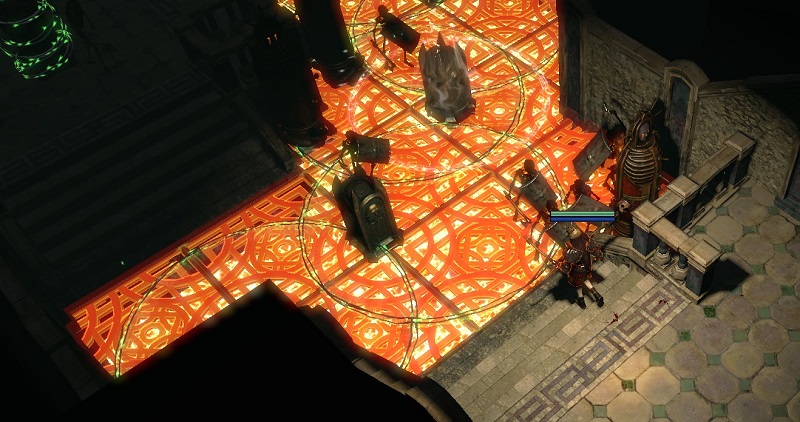 Labyrinth themselves are higher risk and could yield great rewards in Path of Exile. Completing each one for first-time awards you two points to spend on your ascended class which tend to be very powerful passives and even buffs to trigger. You have a chance at some great treasure dropping at the end. You also get to add a random unknown beforehand enchantment to your helm, boots, or glove depending on what one you want the risk. 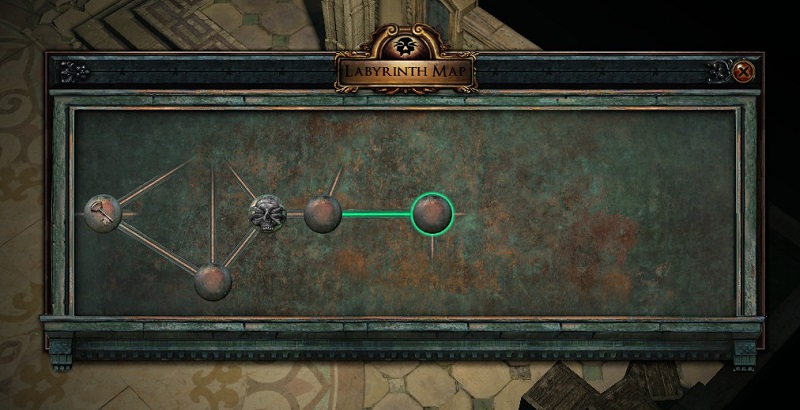 My first attempted run I was around halfway complete when I had a very long stretch of traps to run past. My heart was already ponding at this point. I almost died a few times and I was not quite sure what to even expect during this run. I could not find any shrines inside that would increase my life or my shield to reduce my risk. I was focused on just getting to the end. I even was skipping over extra keys and treasure-filled chests not wanting to take any unneeded risks.

More times than not you do not have time to think you must react based gut feeling and impulse. I could not find anywhere to catch my breath and allow my life to heal back. My palms where sweating, the mouse in my grip was loose as I tried to make sense of the safest path forward. Up to the point where I died and that was it for my first run. It happened not even a full minute after showing where I was within the Labyrinth.

Now that I understood what to expect I felt more confident on my second run. I also had eight or so keys remaining so I was not worried about not having enough attempts. First time around I was thinking this Labyrinth would be totally different since I’ve never done it before. Turns out it's just harder but many of the same things you would see before. Just more traps, higher level monsters, and more zones to go into. They also tempt you with more loot but if you die you drop any treasure silver keys you looted. 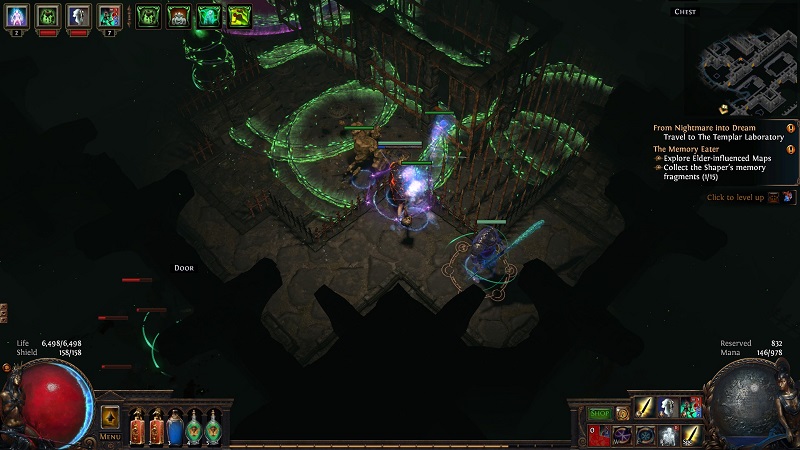 Most of the time I was running into giant sections of traps that had a good chance of taking me out. In fact, I did not and could not stop to get screenshots of them as that would have been my end. As you can see in the above screenshot there are some spike traps along with a totem that causes debuffs when you pass into the green circles on the ground. You can also tell there a purple one ahead as well that has its totem out of view. You can also notice there a couple of ways to go trying to move forward. As it is almost like a maze often filled with dead ends and just one way forward. This would not have been my first near death for this run or my last. 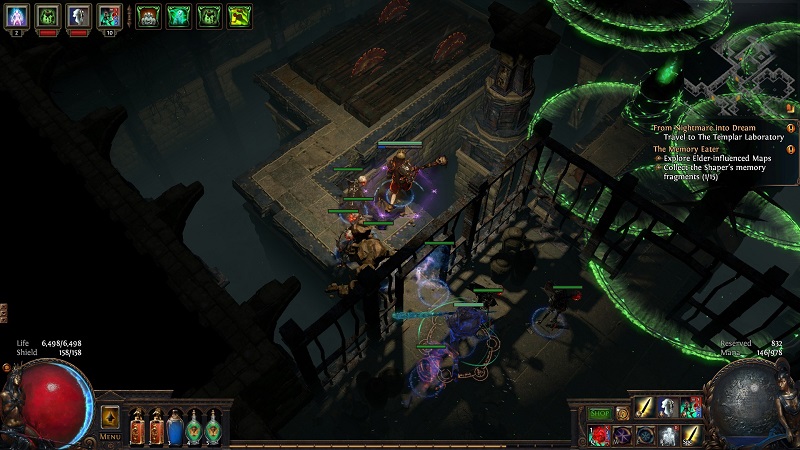 As you can see another giant cluster of traps. It goes much deeper then what you can see from a single viewpoint. Best I can ever do is try to map out a route at the start and hope whatever else is beyond what I can see I make the right choices. I lost count how many times I encounter something like this. This one was not too bad as the blades follow a track and you can pause for a moment to plan your movements ahead without too much risk. As I could take a couple of hits from them without getting killed. 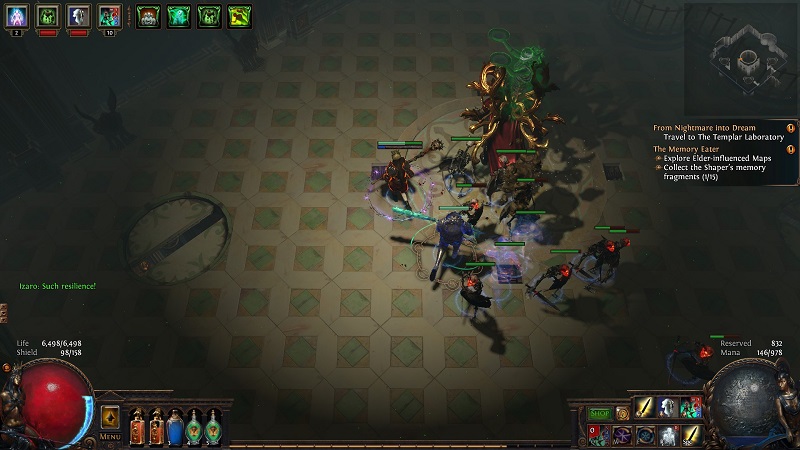 Along the way you have to fight the end boss Izaro a couple of time as he attempts to stop you from progressing deeper. You end up in the room where you either focus on taking out the mechanics that empower him first or you just burn him down for a second key to drop on the final encounter. After he drops below half of his life that encounter ends. He goes back to the middle of the room onto a platform that lowers under the floor for him to escape.

While you can find an item called a Reliquary that helps by instant completing one of the challenges in that room so he is not buffed up later on from that one. I only had looted one during my entire run since I did not want to go out of my way to get them and risk getting killed. Most times you either have to take out three of something so he does not get those buffs. They tend to be in form of portals, statues, unique creatures.

Since I play Necromancer and my skeleton army have a mind of its own unless I’m just spamming resummons it can be hard to get them to target one thing over another. More times than not they killed him before taking out anything that would empower him. I was not too worried as I can just move around a lot and let them do all the work. Most other classes have to stop and cast skills to damage. Once my skeletons are up I can just focus on staying out of harm’s way while keeping them in range to keep attacking.

One of the more interesting things about the Labyrinth is you can’t pull up a map of it overall where ever I like. At the doorways to each room is a spot to check on your progression. They often give some hints about what rewards a room could have in them. For instance, some of the rooms can drop a silver key you use to unlock a silver door for treasure. The circle symbol on a room is for a Reliquary item. That skull looking symbol with closed eyes and teeth showing is for encounters with Izaro. While they don’t hint at what traps could be in those rooms. Least you have an idea when to keep your eyes open for something special. 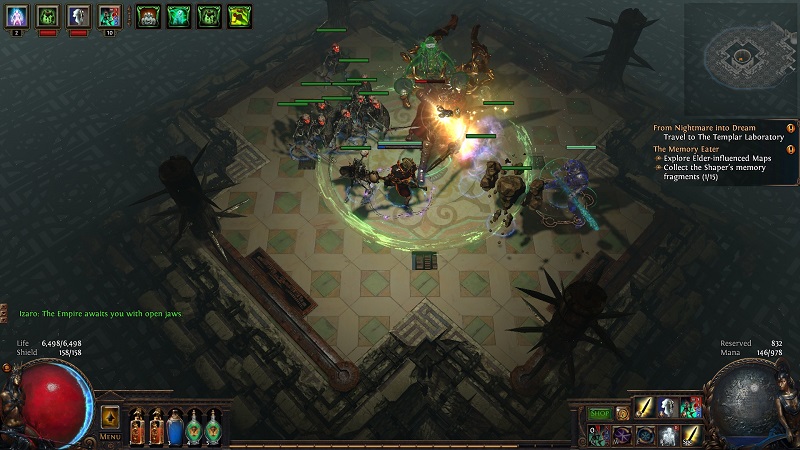 Finally, I’ve made it to the end. Despite this places best attempts to kill me they have failed. I’ve managed to get past all the doors, monsters, and trap that where in my way. I just have this final roadblock. From the layout of the room, it is terrifying, to say the least. Lots of ways to get killed other than by Izaro even. As you can randomly teleport in the room into a pit of fire, on top of a trap, or have adds kill you.

My skeleton army made quick work of him. I just had to try and not die from the fire whenever I was teleported into it. He even had quite a few buffs on him from me failing to take them out along the way. 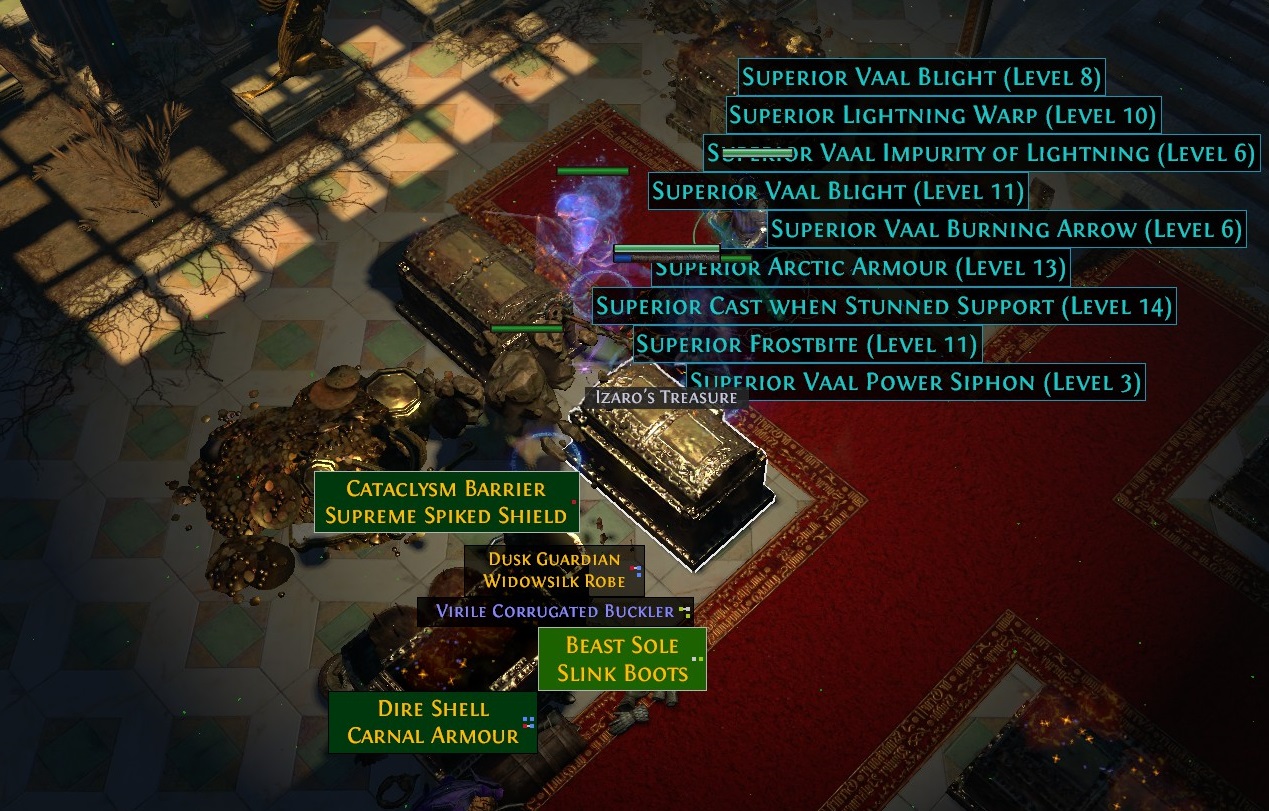 I will admit I don’t quite see what the big fuss is about the end loot. I would rather just do Temple of Atzoatl. I know there a small chance of getting something great it was just “meh” for me. I was not going buy up higher end helms and try my luck at getting the right to enchant on them like many tries. 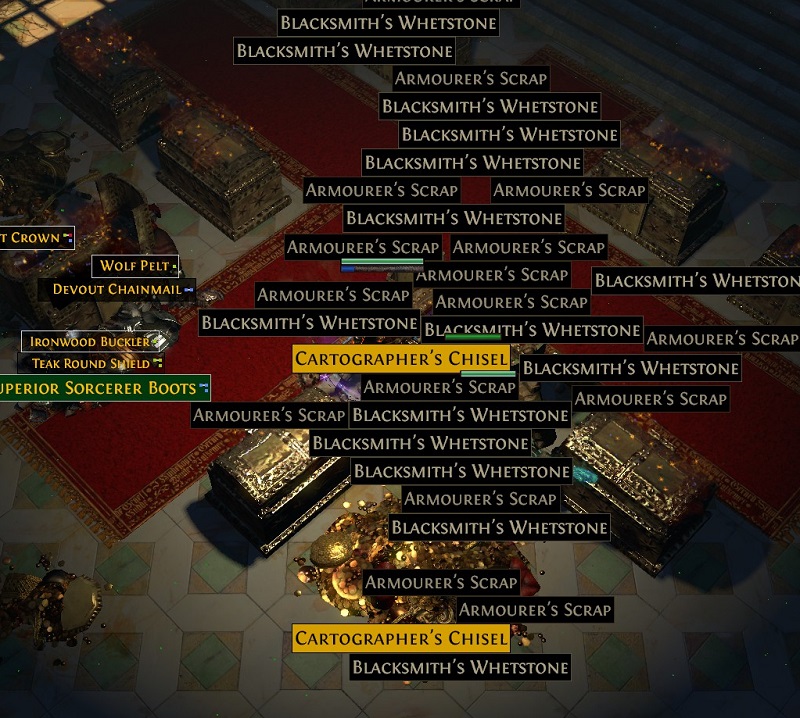 I did run the entire thing a couple of times and this was the best result I got. I can make much more currency elsewhere. Tempted to look into how much my remaining keys are worth in the market. I might be best leaving this place for someone who knows how to maximize the loot. Along with those that like to try their luck at getting a big pay off in the end with a hard to get a drop or enchant.

I am stoked to finally have done this in Path of Exile. This league I seem to be getting further than I have before. I can’t wait to see what other things I get to do for the first time. I’m hoping 100% completion of maps among other things.