I ended up finding several things I’ve been on the hunt for. It was only a matter of time before I found another city in Delve for some nice map drops. After that, it was off to run some Grand Heists for a drop that will help me gain even more loot moving forward. Finally, my first scourge map was ready to be run. 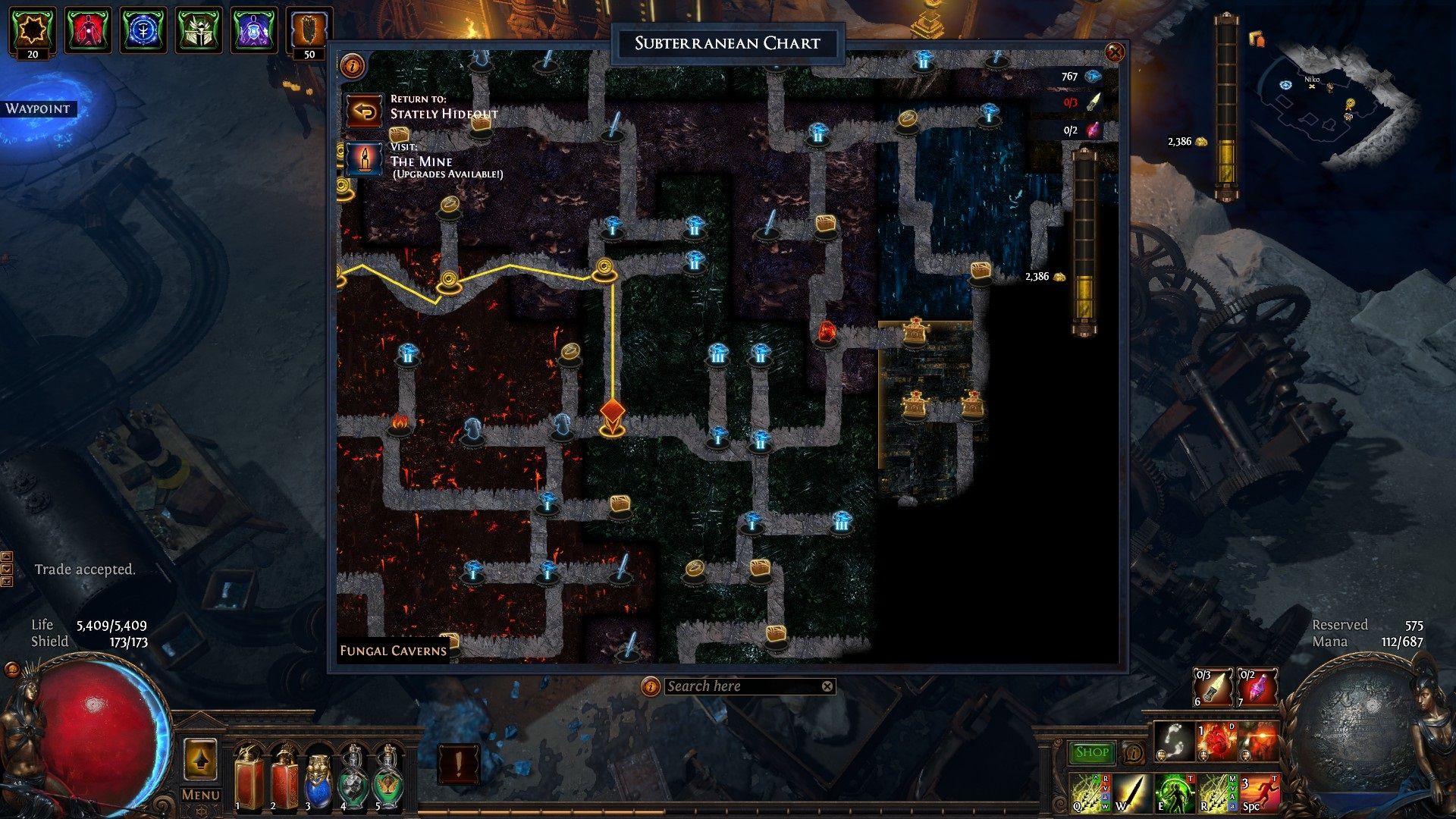 While moving sideways in Delve on the map trying to find a more reasonable path down with some useful nodes to clear on my way I finally found it. A decently sized city within the mine that is deep enough to drop red tier maps if I happen to be lucky. 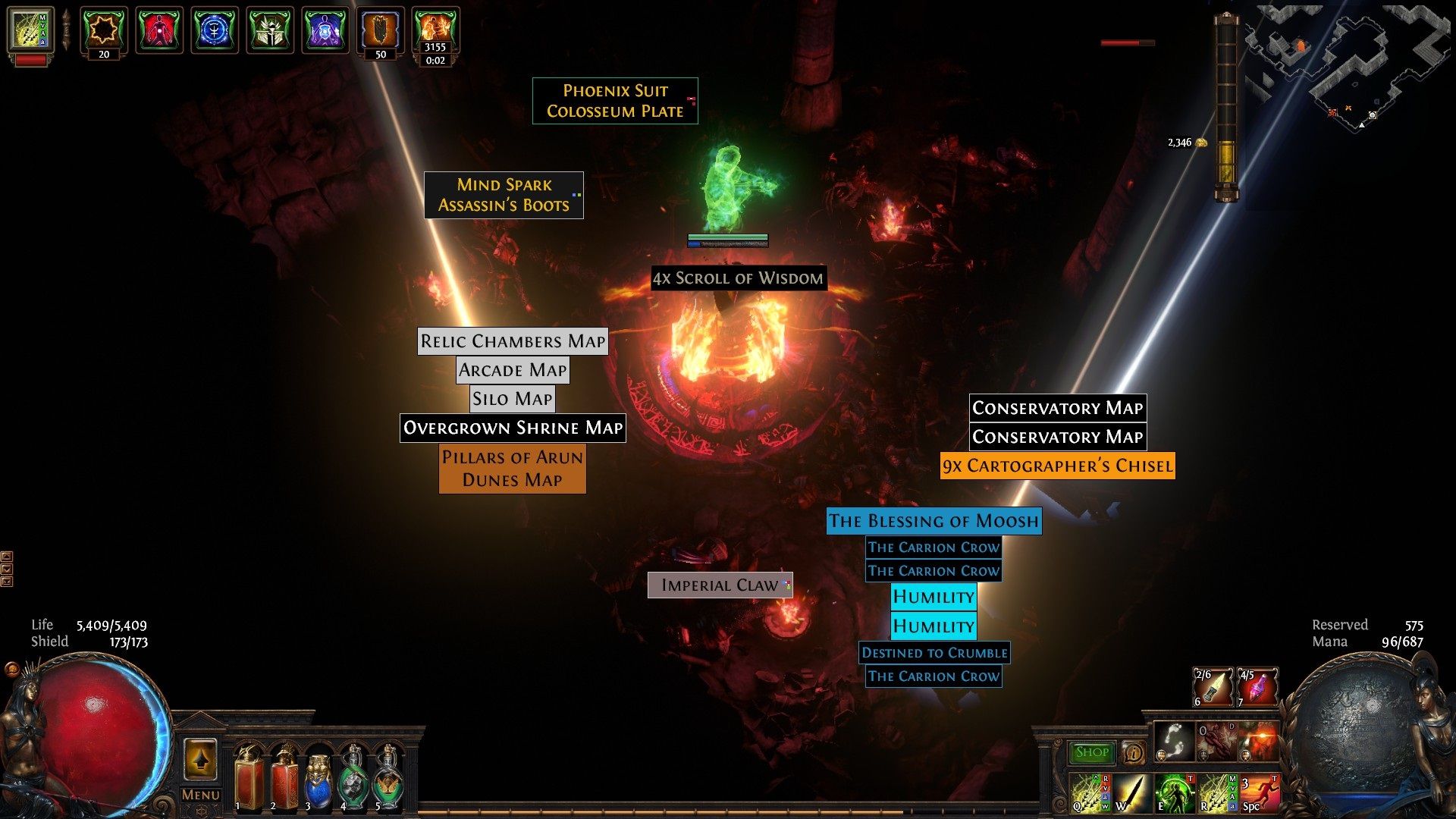 The city ended up being a little more spread out than I would have liked. I did explore some of the darkness to see if I could find a wall to knock down to connect things without having to go the long way around. However, I had no success in that. Regardless it was nice to find five chambers to raid. 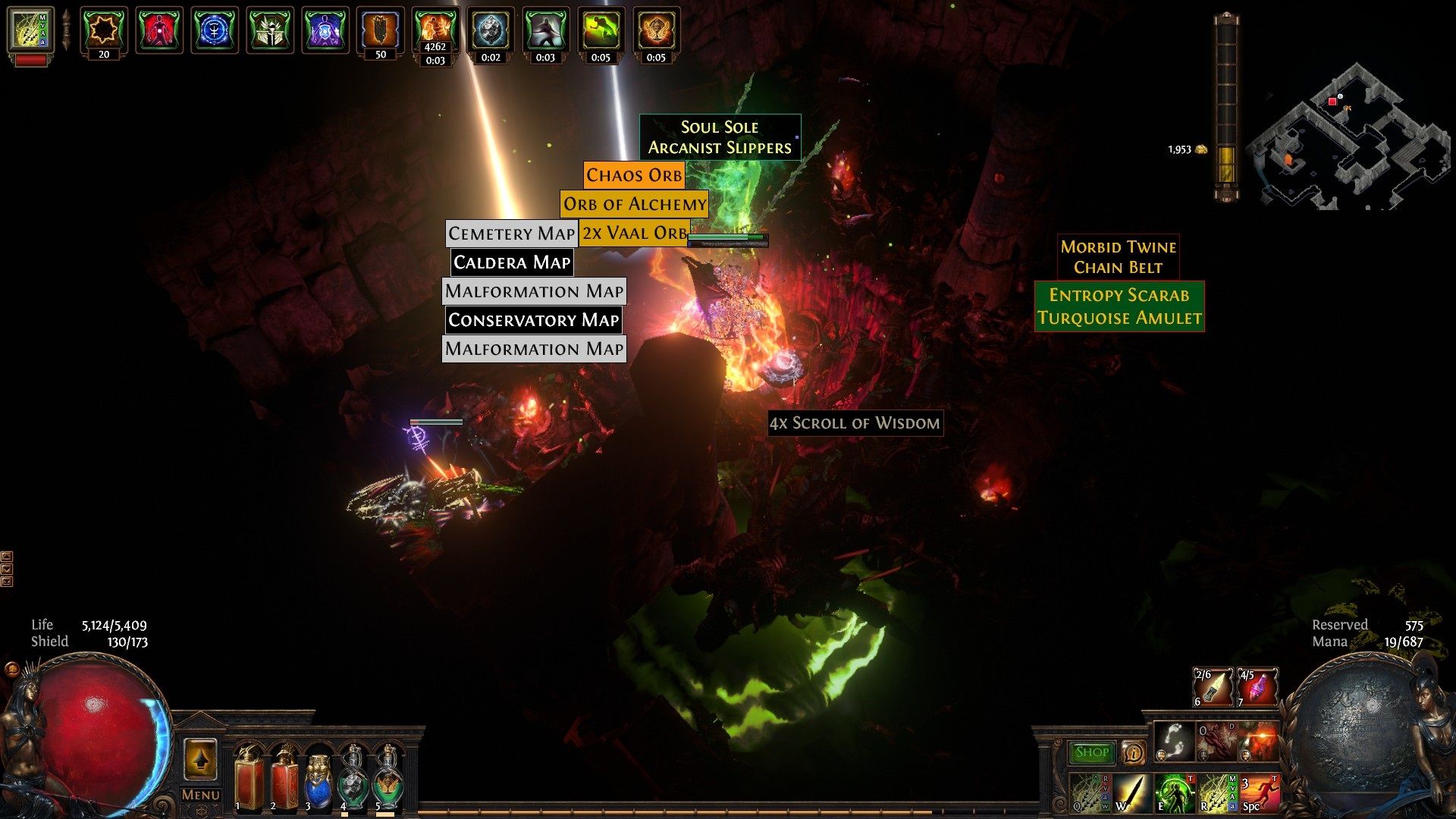 I did not have enough Sulphite to get to all the chambers in one go. I would run one or two of them and then go back to running more maps till I got more Sulphite. It was rather nice to break up the map grind somewhat.

After running all five the most valuable thing I ended up looting was the tier 11 to 13 red maps with a bunch of lower ones as well. Out of the 25 maps that dropped including one unique I ended up with 14 red maps. This will give me quite the boost in trying to become sustainable in the red map pool. Every day I would run at least a couple of normal heist missions to gain more experience for my crew. Along with hopefully unlocking a new crew that filled other job roles in the heist missions so I could pull off a grand heist and steal some amazing loot.

The time had come that I’ve accumulated 9 Grand Heists that I wanted to run a couple of them. At least for the ones I ran I had enough people to do them. Since you are purely stealing for yourself during these there are no coin rewards and you are paying for everything yourself. Thankfully I have a stockpile of 25k rogue markers to afford to run a few.

Since I had some coin to burn I ended up paying for more rooms to be unlocked and an entire secondary heist to run after the first. It’s a bit of a strange set up the way they do it in this game. I’m sure I still have a lot more about the system overall.

During the “planning” phase the different NPCs I hired would talk with each other. There seemed to be quite a few inside jokes that I was not quite in the loop on. Along with other banter between the crew. It’s the little thing like that which adds to the overall depth of things. You got a feeling they all know each other rather well. Once you start the mission you get put into a starter room. This starter room I always found a bit strange that you had to walk down and go to another zone for your heist. Now that I see in grand heists where you can have more than one to run. It now makes sense for doing I that way. I ended up running the one on the left first.

I ended up making quite a huge mistake in the first one. I was not accustomed to there being totem “alarms” that increase the alert level you have. After attempting to kill the first one and realizing my alert level was sky rocking I quickly speed past them and kept a more keen eye out for them.

This place ended up being quite huge and I was more concerned about triggering the alarm before making it to the end to see what kind of loot awaited me. As such I ended up not taking much risk and arrived with some unused alert level. 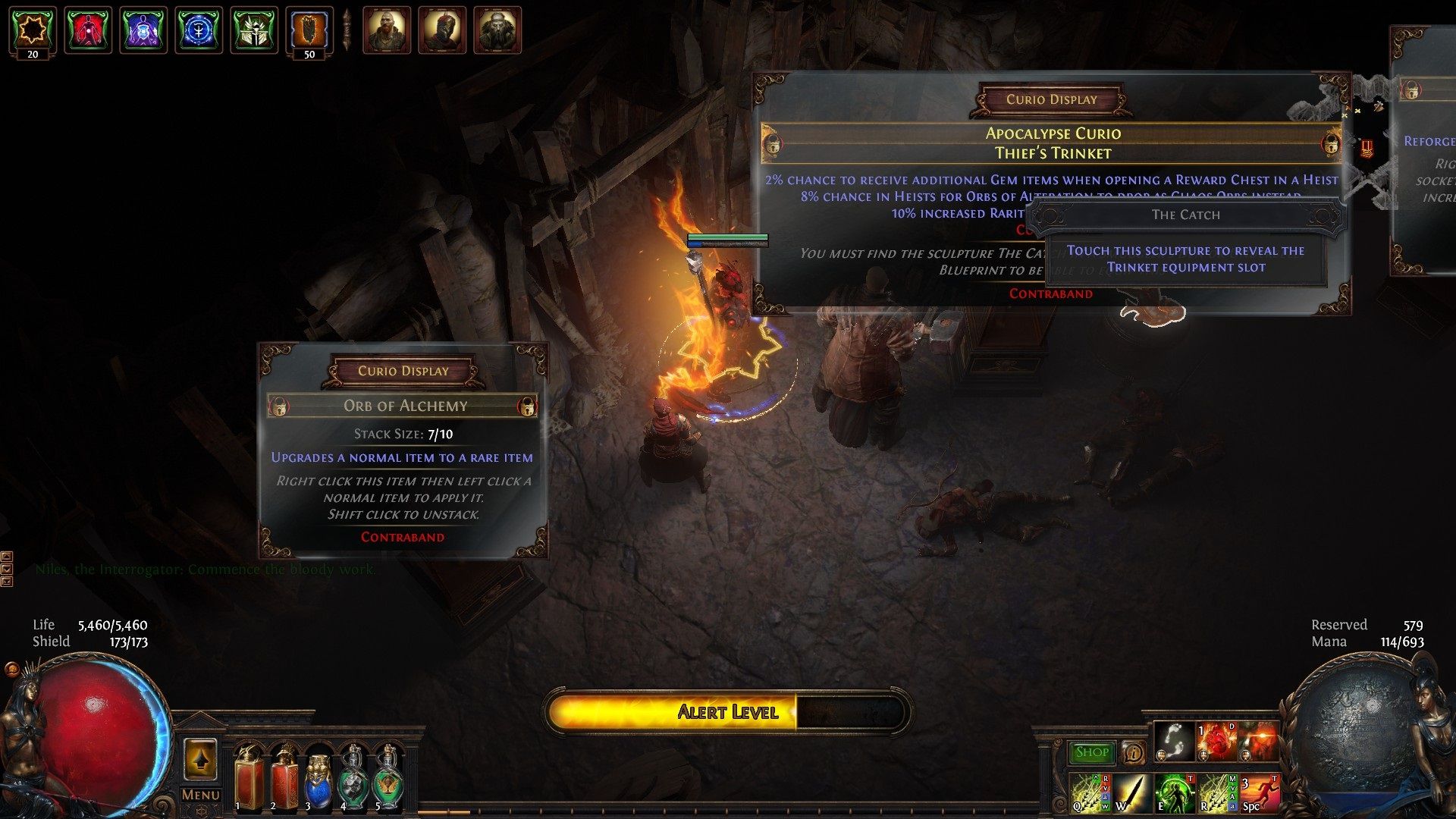 I was rather happy I did not take the risk and mess up failing this one. In the end, waiting for me was an unlock for the Heist trinket slot. Since you can only steal one of the items before triggering the alarm I ended up skipping over all the currency rewards and selecting a Heist trinket for my reward. After that, it was time to head back and breakthrough many barriers of locked doors trying to keep you in. While the zone spawns in lots of monsters to kill you. I escaped alive and moved onto the second Heist area.

While the rewards were not that amazing in the second area I ended up hitting a lot more loot. This time I did not run into anything that increased my alert level. In the end, there was a case with 5 chaos orbs in it. While not amazing it looked like the best reward to take.

After that, I made a run for it. Before I knew that grand heist was done. I went running a couple more without anything insane dropping or worth talking about. These are at least something I want to explore more and will be in the coming days.

As far as the trinket I ended up looting. While I don’t care for the more gems dropping as most of the time they are trash. The chance of getting more chaos orbs to drop seems like quite the boot. The item is also corrupted so you can’t attempt to roll something better. It was finally time I ran my first scourged map. I’m rather glad my first one was just a low-tier map just to see what they are all about. I have been avoiding for the most part information about them. As I wanted a true first-run experience.

While you can take them up to tier 10 I stopped on the one I was leveling up in my blood crucible at 4. You get both positive and negative stats on them every time they level up. Sometimes they can stack and increase a stat while other times they will roll something new onto the map.

I was rather concerned by some of the negative things I was getting. Between the take, less damage, and 20% regen of life per second on monsters I was rather thankful this was a low-tier map. If this was a harder one I might not have had the damage to take down rare monsters for the drop.

The special drops you get only happen once you are in the nightmare. Since it was a low-level map getting two map drops per rare kill while in nightmare would result in just low-level maps. While getting scarab drops to put into my maps for future runs sounds like a winner to land.

The biggest issue is how I’m able to trigger the nightmare level that you move in and out of. Once you are inside the nightmare it works as if you had collected enough blood for the max amount of time before you shit back over. The issue is I would only auto-shift from killing rare monsters in the normal world. Creating very few opportunities to get into the nightmare part of the map. The build I’m running is not that fast or high in damage for clearing. It is a lower-level map that helped a lot. I had to make quite mad dashes trying to find rare monsters for a short amount of time. It ended up not being that rewarding which is kind of what I expected for the level of the map. It was quite nice being able to run several things I wanted for the day. With cities in Delve having a higher chance of spawning in Delve I’m hoping it’s not too far before I find my next one. I have more Grand Heists to run and I hope the loot will be much better. Not so sure about scourged maps but I’m working on leveling up more of them.