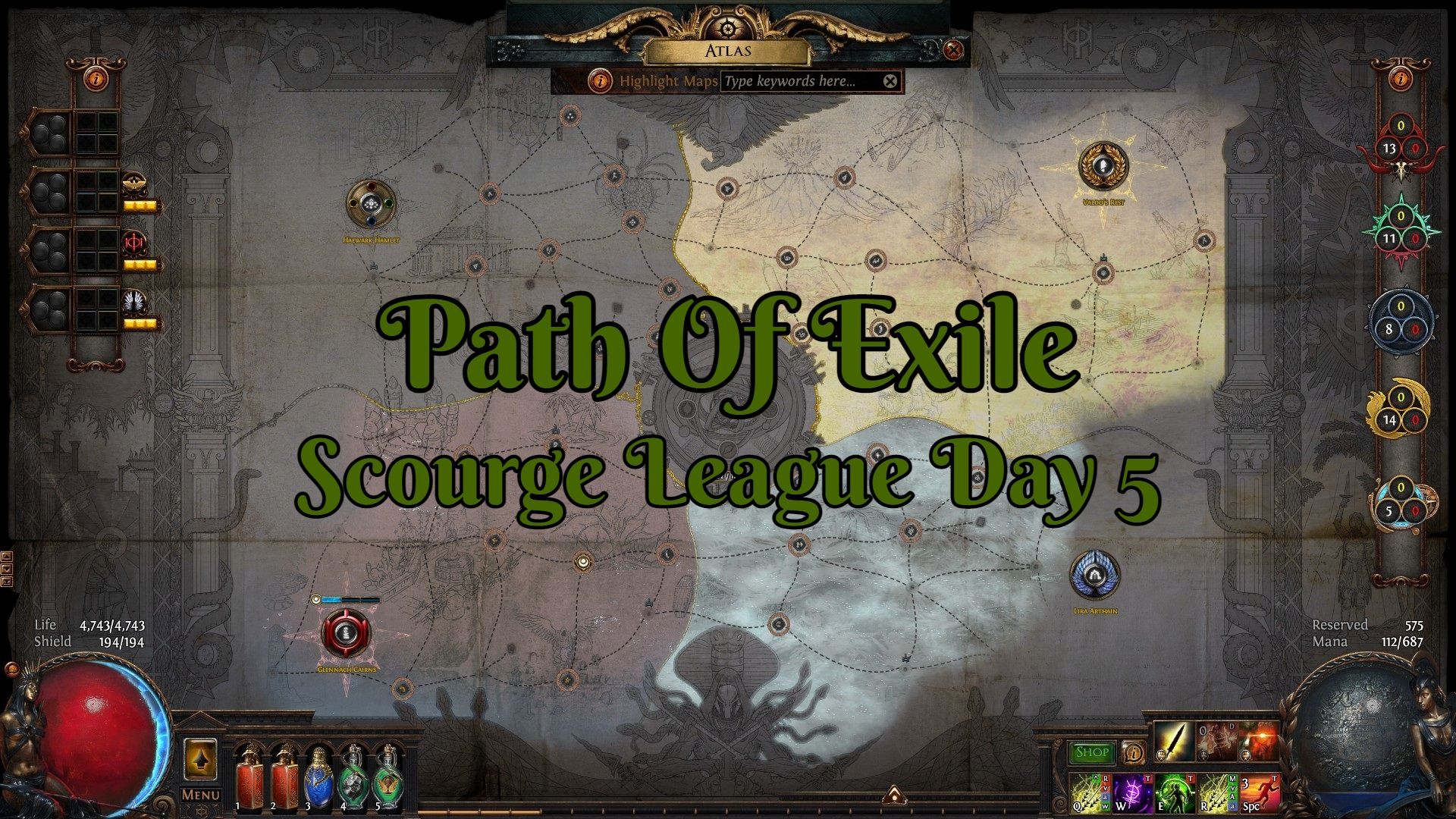 Things are now starting to move along. I ended up running quite a lot of different maps. I bought a massive bow upgrade that I’ve been needing. I also finished off my last labyrinth run among other things. 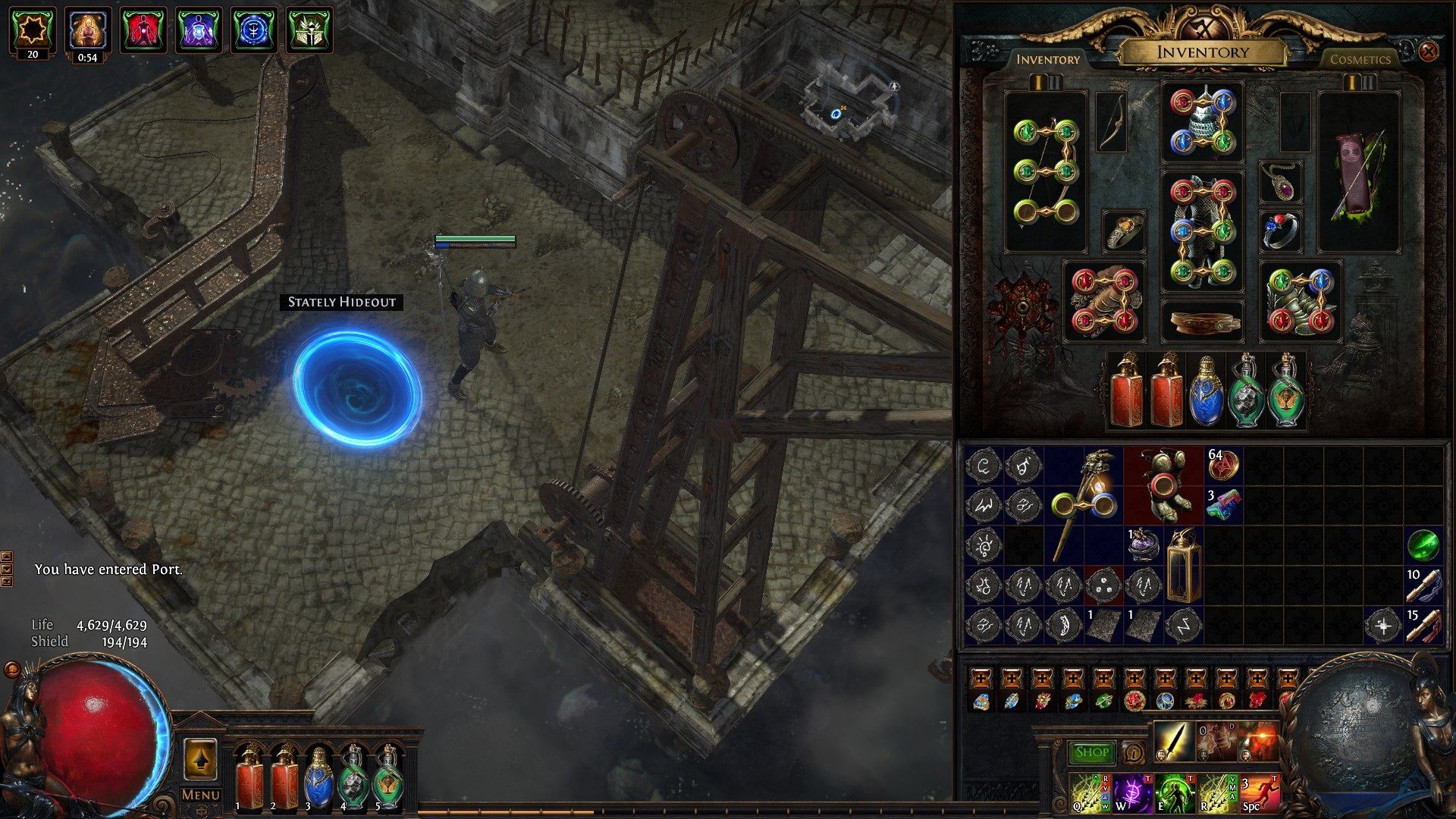 Since I gave up the idea of trying to target farm a single map for one drop it was time to start running all the ones I had collected so far. This involved just loading up my inventory with quite a few and preparing them. That way I could run maps back to back to back only stopping when I needed to sell or offload items to my stash.

Over the years a lot of changes have been made to the Atlas for mapping. I’m willing to admit I rather enjoyed how it was set up years ago. At least for now till I get a better handle on things. There are a lot of things I just don’t know much about.

I ended up turning in one of my Watchstones I looted increasing a region of the map levels. While I have another one to turn in I’m holding off for the moment. Till I at least get a better understanding of the system and the maps.

Seems like every other map I enter into there is always something new going on. I had Mavin show up which I knew nothing about. These NPCs popped in giving me warnings and telling me to bugger off. I knew they made a huge overhaul to the system a while back and I did not play in that league. 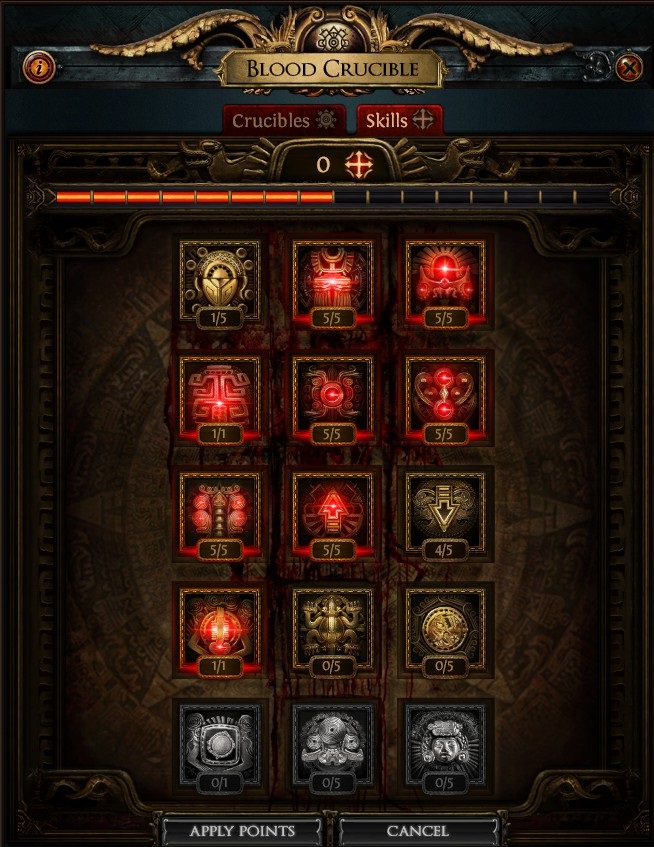 I have mostly been focusing on the Blood Crucible if I’m not close to leveling. It can many times be quite rippy and there is nothing worse than dying right before you level up. It looks like the last tier has some interesting things to select. I’m hoping the experience will pick up speed again once I venture deeper into higher levels maps.

I’ve cleared up to level 6 maps. While that is not that great yet being a few days now into the league. I did lose some time messing around along with trying some new things. There is always a learning curve when returning to a game like Path of Exile. 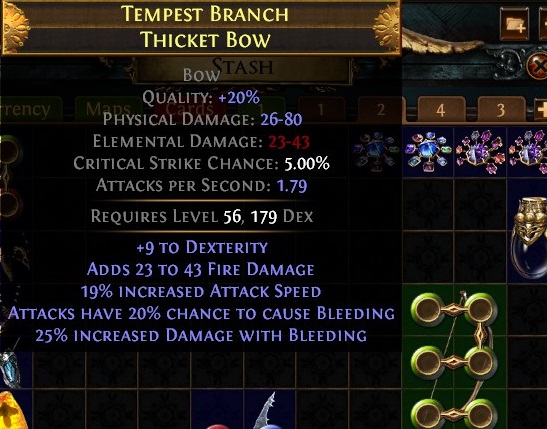 I’ve needed to get a new bow for a couple of days now. I had the currency I just needed to land trade for one. The competition for bows is quite high and more times than not I’ve been always just too late.

While some higher-priced bows are similar to what I want that sit unsold for quite a long time. I was willing to wait since I was running level 1 and level 2 maps. That however started to change once I started to move onto harder maps.

My old bow lacked a lot of the basic things I needed for my build to move it along. The only thing it had going for it was all that attack speed. I will miss how fast it was. However, the increase in the amount of damage I do now was worth the tradeoff. My new bow which is a 5-link comes with a few things I needed. The plus to skills is quite nice. Along with increasing my chaos damage over time. The biggest downside was the base of the bow itself having a lower attack speed than I would have preferred. The seller however had it priced to move and I knew it would not be remaining on the market for much longer if I waited.

I had already missed out on getting a few I wanted for the day. It's at least nice to pick one up before someone else beats you to it. It seems at the very high-end game of things for bows that prices are just going up like crazy. Glad I got this to hold me off for quite a while.

Getting Started In Delve While the build I’m using is quite a tank I’m not certain if it has enough damage to do well down there. I knew they made some changes to how challenging the deeper depths become. So far it’s not been quite what I was hoping to experience.

A lot of times when clearing to the next checkpoint I’m not killing things as I am just trying to go as quickly as possible not getting killed. It takes a moment for me to apply the damage I need to clear and by then the crawler has moved up a fair amount.

For now, I got some of the basic things I needed to be done. I needed to use my Sulphite since I was hitting the cap and I’ve focused on farming Azurite. With Azurite I can increase my darkness resistance, light radius, and increase Sulphite capacity. Which will at least make it easier. One of the nice things, since they have increased the chances of finding cities, is I had one spawn along the catchup route the game placed. It’s also can an ok monster level that I would still find it worthwhile to run. Perhaps with my next batch of Sulphite, I’ll investigate it further. I’m usually used to running my last labyrinth (lab) sometimes many weeks after league start or longer. Since I always preferred to find all the challenges you had to complete to unlock it myself without the help of others. In this league, they have changed it so you only needed the goddess token to enter.

I’m rather glad I waited till I had a new bow to run this. I’m rather used to walking into this thing with a lot more damage than I had. While it was still double it was a bit slower clearing through it than I would have liked. Up till this point, I was super lucky in my other labs to not run into a golden door. They require a gold key that you have to get from a side area. Those side areas tend to be one giant maze trap of death. If you are going rip on a lab run at least for me that is where it’s going to happen.

Things were going decent till I hit this pocket. There are three levers I had to trigger to unlock the final room with the gold key in it so I could advance. I ended up getting to the last lever and that is where I discovered I was a bit in a bind. I ended up double flame dashing to safety with just a sliver of life left. That ended up being the most challenging part of my lab run After that, no near-death experiences to get the heart pumping. Izaro was not that much of a challenge since I did not mess up giving him any buffs. I even tempted fate to get this screenshot before my final hits landed killing him.

This is one of those things I’m glad to have over. Maybe I’ll have some Eternal lab runs in my future for enchantments. I’m not quite sure yet. I rather like how they make it easier to hopefully get something useful. 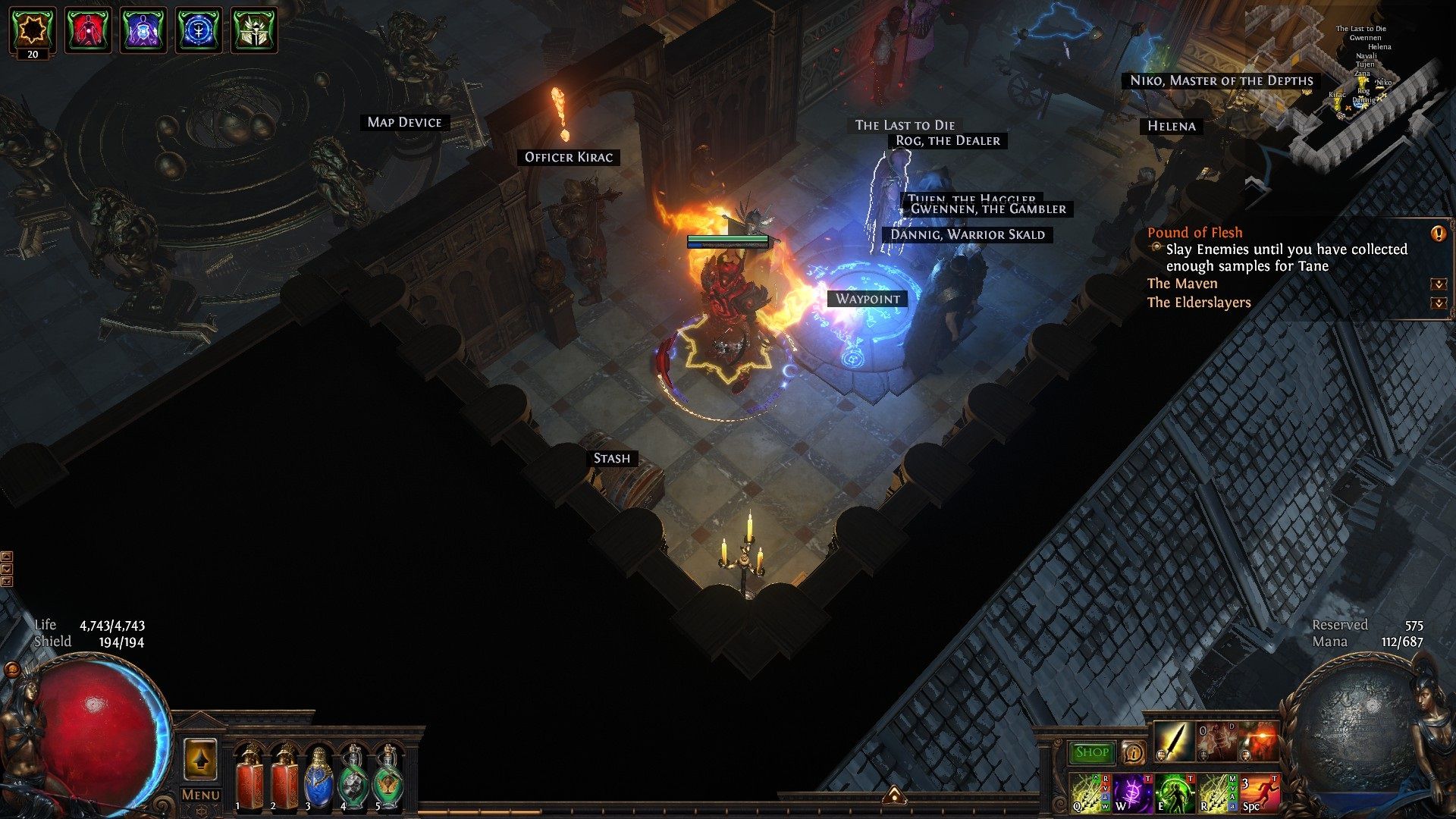 I ended the day by getting around to equipping my cosmic armor. Not sure if I’ll be keeping it around as it has some impact on performance. It was at least a fun day accomplishing a lot of needed things.