It has not felt like a week but it sure has been. It was time to head back down into the Delve mine and revisit what I left behind. After that off for more grinding on Atlas maps for the bonus. I also worked on some improvements to increase my survivability and damage. 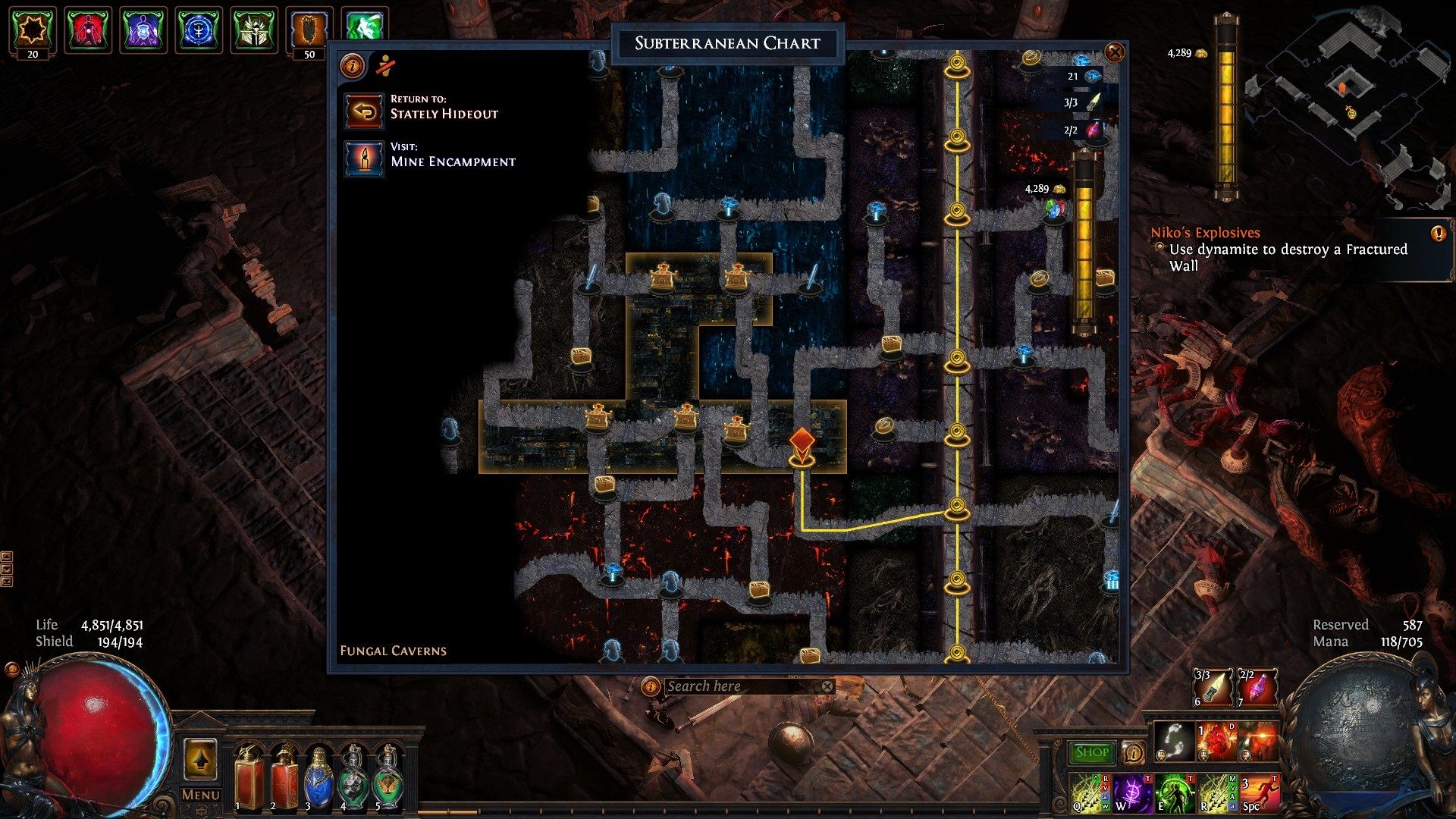 Back on day 5, I had mentioned I jumped into the Delve mine to see how deep the catchup mechanic would take me. I had lucked out and not far and only a few depths shallower a city was discovered.

While the city itself had six ruined chambers to explore. I was not expecting the loot to be anything outstanding since it was around monster level 70. You best believe I was not going to leave that behind though.

I at first had to do a little more Azurite farming to increase my resistance to the darkness. That way I would last long enough running through the dark sections of the chambers where the treasure waits to be looted. 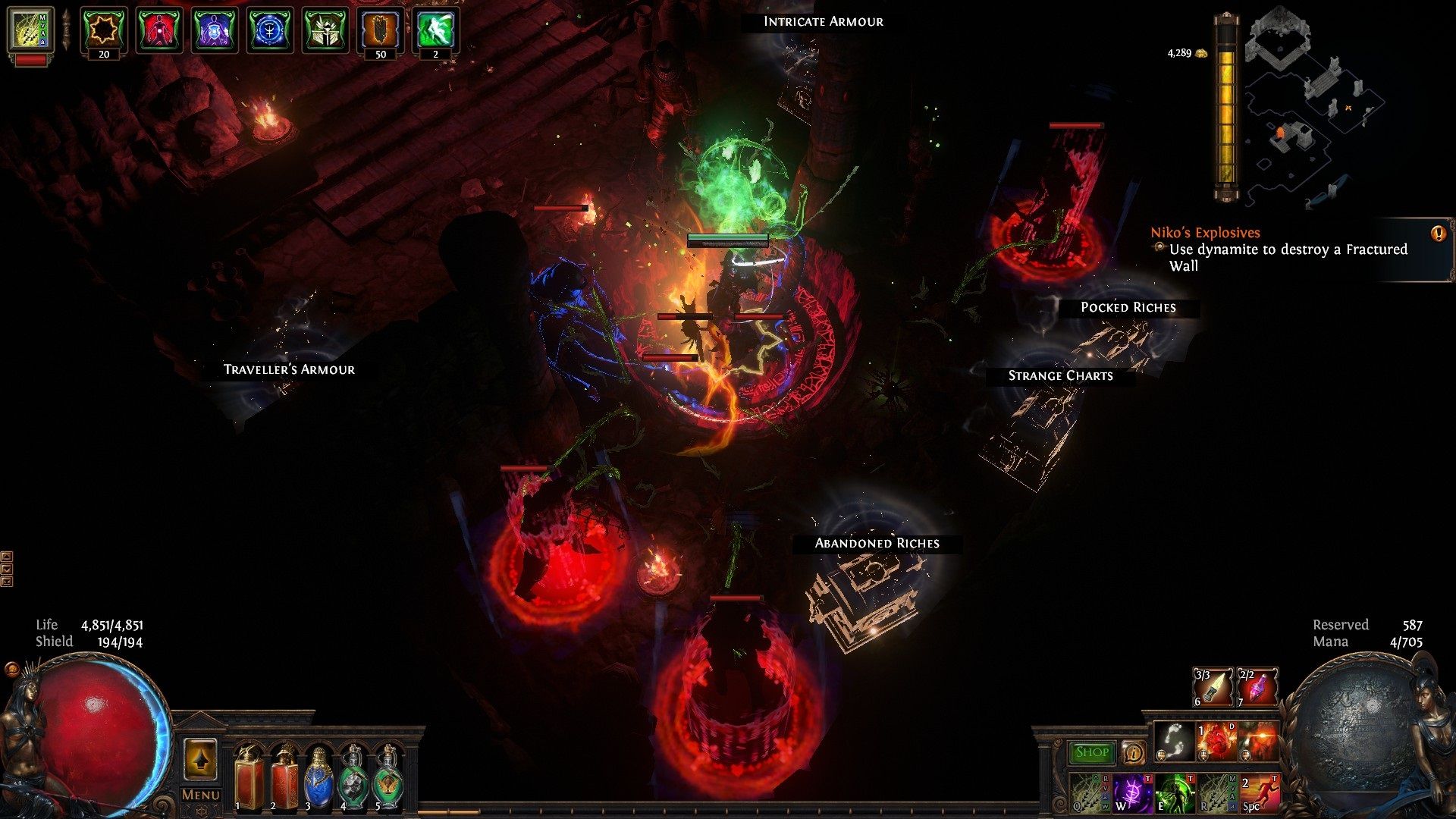 Each of the ruined chambers has two treasure rooms in them filled with all kinds of boxes. 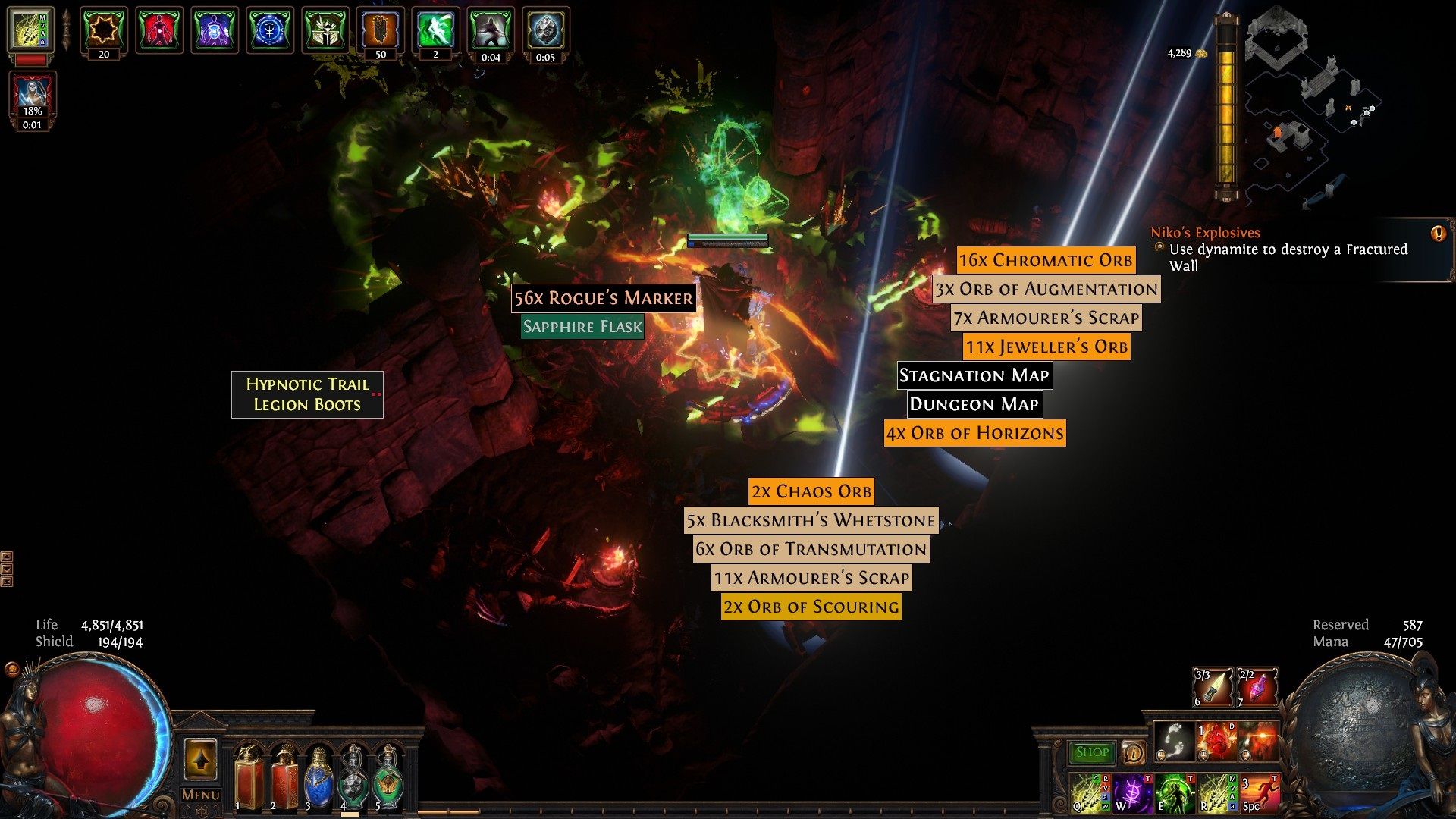 They are quite fun to open and watch the loot explosion of goodies littler the floor. Meanwhile, you have to fight off monsters spawning in trying to kill you. While one could sit around and try to clear some of the ways. With my gear, level, and build I did not get closed to getting killed. Once you leave a ruined chamber you are unable to re-enter them so dying is not an advisable thing. I had quite a lot of chests with maps in them. I must have looted over 50 in total from the six different ruined chambers. Since this is around the starting level for maps they were all quite a low level. While my main character has no use for them who knows if I’ll make an alt at some point and they will come in quite handy. 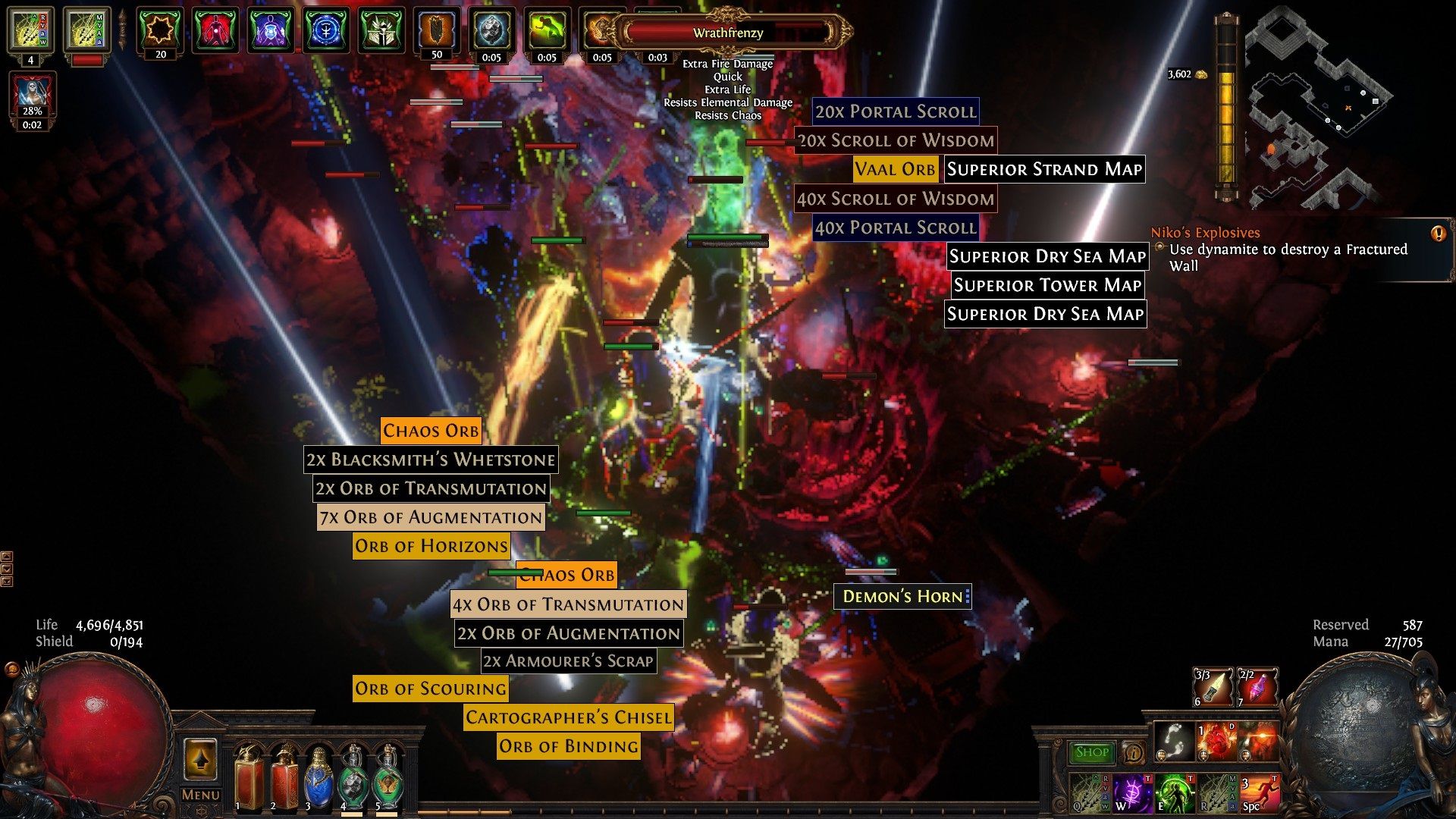 Being a bit of a packrat and hating having to buy scrolls from other players. I was quite impressed with those massive stacks of wisdom and portal scrolls. Their value however not so much. I looted maybe 2 Chaos worth out of all the ruined chambers worth of scrolls. 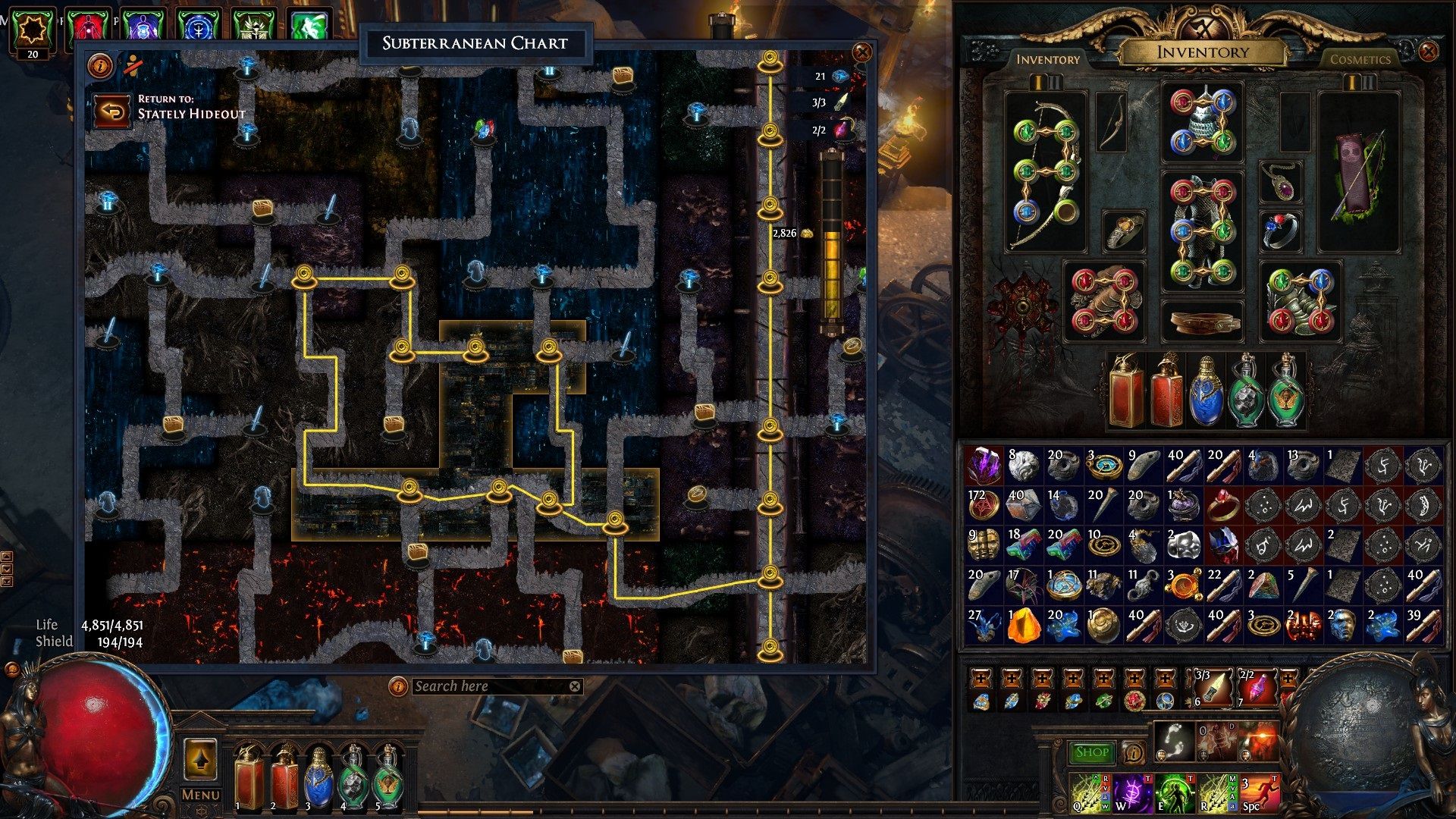 None of the item drops ended up being worth much of anything. The raw currency drops were the most valuable things I looted. After each ruined chamber I made sure to stash the non-stacking items. As you can see from my last run I filled my inventory. 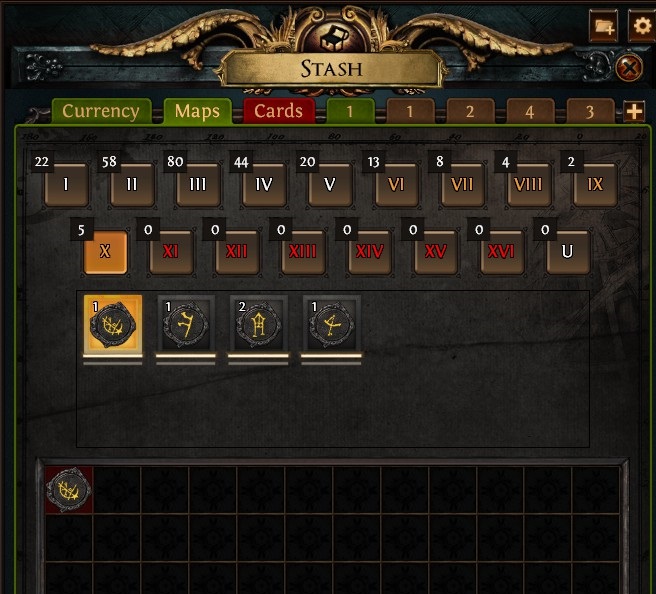 I ended up gaining half the Atlas bonus than I did the previous day. It’s becoming harder and harder to get enough maps to keep moving up. I was rather thrilled to be hitting red tier maps on the seventh day.

While I did get killed several times during the day it was not as bad as I was expecting. In the past when I’ve made it up to around tier 10 maps I suddenly would find myself needing to upgrade a lot of gear dye to getting wrecked entering into red maps. 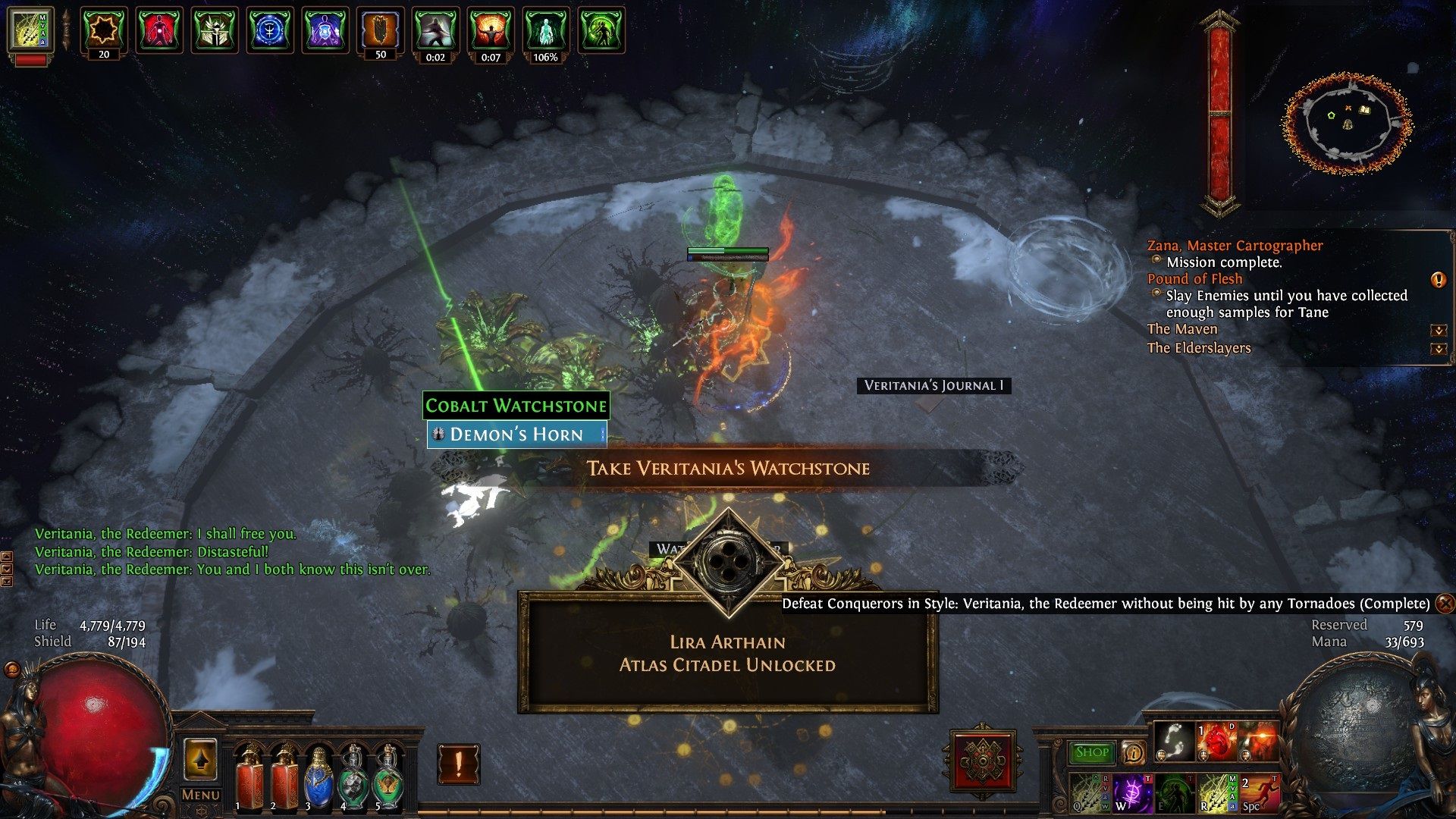 I also killed a couple more conquers so I could acquire their watchstones for increasing the region's map tiers. They ended up being quite easy fights at least for now. It can sometimes get annoying when the conqueror reappear. Perhaps I’ll luck out with some decent drops at some point. My highest ran map for the day ended up being a tier 11. With it being a red map to get the Atlas bonus I had to both rare and corrupt the map. This caused the most unfortunate situation of turning the map unidentified. Thankfully the build I’m playing is not that cornered about most things players would not be willing to risk entering an unknown map for. 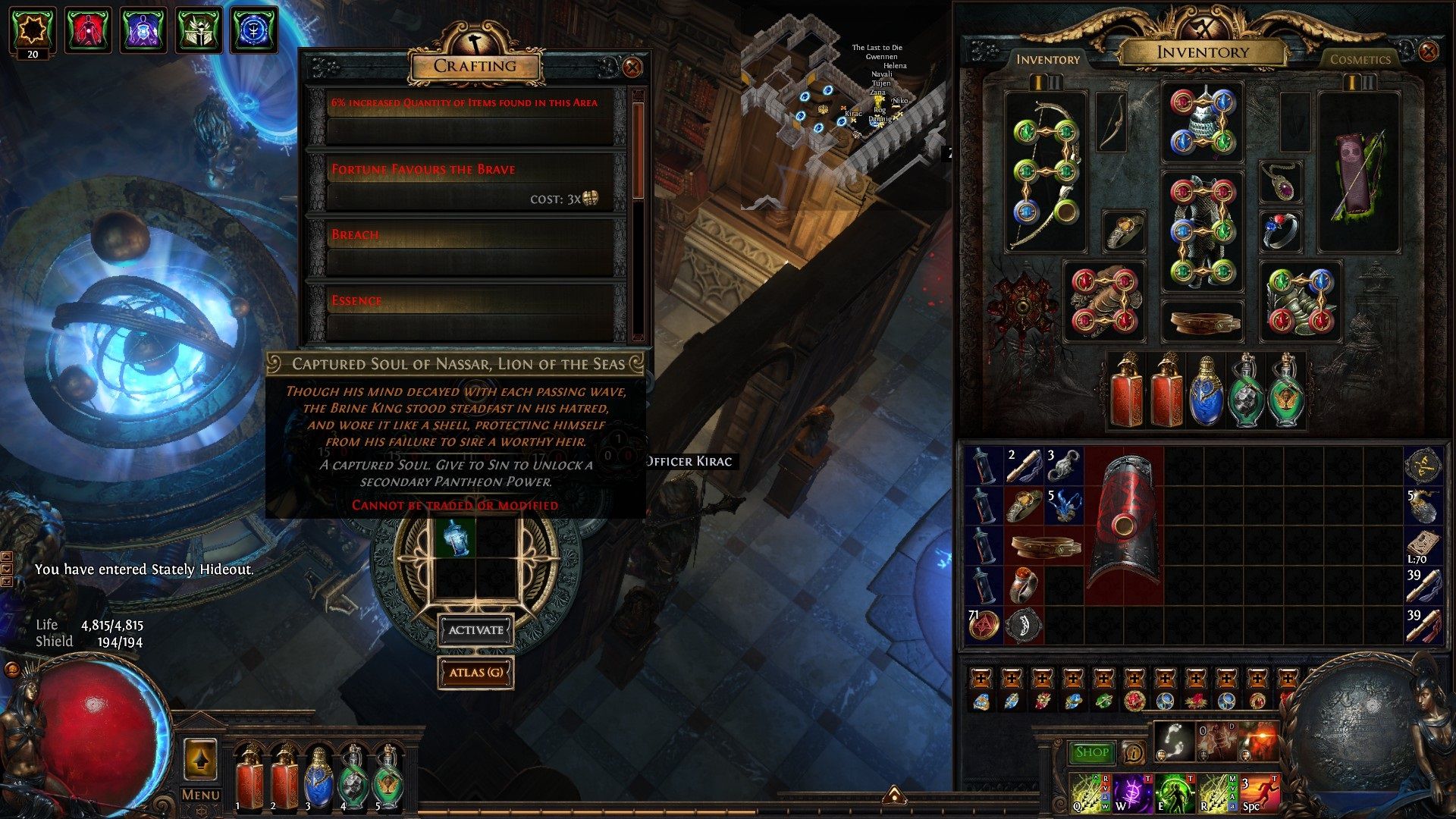 While I’m not getting wrecked just yet running maps with my current gear. I can slowly start to feel that day is coming and soon. As such I wanted to get some things I’ve been neglecting out of the way. Along with keeping an eye out for upgrades.

One thing I had yet to do was increase my pantheon bonuses. It involved crafting a vessel to store souls in and then opening a map with it in the map device. Once you defeat the boss in the correct map you head back out and collect the flask with a soul in it for the turn-in. I also improved my flasks slightly. While I was tempted to make some more “poor man’s Mageblood potions” (potions that auto-trigger on a full charge and gain charge on a hit by an enemy) as I like to be lazy and not spam my potion hotkeys. They are quite weaker than the standard once so I held off on doing so for now. I ended the day picking up a new ring with Despair on it. This should help out decently in the general clearing of maps as I’m running around and not normally spamming my Despair debuff on monsters. Since it will land with my main attack I’ve already noticed a clear speed difference. It will also be nice during some boss fights when mana is a struggle to not worry about it. 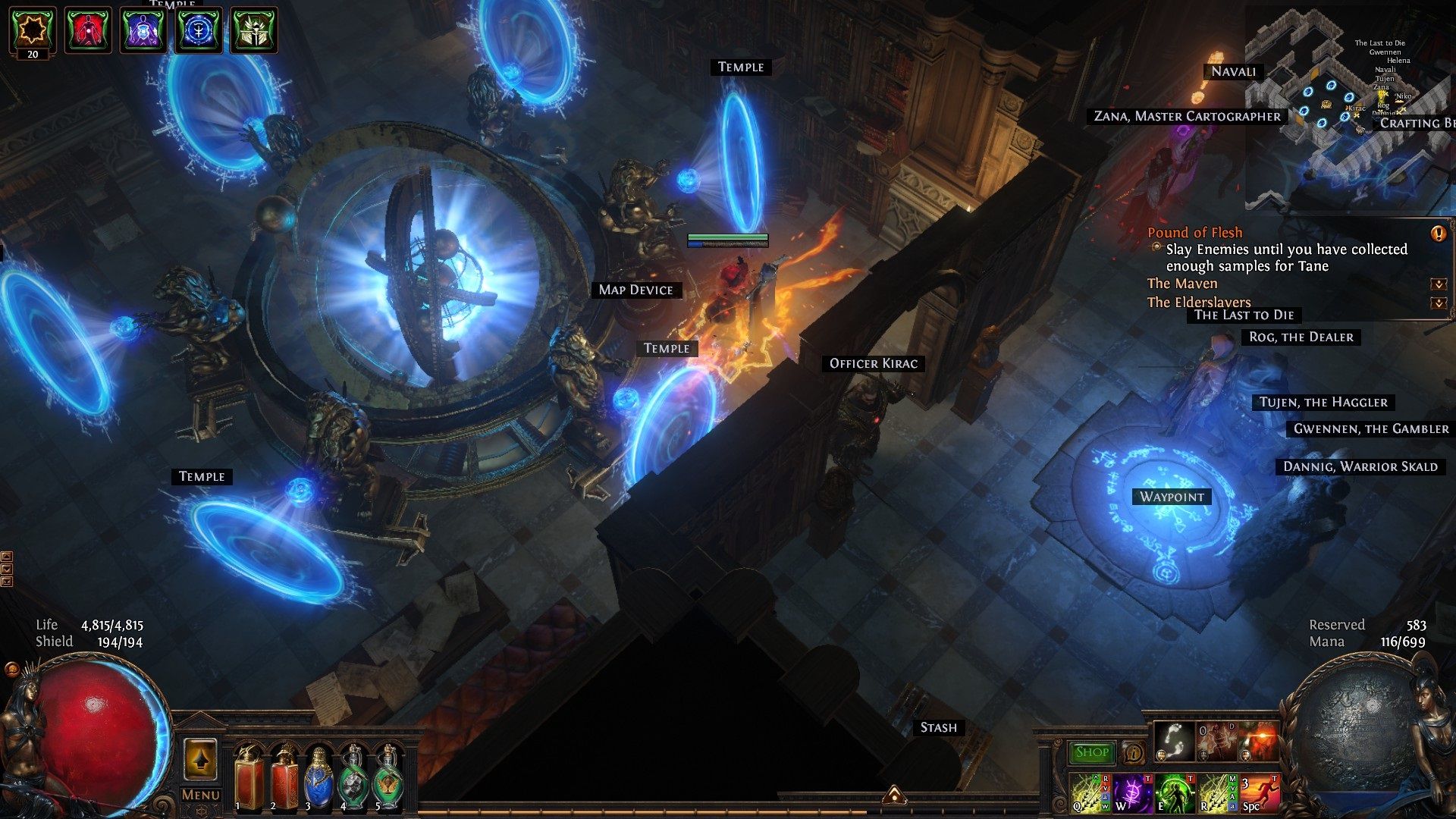 A week in and I’m still having a blast. I have not talked much about the league itself as I’ve been having too much fun on other things. I’m rather happy with being able to do red maps already I just need to get more now.

It sounds like the developers are looking to make some improvements for Scourge league itself. This is understandable as I’ve yet to put an item in the blood crucible that I ended up wearing long-term. It seems like I’m not alone in this trend. I have also not had a corrupted item drop with a scourge modifier worth selling or keeping.