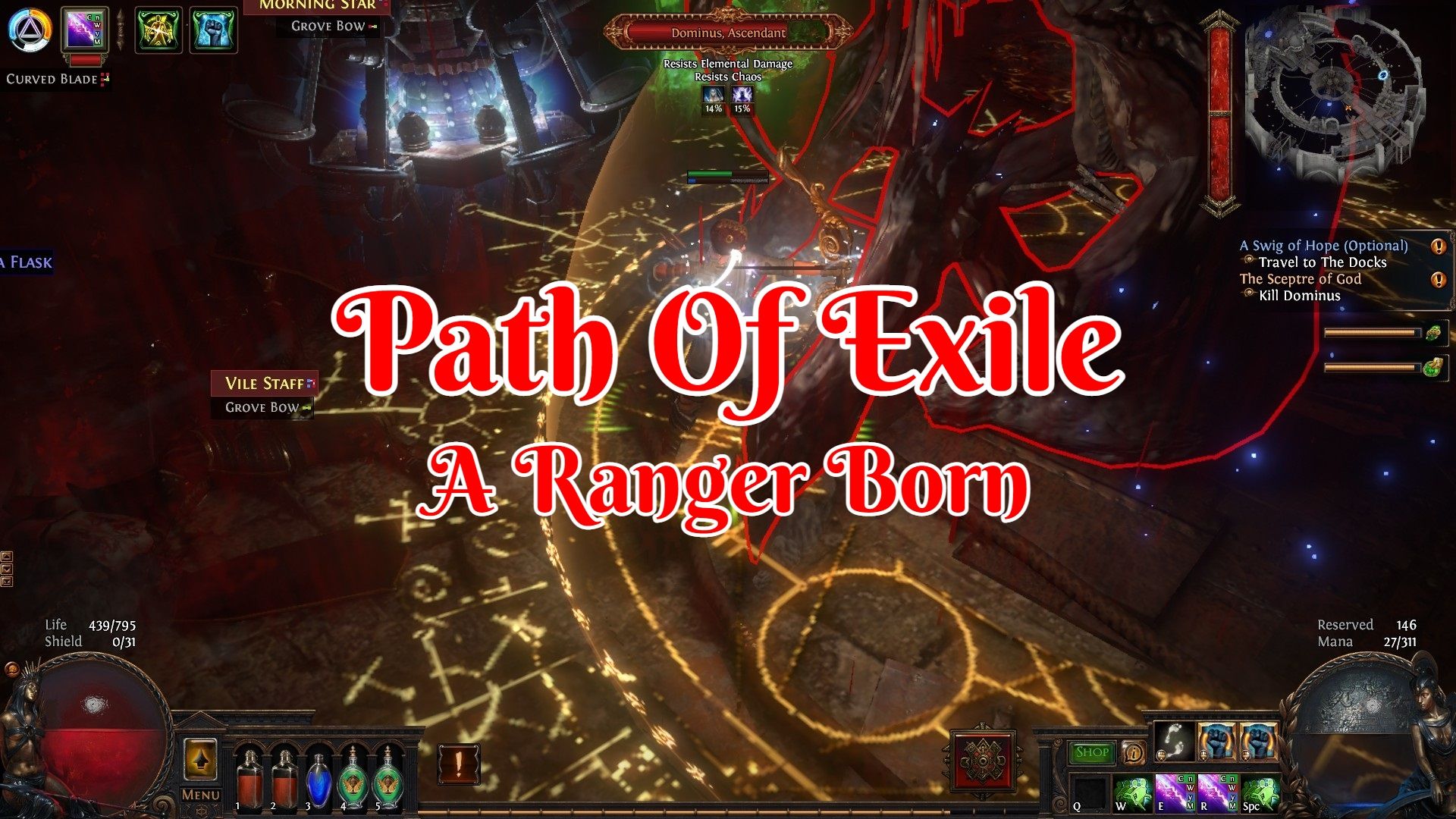 With the Endless Delve event coming up there were at least a couple of things I wanted to get started in Scourge before I switch over for a couple of days. This also means part of the day got cut rather short so I can take a bit of a break and work out a build to play for the event.

About a week ago I decided I wanted to start saving for a Headhunter. At the time they were 100 Exalts or more. In recent days the price has started to come down to mid to lower 80’s depending on the time of the day. While I could have pushed to raise enough funds to buy one now. I did not want to be sitting on such an item that I can’t use just yet.

I’m betting on the downward trend for Headhunter to continue and that will be the same price or even cheaper by the time I am done with the Endless Delve event. At least here is hoping that works out that way. I don’t know since the Delve event will be solo self-found if I’ll last a day or if I’ll end up playing for the full 10 days. While I am playing in the event I won’t be playing on Scourge. Still, I wanted to farm a few more items so when I started working on my new character in Scourge I have things I can always stop what I’m doing and sell to another player if I’m able. So I finished off the bulk of the Sulphite I had remaining. Along with running a few guardian maps I had sitting around for Maven runs.

In Delve I was chasing after some magma fissure regions hoping to find more Faceted fossils to add to the ones I’m selling in bulk at a premium price. While I only found one I uncovered another city and looted a few maps out of it.

There were a couple of other areas of my Delve map I ended up exploring. While I did find a few other kinds of fossil types none were what I was looking for. At least the darkness in those areas provided something.

I finally cleared enough space in my sales stash to start selling off the bulk of fossils I’ve been farming over the past several days. I ended up trashing a lot of lower-valued items. Those items have been sitting around way too long and it’s clear no one is interested in them.

Naturally, as some of the Delve fossils and resonators started to hit the sales tab I got an influx of people looking to buy. Some stuff even listed over the current market prices sold. I’ve learned some of the fossils instead of selling for 1 or 2 Chaos will sell in bulk for 6 each if I have enough. While others will sit around for days not moving at all for next to nothing. A nice little profit was made that is for sure. I ended up running enough guardians maps to have another three Maven runs. Outside of the fragment drops and Orbs of Unmaking nothing else was worth much. Some of the Watchstones I got to have yet to sell even for 10 Chaos. I at least got another Maven Writ out of it with some spare splinters towards the next one. I also had some Scourge maps laying around that I needed to run. One of them dropped a fair amount of Simulacrum Splinters. That with the small amount I already had I sold for 1 Exalt. The other maps I had were not as rewarding. My current main build in Scourge is a toxic rain character. He is wearing a belt if removed puts him under the required strength and intelligence to run his current setup. This means I can’t just for fun slap a Headhunter on him and clear some maps. That character is also just not going to be anything I’d want to reroll his tree for. Instead, I’ll be making dedicated magic find a character.

It was time to start a new character this time a Ranger Deadeye. While I’ve played a ranger a couple of times I always find them rather squishy and not much to my liking. While I have in the past played a Windripper bow build. This magic finds character I’m looking to make is going to put that one to shame.

So far I’m not sure what to think of lighting arrow ranger. It’s been an interesting struggle damage-wise trying to level it up. While I attempted to use some other skills at the start. It was not long before I realized I could already use most of the skills that I would end later on. I had a bunch of leveling unique put off to the side on an alt character I had made just for the occasion of making a new character to play. I dumped them all out of that character's inventory and into a separate stash tab I would be using during the leveling process. Some of it was great other stuff I swapped out for something more useful for a ranger as I leveled up.

It included among other things a Tabula Rasa robe I put to use quite quickly with almost using all six sockets by act 2. It was nice to have maxed out resistance early on. Other than replacing the wand for bow and quiver for more damage and upgrading them every so often. I mostly kept everything else.

So far killing bosses or anything with a decent chunk of health has been challenging. There have been moments where I was not certain I was even going to be able to kill a boss without grinding out some levels. In the end, I’d get the kill but not without a fair amount of deaths and struggles along the way.

I can already start to see even without the proper gear that normal monsters are not that much of a deal. Up until act six of the game, I was running three or four levels below each zone I was entering. I would just drop a lighting arrow and packs of monsters would just pop as I ran around.

This thing is going to be a glass cannon with a lot of magic find gear aka item quantity and quality. I have yet to buy any of the pieces yet as I don’t want to be holding onto anything for an unknown amount of time before I return to Scourge once I’m done with the Endless Delve event. I managed to get the ranger up to level 50 and into act 7. I still have a decent way to go to maps. At least a decent amount of running through the normal game has now been done. I just hope all the bosses I have yet to kill don’t be too much of trouble that I need to stop and grind up a bunch of levels somewhere for a few hours. 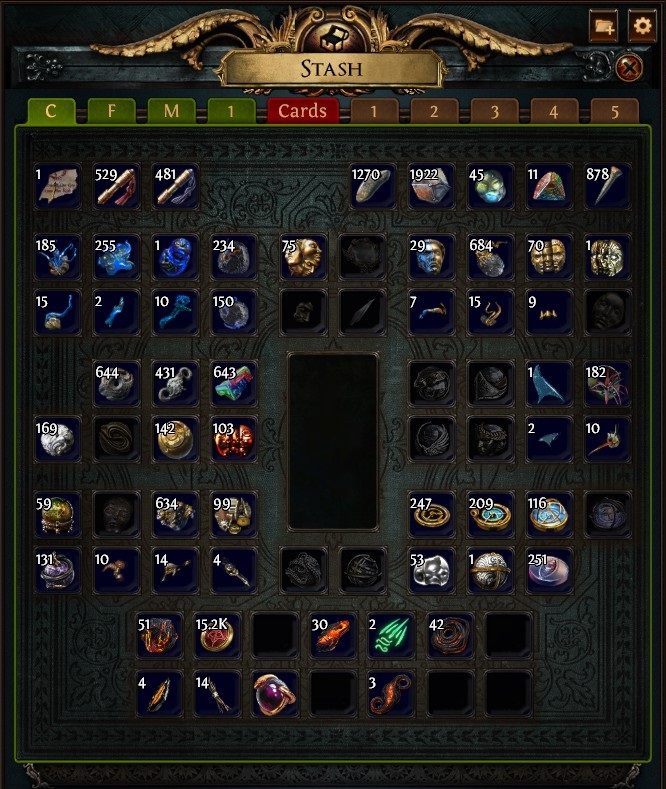 While 75 Exalts is not exactly the amount I wanted. I have quite a lot of stuff to sell that I’ll try and work on before the Delve event start. Once I do buy the Headhunter there will still be a few pricy items I’ll need to acquire. I might end up needing to do several more days of grinding to get the rest I need to at least start. Once I have a decent base for the ranger to start farming maps I’ll work on upgrading and spending lots on fancy things I’m sure.