I have managed to check one of my goals off my bucket list for this league. I have also been working on increasing my exalt stack to make a big purchase and many other things. The first day was rather busy focusing on Delve. While the second day was a bit more relaxing focusing on selling items in my spare time. While my journey in Delve left off at around 438. I had yet to farm the darkness in those areas and clear out any nodes of interest I might have missed. So I went back up to depth 419.

While farming the darkness is not always the best loot. Since I’ve already paid the Sulphite costs and done the hard work of clearing out the nodes. The fun and easy parts are just running around looking for chests to loot and blowing down walls. After a little while in I happened to have found one of two Prime Chaotic Resonators for this trip. They are the most expensive and sought-after resonators. They sold quite quickly and if I had more I could have sold them for even more. However, you never know when the markets will change and I’d rather not sit on a higher-end item like this for half a week. In the mid 440’s I ended up finding a city cluster. While not as impressive as what I found on day 27 I’m always happy to find them. The loot this time was not that great. I was hoping at this kind of depth I’d just be pulling out an inventory full of red maps since they tend to be where the money is at. No such luck.

There were however several nodes away from the city two areas that dropped a Faceted fossil each. Some other fossils have jumped in prices as and I’m keeping an eye out for them as well. In the past, I did not always go for things like Glyphic fossils but they are now going for well over 24 I think I ended up selling a pair of them for 64 chaos.

Around the 450s things started to get a lot harder. I was already struggling with not being able to kill every single node depending on what it was. I was slowly accumulating a list of nodes depending on the modifiers on them that I would have to take an alternative path just to skip around. At depth 470 I thought I was now done. The node happened to be a tier-three Azurite Fissure. That meant I had to fight a boss to clear the node that would fly on occasion. It was in a really bad spot as well where having to go around it would take me quite a lot of Sulphite. I ended up getting killed three times in a row before making one final attempt. I decided to focus on killing all the adds first and just ignoring the boss the best I could while moving out of his way every time he came to attack me. Till the only the two of us remaining. Then I went in for the kill.

After that rather intense fight, I thought the rest of the way down was going to be a massive challenge. That ended up not being the case. The area I was traveling through just happened to be extra hard. Once I got beyond that point I could tell trying to go around it would have caught me in a few long-dead ends and cost a lot to find another way down. 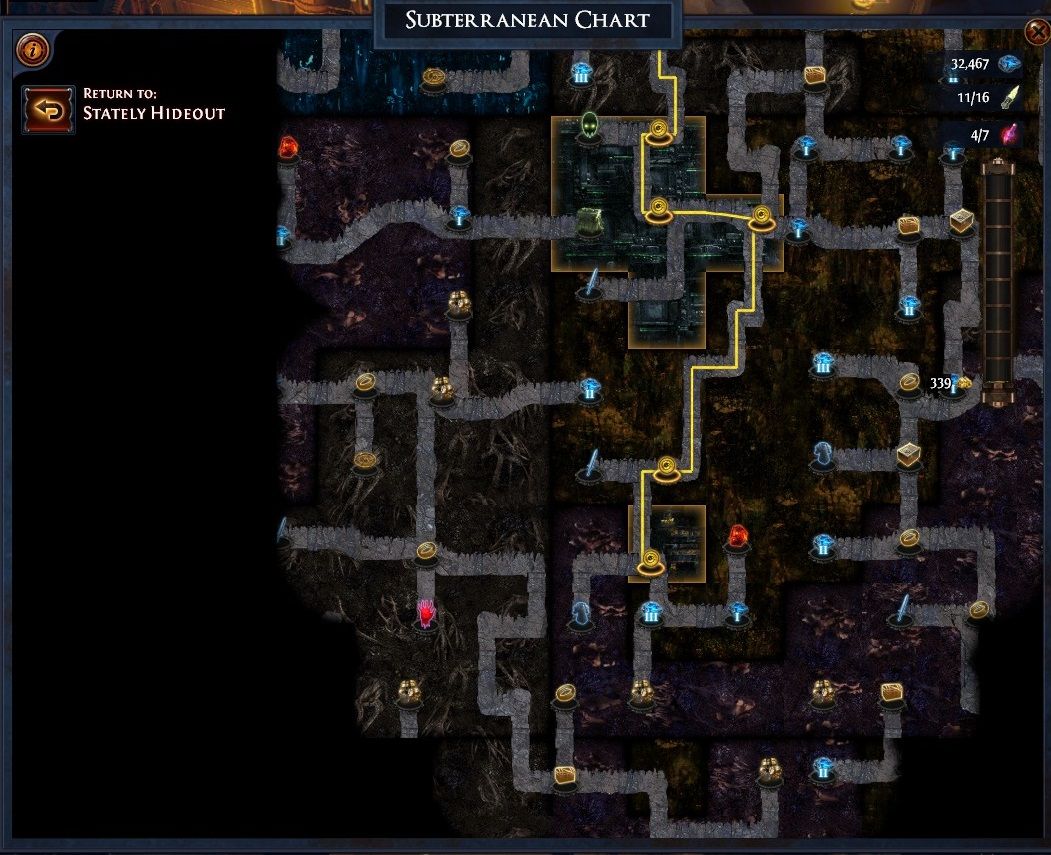 Right before the 500’s, I ended up finding a city. Clearing out a city node or failing and dying will check it off and allow you to travel through that area. So even if I died I would almost be there repeating the process through 4 chambers in the city. Thankfully I cleared them all without getting killed.

Then it was down to the last node I needed to finish to reach my goal of 500. Tchecnlculy because of the limited path I could take I was going from 499 to 501. Somewhere along my journey, I would be hitting 500.

What I thought would be my last node contained jewelry and it was quite an easy clear. I’ve never reached a depth like this before in Delve. Even more impressive is the new 500 Depth is like the old 1k depth. Making this quite an accomplishment in my overall Path of Exile journey.

I of course could not help myself. There was a single-city burial chamber below that point that I just had to clear. The loot was nothing special. I don’t quite recall what I ever got out of it. I was just happy to have made it that far down.

I’m not sure how much further I’ll keep going. I expect soon enough to hit a point where I just can’t clear anything. After that, I might go up to the 400’s or a bit lower and clear sideways from there if I get enough decent nodes appearing from time to time. This was the bulk of the Delve loot I got during my recent journey. There were a couple of higher-end fossils such as Faceted that I ended up selling before I took the screenshot. No point in sitting on stuff I know I can sell when I have enough of them to list at a bulk premium price. There was also a giant haul of currency and a few other random items I tossed into another stash tab. Among the other things were 72 red maps of which 5 or so were corrupted as normal or magic that I consider not to be something I want to sell in bulk. Finally, a few random items I found included a six-link bow that I sold for 50 Chaos.

In total there were around 10 Exalt worth of loot. Nothing that crazy. I was hoping at this depth things would start to get a bit mind-blowing. I found the overall loot to be rather average. There was at least an increase in finding Faceted fossils and that helped out a lot. This day was mostly spent focusing on clearing up my inventory and getting a lot of sales on items. I’ve refined my process even further so in the future I’ll be getting more items up quicker on the market. It takes a little time to get back into the swing of things for a game like Path of Exile and the markets are one of them

For quite a few of the lower tier maps I can just set the entire tier as a single price and move on. Sadly after some testing, I’ve noticed even if I say list things for bulk buys only they do not auto-setup everything that way if I do it from the tab.

If I want to set things so they are 20 chaos for 5 maps for instance I have to go in and set a singular map in the map tab as such. Otherwise, 20 for 5 will just show up as 4 chaos each. While a bit annoying once people see the message that it was set up for 20 for 5 many replies back saying they will buy 5 instead of just one. While others just want a single map and move on.

I also don’t have five of every map. Some maps like islands and towers also sell for a heck a lot more. While It was tempting to hold onto certain maps increase I end up farming those areas when I make the switch over to a different character. I’d rather have the currency now and rebuy the maps later on. I’m now 38 Exalts towards my total of needing around 100 for the Headhunter. It’s kind of insane to think I have that many let alone in a single league. This is more Exalts than I have total on standard.

Path of Exile has announced the exact date, time, and event details for a bunch of events in December. I will more than likely be taking a short break from this series and doing a couple of days in a few different events. Most notably I’ll be partaking in Delve, and maybe Gauntlet or Delirium.