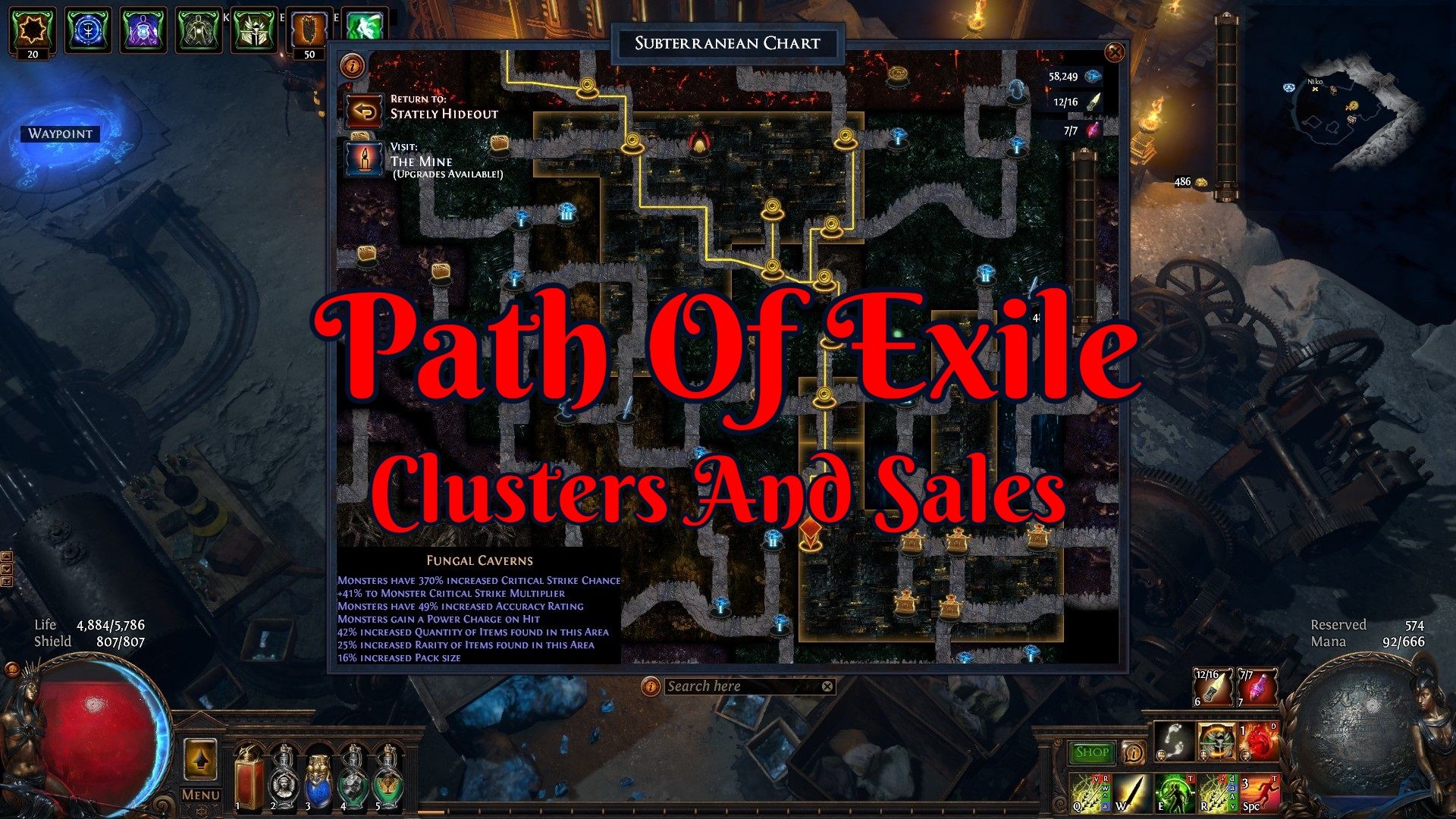 I have been quite busy these past two days farming up mad amounts of loot and selling a lot of items. I have created a fun farming rotation that gives me exposure to a few different markets. As a result, I end up having many different kinds of items to sell. I’ve also had some interesting luck. I’ve further upped my profitability somewhat when it comes to running maps. While the end goal is still to get Sulphite for delving. I am now making sure to always be running a new map for Maven farming as well. This could include going after the guardians once I have their maps or just a region's Maven. Either way, they're a bit of profit to be made.

Before I was holding onto my maven loot and any fragments I would get from killing guardians. I decided I was not going to try and farm those higher fights since I’m not quite sure my build could be handed them. I’d rather not be stuck with high-end items that take forever to move either. I can just sell the fragments to those who can farm and want to deal with it. Making for some quick sales.

I ended up selling the two Maven’s Writs I have for 120 Chaos each. Along with over 20 different fragments in different ranges of prices. I can see why many just farm the guardians to raise funds. In addition, I’ve had some recent good luck on landing decent modifiers on scourge maps I’ve been leveling up. I had one, in particular, that had a high amount of tainted currency drops. I ended up getting 2 Exalts worth of currency that I’ve sold from the Tainted Divine Teardrop, Mythic Orb drops, and some other tainted currencies that dropped from running it.

That was not my only good luck running during running maps. I also had a random Delirium encounter that dropped the most I have ever gotten from them before. While I did not play in that league I can see how crazy these could get with the right build and other factors if you were farming for them.

It was quite a wild ride. While I was running through the zone trying to clear as fast as I could without falling behind and having it end. I ended up coming across a boss that dropped a small cluster Jewel The Interrogation that I sold for 30 chaos. Then came a point where I ran out of monsters I could kill while still staying inside the cloudy area. I was not expecting much more to drop with the small cluster unique I got. Once the timer hit zero this spilled out onto the floor. I ended up netting over 90 Chaos in sales from this encounter.

Outside of all the bosses and other things I was slaying during running maps. They were the times I was hoping if someone wanted to buy something they content me during them. As it was a quick portal to my hideout, trade, and jump back into the map. 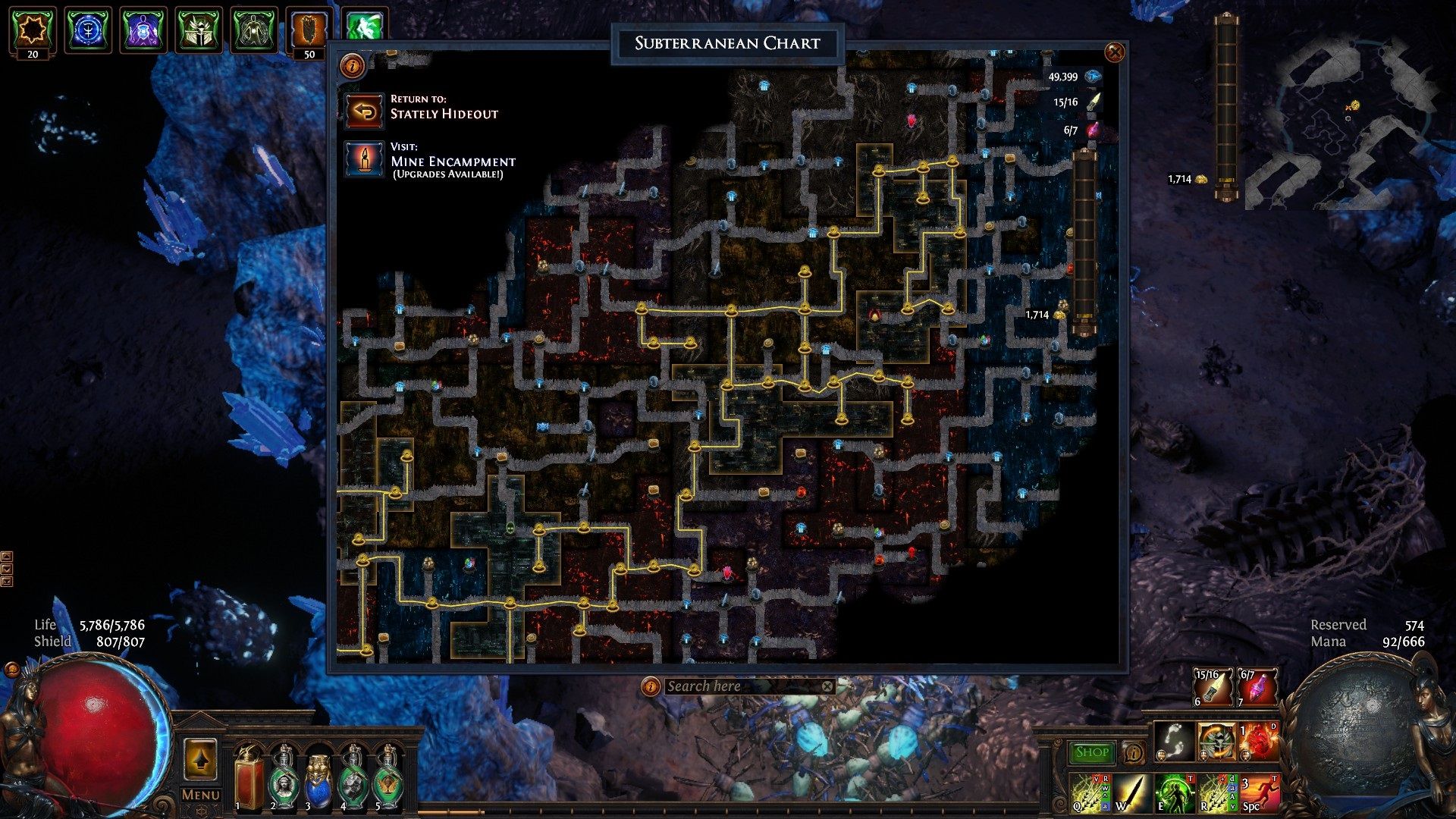 While I have not gone much deeper as it seems I’m at the point now there is more risk involved than reward I’m getting out of it. I decided to check out some interesting things on the map between 350 and 500 depth in Delve that I already had somewhat uncovered. They lead to some interesting times.

I ended up hitting a bunch of what I’m going to consider to be clusters of cities. If nothing else they were many cities all rather close to each other in a few different parts of my Delve map. They were a great source for bringing in lots of maps for me to sell.

I also went back and murdered an encounter I was stuck on a few days back. Behind it trapped were another two encounters that I quickly got 70 Chaos worth of loot out of. The fight was so intense I did not get a screenshot.

The fight itself involved fighting a harbinger which I hate those things. They take forever to take down and this one was in a nasty area that had extra totems as a modifier. I ended up hiding on the side of a boulder that was just in the range of a light source.

I would then kill off whatever wave of enemies the harbinger would send at me. Afterward, I’d dive into all the totems it had spawned around itself and kill them before running back to my hiding area. On several occasions, the harbinger would follow me back and I’d have to drag it back to a better spot where I was not getting the full spawn on me all at once.

While I did not find as many higher-end Fossils as I was hoping. The bulk of my time down in Delve was spent clearing towards a city or clearing out their chambers. It was crazy how many of them I’ve managed to find now. I’ve burned many 55k stacks of Sulphite and I still need more. Stacking the chaos as high as the ceiling was the name of the game. There were quite a few points where I’d have 1k Chaos in my currency tab and I’d have to go out and trade for more exalts. It’s a shame most of my items sell for less than an exalt. There were at least a few moments where I got an exalt from trading items.

Map sales have been going great. Every season I always avoid selling them since I never have a lot anyway. They can be a bit annoying when people don’t want to buy in bulk so they try and just buy one. 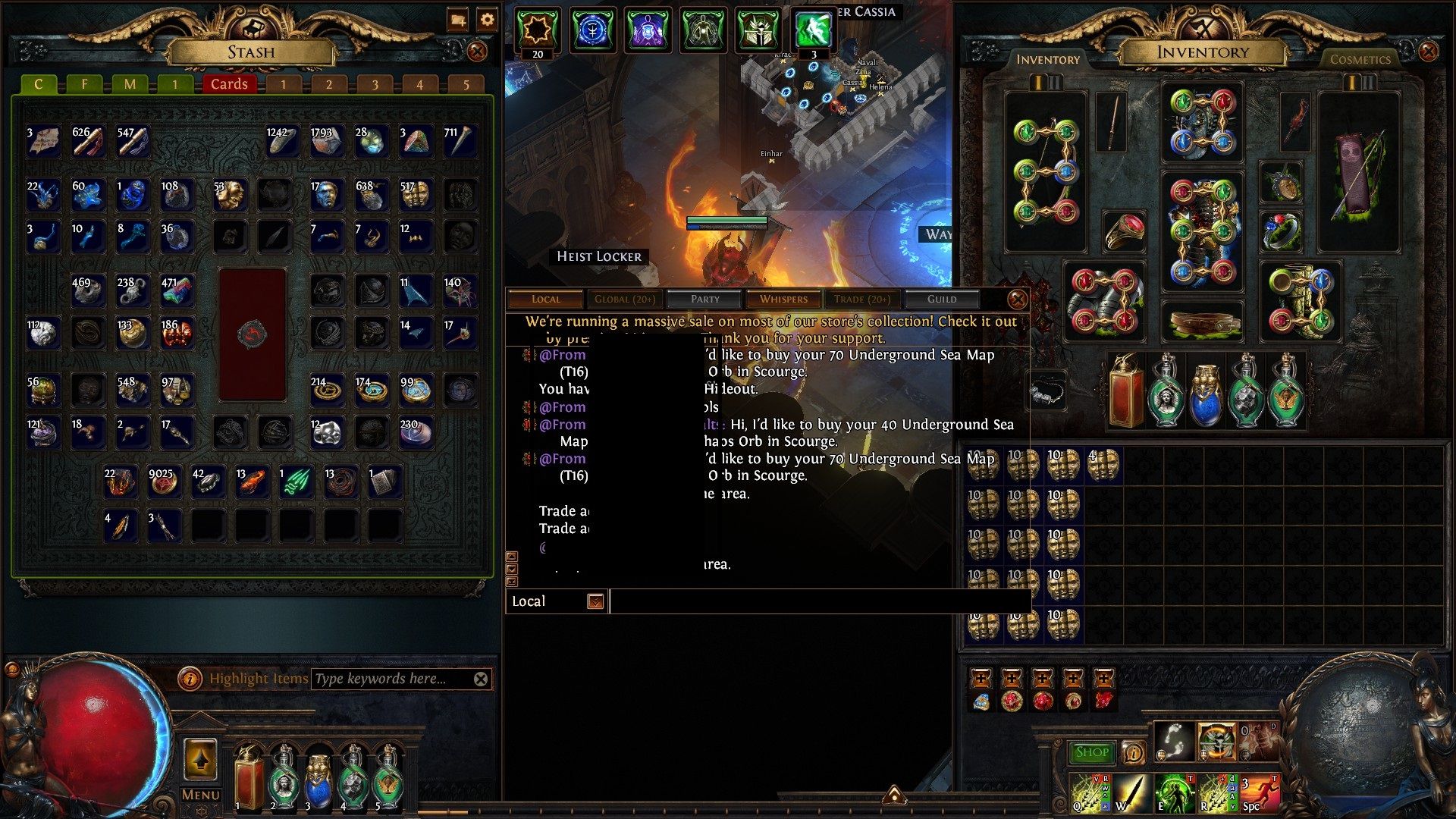 Then I would have moments where I’d get contacted by someone who is looking to buy out every single map I have of something. I had one trade exceed the max amount of items you can hold in your inventory. The guy ended up paying me in full with the first trade and I gave him the rest in the second trade.

Always a little funny when you can tell the lower-priced items have been bought out. I would get a wave of buyers all grouped trying to buy the same item. Sometimes I’d sell to someone looking for say 20 maps and not even 10 secs later I’d get someone wanting to buy all I had. Then you would have hours of no one buying any.

There have been a few moments of disappointment. I had some items I was hoping would be selling for 1 to 3 Exalts. After those items have been sitting for days I’d start to price them down. In the end, I’d get a sale at 80 Chaos in some instance. While other times those items are still sitting.

It is tempting to buy more premium stash tabs just for selling items. I have quite a few items that are just sitting around in my other stash tabs waiting to be listed. Over time once an item fails to sell for at least 4 Chaos I’ll chuck it and replace it with a much higher item. Other than how annoying selling maps can get. Trying to find people to exchange for Exalts is always a struggle. I’ve gotten to a point where I’ll only trade Chaos for exalts for 4 Exalts at a time. Just buying one exalt at a time with how much inventory I’ve been moving would take forever. Even more so since I still have a ways to go to my goal of over 100 Exalts. According to Exilence Next which I’ve been giving a try for a week now. I have around 14,626 Chaos worth of loot in all my stash tabs including my maps tab. That equals 100.8 Exalts worth of stuff. While that is around what I need there is still a lot more before I have 100 exalts.

At least I’m closing in on the number. Hopefully, I can do it in the next couple of days before I jump into a December event for a short while. I’m at least happy to be at 62 Exalts now. Getting to 100 or more is seeming less and less like an unreachable goal the closer I get.