This was an event I was quite hyped for. I really love Delve in general and only being able to play in that part of the game without having to spend Sulphite is quite interesting. Path of Exile is just one of those games where there are lots of little and big things that make it amazing. Isolating just one thing on its own is never enough.

In the Endless Delve event, you do not have access to a crafting bench among many other things. You however are not entirely out of crafting options. Beyond the normal stuff like rolling sockets and whatnot. Delve does have resonators that you can craft with and essence do drop. I rarely do any crafting with resonators or essence so being forced to use them sounded interesting.

It has been quite a while since I’ve played a shadow saboteur let alone use skills like traps. I knew they might not be the best fit for something like Delve since the crawler you follow is costly moving till you reach a maximum distance from it or land on the node you were heading towards.

I logged in maybe 30 minutes before the event started. Since this is more of a limited-time event league and not the start of a longer league the servers were not down. While some regions ended up having long queues to get in if the player crashed I had no issues.

I made my character ahead of time. This meant instead of messing around with picking my class and creating a name I was ready to go. Once you are in you are frozen. You however can access and use your inventory. Along with getting things like filters all set up. The timer counted down and off I went on a new journey. At least that was what I was hoping. I quickly stopped at the gem skill vendor they had moved into Delve so we at least had access to that. After that, it was down into the Delve mine for me.

I made it a few steps in and splat. It’s been quite a long time since I’ve used something that this kind of setup. For the setup itself, you use mines skills that you have to detonate yourself. This is a bit of an issue with a moving crawler. It’s not till quite a few levels later do you switch over to using traps. I dusted myself off and enter the mine again. This time around I made it to the node and ran out of flask charges for mana. With no mana, I could do little to no damage trying to fend off massive waves of monsters breaking my neck another death on the scoreboard.

I enter again this time paying more attention to what is around me. I’m looking for any normal item or better that I can loot. I can’t with my current setup clear the first node without finding any gear. I think I found a pair of gloves. That however was not enough and splat again.

I enter again. So far not even cleared the first node of this event. This time I spot a chest along the path to the node I’m traveling towards and get some items out of it. I make I alive to the node and this time I clear it for some Azurite.

At this point, I’m hoping I’ve built up some momentum that I can now move forward. If I could get all my deaths out right away when they did not matter that would be great. For the next two nodes, I clear no issues whatsoever.

I’m now on my fourth node ever for this event. It might have been level four monsters if that. I open an r chest and loot a Prime Chaotic Resonator. I’m thinking to myself wow what insane luck. During Scourge league, I think I’ve found less than a dozen of them. 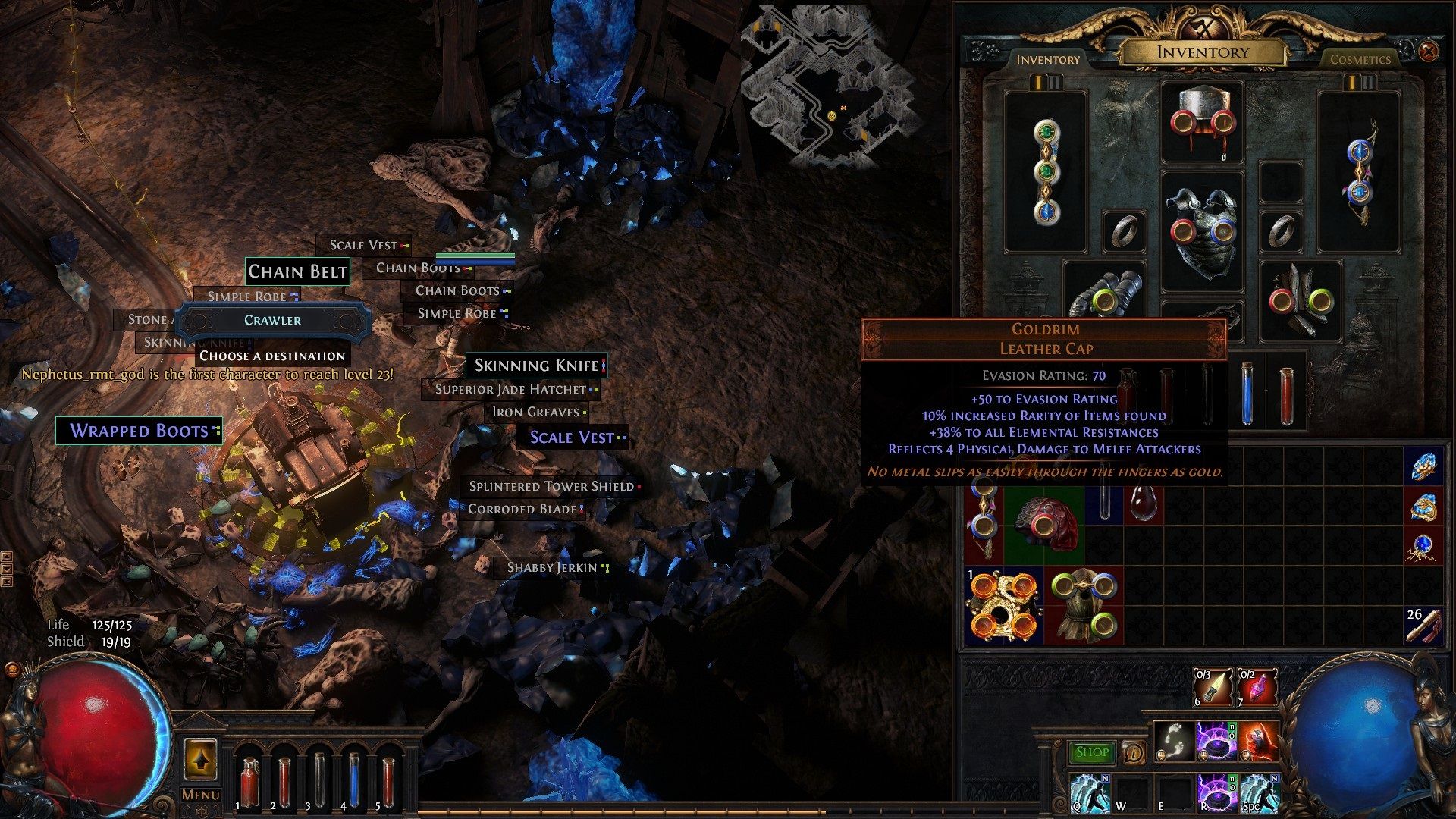 The next node I clear and wow another Prime Chaotic Resonator. At least I also got a Goldrim leather cap. This was going to be a huge help for my resistances since I can’t just bench craft some onto my items.

I clear to another node and guess what? You know what dropped. At this point not even an hour into the event I’m a little annoyed. I can understand that they made this event void so that anything you loot or characters you make will not transfer to standard. This however was just way too much.

A few nodes and paths cleared later and I’m not just thrilled about having to denote the mines for my current setup. On top of that, the damage is just not great. I’m not having fun. There are now a few things that are bugging me about this event.

I decided I’m going to take a break from the event. I have a lot of things I’m super excited to see the outcome for in Scourge league. They however require a lot more effort on my part to achieve.

The next day rolls around and I jump back into the Endless Delve event. With the bad start I had, I thought maybe I was just having an off day. Sometimes it’s just nice to take a short break and try again later.

There are a lot of things I love about Delve. The further along you travel the more options and choices you get to make. Do you head towards a jewelry node? Maybe go for some amour instead? Whatever it is you see if it’s unrevealed on the map and try to go for it. 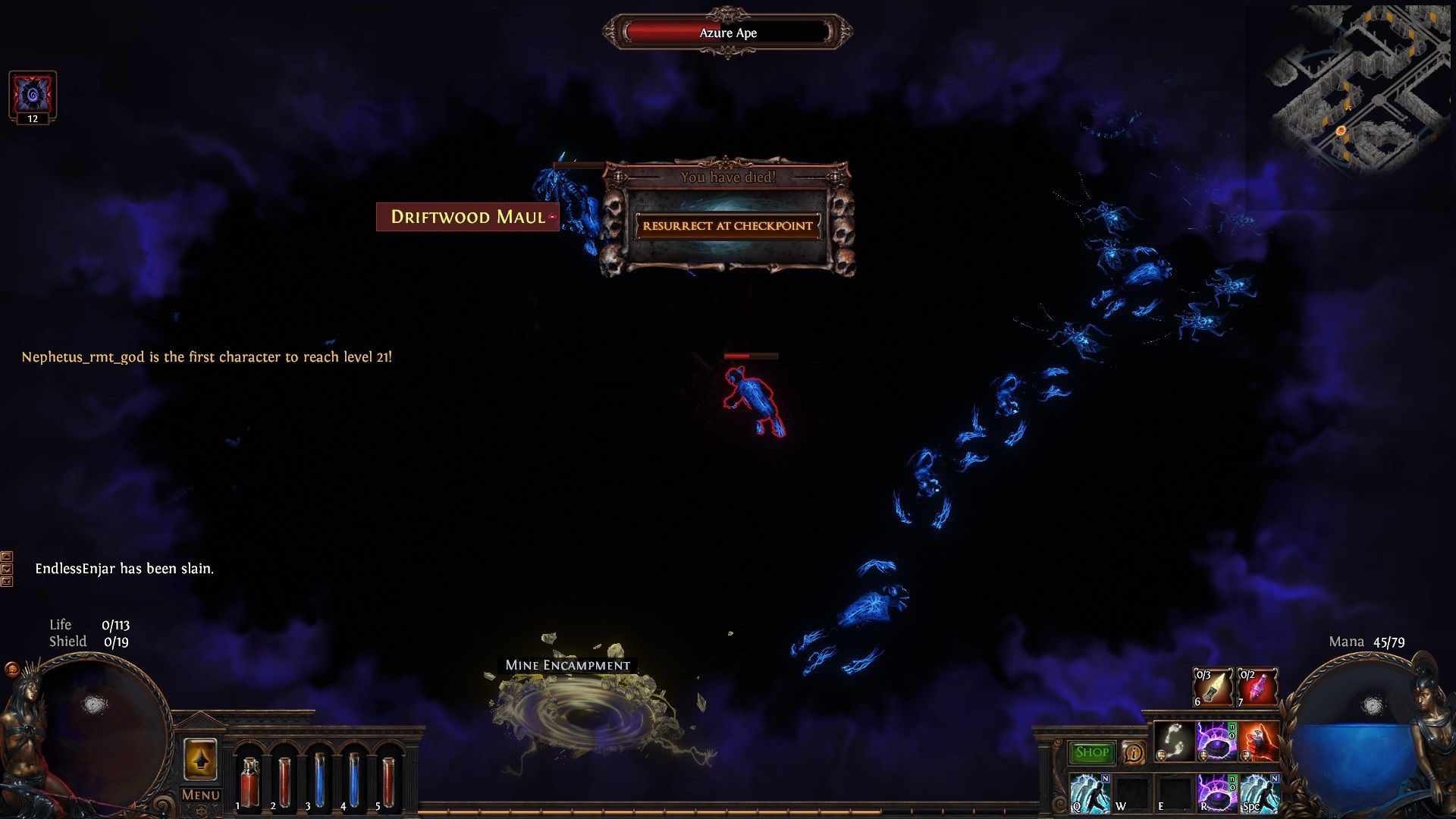 One thing I was struggling to find was Azurite. I had yet to unlock the first level of increasing the light radius and reducing the damage you take from the darkness. My crawler light was small and it took almost no time in the darkness to kill me. So I decided to call it. I wanted to level up my ranger a lot more and get her into maps than I wanted to spend any more time on my shadow working on his levels in the event. Since this event lasts for 10 days perhaps towards the end I’ll give it another try.

I’m far too thrilled about what I’m already working on in Scourge. I just can’t enjoy doing anything else at the moment in the game. The screenshot above is also a hint at what I’ve been up to. If you follow me on Twitter you already know the good news. My normal updates from Scourge will start again shortly.