It was time to unlock more Uncharted Realm passive points. Along with killing some guardians that I have yet to defeat. First though to warm up for the day I would finish off what I needed for the Twisted Invitation and run it again. Unlike the first time when I ran the Twisted invitation where I had some Watchstones removed and I rerolled the invention to be something easy. I ran this one as rare with Awakening level 8.

While I do have some decent damage it takes a moment to ramp it up. It’s also damage over time (dot). Since there was too much damage to sit there and tank it from all the bosses in the arena. It meant a lot of the fight I was dropping damage and not doing a lot as I was kiting them around.

Toxic Rain does not have that great of an area of coverage for the dot either. So I had to place my damage the best I could without taking on too much damage. This was easier to say than do.

Like all the inventions I ended up running for the day I mostly kited around the area all the bosses that spawned in. If I thought I could get down some heavy damage if one of them became separated for a moment and I had a full healing flask I went for it.

I’ve yet to do this without at least some deaths. I did get a little greedy in trying to deal damage. If I had dragged this fight out even longer than it was I suspect I could do it without getting killed.

Thankfully in these Maven fights once you get some kills you can spend more time landing and building up damage where a boss is sitting or about to walk over. It still does not feel ideal. In many cases, I felt like I was single targeting a boss every lap I made while avoiding as much damage as I could.

Once the first boss was killed the rest would get easier to deal with. Then I could target whoever was being the most annoying and get them off the field as well. The first one however would be whatever one spawned in first that I got as much damage on as possible before I needed to start kiting around.

At least in the end I was able to get the kill. I would hate to fail one of these as they do bet a pit pricy to run once you factor in all the costs. I ended up having a few other guardian maps to run for the day including getting some new skills.

Guardians Of the Void 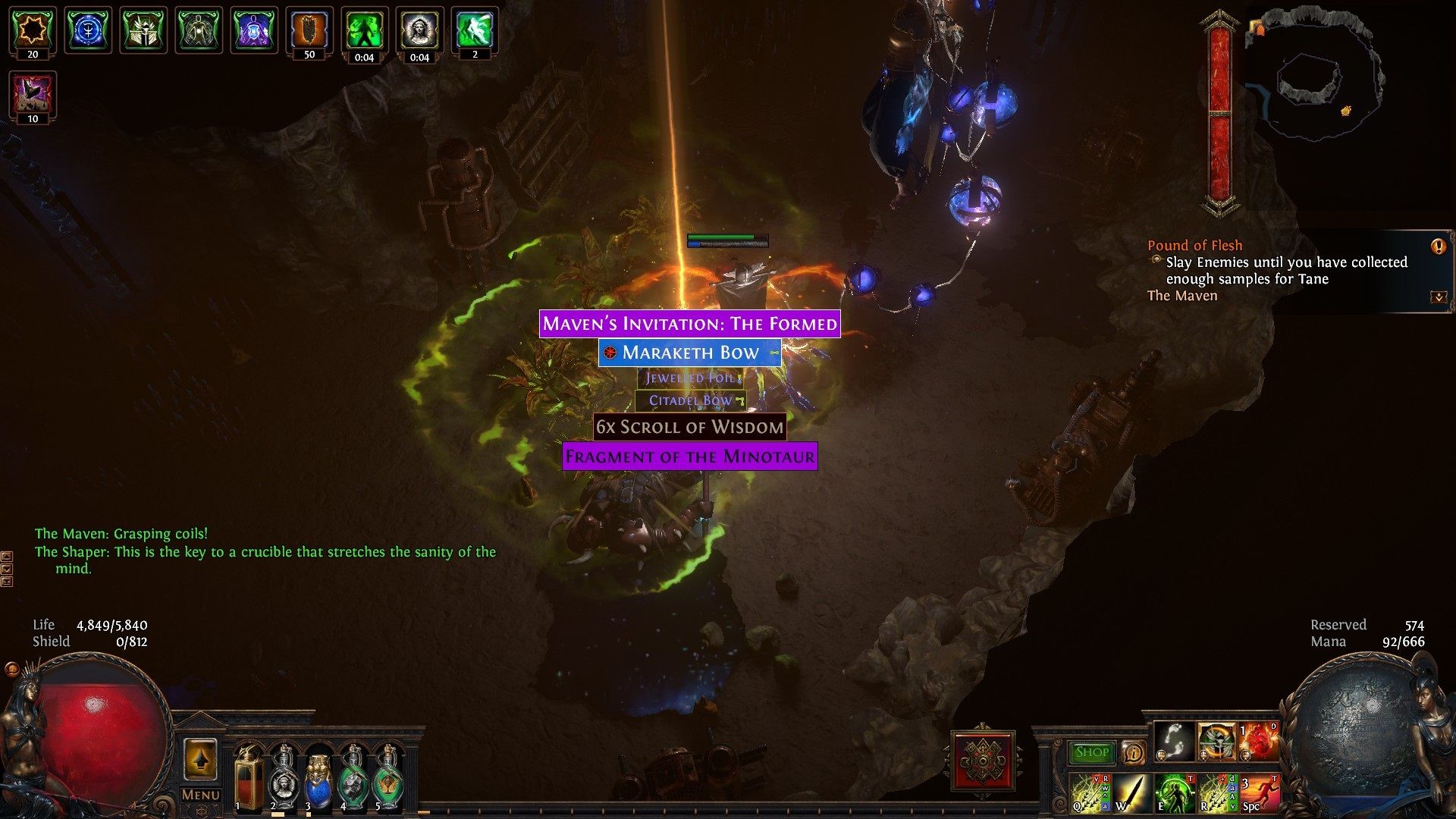 I had been saving all the map drops this league I’ve been getting of Phoenix, Chimera, Hydra, and Minotaur. Since the build I’m playing has done an ok job with everything else I’ve tossed at it I thought it was time to give these a try.

I ended up having at least two sets' worth of maps. For whatever reason, I seem to have acquired by chance seven Pit of the Chimera maps. While everything else I’ve gotten about even drops of. I’m not sure yet after all of this if I want to go out and buy what I’m missing or just sell off what I have.

The first time around everything for all the guardian fights I ran for the day was quite easy. I had two unspent points in Uncharged realms for the Atlas passive skill tree. I do wish I had spent them sooner. It is what it is. At least I got to experience things before they got much harder. After that, I ran the Maven invention for them and unlocked another two passives. It was quite the challenge like the other invitation I had run for the day. I decided to spend my passive skill points on Remnants of the Past and Guardian’s Aid. Since I believe I’ll have many more guardians to run on this build over the next week or two. I wanted to see how hard that made things. While it has not felt like 50% of the time I have now gotten two fragment drops from a single map. With the guardian healing to full and spawning in another one. That has increased the difficulty quite a bit.

I went from mostly being able to face tank to needing to be a lot more careful. I do wish the arenas these guardians are were a bit bigger. With all the effects in the room going on, area damage, and anything else, it can be a struggle to doge damage.

I am now out of Guardian maps that I have farmed myself. Hopefully, as I farm for Sulphite I’ll end up getting a few more over the long run if I don’t end up buying some. Since I feel confident that I can clear these now every time. It is tempting to invest into buying at least enough to finish the inventions that have gotten as drops for more loot. 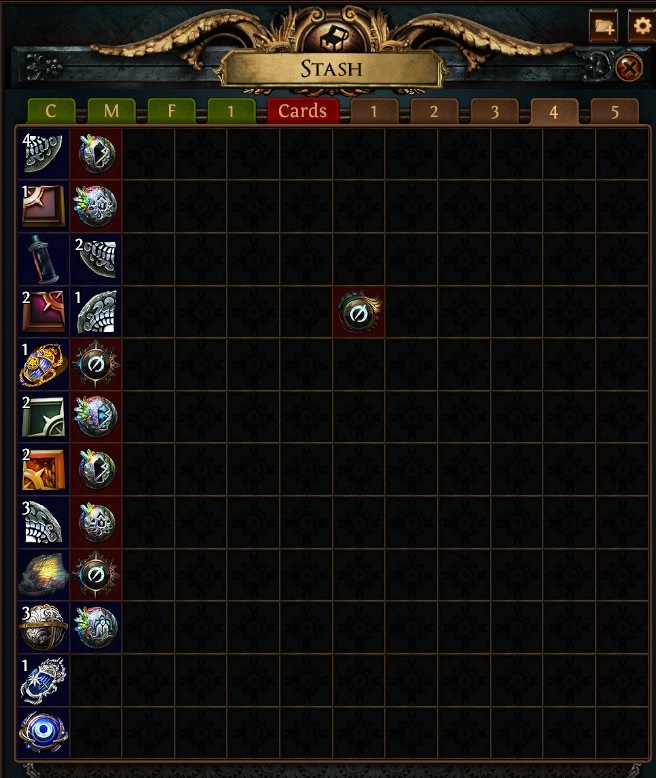 This is the loot I got from killing the guardians and running some Maven inventions I got for the day. For now, I’ll be holding onto the fragments and the Maven’s Writ I made from crescent splinters. I’m not quite sure if I’ll be running any of these or end up selling them.

This part of the day was not particularly profitable with around 556 Chaos (3.83 Exalt) worth of loot. That does not include whatever the value for all the maps I ran was so it's even less. I did end up running some Delve and looting 6 Faceted Fossils that I ended up selling for 2 Exalts as well. 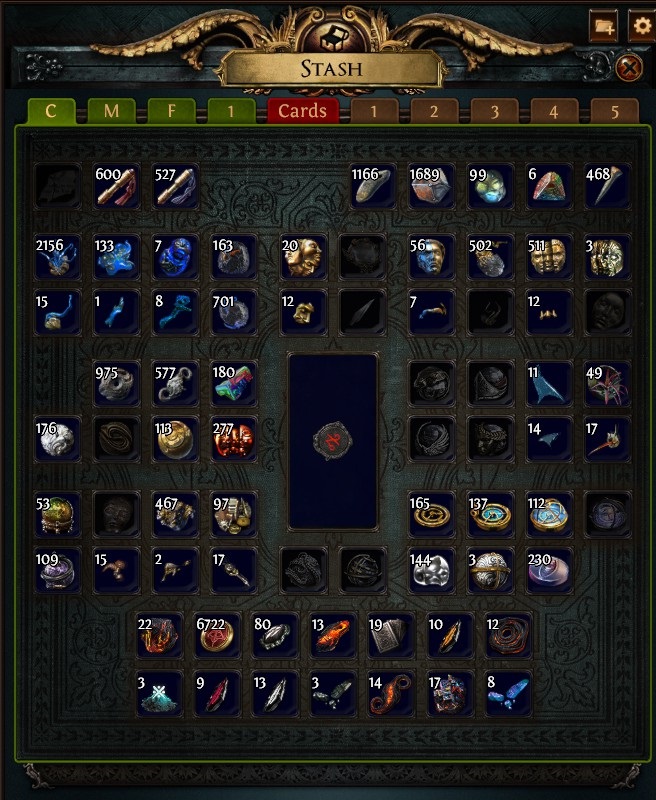 I now have 20 exalts in total putting me roughly 20% towards my goal. There are about 20-30 exalts worth of other stuff I have. A large bulk of that sits in maps and other currencies I hold. At some point when I get closer to my goal, I’ll have to work out some bulk prices and start having a massive map sale.