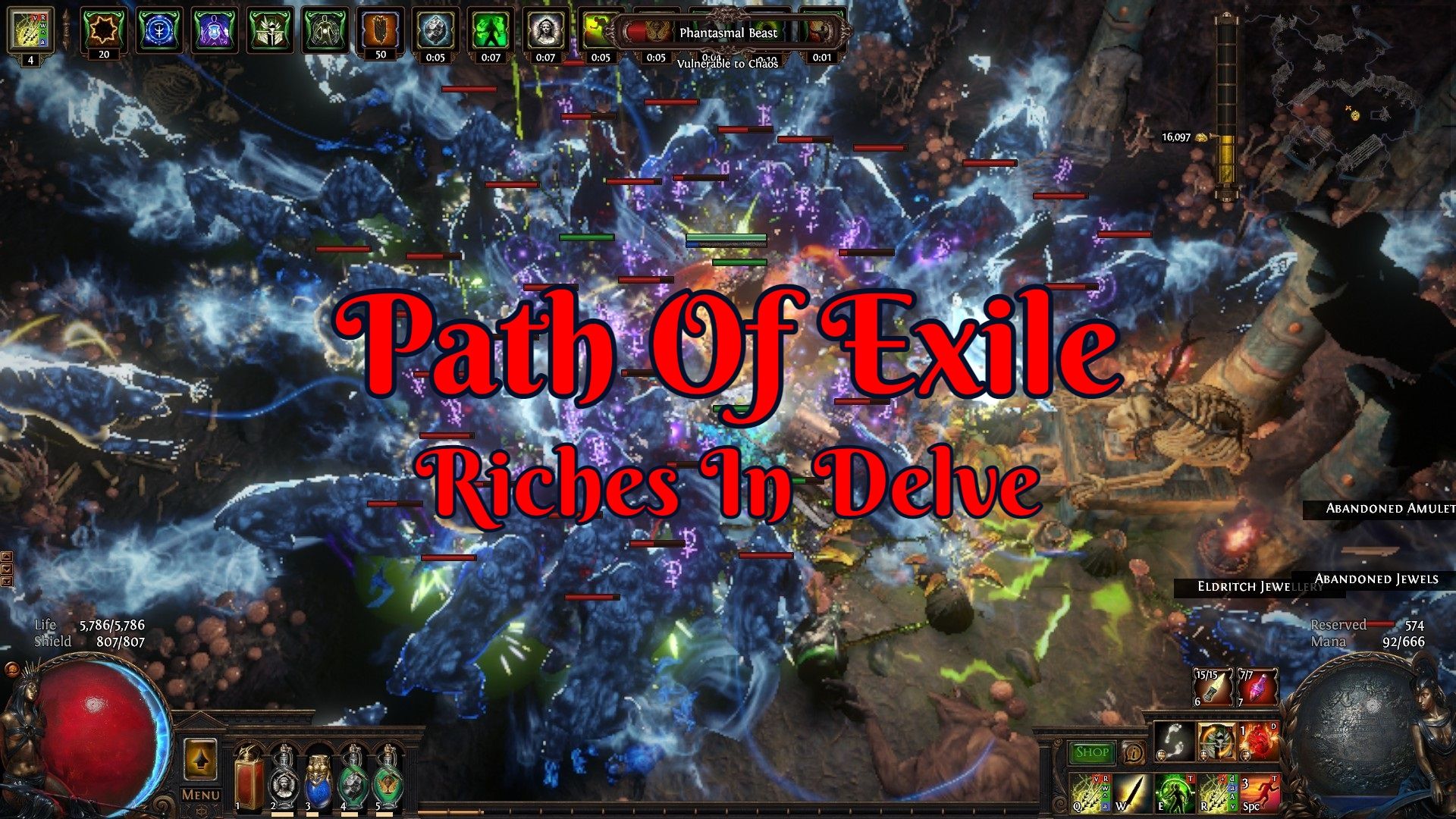 Delve has been extremely good to me in this league. I’m starting to reach depths where I’m seeing more and more of the higher-end resonators and fossils drop. I’m also learning a lot and having a blast. I put my focus on farming maps in Valdo’s Rest for as much Sulphite I can get.

While it’s tempting to buy Winged Sulphite Scarabs off the market from other players to max how many sulphites I can get per map run. I just can’t at least not yet, bring myself to pay those kinds of prices. Even more so when I can get Polished Sulphite Scarabs for one-eighth the price and get a little less. I’ve run enough maps in Valdo’s Rest now that I’ve unlocked quite a few passive skills on that regions tree. I’m at the point where I’ve picked up all the ones for Delve and have moved onto ones for Delirium.

While I’ve never been one to gain a lot of Delirium stacks I have gotten some decent drops in the past. The passives on the skill tree seem to help a lot and I’m hoping to see a nice boost in stacks the next time I get a Delirium spawn. It also seemed like the best to pick up since I did not have anything else Delve related. While exploring down in Delve and finding another city I finally have found The Crystal King’s Throne. It is the hardest boss in Delve if I’m not mistaken. I have not run it or its city. At some point this week I’ll explore the city. The boss however I’m leaving alone at least for now since I’m struggling at taking down lower-tier bosses at that depth.

Since my last Delve update I’ve come across eight cities. There was one 50k Sulphite burn where I did not find a single one making me think my luck of running into them had run out. Thankfully my next trip down I ended up finding two.

Things are starting to get insanely rippy. Some areas I’ll hit nodes now that I simply can’t clear. Other times I’ll come across areas that are so easy I feel I could go away for a while and come back without getting killed.

The nodes I want to farm always end up being blocked by a node I can’t clear it seems with no other way to get to them. There is at least 60 Chaos worth of loot behind this Harbinger event. I’ve died once while attempting it with the fight almost being over. These Harbingers take forever to kill and I tend to try and skip over them if I can. Loot down here in the cities is starting to get quite amazing. Even when the drops are not the best the amount in a drop is starting to increase to a decent size. I’m still waiting for some insane map to drop or having so many on the screen to loot it’s a struggle.

In terms of reaching my goal of depth 500, I am well on my way. I’ve recently hit 438 and I’ve just refilled my Sulphite back up to 54k. I could have been a bit deeper by now if I did not go after so many interesting nodes.

It’s however hard not to want to check out areas that have a high chance of a decent node spawning in them. Even when I don’t find exactly what I was looking for I usually walk away with something of ok value. Not to mention I’ve found a lot of cities that way chasing after a node or area.

I was expecting prices to slip further for the top resonators and fossils. While they do dip once in a while I’ve remained quite steady in my pricing and by the time I’ve restocked on more they are nearing selling out.

Some of the lowest tier of fossils I’m starting to amass quite a few. At some point, I expect anyone who buys in bulk to contact me taking out my entire supply. Far too many people list one or two of these lower-tier fossils. Making my stockpile of 40 scorched or frigid something a large crafter might want even when I’m not the cheapest on the market. 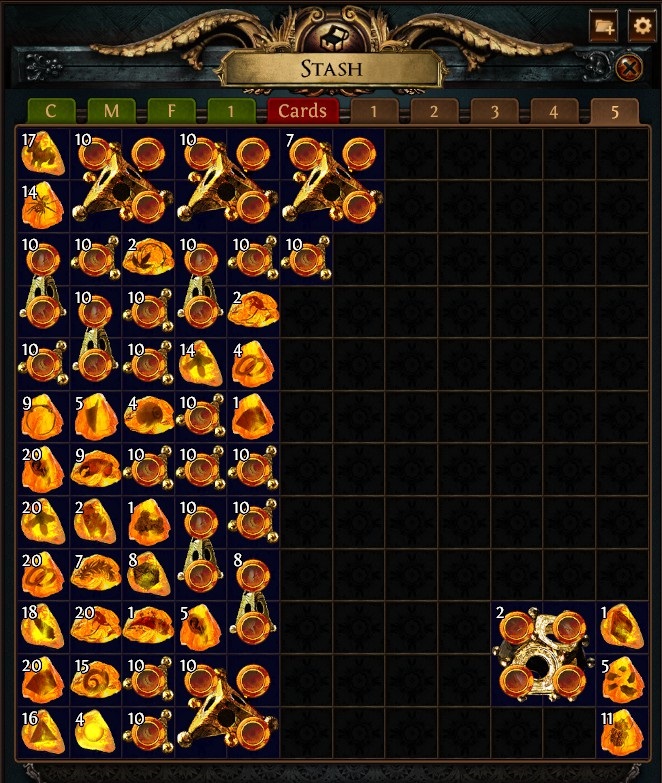 Included farming cities, darkness, and anything else I got running nodes along the way. It was a decent little run. I ended up separating some of the higher valued items into their group off to the bottom right. 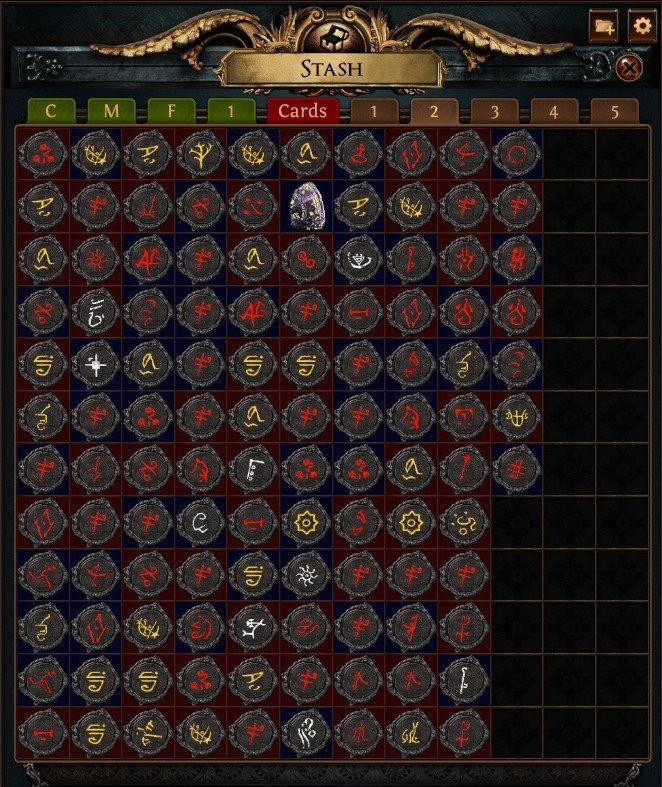 This time around I got 115 maps with 21 of them being tier 16. While I do enjoy taking screenshots of the bulk of the loot I get at the end day. While also working out the total value.

Since I don’t need to sort through the maps anyways. Moving forward I think I’ll just be depositing maps into their proper map tab. Otherwise, it’s a lot of extra clicking in and out of inventory and stash tabs just to move them around for a screenshot. 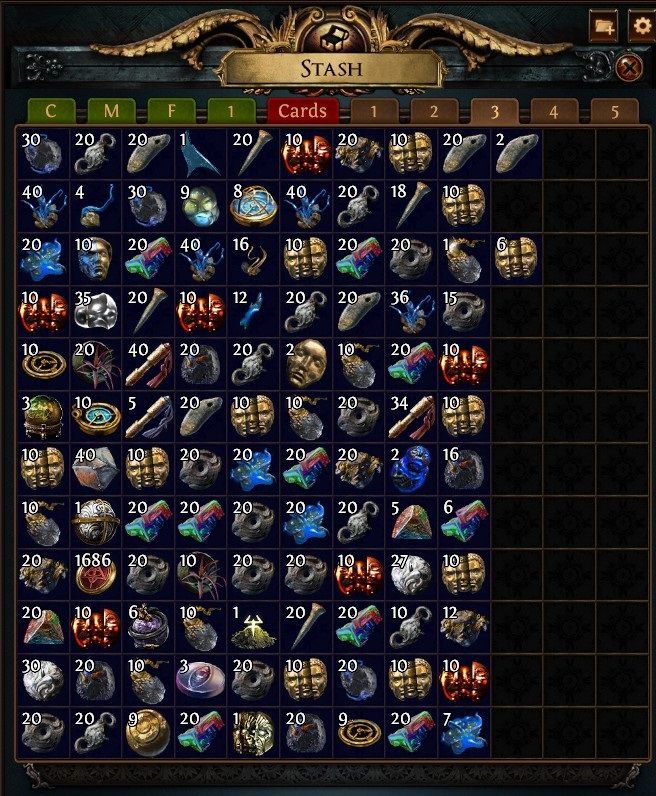 While nothing crazy like an Exalt or better dropped this time around. There is still a lot of value in raw currency. Quite a few Chaos and Vaal orbs among other things.

On the first day, I ended up getting around 1748 chaos or 11.97 Exalt worth of loot. On the second day, I did not have as much time and got 3 Exalts worth. Not a bad haul. Now I just need to sell everything, upscale currency and run a lot more Delve. 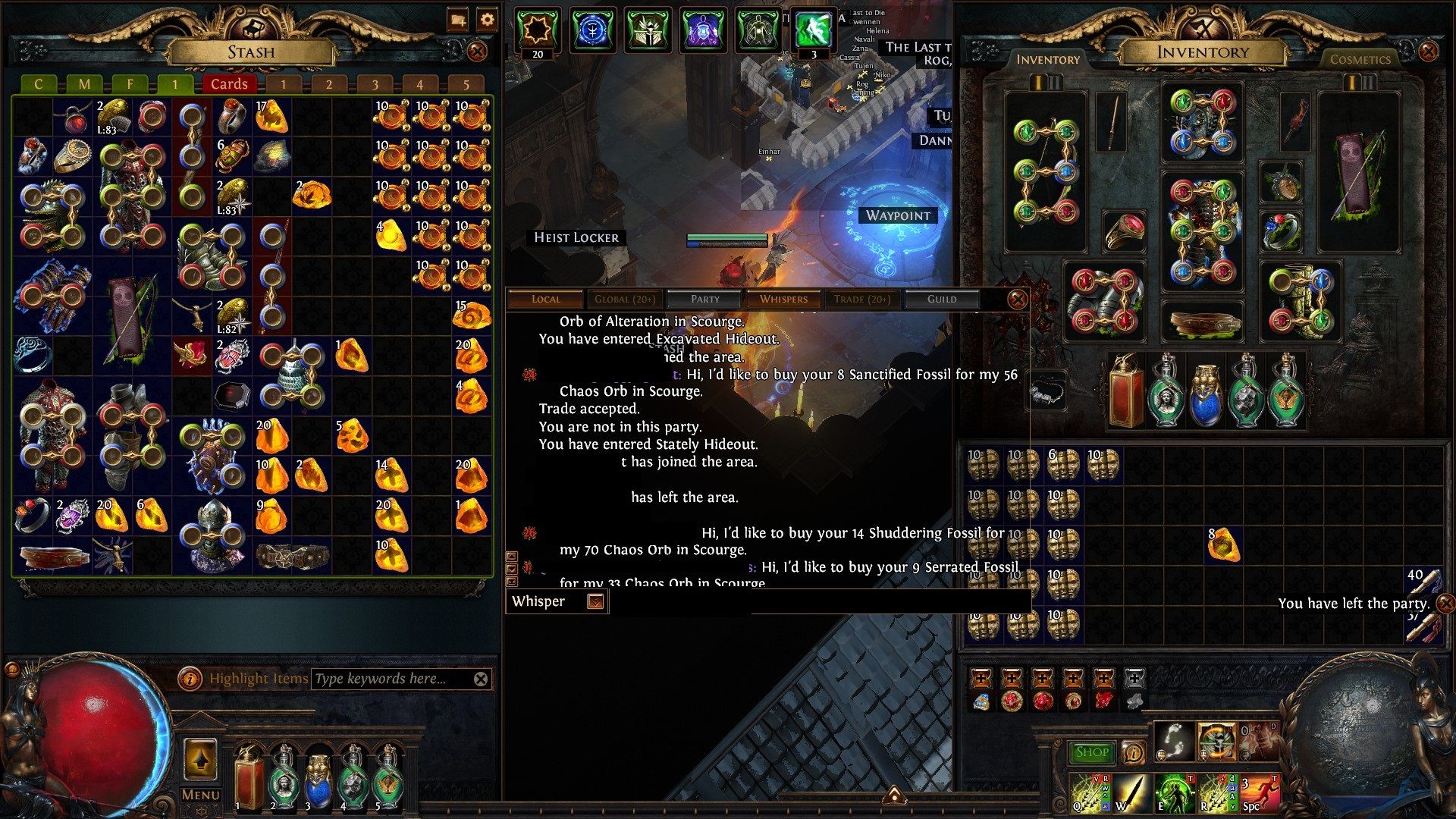 At least for now the bulk of items I’m getting from Delve sell out within a day of acquiring them with a couple of exceptions. A lot of times within half an hour of listing something I’ll start getting people buying up a portion of my supply. Sometimes my hideout turns into quite a busy place and my inventory just fills with Chaos. Outside of spending insane amounts on fancy skill gems there is not much anything else I would want to buy for my main character. I’ve never been the one to set a large high-end item to go after but in this league, I’m feeling up for the challenge. I’ve never had a Headhunter and I want one.

For the moment Headhunters are going for 100 Exalts and who knows where that price is heading by the time I get anywhere near that many Exalts. The build I’m playing I don’t think would go that well with a Headhunter so I’ll have to think about what I would be playing if I end getting one.