Today was a long time coming in Path of Exile. I ended up completing a lot of things for the first time. There were some setbacks along the way. It was however quite worth the journey and amazing times I had along the way.

It was time once again to face against the four Elderslayers: Warlord, Crusader, Hunter, and Redeemer. I’ve run them enough now that I understand each fight. No deaths or even moments where I felt like things were getting dicey.

I’ve yet to loot anything off these Elderslayers that were worth my time. They always drop a couple of special items with bad rolls on them. While most of the items I’m wearing are Hunter items I’ve yet to find an actual upgrade. 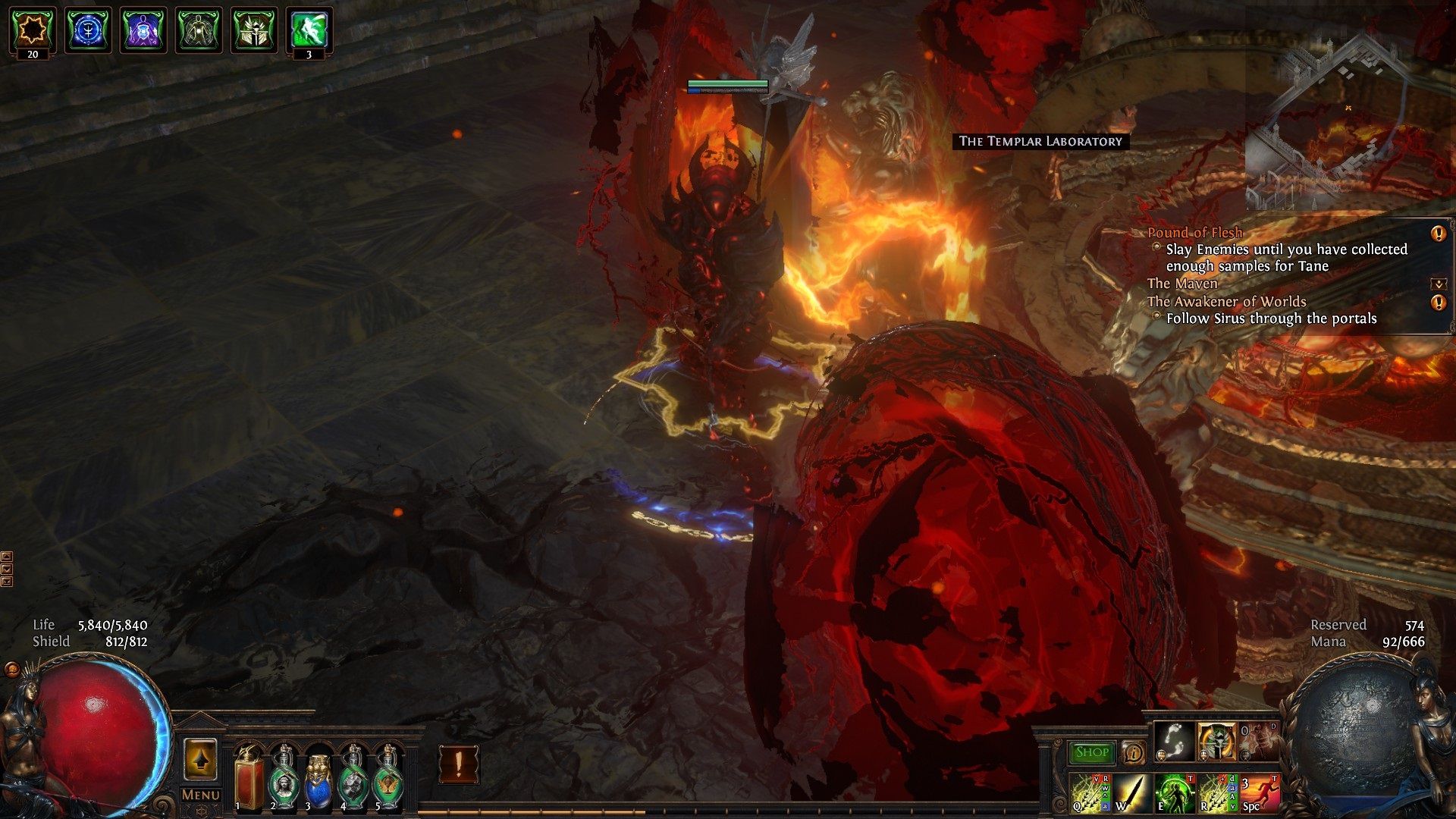 This time around I ended up making a large change to make the fight not as insane for me. While I’ve read that the awakening level was not supposed to have an impact on difficulty. That seems to be either wrong or outdated information. I could also be misinformed about what happened at the end.

I ended up removing the Watchstones out of the Atlas reducing my Awakening level from 8 to 0. While this will have a large impact on the loot from my understanding. I’m just looking for my first win on Sirus before needing to go extreme on him in the future if I choose.

I went into this boss fight excited. While I’ve lost twice to him now. Between my gear improvements, a better understanding of the fight and it hopefully being a bit easier. This could be the time I kill Sirus.

My first death was right before his final stage. It did not end up being a clean fight by any means. I almost thought I somehow messed things up for myself as well. When I headed back in the route I was used to taking for the first two attempts was blocked off by one of those giant death balls.

Thankfully I had another path around. Looks like I might need to pay more attention to how I handle dealing with the extra balls of death that get spawned in. This could have been a result of a mistake I made during the fight of stepping outside of Sirus's circle when dodging one of his attacks.

At one point in the fight, my internet lagged. Something that I’m used to dealing with. It occurred right after the maze was spawned in. As a result, I did not disconnect but I did not get out of the maze in time. To my shock, the damage dealt with me almost but did not kill me. While I did not look I must have had 1 life. Perhaps my energy shield triggered at the exact moment saving me. I may never know. I was also on the last ring almost escaping.

This was also not the only thing I was confused about. For whatever reason since I’ve never unlocked the Uncharted Realms. I thought that happed when I took out Sirus. Thankfully I discovered later in the day just what it took to finally get it. 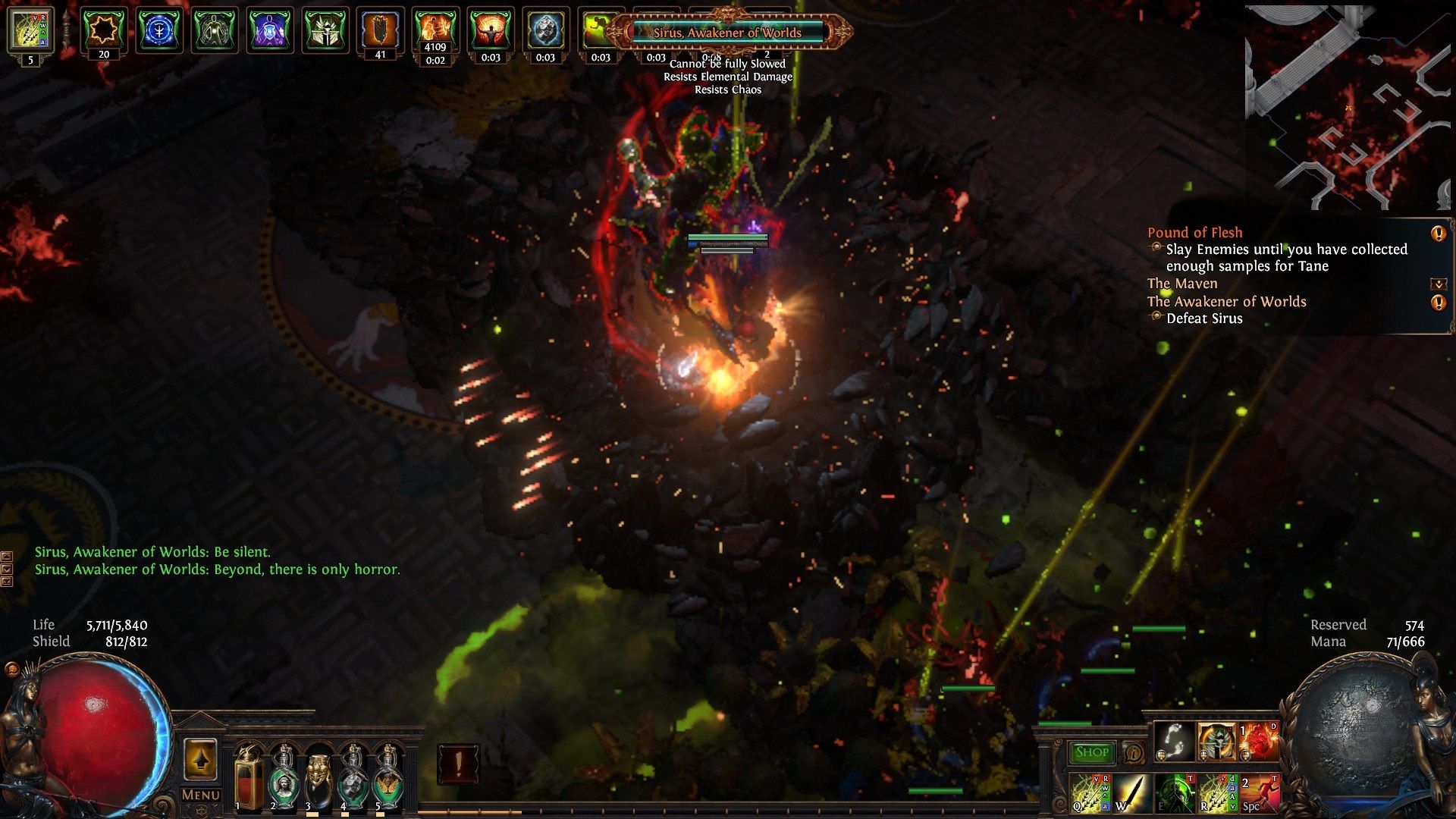 I died one other time during the fight. Otherwise from some mistakes that I can improve on. I was rather happy with how the fight went. I got the win in the end and that was more important than anything else at least for now. The loot was a massive disappointment. I kinds of expected as much. I did lower the awakening level down to zero. Expect strangely I completed an objective for not taking a certain type of damage at awakening level 8? What an odd ending to such an epic fight that took me three tries in total.

While I don’t see myself giving this fight another try for a few days. Next time I’ll see if I can do it at a higher awakening level and see if I even notice a difference. The fight did seem easier. Granted I did more than double my damage as well. These days I’m dealing 5.4 million dps according to Path of Building. I’ve been holding off on running this map for quite some time. In celebration, I decided to run it. While It did not feel as fun as the Synthesis League was back when I played in it. It was at least nice to relive the overall vibe that the league gave.

The place had five special loot boxes scattered all thought out the map. None of them dropped anything noteworthy. The loot overall seemed kind of boring. Which makes sense why this map is not selling for any crazy amount.

Though the price of 75 Chaos that people are selling it makes you wonder if there could be something of note. My only guess outside of needing them for Maven is some of the synthesized drops could have base players are paying a lot for. I’ve yet to loot one of those items and be like “now I get it.” Instead, they are like the item I got I’m trying to sell for 10 Chaos that in a week for now I’ll just trash after lowering its price a few times.

Not to mention the other day I had a Maven’s Invitation: The Forgotten drop. This was one of the five I needed Maven to Witness before I can run it. Perhaps I’ll have the other ones drop at some point and I’ll be able to complete the invitation.

Elder Guardians And The Invitation With Sirus killed and the Augmented Distant Memory map finished. I thought I would take a look at what else I had in my massive stockpile of maps. I had a couple of sets of Elder Guardians: The Eradicator, The Constrictor, The Purifier, The Enslaver. I thought why not end the day by adding even more first-time kills to my belt.

While I have defeated The Constrictor twice in the past as I have two of his shards in my stash. The other three are new to me. They ended up being a bit more of a challenge than I thought they would be for something you can have on a dropped map.

I loaded up my inventory with a full set of them. There were quite a few things I did not know going into this. It’s always fun when you can learn new things in a game all on your own. So running these ended creating an interesting surprise for me. 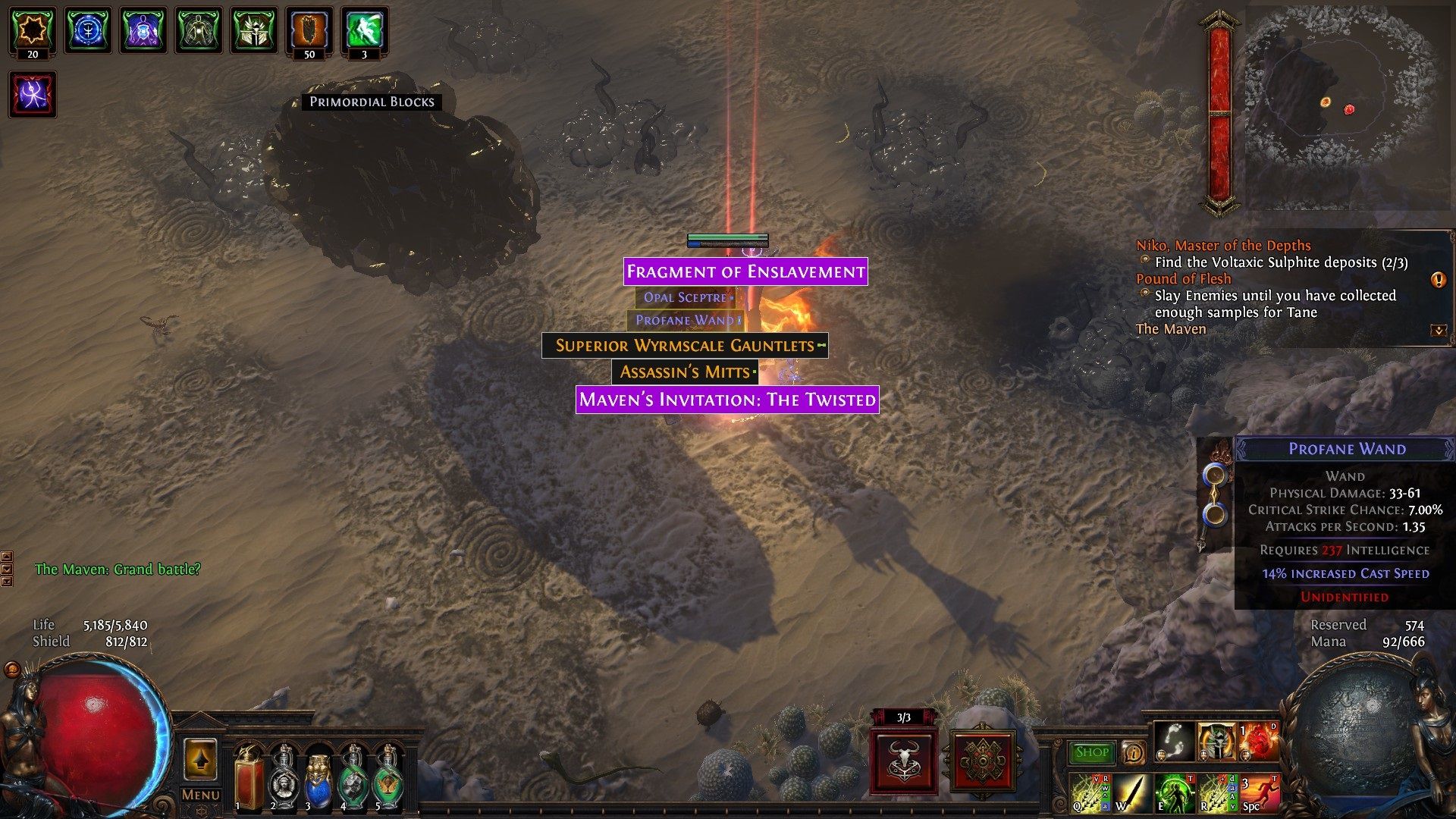 During one of my encounters, I had a Maven’s Invitation: The Twisted drop. These things go for 40 Chaos each and require you to kill with Maven watching each of the Elder Guardians. It’s a good thing I did not disable that in the Atlas. I thought why not.

After killing all four of them and getting a fragment drop from each. I proceeded to give the Invitation I had a try. Before I got one of them down the first counter ran out and the other Elder Guardians started to spawn in.

I was no match for them. After a few deaths, I came up with a hit-and-run strategy to take advantage of the shape of the area. I got them all down but one. It just had a sliver of life left and I died. It was also my last portal so I ended up falling just short.

Between the four special maps and the Invitation, it was around 112 Chaos worth of materials. Thankfully I had at least looted some fragments to help cover some of my losses. It was however not the best feeling ever. At least I did not have to buy anything as I already had this stuff laying around in my Stash.

I decided since I still had more of the Elder Guardians maps to run I’d make another attempt at it. I even considered the fact that if another Invitation for this does not drop I’d just buy one. I ended up lucking out and had two Maven’s Invitation: The Twisted drop on separate fights while killing the Elder Guardians.

I also made some slight changes to both the Invitation and my awakening level to make the fight a bit of an easier one. I just wanted to see what happened after defeating them. I had more I could always run in the future if I wanted to attempt it for a chance at better loot.

It was still quite the struggle. With how small of an area Toxic Rain is even hitting I’m starting to feel this is not the best build for a fight like this. I took my time and played it safe when I needed it; instead of, trying to push for landing damage on anything. I ended up defeating it without a single death on my part. The loot ended up being better than I was expecting. Between all fragments, I had looted, and inventions I had gotten along the way. This ended up being a net positive venture with the three Crescent Splinters helping edge things into the green. 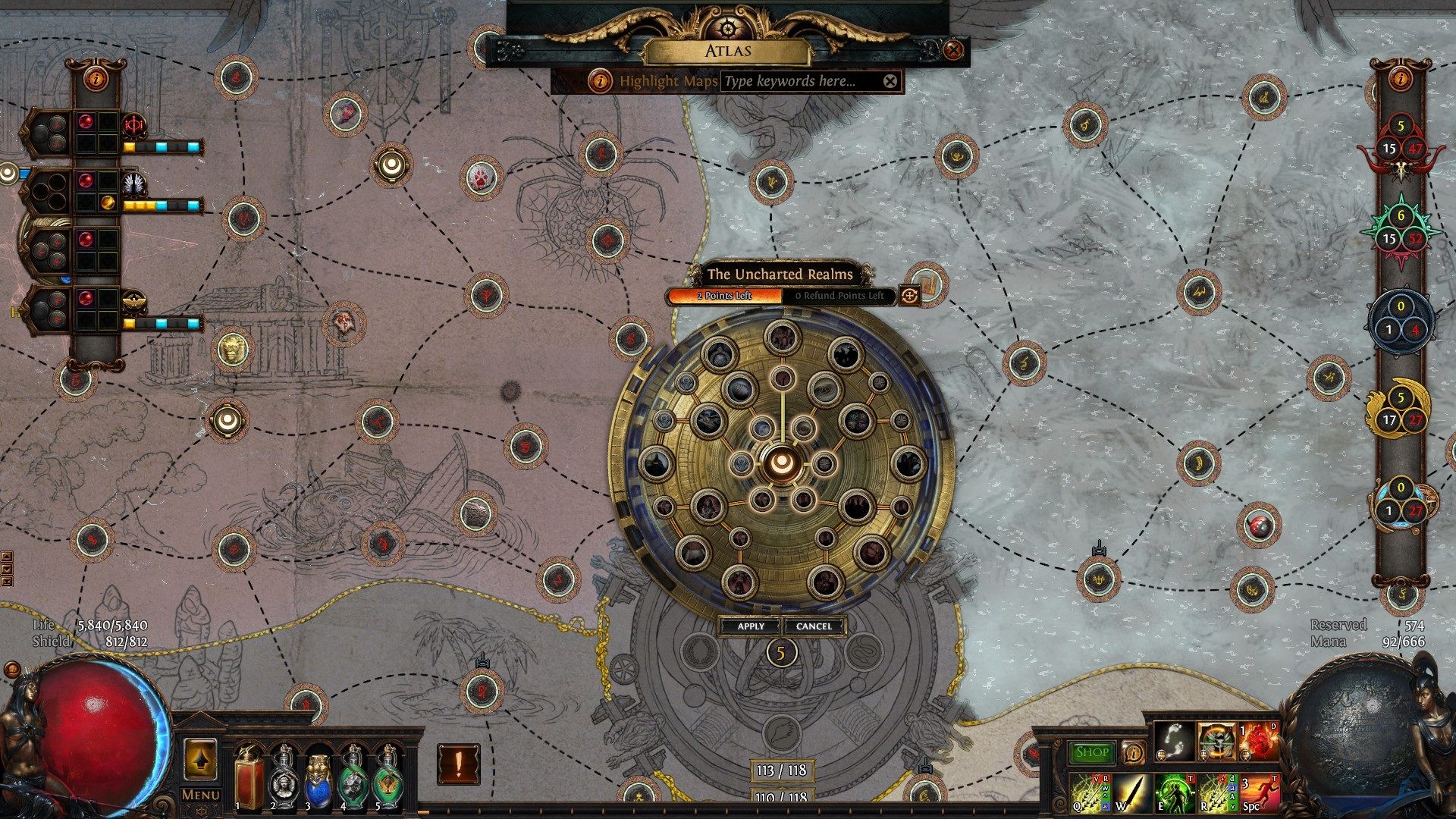 This also achieved something I have been wanting to do for a while now but not fully understanding how. It unlocked The Uncharted Realms Atlas passives. I’m not quite sure where I want to spend my two points just yet. There seem to be some quite interesting options. This checked quite a few things off my list of things I’ve never done or beaten. I’m not sure yet what my next big targets should be to go after. I do know I have a fair amount of things to do in Delve and I’m looking rather forward to spending a few hours down there.