I had almost forgotten something rather insane can occur in Delve. I’ve always wondered how large of a city could I get down there. That almost becomes irrelevant when you get a cluster of cites.

I have no idea if this can start occurring a lot due to the depth that I’m at. If all of what I’ve found is considered to be in a single cluster or multiple clusters. In the past, I’ve had two cities spawn next to each other or within several nodes. It was nothing like this.

I was trying to burn my Sulphite as fast as I could so I could get back to running maps and working on my passive skill trees for the different regions on the Atlas map. Things were going great as I was in the 310 depths of Delve and it looked like I had already found another city. This city however was a bit odder than what I usually find. Outside of there being three boss fights, you might notice there are technically five different cities in this cluster from how close I was.

Knowing that this was something special I didn’t just want to dive right into the city and start clearing it out. I had no idea how many chambers or even other cities could be inside this cluster.

I decided that I would try and go around as much as possible first. I wanted a “clean” screenshot to remember this special occasion. I wanted to see all the different icons of the different chambers without wrecking them by clearing through them first.

So I loaded up on around 50k Sulphite per trip and went down exploring around the city cluster I had found. I needed to run lots of maps anyways and this was just a great excuse to burn lots of Sulphite. Not to mention I was more than likely going to be farming in the 300ish depth range moving forward anyway in Delve.

There were also a few nodes I wanted to farm in the area. Some of the biodomes in the area can have a 20 or 40 Chaos Fossil in them if you are really lucky. Some of these nodes ended up dropping 10 to 25 Chaos worth of items from a single node in some instances even without dropping some best fossils in Delve. All around it was a lot of fun. 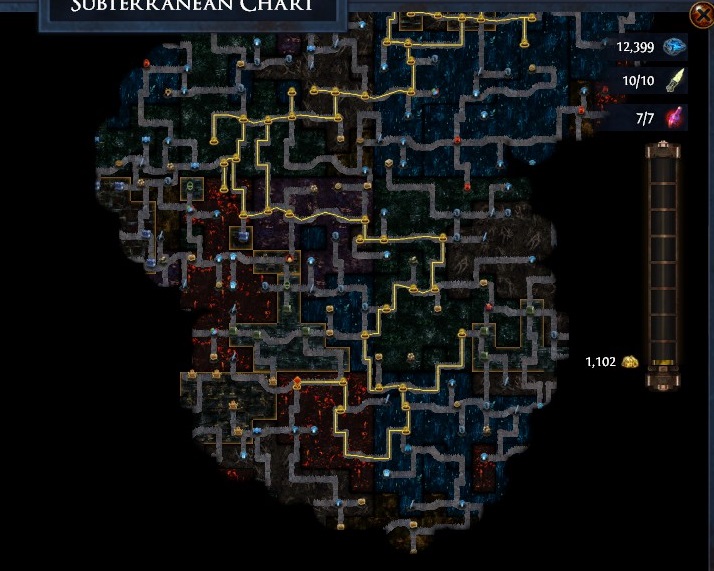 After some exploration, I came across another city to the east. I’m not sure since there was that giant abyss splitting things up if this is still considered part of the “cluster” or not. I was just thrilled I had uncovered even more chambers. The eastern city ended up being two different cities. You can also tell from exploring more northwest I had undiscovered another cite above the main cluster. You can also see this was all not that far from a city in the northeast that I had just finished before coming across this insanity. I discovered a single node gap between a big chunk of the main cluster. I decided to save some Sulphite and use it as a route to try and uncover the remaining parts as I could. This thing is just massive with 6 different cities and four boss fights in the main cluster.

I decided to first clear the eastern cities that were divided from the main cluster by that giant abyss in the middle. With some of these chambers being in the 320 depth range they were much deeper than the ones I struggled to clear on day 23 and 24.

Since I had made some improvements to my gear increasing my damage and survivability they ended up feeling like less of a challenge. If I’m not mistaken these chambers are one tier lower than the ones I was struggling with. While there were a lot of nice drops in the form of currency and maps that I would have been happy with. I ended up getting a Synthesised chest to drop. I don’t know what base types I’m looking for and from the best I could tell this was not it. After that I started to give some of the boss fights a try. The Vaal one I know I can clear without much of an issue. The Lich’s Tomb type I have yet to defeat and it looks like I was not going to for that day. So I did my best to go around them since if you don’t clear them they remain even if you fail to kill them. The city up to the north ended up being a bit of a disappointment. There was a Lich’s Tomb right in the middle of the three chambers. Which since I can’t defeat that boss just yet. It ends up blocking my access to one of the chambers.

The one I did clear dropped rather substandard items. At least I got a few lower-tier fossils along the way. Nothing of high value though. The main cluster of cities ended up being quite the wild ride. I ended up filling my inventory quite a few times over with loot. One of the drops I got was a Windripper and while it was nothing special I got an easy 45 Chaos for it. 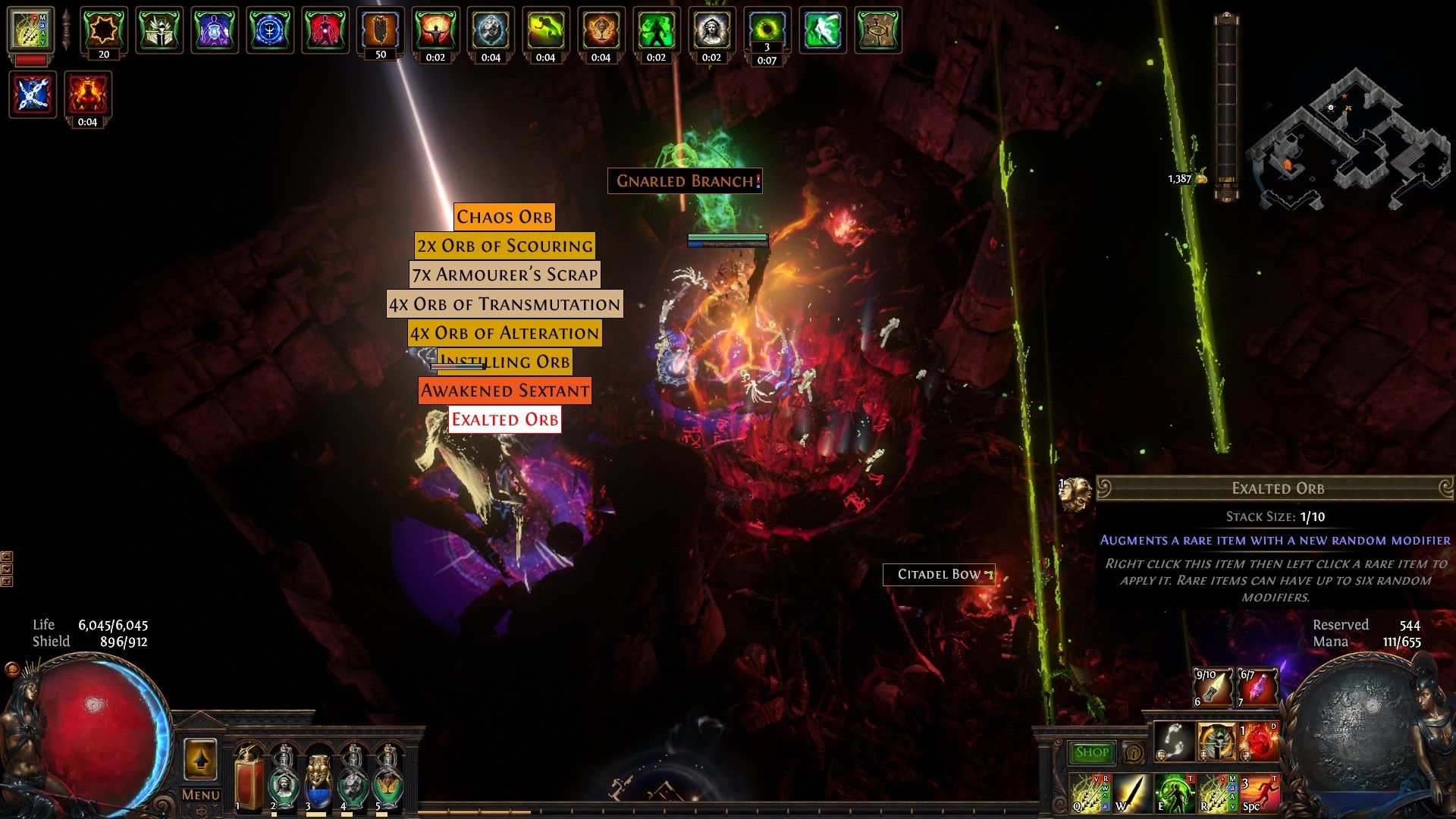 I also found another Exalt. This is starting to be the league of Exalt drops for me. I think this is my fourth one now? Either way, I’m quite shocked at the rate I keep finding them. Who knows how many more I could end up finding this league being at this kind of depth in Delve.

After I had finished off the main city with only one death. I spent what Sulphite I had cleared to some interesting nodes I could see in the area. Even without farming a city or in the darkness I’ve started to learn and spot interesting things I should be going after at these depths. One of them happened to drop this 40 Chaos fossil. I also found some Fractured and glyphic fossils. With how few of these I’ve ever gotten I listed them higher than the average price and ended up selling them.

Since I already had a lot of Delve loot. I thought why not farm all the darkness I had sitting around. It would save me time in trying to sort, price check, and sell things anyway doing it all at once in bulk. While it was only from 294 to 323 depth I was farming a lot more sideways on the map to reach different cities and if I uncovered the tile for a certain biodome I was looking to explore I would map it out further. So there was a lot of it to search for hidden walls in.

I even ended up discovering yet another city. I had spotted a node I wanted to check out and happened to uncover it. It ended up having six chambers in it. That in itself would have made the trip to it more than worthwhile.

This adventure ended up producing so much loot I have found myself with an almost full stash after I had finished. The three tabs I had cleared out for this were not enough. I ended up removing a lot of the lower value currency and banking it into my main currency tab. I’m still finding loot I got down there in other tabs as I work on cleaning things back up. I ended up looting so many maps they did not all fit into a single standard stash tab. In total, I had 151 maps, 98 red, 39 Tier 16, and 2 unique. Even at a rough guess at over 33 0Chaos worth that is a lot. I’m considering getting into selling maps in bulk. Delve is just giving me insane amounts. I had so many currencies drops every so often I had to search the tab and remove a lot of the lower valued ones. Between looting an Exalt, 112 Chaos Orbs, and everything else there is around 422 Chaos worth of currency. Finally, the resonators, fossils, and some of the overflow from the other tabs. Some of the stuff in there ended up being junk. While other things I’m still trying to sell. Between just the fossils and resonators there is 763 Chaos worth.

Including everything even the oddball stuff that was not included above. I looted 1,613 Chaos worth of loot or 11.12 Exalts worth. Not including anything that I’ve kept I only have 70 Chaos worth of loot left that I’m trying to sell. Along with a lot of currencies that I’m still working on upscaling. I can’t wait to go deeper into Delve and explore a lot more areas I have my eye on. If I could just up my damage a bit more so my dots are killing much faster it would make clearing and running Delve a lot easier.

For now, I have a lot more Sulphites to farm. I’m also rather glad to get a lot of my storage space back. If this keeps up the way they are going I’ll have to stop mid-farming to tally things and sell just to make room for more farming.