It had been several days since I’ve run some of the Heist contracts that were now starting to stack up. This was further compounded by the fact that I took the Heist passives in the Lira Arthain region on the Atlas map. I had been running a lot of maps in that region netting me 64 normal Heists and 6 Grand Heists to run.

Heists tend to drop a lot of currency and since I was rather broke from the spending spree I went over the past few days this should end up being a nice boost to my stack. These also tend to be rather safe to run and I ended up getting a decent chunk of a level out of it as well.

While you always hope for something massive to drop that ended up not being the case. I still had a lot of fun though and with 64 normal heist maps to run there was a lot of loot to be found regardless. Normal Heists tend to be great for grinding for Rogue’s Marker that I would then spend on Grand Heists unlocking wings and side areas if needed.

The bulk of the normal Heist contracts I had were not that great. While all but one of them were level 80+. I did not get a lot that had currency or accessory chests in them. The dream of finding a Headhunter or Mageblood would have to be for another day. I did end up getting a surprising amount of Chaos Orbs to drop. For these normal Heists, that is all you need to walk away as a winner. I do feel I’m at a point now in this league where I might rush through some of the better contracts moving forward and skipping the rest.

I’m at a point now where I have many other things I can do that have a much higher risk to reward possibilities. Outside of getting some very rare item in Heist the average amount of loot I was pulling in was not that great. I at least got a lot of experience.

From running 64 normal Heist contracts I ended up getting 94k Rogue’s Markers and spending around 21k on hiring crew and the Heist guild taking it cut. Yet again Stacked Decks, Rouge’s Markers, and raw Chaos ended up being the highest earners from all the loot I got. Netting me a bit over 1k Chaos in profit. 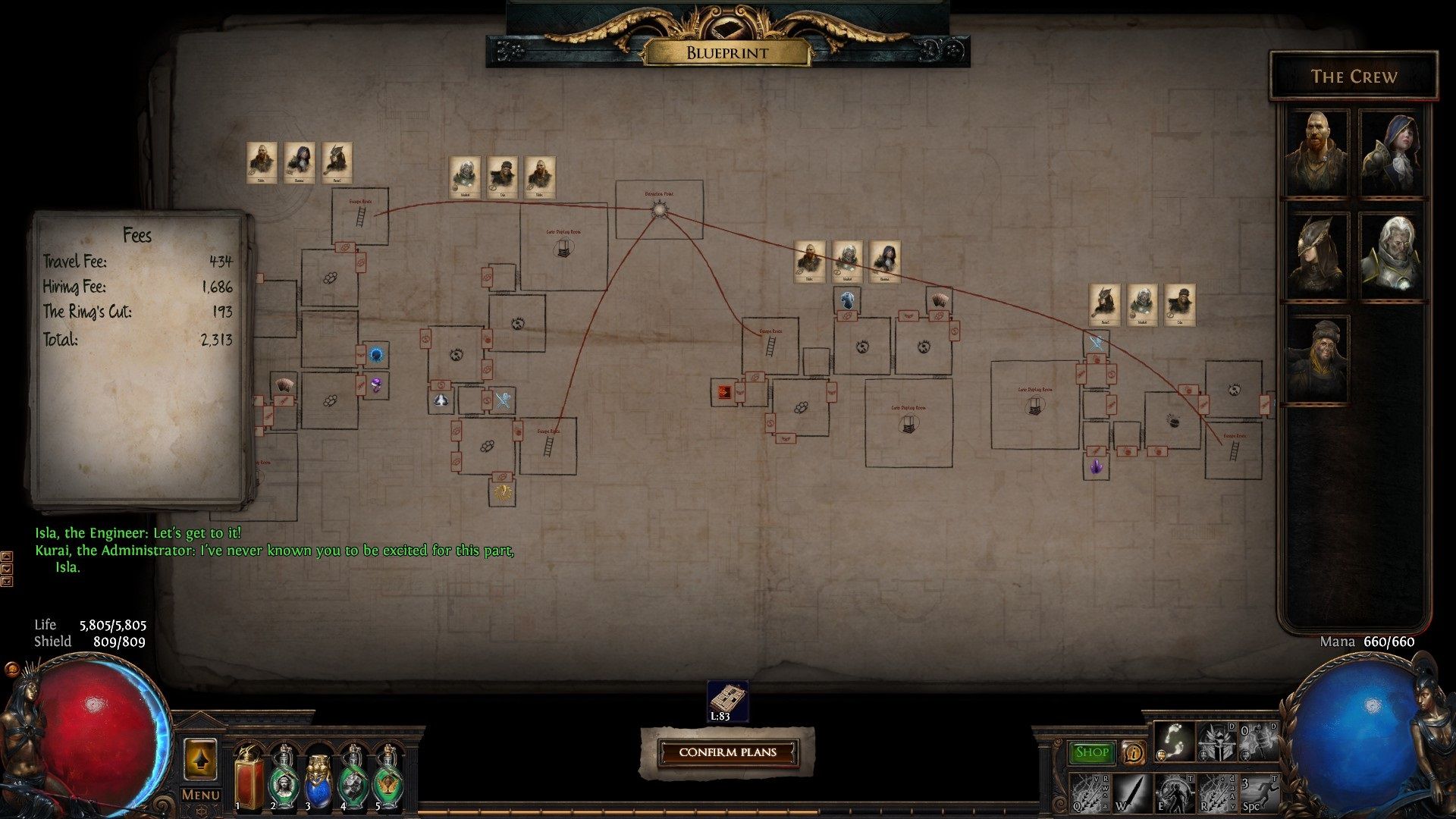 Once they were all done it was time to move on to Grand Heists. These involved a lot more risk as you pay for extra wings or unlock rooms within each Heist itself. The target is no longer something you get to sell for some Rogue’s Markers either. 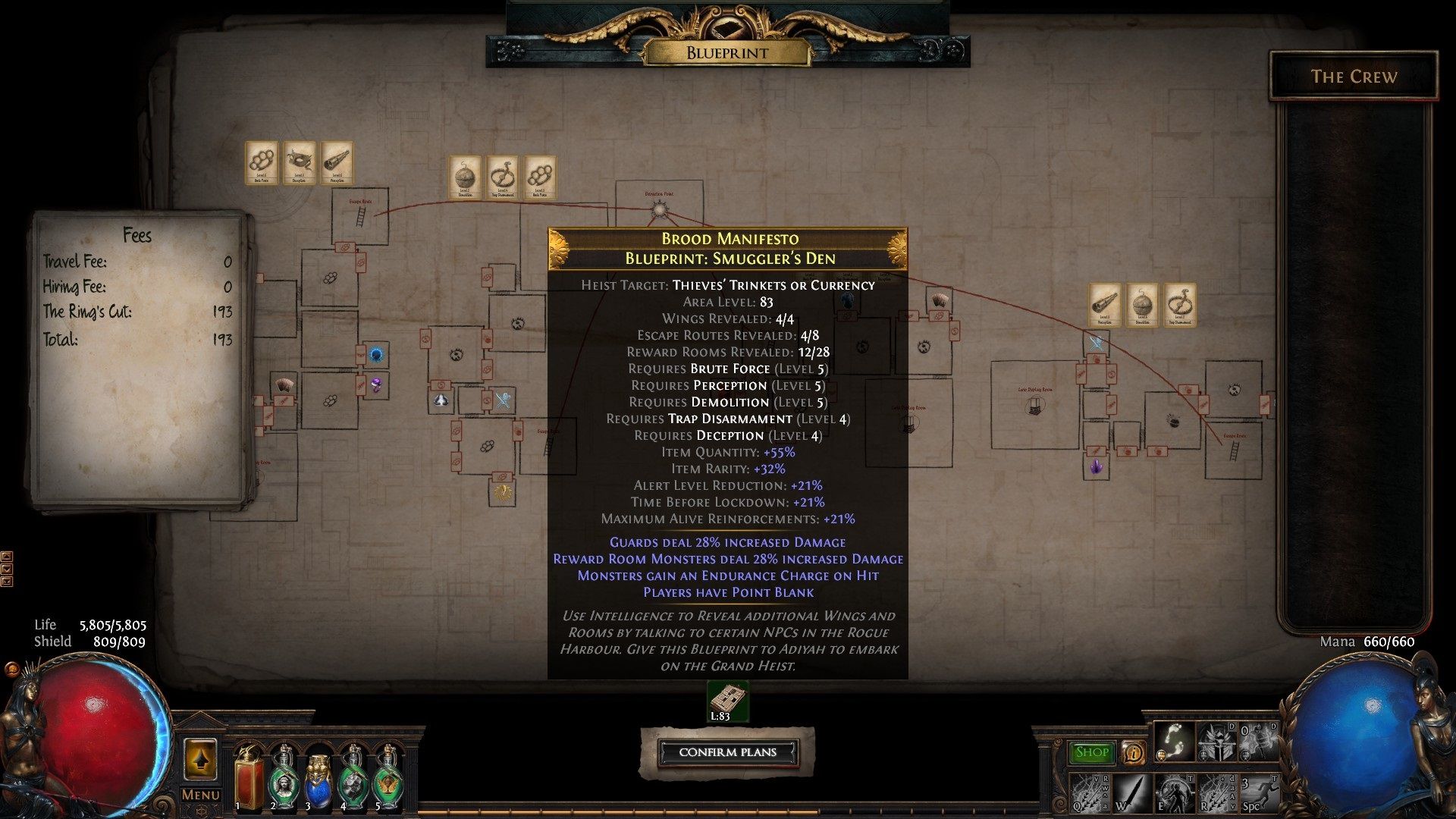 Of the six contracts I had, three of them were once I was willing to take a bigger gamble on and spend a fair amount of Rouge’s Markers on. Two of them were thieves’ trinkets or currency and the third replicas or experiment items. Everything else was enchanted armaments which I’m not a fan of trying to sell those items. There are a lot of unique items in Path of Exile that have replicas that are slightly different than the original. Some of them sell for a lot more and others just a fraction of the price depending on the item itself. None of the ones I got as a final reward were worth much of anything.

I oddly enough ended up taking the Micro-Distillery rare Belt. First time seeing an item like that. It’s a shame you lose a flask slot for using it. I guess the wearer must be quite drunk. It was also from my best guess the highest value item I had between my choices.

Wish I could say I had better luck on the Grand Heists with thieves’ trinket or currency as the main target to steal. Lady luck must have stepped out for lunch while I was running these. Not only did I not get a single delirium orb sometimes the best option was just 10 fusings. The best one I ended up getting was a display case holding eight stacked decks. I guess I can say those decks are starting to save my runs. While they are only one and half chaos each it was way better than any of my other choices.

Grand Heists did end up bringing me 437 Chaos worth of loot for running six of them. The cost of 156 Chaos worth of Rogue’s Markers spent on them ate quite heavy into the profits. I’m just glad I was not underwater on running them.

It looks like I might need to readjust the amount of risk I’m looking to take on Grand Heists as far as spending Rouge’s Markers on them. Then again, all it would have taken would be a couple of Delirium orbs or an exalt dropping and suddenly it would have been quite a smart risk to take. I did end up filling over two stash tabs worth of loot. Since things were already getting rather full in my storage again. I ended up banking some of the lower valued items along with trashing anything not worth selling or keeping. In total after costs, I looted 1,285 Chaos worth of loot which is around 8.86 Exalts. I looted 190 stacked decks, 133 chaos orbs, 10 exalted shards, 2 ancient orbs, 12 awakened sextants, and a lot of different scarabs among many other items. 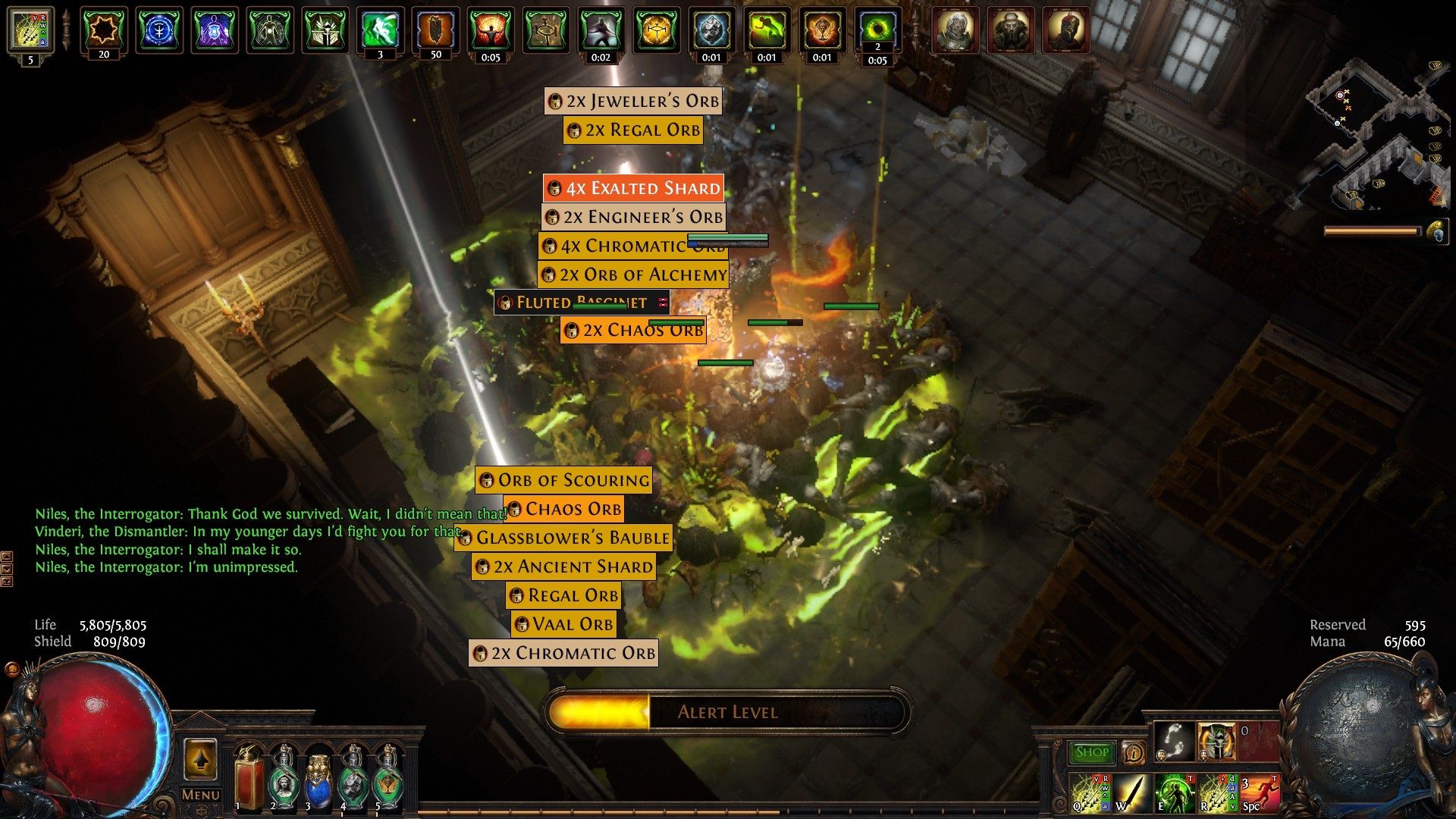 All that is left now is for me to go through my two tabs worth of loot and sort and sell the items. Something I've left for another day after running 64 Heists and 6 Grand Heists.